Wheeler Dealers fans will know that this isn’t the first time the brilliant Mazda MX-5 has appeared on the show. Back in Series 3, host Mike Brewer and then mechanic Edd China tackled a first-generation NA model, but now Mike was after something even more special.

Owner Jake was ready to sell his 2004 Mazda speed MX-5, a limited-production car that boasted a range of upgrades including a turbocharged engine producing a tasty 178bhp. Good for 0-60mph in just 6.7 seconds, and with an asking price of $7300, it certainly got Mike’s attention. It was rare, too, with only around 5400 examples sold in the US. 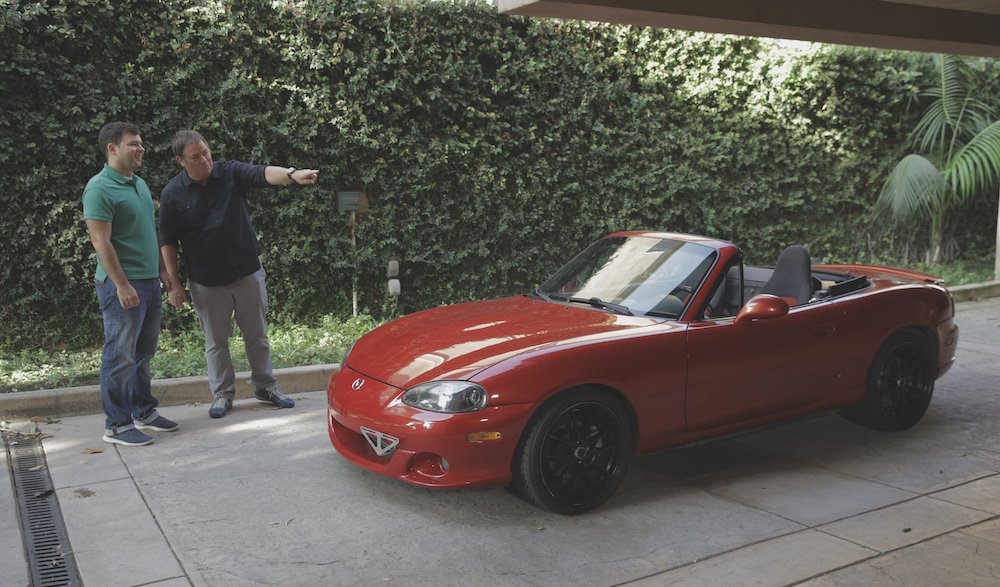 A test drive along the Pacific Coast Highway revealed a few issues, but agreeing on $6500, it looked like our favourite wheeler dealers had bagged a bargain.

Mechanic Ant Anstead was impressed, too, and the list of jobs to do didn’t appear too long. The most serious was an oil leak from the gearbox, but Mike also wanted to tackle the noisy turbo dump valve, the irritating position of the boost gauge, and source original ‘Racing Hart’ alloy wheels to replace the aftermarket items. It was time to get stuck in…

Gearbox first, then, and having identified the leaks Ant knew it would have to be removed to cure the problem. Cue a long list of parts to be taken off the little roadster, including the centre console, undertrays, body shell bracing, prop shaft and exhaust. 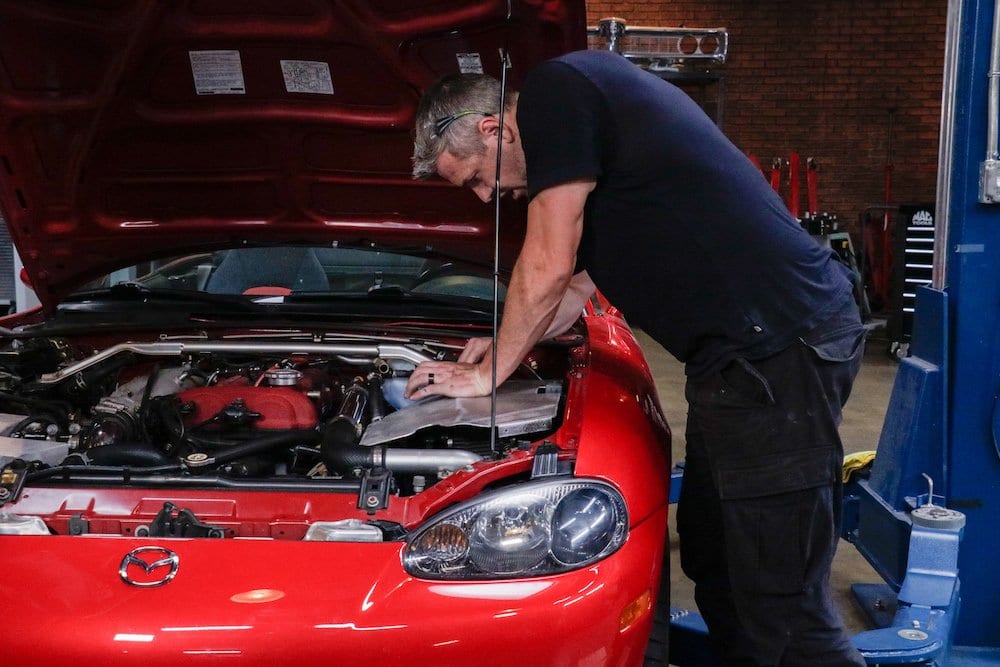 The problem? The wrong sealant had been used between sections of the gearbox, so after separating them and checking the internals for wear, it was just a case of carefully applying the right Mazda-recommended product. It was cheap, too, at around a tenner. A clever trick with fishing wire – to keep the reverse gear pivot arm in place – helped with re-assembly, and the car was also treated to a lightweight flywheel and new clutch at a cost of $764.

On to the noisy turbocharger dump valve that had so annoyed Mike on his test drive, and rather than replace the aftermarket part, Ant had a typically innovative solution. He made a box out of sheet aluminium and welded in some baffles to deaden the sound, and once fitted it was problem solved. He also relocated the air filter to the front of the engine bay, surrounding that with another tailor-made box, and with both items powder-coated in red the finished job looked terrific. An adjustable turbo boost controller mounted in the glovebox was the finishing touch.

Next was some exterior detailing, which included getting rid of the rear light unit surrounds which looked out of place, and Ant had a neat fix for the boost gauge, too. Removing it from the A-pillar and fitting an original trim was straightforward, but the clever bit was relocating the gauge to within the air vent at the end of the dashboard. Perfect! 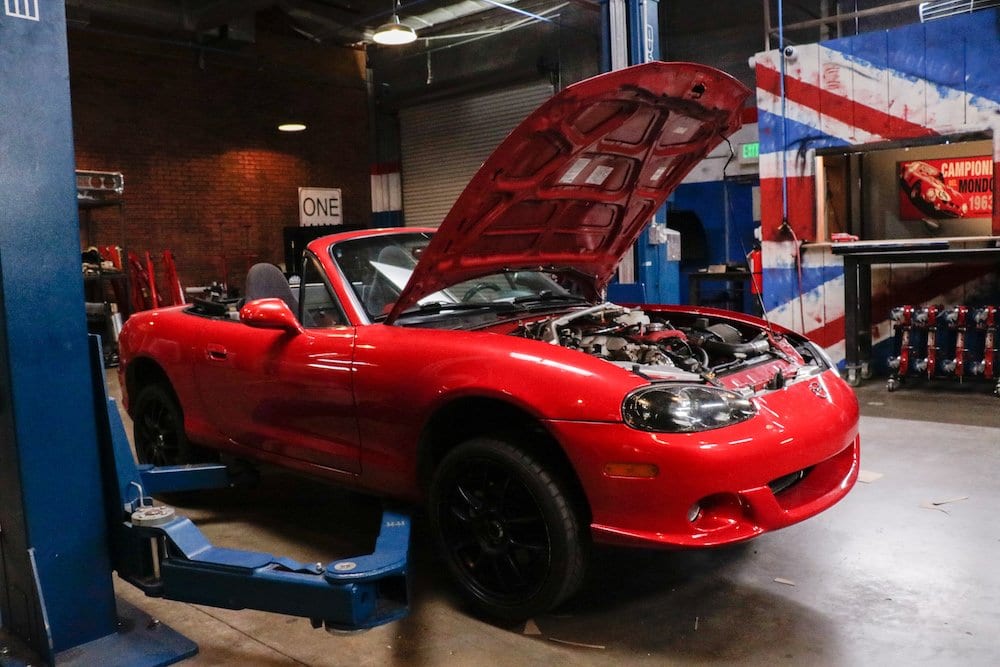 There was just one last thing that needed attention – the wheels. Mike wasn’t a fan of the aftermarket items, but would he be able to track down a set of the rare originals? Hitting the road, he was off to see some racing drivers with MX-5s and he found Brian who just happened to have a set for sale. At $800 the deal was done and this brilliant little sports cars was finished.

The total cost of the project? $8869, or around £6800. Back on the Pacific Coast Highway, the test drive revealed a proper transformation, the MX-5 performing and sounding just as it should.

“There’s no better fun than to make Ant feel sick on the winding Malibu canyon roads,” laughs Mike. “He only barfed once so not too bad, but at least it’s better than letting him drive or they would still be digging us out the hill side!” 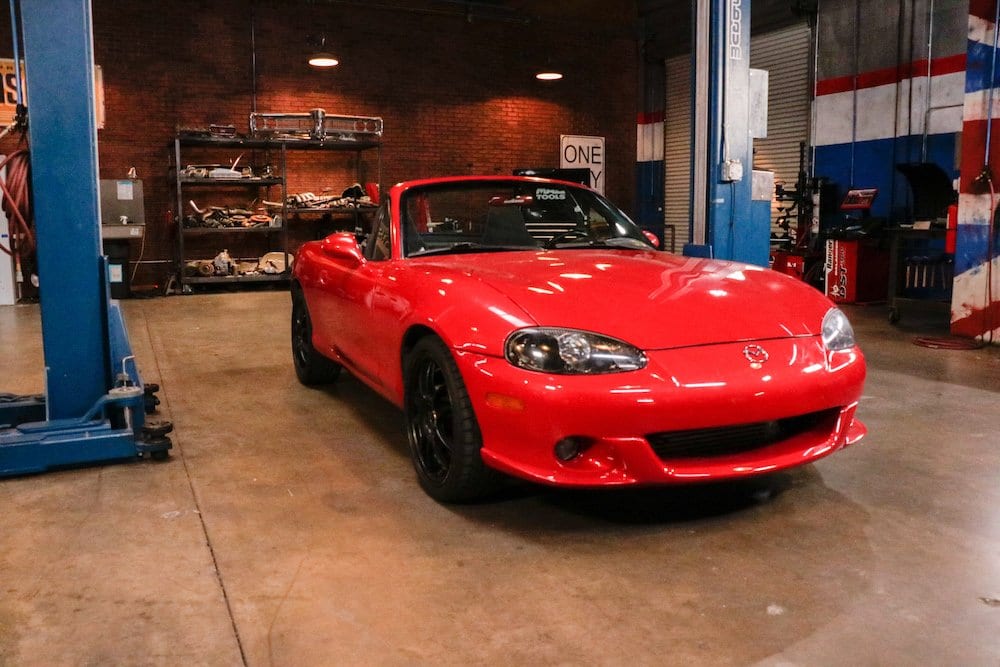 Finding a buyer wasn’t going to be difficult and in fact it turns out the Mazda speed MX-5 would end up being a nice birthday present for 18-year-old Alex from his mum at the price of $9500 or £7400.

Mike adds: “The irony is that he’s likely to undo all the work we done to it and Chav it back up! Oh well!

“The Mazda speed is one of those fantastic cars than can trace it’s heritage back to the best of British and it was a delight to have it in the Wheeler Dealers shop.

“Oh and did anyone notice that the blow-off valve cover Ant fabricated was the same shape of the map of Texas?”