Do you remember the comedy or the cars? 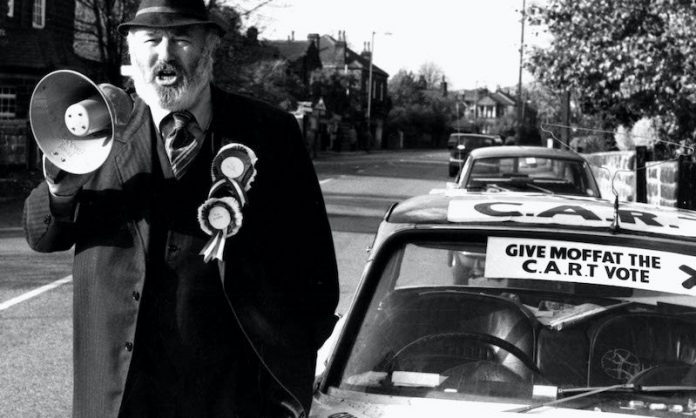 You may not immediately think of the cars when you remember the classic comedy shows you watched 40 years ago, but there were an incredible number of vehicles featured throughout the decade. Here’s our friends at Lancaster Insurance’s Best of ’80s British TV Comedy Cars

This is another ‘Top Ten’ that could easily have become a ‘Top One Hundred’ but we finally managed to narrow down our selection of British TV Comedy Cars. We have already covered the Reliants of Only Fools and Horses, George and Mildred ended in 1979, while Home James and The Bottle Boys were all immediately rejected on the grounds of dreadfulness. Nor was Howard’s Way actually intended as a comedy. However, watch out later in the year for another list with the Morris Minor 1000 from Open All Hours, the Ford Mustang from Just Good Friends, the Fiat 500 from Dear John… 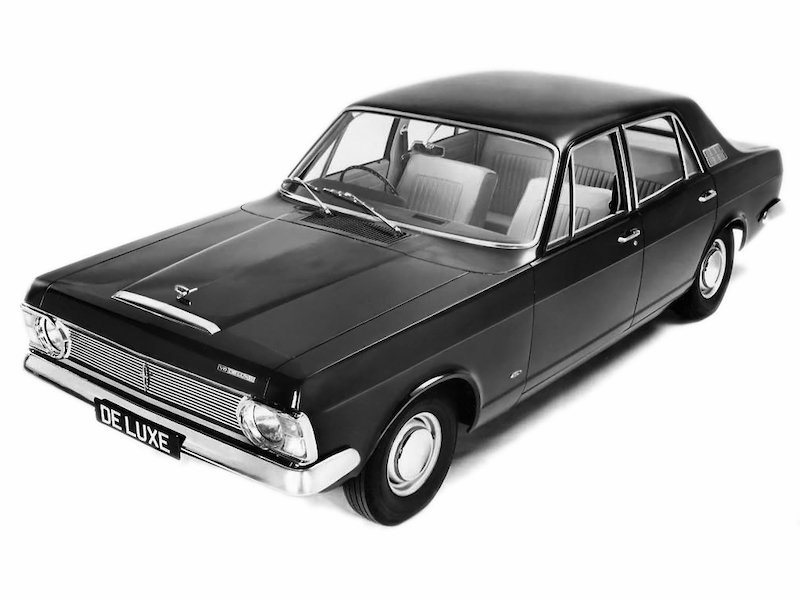 Or the comedy with the world’s most dilapidated 1969 Zephyr 6 De Luxe, even if Oz does refer to it as “a canny car”. The location work for Series One is an opportunity to marvel at typical German traffic in the early 1980s; Audi 80 B2, Opel Ascona B, VW Passat B1, Ford Taunus TC2, Peugeot 305 and Mercedes-Benz W115, to name but a few cars. All this plus Michael ‘Mr. Bronson’ Sheard as ‘Herr Grunwald’ and a lack of Jimmy Nail’s singing in the first season. 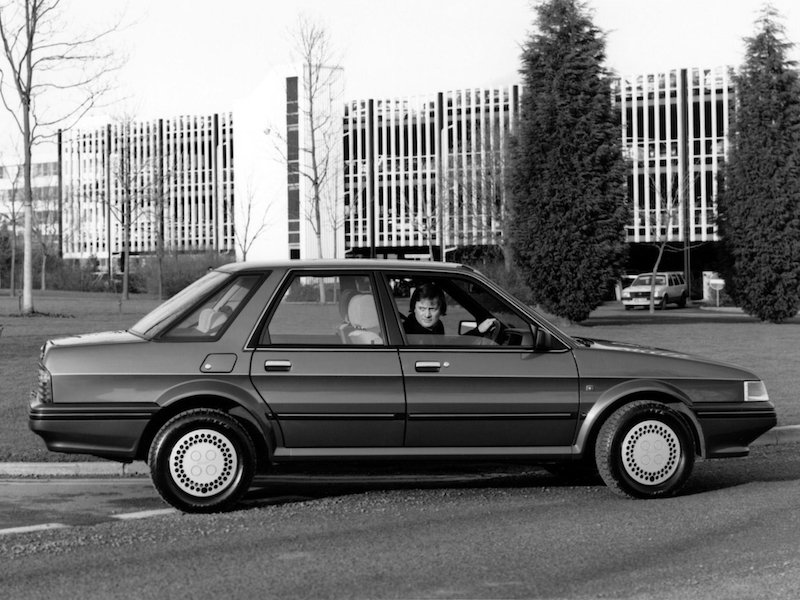 Two principal vehicles were a Norton Commando 850 and a 1965 BSA Lightning. The four-wheeled stars were a Montego 1.6 Mayfair, a Jaguar XJ6 Series III, a 1981 Renault 4 TL, and a very rare 1988 Nissan Bluebird ZX Turbo. If that were not enough, Boon also included a Rover 216 SE, a Renault 5 TL Series I and even a BMW Alpina B10. The show is worth viewing for the supporting vehicles, which range from a Bristol 411 and a Citroen BX Estate to a Peugeot 205 GTI and a police Vauxhall Senator B. 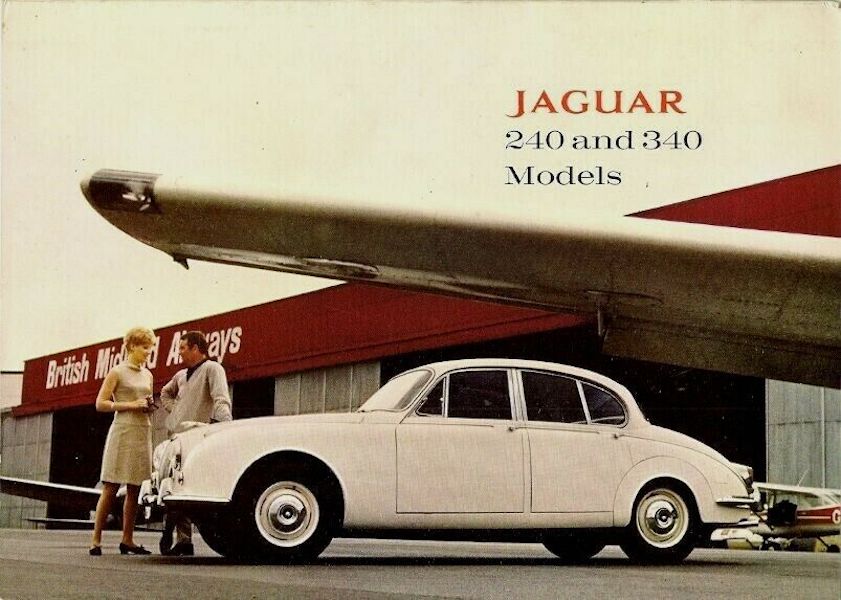 An ‘eighties sitcom that dates horrendously, but the lead car remains viewable; the 1968 ‘Jaguar 240’ owned by Joey Boswell. In fact, sharp-eyed viewers noted that in many of the scenes, it was a disguised Daimler V8 250. The second most prominent vehicle was Victor Boswell’s 1965 Volkswagen Beetle 1200, a reminder that 35 years ago, such cars were still regarded as cheap runabouts. Finally, the exteriors of Bread were filmed at Elswick Street in Liverpool, giving viewers the chance to marvel at the lost realm of Ford Escort Mk. IIs and Commer 2500 Vans. 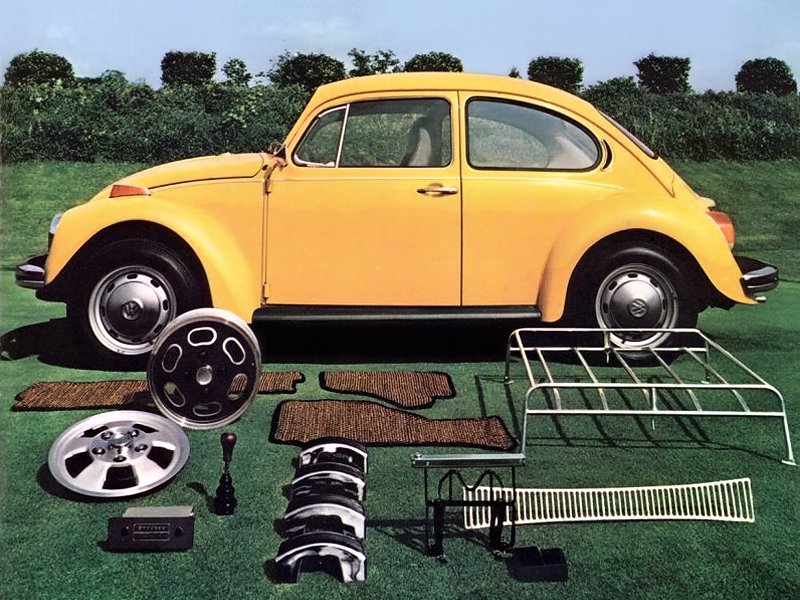 Sometimes, a sitcom lingers persistently in the memory – e.g. “what was that comedy series with a 1974 Beetle 1200 ‘Jeans’ and a young Simon Callow?”. The answer is Chance in a Million, with a supporting cast of typical mid-eighties automotive life. This is an outer London of Austin Metros, slightly down at heel Ford Cortina L Mk. IIIs, and Rover 2000 SD1s. N.B Volkswagen introduced the Jeans limited edition in 1973, and they were instantly recognisable via their ‘Tunis Gelb’ paint finish, black exterior fittings and ‘Blue Jeans’ cloth upholstery. 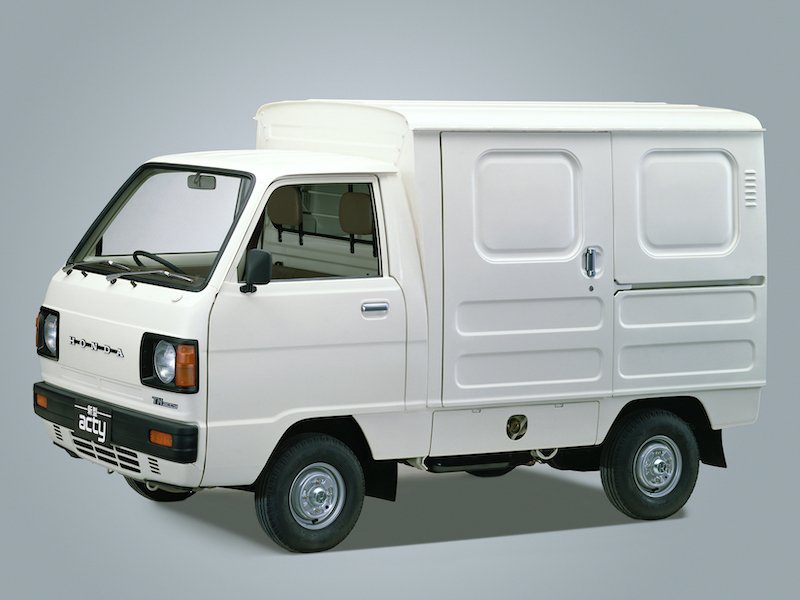 A comedy with almost too many sublime car-related moments to list. The first edition, Five Go Mad in Dorset, featured an Alvis TC 21-100 Drophead, a police Wolseley 6/90 and a Rover P4 75 ‘Cyclops’ – “Secret agents, blah, blah, blah”. Bad News (filmed before Spinal Tap) has a Ford Transit Mk. I tour bus and the VW Type 2 Camper in A Fistful of Traveller’s Cheques. Best of all, Mr. Jolly Lives Next Door starred Rik Mayall and Adrian Edmondson, a first-generation Honda Acty, a black Citroen DS23 (with a telegraph pole on the roof), and an unfortunate Trojan 200. Not to mention a somewhat traumatised Nicholas Parsons. 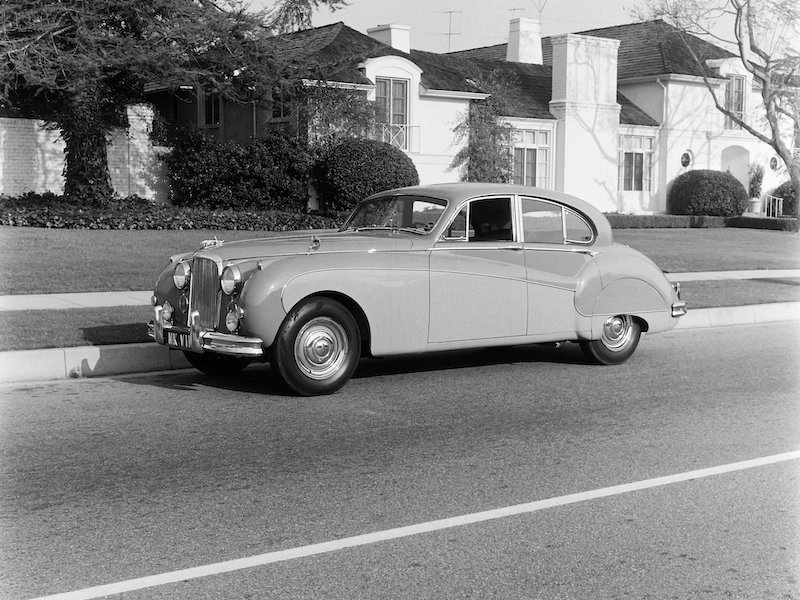 An unfairly neglected sitcom with a) a Bedford CF, b) a memorably catchy theme song from Joe Brown, and c) the great Roy Kinnear in the UK’s most down at heel Jaguar Mk. VIII. The last-mentioned is more than enough to make Cowboys worth the price of the DVD boxset. Best episode: C.L.O.D., with some excellent stunt work involving the Bedford and fleeting appearances from a Ford Corsair, a Renault 20 and a Series III ADO16. 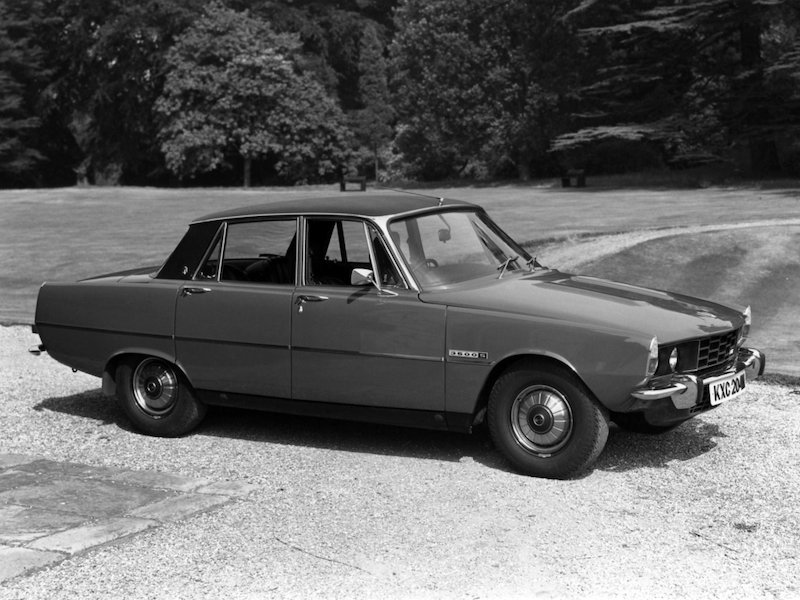 Sometimes, a car only appears in the opening credits to become instantly memorable. For example, the Rover P6s (the programme employed more than one) in The Gaffer was one of the most famous sitcom cars of the 1980s. And four decades ago, there really were factory bosses who resembled Bill Maynard and piloted an array of ten or even twenty-year-old rusting Triumphs 2000s, Ford Granadas, and Jaguar XJ6 Series Is and even Vauxhall Crestas PCs. Even if their owner did not have The Gaffer‘s approach to parking tickets: 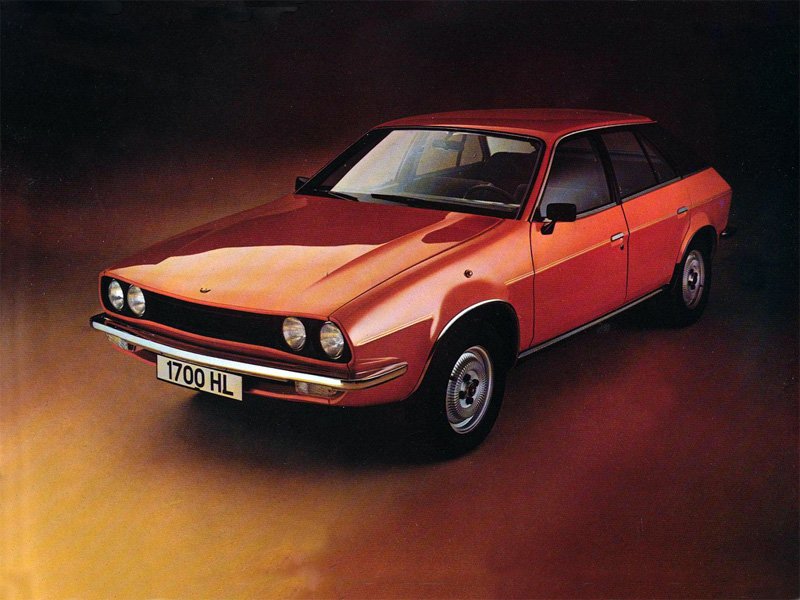 Yes, Terry and June really did last until as late as August of 1987. Several cars occupied the driveway of ’26 Elmtree Avenue’ throughout the nine series, from an Austin Ambassador to a Ford Sierra and a Granada Mk. II and Mk. III, although the model still associated with the series is the Leyland Princess. Terry Medford drove two; a Tara Green 1700 HL S2 and a Brooklands Green 2200 HL S1 modified to resemble a Series 2. The finest episode for car enthusiasts was 1983’s A Day in Boulogne, with extensive footage of French roads dominated by Citroen Visas, Renault 18 Breaks and various Deux Chevauxs. Plus, a Dover car park filled with Datsun Cherry 100As and Mini Clubman Estates. 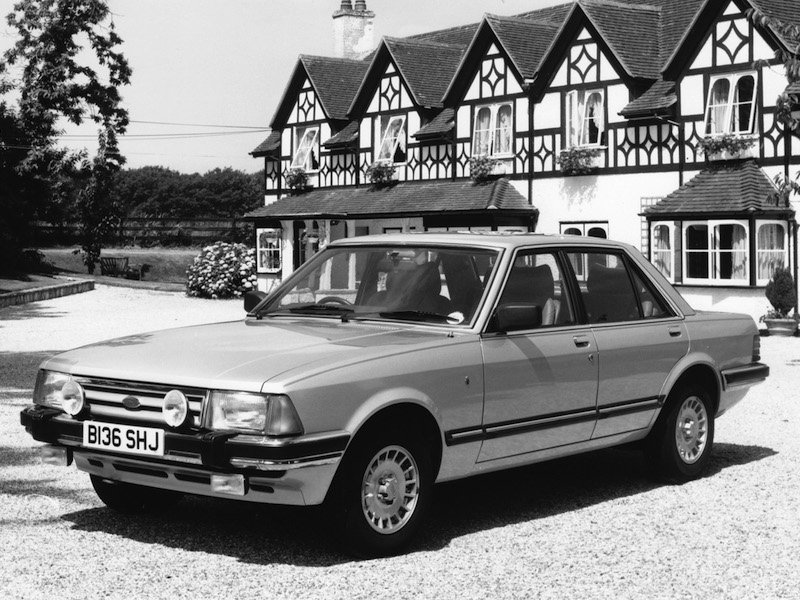 One of the genuinely great situation comedies and with quite a few motoring moments. Jim Hacker’s transport is a black Princess 1700HL S2, reflecting official practice at that time. In 1975 mid-ranking Cabinet ministers were chauffeured in a fleet of Wolseley’ Wedges’, and HM Government continued to use the ADO71 until 1982. The best Yes Minister stories for fans of classic vehicles are The Death List with its police Triumph 2500TC Mk. II and Party Games with Hacker’s Granada Ghia and – a familiar sight in almost any British ‘eighties sitcom – a Met. Rover 3500 SD1. 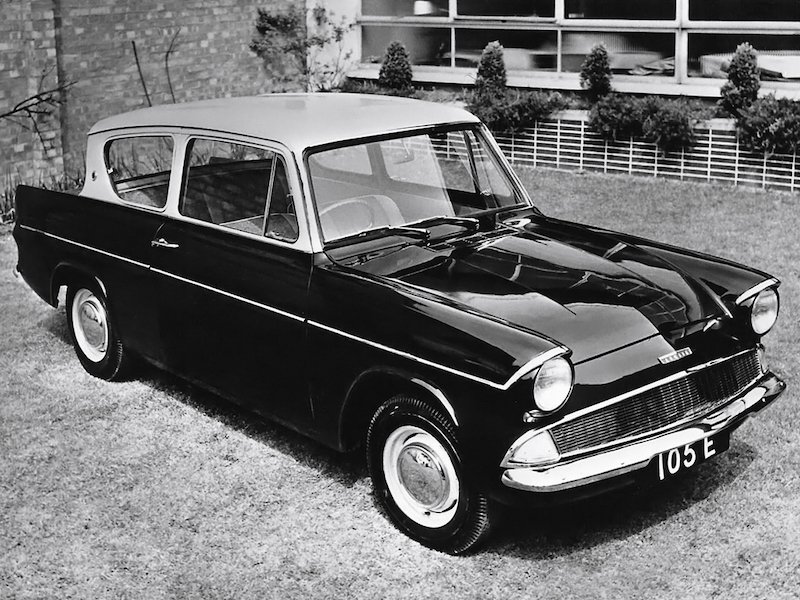 Can it really be 40 years ago when The Young Ones was first broadcast? The most famous vehicle over the two series was Vyvyan’s 1962 Ford Anglia De Luxe, customised with flame decals, special wheels and a cadaver’s leg on the bonnet. As the show progressed, its owner demonstrated that he was about as good a driver as he was an authentic punk rocker – i.e. not very:

Trivia notes; many street scenes were shot in Bristol, and the bus that crashed into Cliff Richard’s poster in the final episode is a 1963 AEC Routemaster:

Andrew Evanson, Senior Operations Manager for Lancaster Insurance, said: “Many of the 80’s comedies haven’t aged all that well, unlike some of the fabulous cars that are in them. The best thing about revisiting 70’s and 80’s TV is the sheer amount of great period cars to be seen. Even though most of those cars won’t have survived there will still be a few examples amongst collectors and enthusiasts. Having a ‘famous’ car can have an impact on it’s value so we would suggest exploring an agreed value policy so that the true value of the car would be realised should the worst happen.”