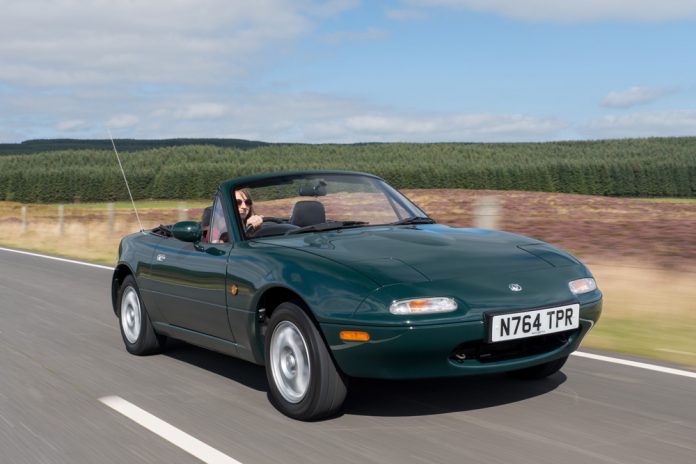 The idea for the Mazda MX-5 was first mooted as far back as 1979 but it took another five years for design work to begin. Five years after that the production model was launched at the Chicago Motor Show, and the MX-5 would go on to become the world’s best-selling two-seater sports car.

That first generation of the Mazda MX-5 was known as the ‘NA’ and featured a compact, lightweight body married to a revvy twin-cam engine, the 1.6-litre B6-ZE unit. Its 115bhp was delivered to the rear wheels via a terrifically slick five-speed gearbox and combined with double-wishbone suspension all-round the result was nothing short of brilliant. It delivered an unmatched sense of fun and agility that still impresses today. 1994 saw a 131bhp, 1.8-litre engine added to the range with power for the 1.6 dropping to a modest 88bhp, and there were also minor improvements to body rigidity and running gear. A wide range of special editions would be launched during production, and in 1998 this first MX-5 was replaced by the second-generation ‘NB’ model.

Plenty of examples ended up shabby and neglected, but with so many to choose from they are best avoided. As for the rest, that compact body does need checking for corrosion which can nibble away around the wheel-arches, scuttle, and front screen pillars. The most common rot-spot is at the rear of the sills as blocked hood drains allow the area to rust from the inside. It’s not a particularly difficult repair, especially for one of the numerous Mazda MX-5 specialists, but it’s worth checking that amateurs haven’t had a go with badly applied patches or, worse still, filler. Rust can also attack beneath, so have a good prod around the front chassis rails and sub-frame, along with the floor and jacking points. Faded paintwork and damage to the plastic nose cone are other potential issues. Lastly, there’s the matter of Japanese-market Eunos models. There’s certainly no reason to avoid them but it’s worth establishing what you’re looking at – JMZN in the chassis number indicates a UK Mazda MX-5, while NA means a Eunos import. The twin-cam engine is an absolute gem, and just simple maintenance will keep it healthy. Renewing the oil and filter every 6000 miles is best, and prevents any issues with the hydraulic tappets, and it’s important that the alloy cylinder head is protected by the correct concentration of anti-freeze. And check that the cam belt has been replaced every five years/60k miles, although at least there’s no risk of engine damage if it does break. Other issues are mostly minor, such as a leaking water pump and oil escaping from the front crank pulley seal, cam cover and cam sensor seal. While there really is little to fear under the bonnet if you fancy DIY maintenance, there are plenty of upgrades and mods available so check what’s been done. There’s not much to worry about with the transmission, either, a sticky feel to what should be a quick, accurate shift likely to be caused a split rubber boot beneath the mechanism that’s allowed lubricant to escape – it’s a cheap fix. Decent second-hand gearboxes can be sourced for £250-300, too. Listen out for a noisy differential, though, and bear in mind that imported cars might have a limited slip item which is pricier to replace.  Leaking clutch hydraulics are easy to sort, with a slave cylinder costing less than fifteen pounds. Eunos models were offered with an automatic gearbox which takes away some of the driving enjoyment, but it is reliable and it’s also possible to convert such cars to a manual ‘box. Apart checking for worn bushes and rot in wishbones and around suspension mounting points there’s not a great deal else to worry about. Some cars have been lowered which doesn’t always do the handling any favours, and with plenty of upgrade parts on offer it’s wise to ask about any work that’s been done. You can buy a fully adjustable set-up for around £500-600 but many owners prefer to stick with the delightful handling balance of the original arrangement. The latter can be undone by poor wheel alignment, though, so a full geometry adjustment can pay dividends. There are no real concerns with the steering, the only potential issue being leaks from the power-steering (vastly preferable to manual steering whatever some people will tell you), and it’s the same story for the brakes. They just need a check for wear, an ineffective handbrake and corroded calipers on little-used examples, and for ABS faults on later cars.

A cabin this small means less to check, and any scruffiness will soon be apparent. Threadbare seats and carpets and special edition models with worn leather trim are the obvious things to watch for, along with water leaks causing damage and mould. Replacement bits are cheap and plentiful, though. And remember to examine the hood and plastic rear window – original items and good-quality replacements should be double-skinned around the rear quarter area – as you’re looking at around £300 for a replacement. As for the electrics, it’s all simple enough with problems usually reserved for the electric windows and pop-up headlamps, and does the air-con in a Mazda Eunos still work? A more important point is checking whether the boot-mounted battery is of the correct gel type; budget around £100 for a replacement. When it comes to affordable fun, few cars can match the original iteration of the Mazda MX-5. Lauded when new for the delicious balance and adjustability of its handling, the same holds true today and when it comes to entertainment at sensible speeds there’s really nothing else quite like it. Add light weight to the mix along, with the rev-hungry antics of the twin-cam engine and one of the all-time great gearshifts, and you end up with a cracking sports car. And if you think this is rather too much praise for such an apparently simple device, well, just try one for yourself and you’ll discover it’s a revelation. And with plenty to choose from, you can ignore the abused restoration cases that lurk at the bargain end of the classifieds.

Want to buy the best British sports car never made in Britain? Then this is it! Mazda took what was the best of British two-seater sports cars like the Lotus Elan, MGB and Austin Healey and created something truly special with the MX-5. I love them so much I had 40 at one point and possibly the world’s largest collection. The brilliant thing about them is affordability – you can buy one at every price point, from a few hundred to a few grand. As ever I will say go for the best car you can afford, cheapest doesn’t mean best! Look carefully at the points made above and you should easily bag a decent car. Pack the sunglasses and an overnight bag, stick your partner in the passenger seat and enjoy the great outdoors.