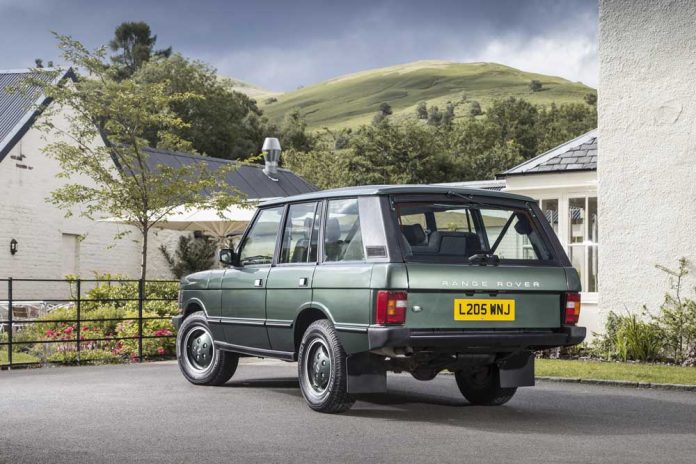 It might not have been the first luxury off-roader – the Jeep Wagoneer probably deserves that honour – but the Range Rover is surely the most famous. Celebrating its 50th birthday in 2020, it was designed by Charles Spencer King and provided a blend of peerless off-road ability with levels of comfort that would have been alien to Land Rover owners of the day.  The first models offered a somewhat Spartan cabin, one designed to be hosed down when it got mucky, but later iterations brought all manner of luxuries from opulent wood and leather trim to a raft of electrically-operated kit. Launched in two-door form only, the four-door model arrived in 1981. Under the bonnet was the Buick-derived 3.5-litre V8 with 135bhp, uprated in 1984 with Lucas fuel-injection that increased power to 155bhp. The petrol engine would grow to 3.9 and 4.2 litres, and from 1988 buyers could opt for a 2.4-litre VM diesel with smoother, more economical TDi units later on. Production ended in 1996 with the arrival of the second-generation Range Rover P38a. The most important check is for corrosion of the steel sections, so pay close attention to areas including the inner front wings, chassis and cross-members, bulkhead and floorpan.  Major restoration work will become very expensive, so check every inch before parting with any money. You’ll also want to examine the sills along with the mounting points between body and chassis. Up top, the aluminium panels aren’t entirely trouble-free as you’ll need to check for galvanic corrosion, and they are also susceptible to dents and damage. Big panel gaps are par for the course. You should also examine the bottom of the doors and the lower tailgate – the latter is a common rot-spot – and if the upper tailgate frame is corroded it can be replaced with an aluminium part; budget around £450 including the glass. Shabby, faded paintwork and evidence of bodged repairs also need watching for.

The V8 engine is by far the most popular power-plant, and aside from a hefty thirst for fuel it lasts well if properly maintained. Oil and filter changes every 3000 miles are advisable, and will prevent wear to the camshaft, followers and valve-gear, and sludging of the hydraulic tappets. Oil leaks are common, though, and watch for a smoking exhaust indicating an impending engine rebuild. A thorough check of the cooling system is wise, too, as overheating will do for the head gaskets and correct anti-levels are needed to prevent internal corrosion. Tired carburettors or dicky injection or ignition systems will lead to poor running, and if there’s an LPG conversion ensure the relevant certification is in order. The early diesel is sluggish, if fairly robust, but check for exhaust smoke and neglected maintenance. Later TDi oil-burners are the better bet. Transmission-wise, it’s a case of checking manuals for crunching synchromesh and an obstructive gearshift, and ensuring automatics aren’t suffering from jerky shifts. Expect oil leaks from gearboxes, differentials and transfer box and be sure to check that the four-wheel drive system operates as it should; repairs are costly. Strange clunks from beneath are likely to be caused by worn prop-shaft joints. A particularly wallowy ride will likely be down to tired springs and dampers, and you’re looking at around £150 per corner to replace both. The later air-suspension is a little more complex, and it’s worth getting a specialist check if you’ve any doubts; replacement parts aren’t prohibitively expensive, with air springs around £140 each and £200-250 for a compressor, but the cost of specialist diagnosis and labour can soon mount up. You’ll also want to check the numerous bushes for wear and perishing, especially those for the radius arms, rear trailing arms and anti-roll bars. Uprated polyurethane items are available. Look for corrosion around suspension mounting points, too, and for damage caused by clumsy off-roading. Fluid leaks from the power-steering hydraulics aren’t uncommon, while excessive play will need further investigation. Brakes are straightforward and just need checking for the usual wear and tear, although corrosion and subsequent seizure is always a risk on little-used examples. More costly will be problems with the ABS system that appeared from the early-1990s, so ensure the dashboard warning light illuminates and extinguishes as it should. Some parts are hard to source, and/or pricey.

The simplicity of the early interiors means damage will be easy to spot but bear in mind that some bits are getting scarce. If you prefer the wood and leather luxury of the later models then the condition will require proper scrutiny – the use of top-quality materials means a complete refurbishment can run into thousands. It’s also worth ensuring that water ingress from leaking sunroof drains or window seals hasn’t caused damage. A sagging headlining is a common problem, and fixing it is a pain. Later Rangies were also stuffed with kit, from the likes of cruise control and air-conditioning, to electric seats and it’s crucial that you press every button and switch. The cost of getting defunct items working again means they often get ignored by previous owners. Lastly, we’d advise a check of visible wiring looking for signs of bodged repairs or amateur modifications.

SUVs might be all the rage today, but the appeal of the original Range Rover remains undimmed. There’s something very special about the blend of imperious driving position and opulent cabin, plus it looks just as at home in a muddy field as it does outside the smartest establishments. And don’t forget that alongside the luxury credentials it’s still a supremely capable mud-plugger. All of that certainly explains why prices have been rising so steeply in recent years, and that in itself means caution is needed before taking the plunge. It’s still possible to find cheap examples in need of major restoration, and those have the potential to swallow plenty of cash. But be prepared to search for a good one and it will provide a feel-good factor that few other classics can match.

It’s easy to be seduced by the Range Rover as there so much to love, that lofty driving position, the go anywhere capability and of course timeless styling. Own one and it will reward you and you will find that you will start behaving differently! All of a sudden you will want some Hunters wellies, Barbour coat and a field you can drop the split tailgate just because you can. They are truly classless as well, from the Queen to a Plumber, all look good behind the wheel. Prices are steady so think further afield to find one, try Cyprus, Australia, or South Africa all RHD territories and good hunting grounds..