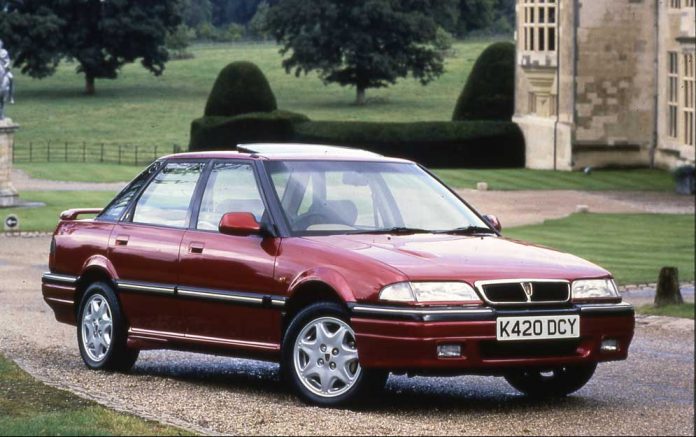 Thinking of buying a Rover 200/400 (R8)? This Buyers Guide will help you find the ideal example to suit your garage and your pocket.

Head back to 1989 and the new car market was a rather different place, buyers after a family motor facing a less baffling choice than is the case today. It’s no surprise that Ford and Vauxhall dominated the sale charts, but October that year saw Rover launch its new rival in the shape of the R8 generation 200/400.

Positioned as a slightly more upmarket alternative to an Astra or Escort, it was another collaboration with Honda (their model was the Concerto) and buyers could pick from hatchback or saloon (the 400) body styles. Power come from either Rover K-Series or Honda engines, followed by a diesel and Rover’s 2.0-litre T16 unit. And the range would also expand to include a number of variants, from a coupe and cabriolet to a neatly-styled Tourer estate. As with mainstream rivals there was a wide selection of trim levels, and if buyers fancied something a little hotter there was always the GTi or Turbo. Whilst production of the hatchback and saloon models had ended in 1995, sales of the coupe, cabriolet and Tourer would continue for another few years. Despite showing impressive levels of corrosion-resistance when new, time and neglect will have taken their toll. That means proper scrutiny of the bodywork is required, and rot will crop up in all the usual areas such as the wheel-arches, door bottoms, sill seams and wing edges. It’s also advisable to have a good look around the front and rear screen seals, along with the edges of the sunroof aperture. It would also be sensible to ensure that the foot-wells and cabin/boot floors haven’t succumbed to rust, especially if there’s any sign that water’s been getting in. Otherwise, it’ll be a case of checking for the usual signs of abuse that result in damage to bumpers, panels and paintwork. Also, make sure that a cabriolet’s hood and frame are undamaged and watch for damaged and leaking roof-panel seals on the coupe.  Overall, historically low values mean that major restoration won’t make financial sense, although enthusiastic owner’s clubs are a great source of parts and advice.

The R8 range can essentially be divided by those with Rover engines and those powered by Honda, and the former’s K-Series units gained something of a poor reputation. In reality, conscientious maintenance with regular oil and filter changes and a fresh cam belt at 60,000 miles should mean years of reliable service. Head gasket failure is the commonest concern, so watch for overheating, or signs that oil and coolant are mixing; if it does need replacing then uprated multi-layer steel gaskets are inexpensive. The Rover units are also prone to oil leaks, and check for a corroded radiator and coolant pipes. As for the Honda engines, they are broadly reliable so check for neglected servicing and for any ignition system woes – some components for latter can be hard to source. Diesel engines could be suffering from a smoky exhaust while the powerful turbocharged units require extra care; be wary of one that appears to be burning oil. A variety of gearboxes were employed depending on engine, and all will need checking for the usual signs of wear and tear such as whining bearings and failing synchromesh. The four-speed automatic should change gear smoothly so any thumps or delays during shifts will need further investigation. The suspension was a thoroughly conventional arrangement and should prove trouble-free unless neglected. It’s wise to inspect the mountings points for any signs of corrosion, though, as major repairs will get costly unless you’re handy with a welder. Otherwise, just spend time looking for any obvious leaks from the dampers and for bushes that are past their best. Anti-roll bar bushes and drop links are common wear points, as are rear radius arm bearings, but clunks and rattles on the road test should reveal any problems in these areas. Parts availability is good, though, and there’s also scope for upgrades such as polyurethane bushes. As for the brakes, it’s just the usual wear and tear although cars with ABS need further checks as some components are hard to source. A failing pump or fluid leaks are the likely extent of any power-assisted steering problems. Incidentally, you’ll find the steering heavy and unwieldy in unassisted form and it rather spoils the car’s decent agility, so make sure you’d be happy with that before buying. Good quality materials and a smattering of wood on the dashboard and door trims certainly provided the R8 with a classier ambience compared to most rivals, and it still appeals today.  Naturally, years of use and abuse can leave things looking tatty so cast a critical eye over the upholstery and woodwork and look for cracks and damage to plastic mouldings. Paying for the services of a professional trimmer is unlikely to make sense, so it’s best to avoid a really decrepit interior. In any case, there’s a reasonable supply of second-hand parts should replacements be needed. In terms of the electrics, it’s essentially a case of ensuring it all works with particular attention paid to the likes of central locking, electric windows and sunroof and immobiliser systems. There’s nothing especially complex about the electrical system but chasing niggling faults gets frustrating. Apart from the properly rapid turbocharged models driving one of these Rovers isn’t going to be a pulse-quickening affair, but that’s rather to miss the point. Instead, they provide a comfortable, refined and interesting alternative to period rivals and combined with remarkably affordable prices they make for a sound choice. And the fact that you can choose from a wide range of body styles just adds to the attraction. The coupe is a genuinely good-looking modern classic with a firm following amongst enthusiasts, while the added practicality of the smart Tourer variant makes it well worth considering. But whichever one you fancy, just remember the low values before taking on a major project. That said, all models are good to drive, and when you factor in the excellent club support it adds up to a very tempting ownership proposition.

BMW bought Rover for a reason and the front wheel drive technology of the Rover was it, so take their word for it, they are good handling cars! K series issues aside, you can buy a 200/400 for the price of a decent meal to a few grand today and most if not all would have had the engine issues sorted by now. Whenever I go to car meets, its always a joy to see a small select band of Viking badge lovers standing with pride next to their 200/400 they truly are a modern classic. An easy way to get into classic car ownership and once in.. your always be a Rover driver.