Changing customer habits has led to a greater focus on SUVs. 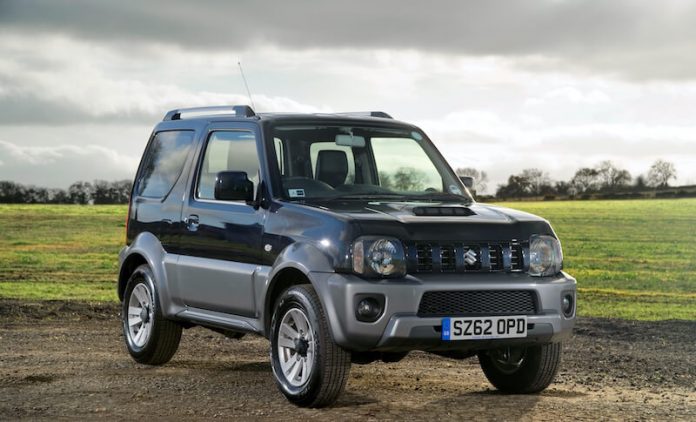 Reliable and fun, a used Suzuki Jimny is cheap to run and solid as a rock. If you’re looking to buy one here’s what you need to know.

The recent Suzuki Jimny hit something of a snag in 2020, tough EU emissions rules forcing the company into announcing that sales that year would be strictly limited, before saying that it would return only as a light commercial variant with no rear seats. But you can still get your hands on this rugged 4×4 by choosing its predecessor, a model that was on sale for a full twenty years. Launched in 1998 as a replacement for the SJ, it aimed to bring a bit more comfort and civility (relatively speaking) without losing any of the brilliant off-road ability. 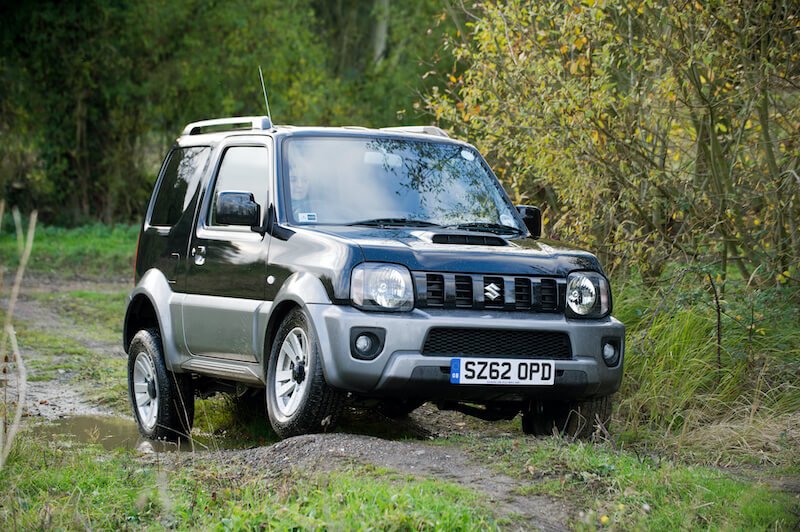 Buying a Suzuki Jimny couldn’t have been simpler as it was offered in just 3-door estate or soft-top body styles, the latter disappearing in 2005. Up until then it would have been JLX trim or nothing, but a refresh in 2005 updated the interior and brought the likes of alloy wheels, electric windows, central locking and driver and passenger air bags as standard. It cost just £10,000 in manual form.

The JLX+ of 2006 meant minor trim and colour changes and a further update in 2009 introduced the plusher SZ4 model that added part-leather seat trim, with air-conditioning added in 2013 when a cheaper SZ3 model was also offered. The last major change was for the 2015 model year when the SZ4 gained an improved choice of trim and colours, and additional kit such as tyre pressure monitoring and electronic stability control.

The ‘Adventure’ special edition of 2016 featured a unique two-tone paint scheme and satellite navigation, although just 200 were made. That simplicity certainly makes buying today one much easier, so just concentrate on getting the best you can afford, bearing in mind that the later, better equipped models will certainly be nicer to live with. 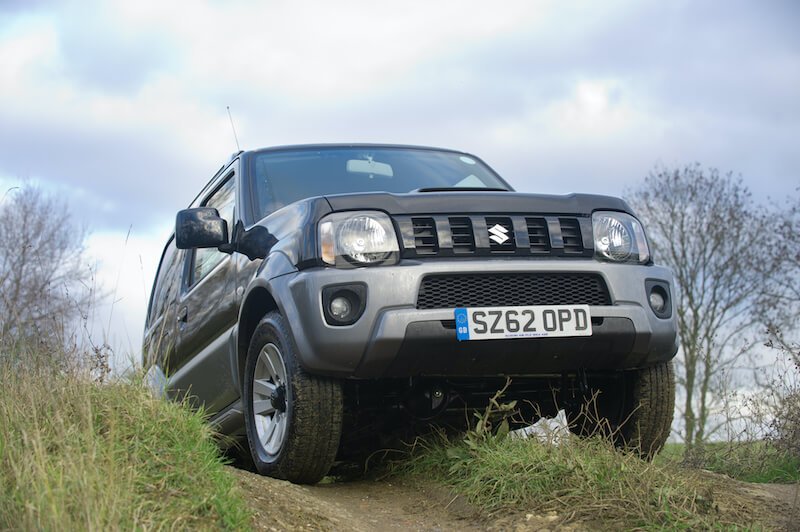 We’re used to car makers offering a sometimes baffling choice of engines, but that’s certainly not the case here. In fact, the Jimny was powered only by a 1.3-litre, four-cylinder unit that in original form managed a modest 79bhp. Managing around 80mph with 0-60mph taking a lengthy 17 seconds, it claimed combined economy of around 36mpg.

In 2005, that engine was swapped for a Euro IV-compliant version with 84bhp, which slightly improved performance and efficiency. The key difference is the earlier version used a cam belt which needs changing at 80,000 miles, while the later unit swapped to a timing chain – changing the engine oil and filter every 6000 miles will keep things healthy. Both engines are simple and easy to work on if you fancy DIY maintenance, and are capable of high mileages as long as they’ve not suffered from abuse and neglect. We’d also advise checking for oil leaks, excessive exhaust smoke and signs of head gasket failure, and make sure that the cooling system is healthy. Failed sensors can lead to poor running, so watch for any warning lights.  Transmission-wise, there was a choice of 5-speed manual or 4-speed automatic units and both need a check for oil leaks. Whining or crunching from a manual is a bad sign, although second-hand replacements can be found for a few hundred pounds, and make sure that an automatic isn’t noticeably jerky in operation.

Also, it’s wise to check differentials for escaping lubricant; changing their oil at 9000 miles is a sensible move. As for the four-wheel drive system, there was a high/low range transfer box and freewheeling front hubs and it’s basically a case of ensuring it engages properly and works with no nasty noises. The vacuum-operated front hubs can play up but it’s possible to convert them to manual selection. Lastly, 2005 saw Suzuki fit its ‘Drive Select’ system where the lever for selecting four-wheel drive was replaced with a push-button arrangement. 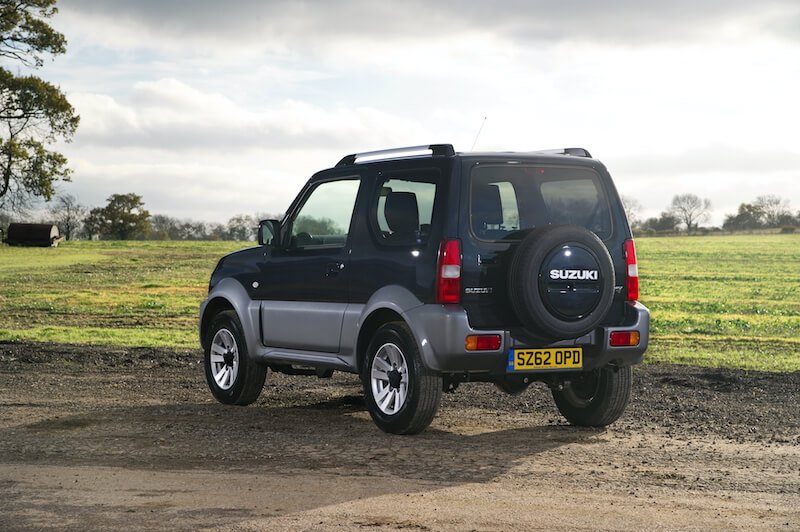 Things were just as simple here, the Jimny’s braking system comprising discs at the front and drums at the rear with ABS added from 2005. Wear and tear aside, there’s little to worry about and it’s cheap and easy to overhaul. The coil-sprung suspension was similarly straightforward, with likely problems being worn dampers, perished bushes or corrosion around mounting points.

Check for any signs of off-road damage, though, and whether a previous owner has indulged in modifications. It’s not a problem as long as the work has been done properly but a focus on improving capability off road may have comprised the already marginal refinement on it.

A further issue regards the steering which can suffer from an annoying wobble at 45-50mph – causes can vary, from wheels and tyres, to suspension, steering components, or CV joints and finding a cure isn’t always straightforward. Be sure to check for this on the test drive. And with recalls related to steering, suspension, brakes and stability system ensure they’ve been attended to.

Finally, it’s wise to give the underside a thorough inspection for corrosion and evidence of off-road battering, and check the panels for rust bubbles and general damage. Age and hard use may have taken their toll, so haggle accordingly if tidying or repairs are going to be needed. 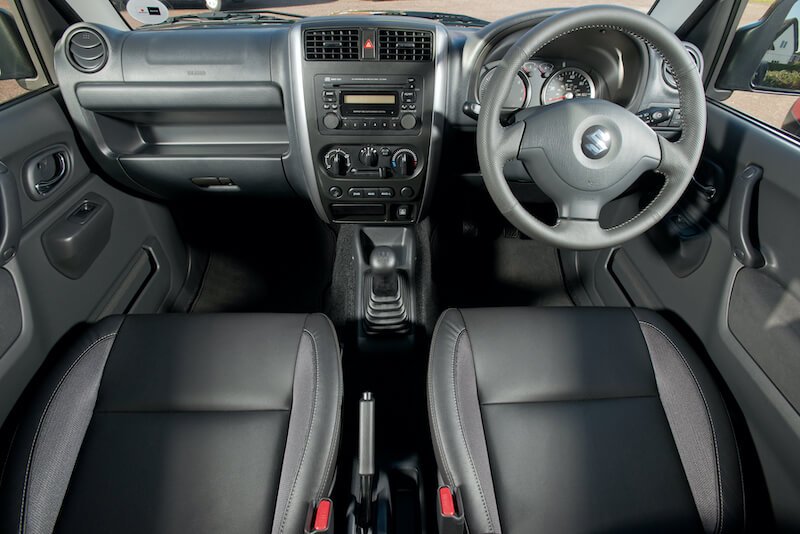 Suzuki opted for a no-nonsense approach when it came to the cabin, which means it’s pretty basic by modern standards. Later examples are better equipped, and while you wouldn’t call any Jimny luxurious it at least feels fairly robust. The only thing to do is check it for damage – examine leather seat trim for splits and tears – and ensure it all works as it should. They can suffer from the odd electrical gremlin, so watch for electric windows and central locking that have gone on the blink, but it shouldn’t prove too costly to sort any issues.

Given the compact exterior, it can feel a bit cramped inside and there’s just 324 litres of cargo space, so you might want to check it’ll suit your needs. And with on-road refinement something of a weak point, long journeys might prove more of a trial than you’d bargained for, too. 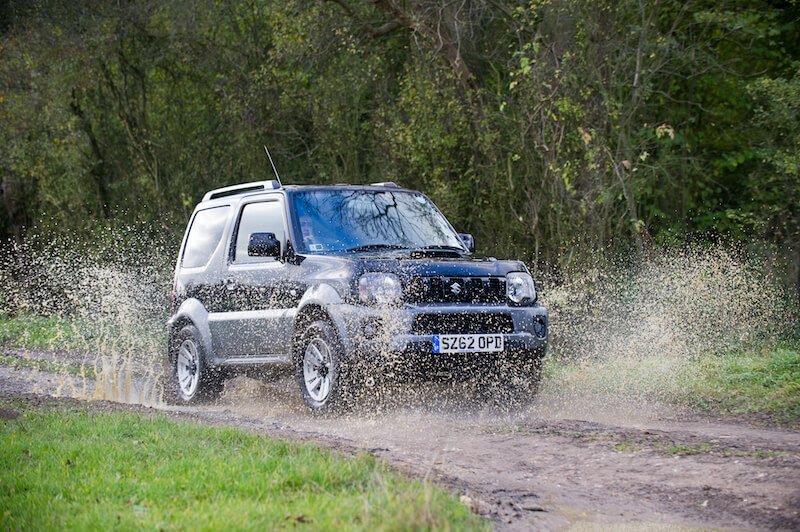 If what you’re after is a fun and affordable mud-plugger then the Jimny’s charm may prove hard to resist. It’s far more capable in the rough stuff than you’d think, and while its manners on the Tarmac are rather less civilised whether that matters is down to personal choice (it’s probably best to try one before you commit).

It’s certainly fine if you’re not planning on long motorway slogs, though, and combined with decent overall reliability the ability it offers when you go off road may be all the convincing you need. And with winter on its way this dinky 4×4 could just be the ideal purchase.