Buckle up for these cinematic road trips. 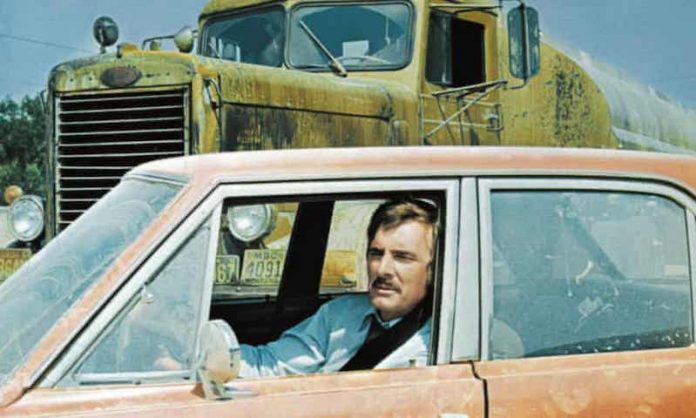 The great American road movie is one where the main character or characters embark on a long journey and learn something of themselves in the process, often while snappily dressed and at the wheel of a desirable car. Here’s our friends at Lancaster Insurance’s Best of US Road Trip movies.

We have restricted our list to post 1970 US road movies which rules out Easy Rider – it was released in 1969 and is largely concerned with two-wheel machinery. As for Non-US titles, such as the Mini driving across New Zealand in Goodbye Pork Pie, they will be the subject of another ‘Top Ten’. But for now – remember: “You can never go fast enough.” 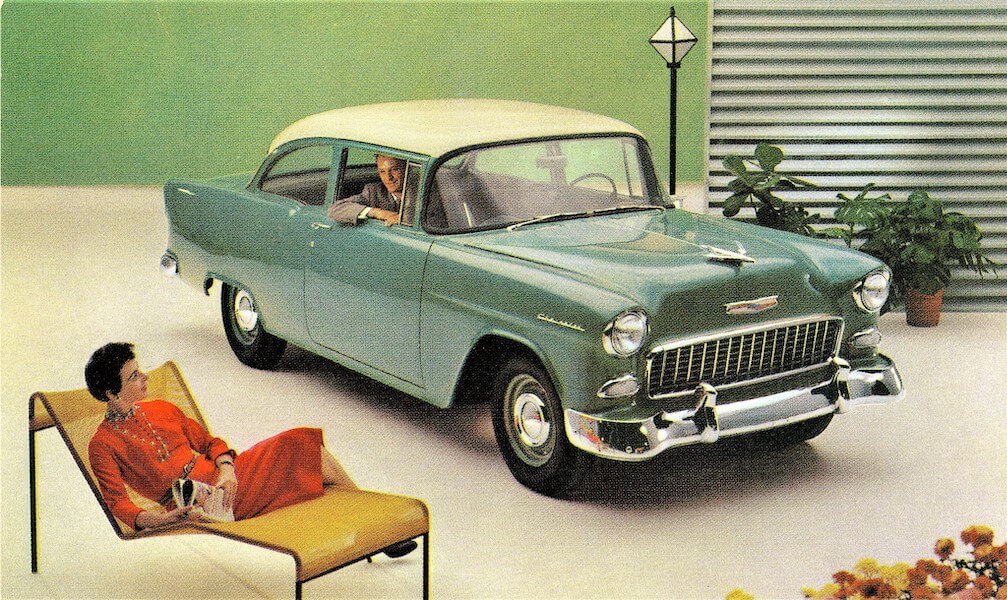 According to the director Monte Hellman one of the three 1955 Chevrolets in Two-Lane Blacktop “was an authentic race car and was too loud inside to record dialogue. The second had a smaller engine in it and was quieter. The last one was a stunt car, so it had a rollbar and equipment for the stunt shots”. Two subsequently appeared in American Graffiti while the film used a pair of Orbit Orange 1970 Pontiac GTO 455s; they feature the ‘Judge’ specification stripes and a spoiler.

Hellman recalled, “We kept them after filming, and I actually drove one for about three months. I think I had more tickets in that three-month period than I did in my whole life outside of that time”. 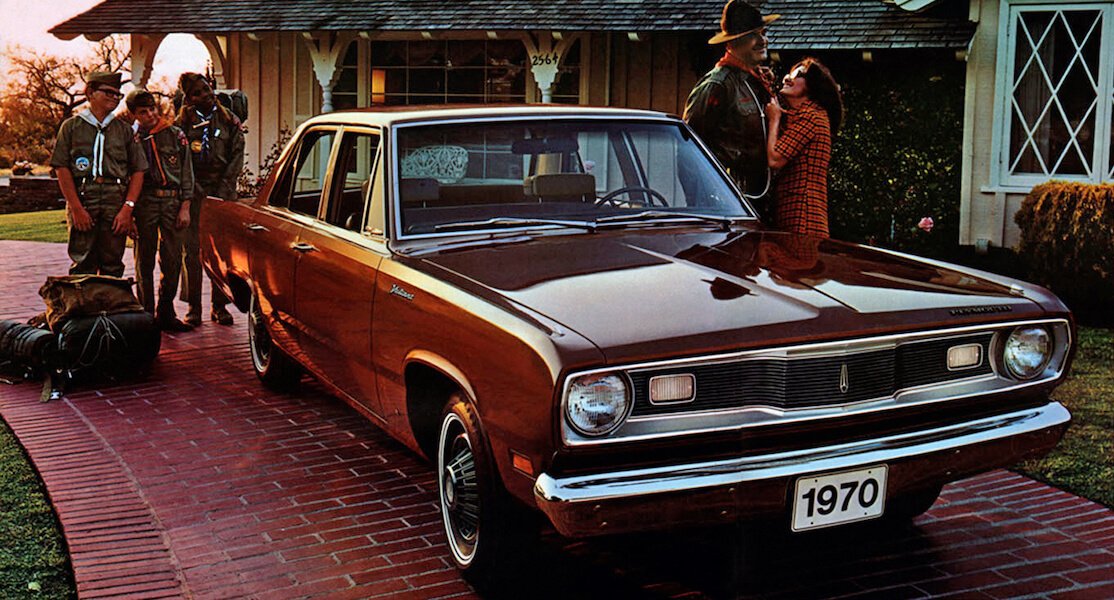 The budget was 750,000 dollars, the location shooting schedule was only 14 days, and the director was a 24-year-old named Steven Spielberg. The lead actor Dennis Weaver often  took the wheel of the Plymouth Valiant (which varies from a 1970 V8 to a 1971 225 cubic inch ‘Slant Six’), driving for over 2,000 miles, with stuntman Dale Van Sickel taking over for the more demanding scenes.

As for the villain, Duel’s art director held a casting session and chose an ex-Union Oil 1955 Peterbilt 281 “Needlenose” as it fulfilled Spielberg’s brief of a “‘Murder Inc’ on wheels”. The crew would consistently apply fresh coats of oil and dirt, and decorate the grille with dead grasshoppers to make the truck appear even more menacing. 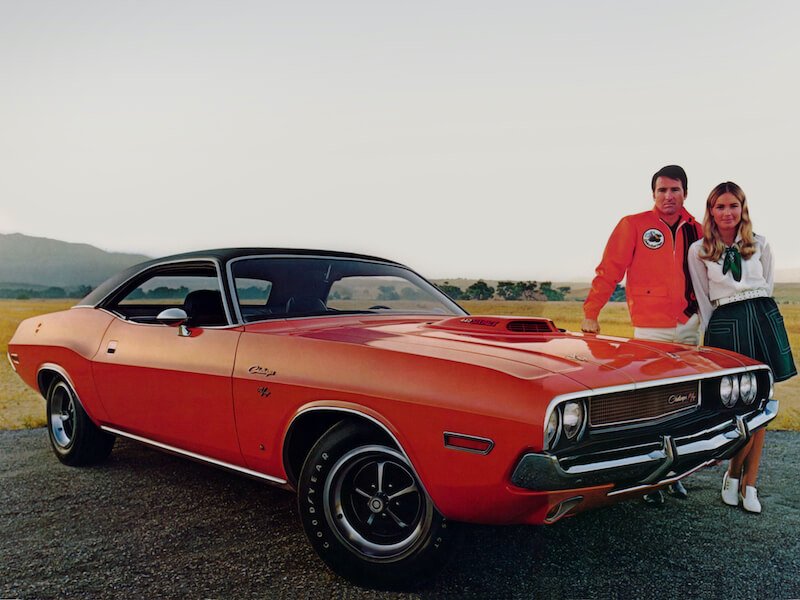 Money was a significant factor in Vanishing Point using Challengers – at that time, Chrysler would rent cars to film studios for a mere dollar per day. A total of five R/T specification Dodges were used, four with manual transmission and the 440ci unit and a fifth with the 383ci plant and automatic gears. The director favoured the Alpine White paint finish as it contrasted with the desert background.

Stunt work was the province of the great Carey Loftin, while the lead actor Barry Newman thought “it was almost as if there was too much power for the body. You’d put it in first, and it would almost rear back!”.

N.B. Challenger fans will be relieved to know that the scene with the bulldozer used the shell of a 1967 Chevrolet Camaro packed with explosives.

Smokey and The Bandit 1977 – Pontiac Firebird Trans Am 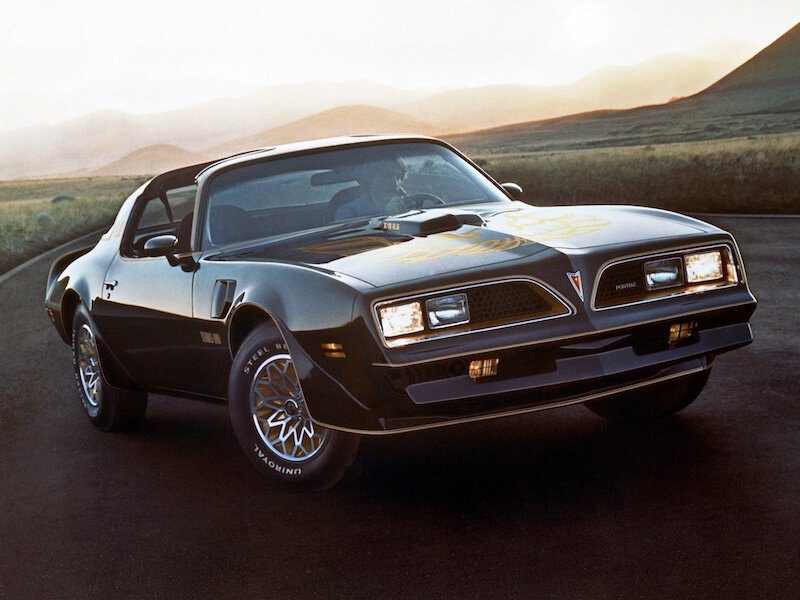 The director Hal Needham persuaded General Motors to provide the film with the Trans Am, plus a pair of Le Man sedans as police vehicles. As the 1977 models had not debuted when Smokey entered production, the cars needed to be disguised, so the Bandit drives 1976 models with 455ci engines and clip-on dummy fronts. The three on-screen Tran Ams met their demise during the shooting, but a fourth ‘Publicity Vehicle’ survived. Needham himself took the wheel for the Mulberry Bridge jump with the famous stunt woman Lada St. Edmund doubling for Sally Field.

N.B. The overdubbed engine note is from the Two-Lane Blacktop Chevrolet! 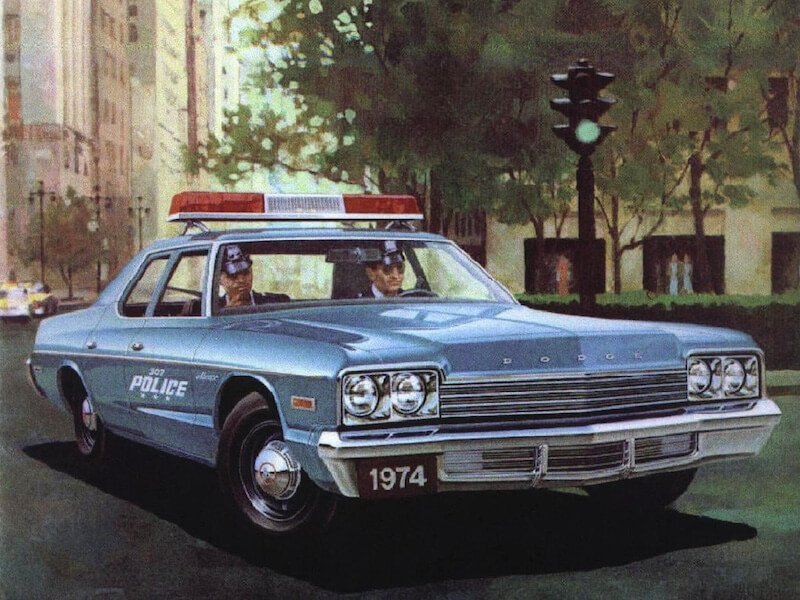 For starters, this is the film that used 60 Illinois State Police cars, 42 Chicago PD cars and 40 stunt drivers. The production bought some five dozen ex patrol vehicles at $400 each, while Jake and Elwood use 13 Bluesmobiles – aka a 1974 Monaco. The Chicago Street scenes were shot on Saturday and Sunday mornings; the director John Landis later reflected at one point he had some 34 vehicles travelling at 110mph through the city.

Dan Aykroyd, a keen devotee of fine cars, chose the marque and model of Bluesmobile largely because “At that time the hottest police car in America was the Dodge Monaco with the 440-cubic-inch-engine” 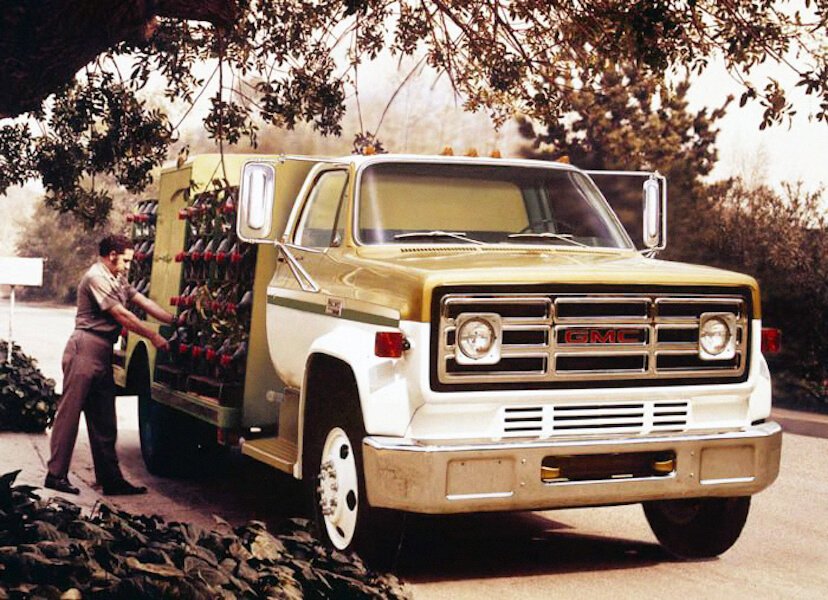 How could any film with an Edsel Ranger, a Lincoln Continental Town Coupe, and a 1949 Mercury two-door station wagon be almost forgotten today? In addition, the sight of a GMC C6500 jumping over the wreckage of a bridge is not just a great screen moment; it also seriously injured the stunt driver Dean Jeffries. “I ended up breaking my back when I landed, and I couldn’t move my legs to stop the truck — I was going over 100 mph. So, I just reached up with my arm and pushed my leg onto the brake and skidded to a stop”. Fortunately, he recovered. 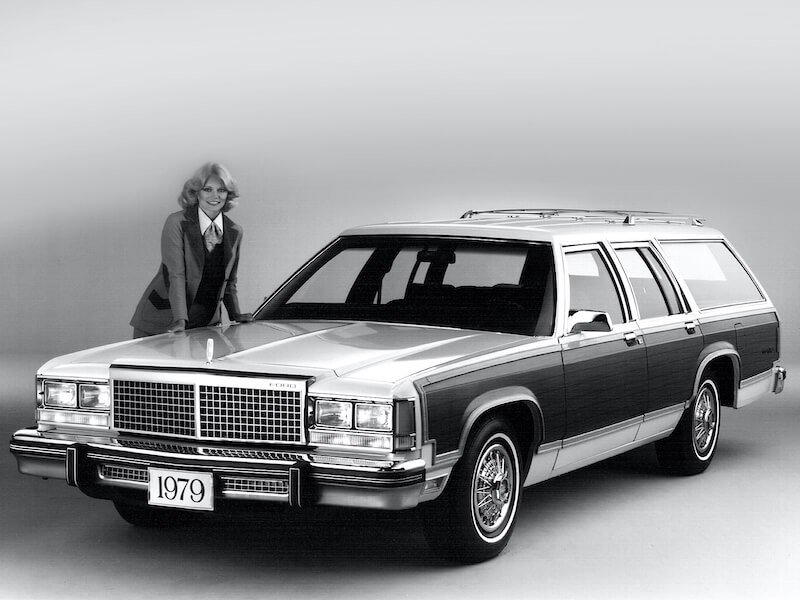 “This is not the car I ordered. I distinctly ordered the Antarctic Blue Super Sports Wagon with the C.B. and optional rally fun pack”.

But what could be better suited to the Griswolds’ holiday than a Metallic Pea ‘Wagon Queen Family Truckster’? For the film, Warner Brothers treated a 1979 LTD Country Squire station wagon to eight headlamps, fake timber panels, and an airbag fashioned from a bin liner. The aim was to create a car that was naff, suburban and generally as visually unappealing as possible. Vacation used five Wagon Queens, and to quote Ed the Car Salesman – “You think you hate it now, wait ’til you drive it!”

“Funny as that may seem with all this mess, the radio is the only thing that’s really working good. And it’s clear as a bell—don’t ask me how.”

Del Griffith, played by a never-better John Candy, is nearly always optimistic, even after wrecking a 1986 Le Baron. Its screen modifications included the steering wheel and taillights from a Dodge 600 plus the boot from the older K-car convertible and a non-standard luggage rack.

N.B. As no firm wished to be depicted as utterly inept in a major feature, the production needed to hire 250 cars for the ‘Marathon Rental’ scene. 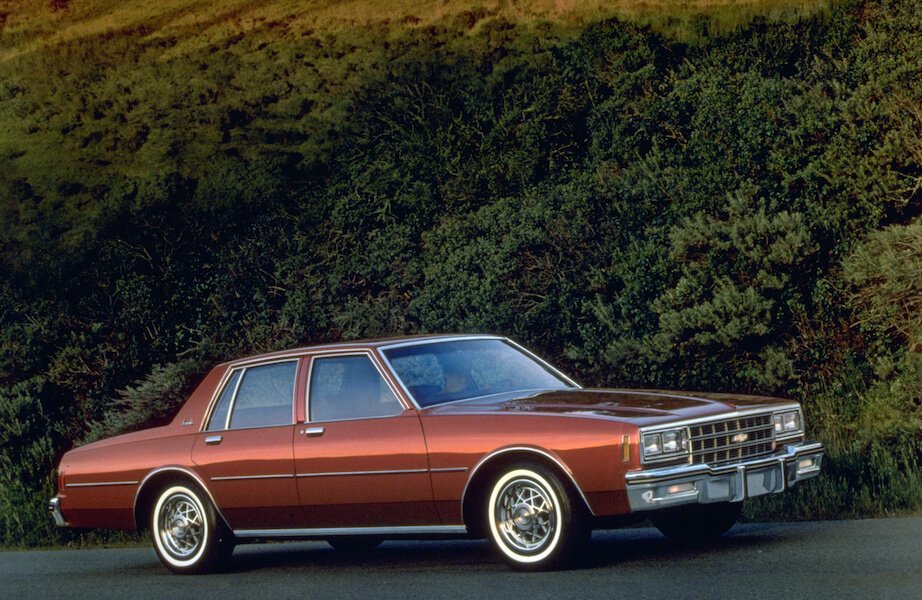 Not only one of the finest hours of Robert De Niro and Charles Grodin but a chance to see any number of uber-1980s Detroit cars, from a Mercury Grand Marquis Colony Park and the Impala to a Dodge Diplomat, a Chrysler New Yorker and a very elegant Lincoln Town Car.

This scene, with “You two are the dumbest bounty hunters I have ever seen! You couldn’t even deliver a bottle of milk!!” encapsulates the film’s appeal, although anyone with a taste for classic American machinery might like to look away now.

The production used five stock-specification T-Birds: the ‘hero car’ for the exterior shots, a camera car, two stunt vehicles, and a backup. The famous ending took place in Dead Horse Point State Park; the final scene to be shot and employed just two takes and three Fords. The crew removed as much weight as possible and arranged a series of cables and ramps to allow Thelma and Louise to ‘fly’ off the precipice. Unfortunately, the first car plummeted, but they succeeded on a second attempt; Car number three remained on terra firma.

N.B. In the penultimate scene, with the T-Bird darting under the railway bridge, that really is Geena Davis in the passenger seat.

Andrew Evanson, Senior Operations Manager for Lancaster Insurance, said: “We all love a classic road trip! The Lancaster team usually embark on several of them every year in a variety of classic vehicles. These are all fantastic films but there are two that stand out for me. Smokey and the Bandit and The Blues Brothers would feature high in my top 10 favourite films list with the Trans-Am being one of my favourite all time movie cars. I’d dearly love one and would certainly cherish it much better than Burt Reynolds did!”