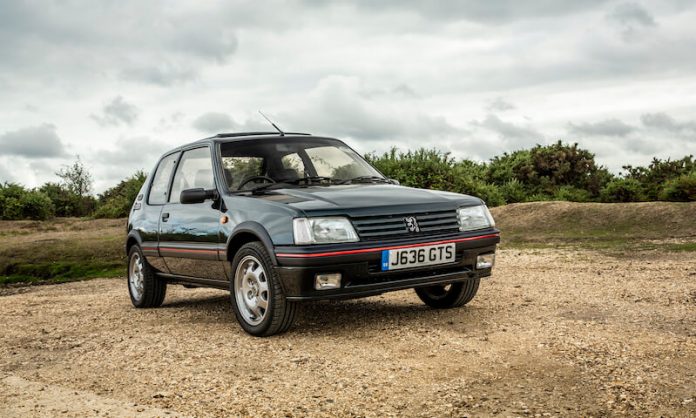 A legend amongst hot hatchbacks, it’s no wonder the Peugeot 205 GTI has topped so many of those ‘best ever’ polls.

The Gerard Welter-penned styling still looks fresh almost forty years after the hugely entertaining Peugeot 205 GTI made its debut, those first models powered by a 1.6-litre engine developing 105bhp. That doesn’t sound much but remember that it had to propel little more than 850kg. The result was punchy performance allied to terrifically agile handling, and for those after more straight-line pace the 1.9-litre model from 1986 would have fitted the bill very nicely. 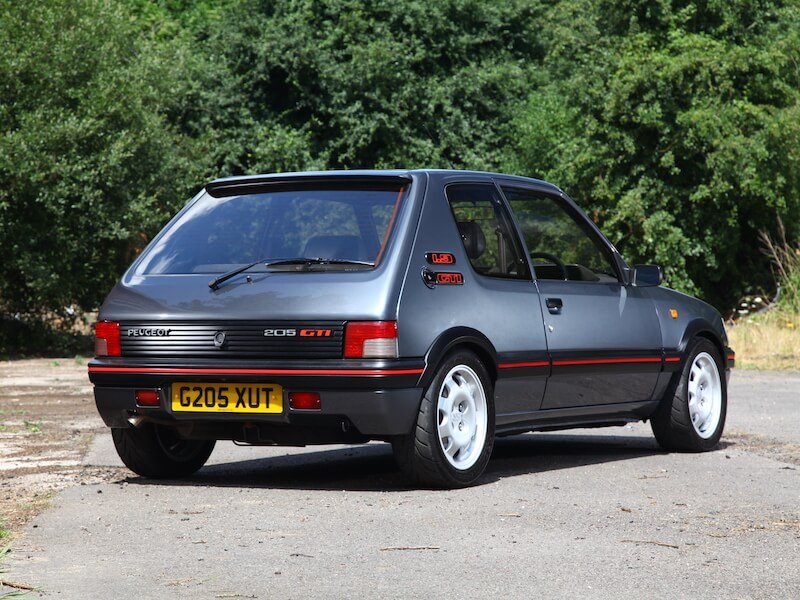 With power boosted to 130bhp it could sprint from 0-62mph in just 7.8 seconds.  The 1.6 gained an extra 10bhp at the same time, while buyers could also opt for a convertible in the form of the 205 CTI. 1990 saw the introduction of the Phase 2 models with tweaks to exterior styling and additional options such as ABS, and two years later production of the 1.6 ended. Fitting a catalytic convertor to the 1.9 engine reduced power to 122bhp but allowed it to soldier on until 1994 when this GTI’s time was finally up.

So what should you be looking out for if you’re thinking of buying a Peugeot 205 GTI? We’ve got your (hatch)back and have compiled a guide:

Lift-off oversteer meant drivers with more confidence than skill often came a cropper, so it’s crucial to establish whether there’s a history of accident damage. Mis-matched paint and wonky panel alignment are obvious giveaways, and it’s wise to look for ripples in the front chassis legs, inner wings and boot floor.

If all that checks out then a search for corrosion is next, focusing on areas such as the rear quarter panels, front and rear screen surrounds and the bulkhead. Rot in the doors and sills, and bubbling from behind plastic body trim needs watching for, too. And it’s wise to examine the floor panels and the area around the fuel tank, the latter being labour-intensive to rectify. Paintwork quality could be hit-and-miss, so don’t be surprised to find evidence of previous re-spraying – it’s not a problem unless hiding something more sinister – and look for faded and damaged trim and bumpers. 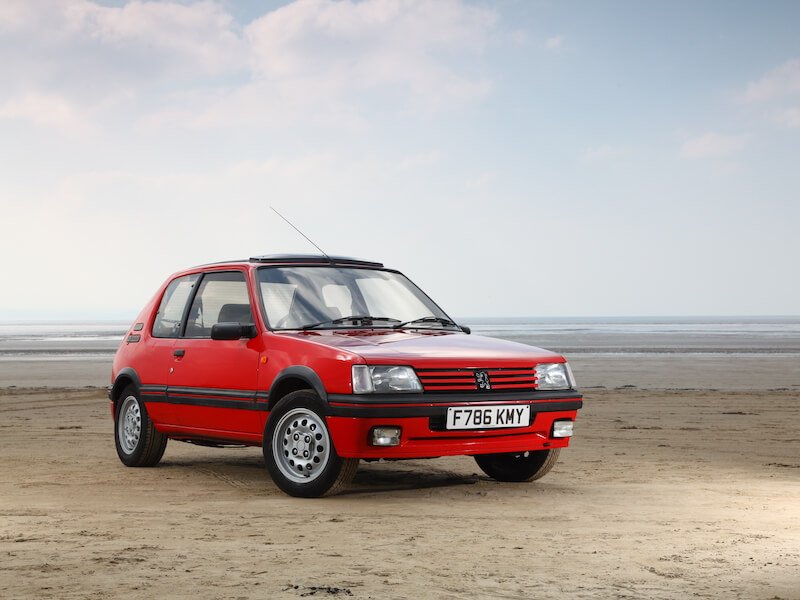 Thrashed and neglected engines were once the biggest risk, but rising values means there’s a much better chance a potential purchase has been cared for. One thing worth checking is that the cam belt and water pump has been changed every four years, and watch for exhaust smoke caused by perished valve stem oil seals. The exhaust manifold can crack, too. Head gasket failure can rear its head, as can oil leaks, and correct coolant strength is vital to protect the internals of the aluminium engines.

A lumpy idle and general rough running is often caused by failure of the air-flow meter – budget around £100 for a replacement item. And should a comprehensive engine re-build be needed then you’re looking at £2000-3000.

Lastly, some owners swapped engines for more powerful units or indulged in aftermarket tuning so make sure you’re happy with any work that’s been done. The main transmission concerns are synchromesh wear and a baggy gear shift, although an inexpensive refurbishment of the linkages might cure the latter. Watch for clutch wear and stiff operation, though, as replacing the cable is a fiddly job. 1.6 models can also suffer from worn outer driveshaft joints, and lowering the suspension can make the problem worse.

Assuming there’s no sign of corrosion around the suspension mounting points and front strut turrets then turn your attention to the rear axle. Excessive camber on the rear wheels or uneven tyre wear can indicate failure of the radius arm bearings, something that can ultimately lead to axle damage; if it’s already been fixed, so much the better, but a complete repair is around £700.

Front wishbone bushes, top strut mounts and anti-roll bar drop links are other common wear points, and it’s worth checking whether a previous owner has gone down the upgrade route – it can spoil the handling unless done properly, and it won’t appeal to those that value originality.

Later models with power-assisted steering can suffer from hydraulic fluid leaks, and check the brakes for wear (1.9s got discs all round) and signs of corroded brake pipes. Phase 2 models got the option of a Bendix ABS system so be sure to check that it operates correctly. Corroded or kerbed alloy wheels can be revived for around £70 per corner. 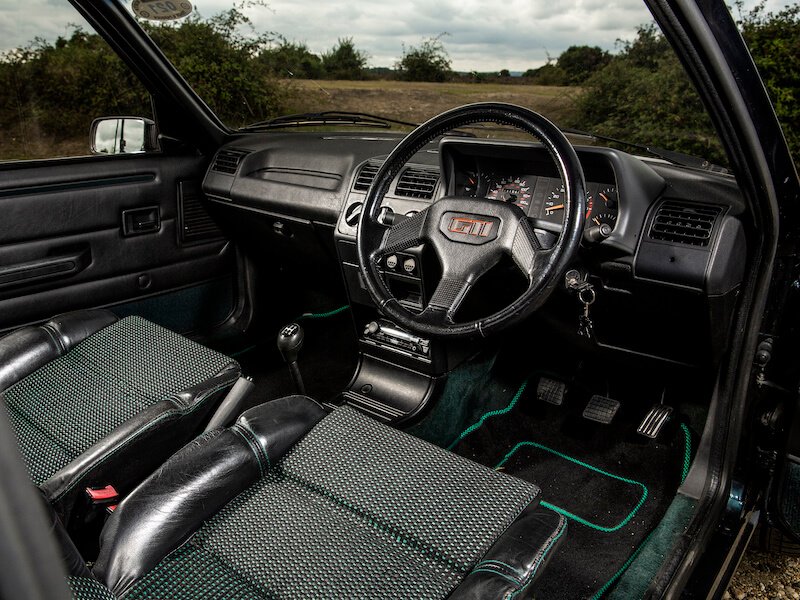 Cabin plastics were somewhat flimsy so check carefully for cracks in the dashboard and other mouldings. Replacement bits can be tricky to source, but it is now possible to find original cloth seat trim – that’s just as well as worn bolsters are common. Budget accordingly if leather trim is in need of specialist refurbishment and ensure the seats themselves haven’t worked loose.

Like other 205’s the GTI can suffer from electric niggles, so check that dials and switchgear functions correctly and pay special attention to items like electric windows and central locking.

It’s also worth mentioning the sunroof that proved a popular option, and which used a vacuum system to provide an effective seal – it’s generally reliable and specialists can sort any problems, but look for evidence of water leaks and corrosion around the opening. And if you’re tempted by the Convertible don’t forget to check both the condition of the hood and its operation (it was electric from 1990).

Spend just a few minutes on a twisty B-road and the way the Peugeot 205 GTI responds is little short of breath-taking, the combination of razor-sharp throttle response and equally sharp handling making rivals feel dull and flat-footed. No wonder the car was so revered when new, and it impresses just as much a few decades on.

Okay, so build quality was nothing special and plenty have led hard lives, so it pays to be picky and consult a club or specialist if you’ve any doubts about condition or provenance. But find a good example and you’ll revel in the sort of thrilling driving experience that few other cars can match. Perhaps the fact that the late, great Sir Stirling Moss owned one tells you all you need to know about how good they are… 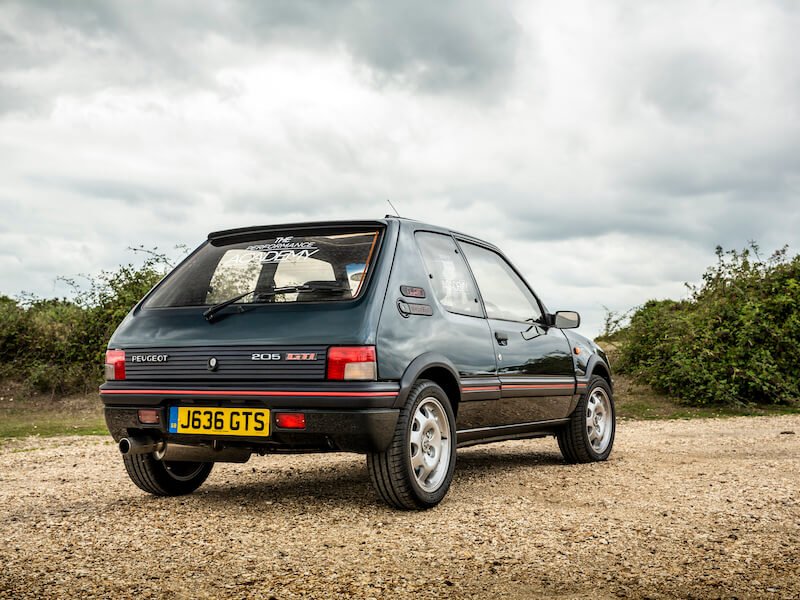 I cut my teeth on the Peugeot 205 GTI, I had a site that specialised in them and bought and sold thousands.

Good ones these days are demanding strong money, I’ve seen one advertised at 40 Grand! But you don’t need to spend that to get a decent car. Most these days that are on the market have already been restored or at least all problems would have been sorted.

Think before you buy though as these cars demand a garage, leaving them outside is not a great idea it’s better to have them tucked up dry and safe. Once driven you will never look back and you’ll be scratching your head thinking why don’t newer cars drive like this? It’s a mystery it really is!