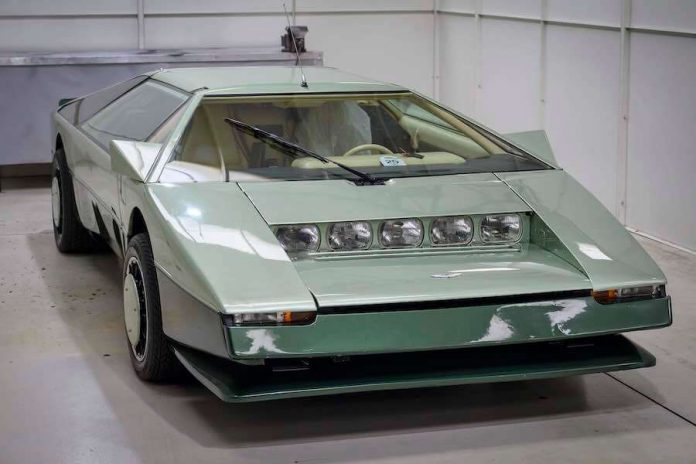 We all have a car that resonates with us and for motoring TV presenter and journalist Alex Riley, it was the Aston Martin Bulldog.

The Aston Martin Bulldog is the car that filled The Car Years’ host Alex Riley with excitement and anticipation. Alex explains why this car is still close to his heart…

As a child in 1980, I can still remember the mind-boggling excitement I felt when the 200mph Aston Martin Bulldog supercar was revealed to a stunned World. Out of nowhere, here was the fastest and most advanced supercar ever made, and it was British. That mattered.

We didn’t make big-hitting mid-engined supercars, and the Aston Martin Vantage had to keep the British end up in group tests against the Ferrari 512BB and Lamborghini Countach S. Suddenly, we’d leap-frogged everyone and made the greatest supercar in the World.  But then, after a few magazine stories and TV appearances, Bulldog disappeared, and was never heard of again. Not until the Jaguar XJ220 came along could Britain again claim to build the World’s fastest car.

But now, at last, Bulldog is back and thanks to a just completed 18month, 6,000 hour restoration by CMC in Bridgnorth, it’s as good as new.  But that’s not all, next year Aston Martin test driver Darren Turner will take it to the VW Test Track in Germany to find out, once and for all, if it really could do 200mph.  I’d like to think Ferrari and Lamborghini are just a little bit scared. 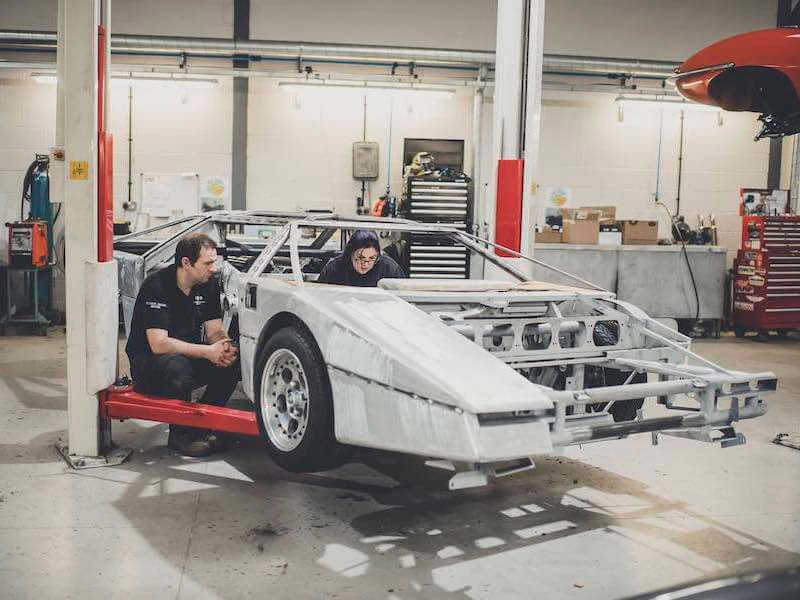 Two hundred miles an hour, in 1980?  Well, the Bulldog’s twin-turbocharged V8 produced at least 650bhp, when a Lamborghini Countach made do with ‘just’ 370.  And the extreme-wedge bodywork’s small frontal area and claimed drag coefficient of around 0.35, gave it a theoretical top speed of….237mph.  It did hit 191mph on the oval at MIRA, but a planned max-speed run in Germany was abandoned when Aston ran out of money, and the Bulldog disappeared, leaving a tantalising question mark over its true maximum.  Had things been different, Bulldog might’ve hit the magic 200mph mark seven years before the Ferrari F40.

But as Nigel Woodward of CMC explains, restoring a car that never made production is quite a challenge: “we had no drawings and most of the photographs were so grainy they were pretty useless too.  We’ve had to make prototype parts to replace prototype parts!  But having the input of original development engineers Steve Hallam and Dave Morgan has been invaluable”

The Bulldog was to be a technological testbed, and a showcase for Aston’s engineering talents.  Chief engineer Mike Loasby designed a chassis and suspension, and William Towns, designer of the Lagonda, came up with the stunning wedge bodywork.  But when Loasby left Aston, the project stalled until1979 when a young team headed by 29 year old Keith Martin was given just a year to finish it.

When it broke cover in 1980, it made its Italian rivals seem a decade out of date.  As well as its mind-boggling power output, and outrageous looks, the straight low waistline and almost flat glass meant visibility through the front and sides was amazing for a supercar.  And to avoid the drag of pop-up headlights, a panel below the windscreen popped down to reveal a row of five separate lights.  The brakes were from a Can-Am racing car. 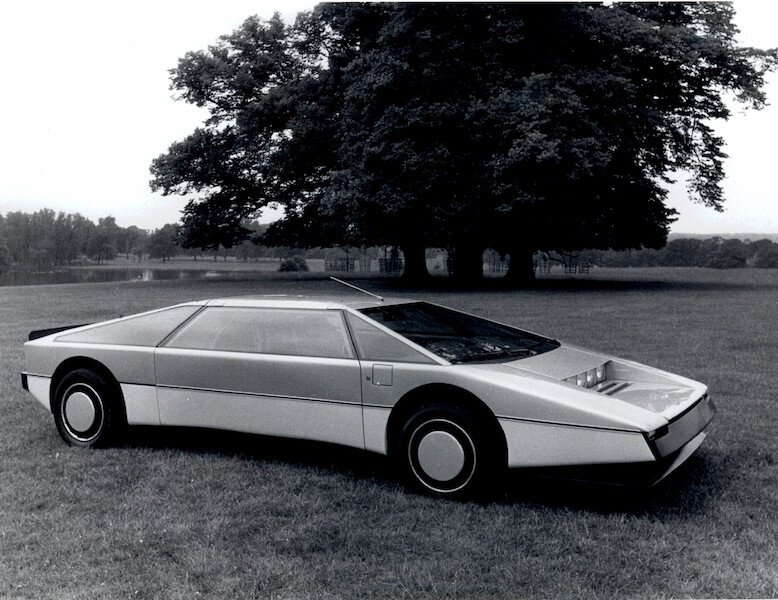 But this was still an Aston, so the interior featured acres of gorgeous reddish-brown leather with an array of high-tech LCD instruments.  And the fully stressed roof and twin A-pillars meant the sills could be cut away, making getting in and out far more civilised than in a Countach or Ferrari Boxer.  And the pièce de résistance?  Hydraulically operated gullwing doors.

But in 1980 Aston were in trouble again.  Victor Gauntlett rode to the rescue, but saving the business meant shelving the Bulldog project and the single prototype was hastily finished and sold off to the Middle East.  Victor’s son Richard Gauntlett is managing the project on behalf of the new owner, Philip Sarofim.

When the car arrived at CMC it had changed somewhat in the intervening 40years. The interior was now cream, and various interior parts gold-plated.  A roof console was fitted, and a rear-facing camera was wired up to a tv screen let into the dash.  It had sprouted angular door mirrors and the original wheel covers, designed to suck cooling air through the brakes, had been messed about with.  And it was green.

“There was also quite a bit of damage to the chassis, and the De-Dion suspension tube had been chopped about so we had to make a new one.  Connolly managed to find the original leather sample so we’ve re-trimmed it in the correct hide and the dash was mostly intact underneath, so we could compare it to photographs and restore it to the original layout.  And we found two bits of the original paint, so we’ve been able to perfectly match the shade”.

As well as establishing Bulldog’s top speed, the new American owner intends to use the car in the city, so reliability and driveability have been key.  “[original engineer] Dave Morgan said immediately we’d need modern fuel injection.  At some point the Bosch mechanical system had been removed and the chassis cut and welded to make room for Webers.  We repaired the chassis and fitted modern injection with a fully mappable engine management system. We’ve also significantly strengthened the original block, and there’s a new steel crank and lightened internals.  All in the name of durability.” 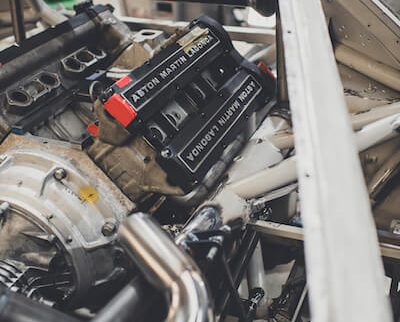 Modern technology has enabled CMC to bring Bulldog closer to its original design.  “It was designed with turbos under the cylinder heads, for better response, but they couldn’t keep them cool so moved them up and back behind the engine, where the spare should have been.  The new turbos are water-cooled, so we’ve put them back where they were designed to go and reinstated the spare wheel.”

And another modification will help the car achieve its potential. Even at the launch, Aston admitted that the front was too low for road use.  Plans for an active front spoiler that deployed above 40mph were abandoned due to time and cost.  So the engineers had to raise the ride height, affecting the aerodynamics and handling.  CMC has now fitted a hydraulic nose lift to clear obstacles which means Bulldog can, at last, run at its design height.

To see if it all works, testing will begin in late October, building up speed slowly before a date with destiny at the track where Bugattis are tested.  To ensure the safety of driver Darren Turner a very strong roll cage has been hidden in the cabin and a fire suppression system will be fitted.  And Pirelli has been very helpful producing ‘Y’-rated P7’s with the correct 1980 tread-pattern. 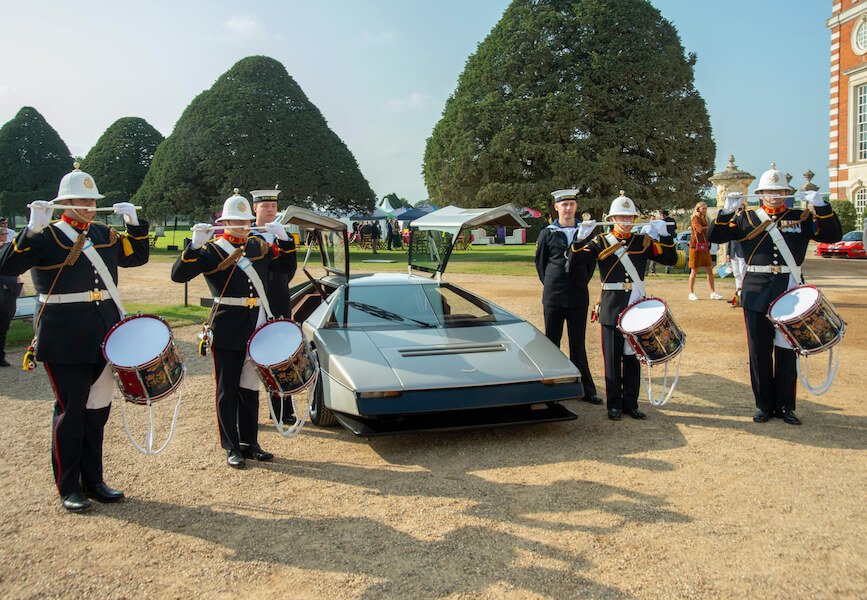 Nigel Woodward reflects on the project so far: ‘As an ex Aston man, It’s been a fantastic honour to be entrusted with this mythical beast, and tremendously interesting.  And I’m just as excited about the next phase of the project.’  You and me both, Nigel.

Alex Riley is a TV presenter and passionate car enthusiast.  He’s well known for injecting humour and intelligence into a huge range of topics on The One Show (BBC1), and for his highly entertaining documentary series’ ‘Britain’s Really Disgusting Foods’ and ‘Secrets of the Superbrands’ (BBC3).  He is also a winner of Celebrity Mastermind (BBC).

Alex drives a Triumph TR7 and is hugely knowledgeable about cars – beginning his TV career researching and presenting on Top Gear (BBC). He presented The Classic Car Show to much acclaim and hosts the popular ITV4 show, The Car Years.