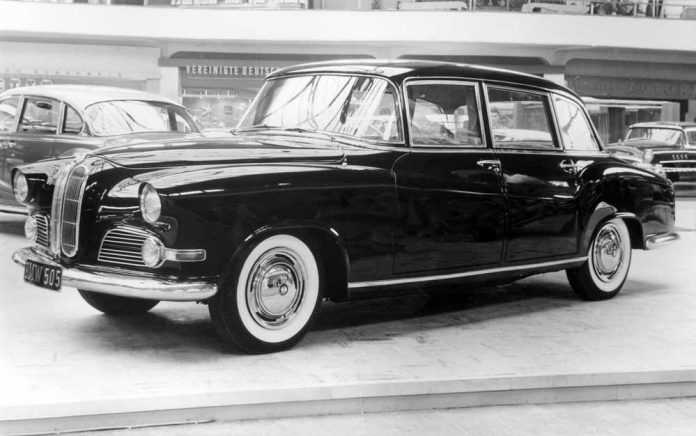 More than sixty years have passed since BMW attempted its own take on the luxury limousine, but it was a project destined to end prematurely.

Take a look at the modern BMW range and, SUVs aside, you’ll find all manner of saloons, coupes and cabriolets.

Things weren’t so different back in the 1950s and at the beginning of the decade the company launched a new four-door saloon – the 501. It would come to be known as Der Barockengel – the Baroque Angel – and featured a mix of pre- and post-war styling, a steel ladder-frame chassis, and a somewhat underpowered 2.0-litre straight-six engine.

Recognising the lack of performance, BMW improved matters by slotting in their new light alloy V8, that model becoming the 502.

And the saloon would be joined by coupe and cabriolet variants, those models built by coachbuilding specialist, Baur, who had also constructed the first couple of thousand 501 saloon bodies before production switched to Munich.

It was a sound enough range, but in an echo of today’s rivalry between BMW and Mercedes when it comes to attracting important and wealthy buyers the firm from Munich decided that what they really needed was a limousine.

Reputedly the project was initiated because the German Chancellor, Konrad Adenauer, was looking to replace his Mercedes and the chance to provide his transport of choice was too good an opportunity to ignore.

Essentially a stretched, more opulent version of the 501/502 saloon the job of designing the new model – the BMW 505 – was handed to Giovanni Michelotti at Ghia-Aigle. Unfortunately, it seems just one prototype was built (some sources say there were two) and the car never went into series production. We’ll come to why a little later, but first it’s worth recalling what could have been a significant model for BMW in the battle for luxury car supremacy.

Featuring steel bodywork with the bonnet and boot lid fashioned from aluminium and with what BMW referred to as a panoramic windscreen, the car that BMW described as a ‘Pullman Limousine’ when it was displayed at the 1955 Frankfurt International Motor Show sat on a reinforced steel chassis borrowed from the saloons. The extra space was created by extending the rear of the chassis by 200mm while beneath the alloy bonnet sat an over-square, pushrod 3.2-litre V8 that was fed by a twin-choke carburettor for a modest 118bhp.

It drove through an all-synchromesh four-speed manual gearbox with the choice of two different rear axle ratios (a 3.42:1 axle was optional for more relaxed cruising) and while no performance figures were quoted the additional heft would likely have made for stately progress that was arrested by drum brakes all round.

Suspension was by an independent arrangement at the front with adjustable torsion bars at the back, with telescopic dampers all round.

Stately rather describes the dimensions of the 505: for comparison, the length and wheelbase were just an inch or two shorter than a current BMW 7 Series, but the new limousine was not only a notable thirteen inches narrower but sat six inches taller than today’s model. It certainly would have made a statement, an impression reinforced once a prospective owner had taken a peek inside. Richly trimmed with mohair upholstery, suede carpets and plenty of top-quality wood, the rear seats were ‘designed like a club chair and equipped with adjustable head rests’ according to BMW. And the luxury didn’t end there, with electro-hydraulic operation of the windows and central partition, separate heating and ventilation, and additional radio speakers for those important people ensconced in the rear who communicated with the driver via an electrical intercom system.

No doubt they would also have appreciated the finely-crafted drinks cabinet incorporated into the central divider between front and rear, a unit that also featured storage shelves to each side along with writing tables and reading lamps. An electric clock, flower vase, and cigar box and ashtray also seem to have featured on the spec sheet; surely just the sort of items that any self-respecting captain of industry or Head of State would have demanded.

Which brings us back to why the 505 never made it past the prototype stage. So the story goes, Konrad Adenauer knocked his top hat off when exiting the car – either on the Frankfurt show stand or after a test drive following the car’s debut, depending on which version you believe – and this embarrassment was enough to send him back into the arms of Stuttgart and his preferred W186 Mercedes 300.

It had been a fine effort although not a cheap one, a price list issued at the same time as the Frankfurt show listing the 505 at DM12,900 (presumably this was just for the chassis, with plenty more required for the coach-built bodywork: a six-cylinder 501 cost DM12,500 by comparison). But had it succeeded, it would have given BMW a much earlier foothold in the luxury limousine sector.

As it was, it would be almost two decades before they launched the E23 7 Series, the car that finally allowed them to compete with the dominant Mercedes-Benz S-Class. It was a classic story of what might have been, but one worth remembering all the same.