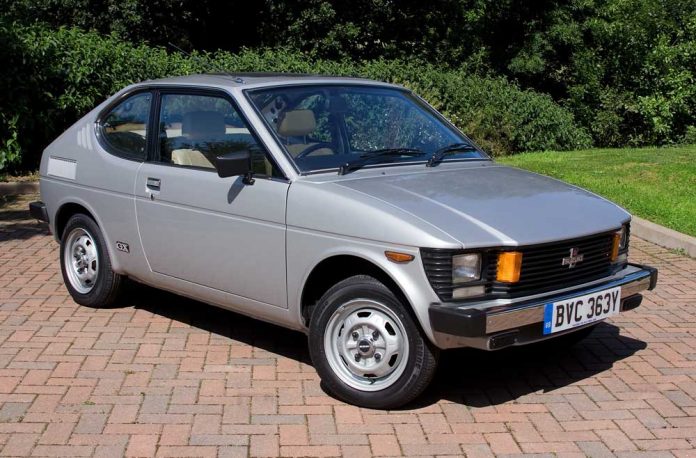 If you’re looking for a small classic with bags of character then it has to be a Mini, right?  Well, not necessarily. Look further east to Japan and the Suzuki SC100 might just fit the bill, and unlike the iconic Brit, it also has rarity on its side.

Launched in its home market as the Cervo back in 1977, this diddy coupe arrived in the UK two years later badged as the SC100. Known affectionately as the ‘Whizzkid’, its 970cc, four-cylinder engine was mounted at the rear and produced a modest 47bhp. That translated to a top speed of 85mph and 0-60mph in 16.5 seconds, but while that means you’re unlikely to be troubling a Speed Awareness Course anytime soon it’s worth remembering that it only weighs 655kg.

So it feels far perkier than those numbers suggest, and thanks to pin-sharp rack and pinion steering and all-round independent suspension there’s plenty of fun to be had when the road turns twisty. In fact, it rides and handles with a much greater degree of aplomb than you might expect and wringing every last ounce of performance from the revvy motor is guaranteed to put a smile on your face.

Head inside and you’ll find a cabin that’s a far cry from the ultra-basic Mini, not to mention one that boasts a far better driving position. Compact but decently comfortable, the GX trim of UK models meant buyers got to enjoy the delights of reclining seats, a heated rear window, cigar lighter and push-button radio.

The Whizzkid might have been small – it was about the same length as a contemporary Mini but both narrower and lower – but it certainly didn’t lack charm or appeal. And much the same can be said today.

Around 4700 were brought to the UK before sales ended in 1982, but with rust doing for many of them that number has dwindled to barely one hundred. So you might have to search hard, but we reckon it’ll be worth it. You’ll end up with a classic that’s sure to attract plenty of attention at your local car show, and as long as you avoid one suffering from terminal corrosion the simple mechanicals and nigh-on 50mpg economy means it should be cheap to run, too.

We wouldn’t blame you if the lure of the Mini proved too strong, but try this cute Suzuki and you might just be smitten.