FeaturesFeatured ClassicsHealey By Caton – Not a Restomod? 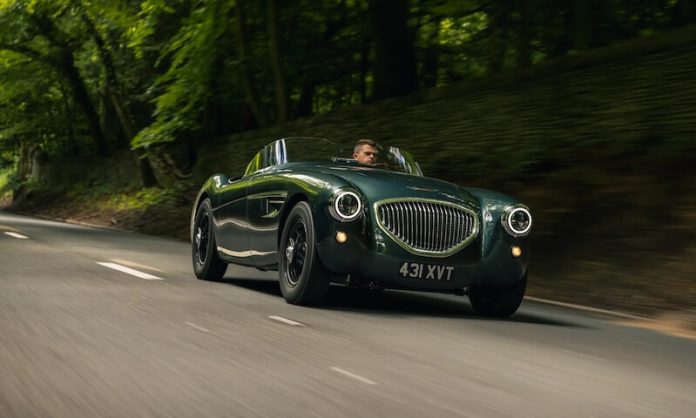 With so many Restomods entering the market motoring TV presenter and journalist Alex Riley, explains why Caton have got it right with the Healey…

Every Tom Dick or Harry seems to be chopping cars about and doing ‘Restomods’ these days.  The best ones really amplify the spirit of the original car and make it even more desirable.  But swap in too many modern bits and you can end up with something generic,  and the car’s unique character is lost.  At that point you might as well get a completely modern chassis and put an old-style body on top.  A bit like the David Brown Automotive Speedback GT.

But the Healey by Caton takes a different approach, staying very close to the original specification and sensitively enhancing it.  It might not even be a restomod at all.  It’s built by the Envisage Group, not some back street garage business, but a firm that builds one-off show cars for major car manufacturers.  Which they can’t talk about.  So the Healey by Caton lets them show what they can do and get the plaudits themselves for once. 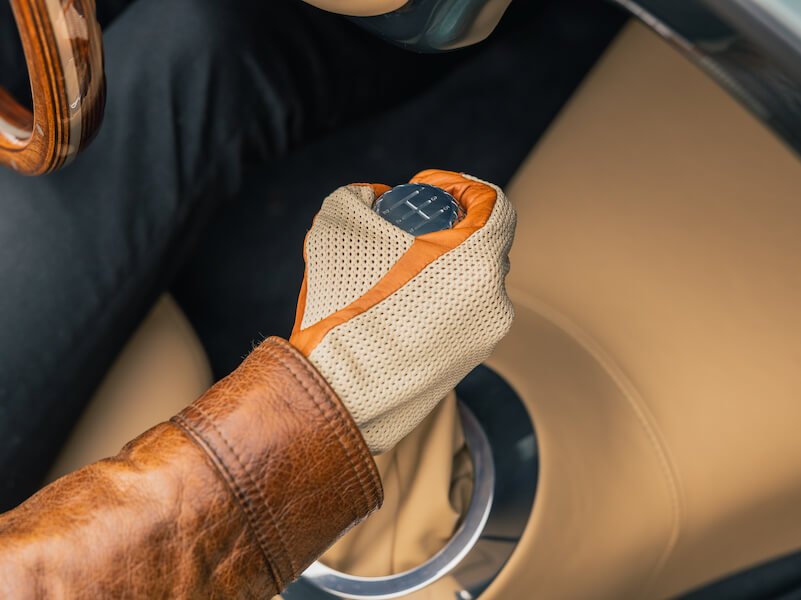 In fact Caton’s stated aim is to put themselves in the mind of the car’s original creator Donald Healey, and imagine how the Healey 100 would have turned out if he’d had access to modern tools and manufacturing techniques and, presumably, lots of money.  Which means, LED headlamps aside there is nothing on the car that he wouldn’t recognise or understand.

So there’s no crate motor from a Corvette, carbon fibre panels, independent rear suspension, wings or daft 20” wheels.  In fact, the chassis, body, engine and suspension all closely follow the original design, but are subtly upgraded and built and assembled to much closer tolerances.    Which means it still runs on carburettors and has a leaf sprung live axle and lever arm dampers.  Lovely.  So what’s the difference between a Caton and a regular Healey? 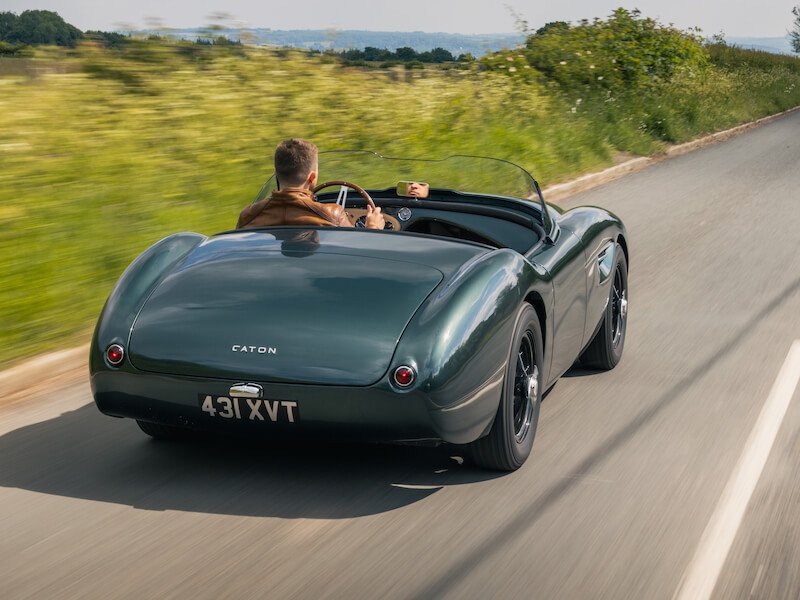 The starting point is an original Healey 100 BN1, produced between May 1953 and August 1955, so the car maintains its original identity and is tax exempt.  The aluminium body panels are hand-made on an English wheel by Envisage – who made the bodies for the D-Type and XKSS continuation cars for Jaguar.

Apart from a new machined from solid grille, LED headlamps and a larger chromed side vent bearing the word ‘CATON’, it looks just like a Healey. But look closer and the bonnet has more curvature, flowing more seamlessly into the front valance which now extends lower, covering more of the frame.  And the rear wings are slightly fuller, the overall effect giving the shape more muscle, without descending into caricature.

Designer Darryl Scriven (who until recently designed McLarens), puts it this way “I tried to think how the Healey would’ve looked if Donald Healey could’ve built the car just like the original clay model without all the compromises inherent in mass producing cars to a price in the 1950’s.”

So all the exterior hinges, bumpers, seams, rivets and handles have been removed, resulting in a beautifully clean shape.  Tyres are classic 185/70VR15 Michelins and the wheels are painted wires.  They look perfect and fill the wheelarches better than on any Healey I’ve ever seen. 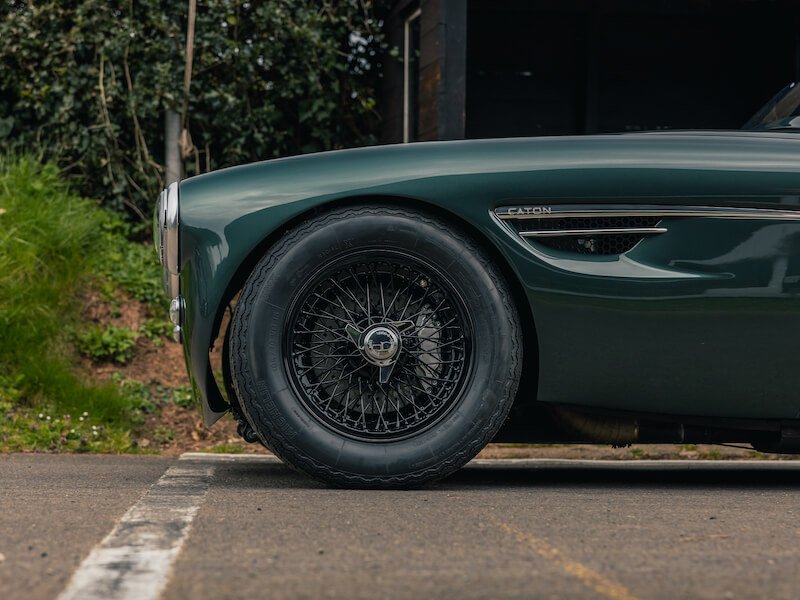 So it looks great, but what lurks underneath that shapely skin?  Does it drive any better than a well-kept original? Wisely, Caton has developed the mechanical enhancements with JME Healey who inhabit the original Healey Cape Works in Warwick and whose founder, Jonathan Everard was a Healey apprentice.  JME have a long track record in restoring Healeys and improving them.  They start by strengthening the original chassis frame and beefing up the front and rear bulkheads.

Front suspension is changed to an adjustable double wishbone set-up, but the live-axle keeps its semi-elliptical leaf springs with improved lever-arm dampers.  There are also rose jointed anti-roll bars front and rear and AP Racing disc brakes all round. 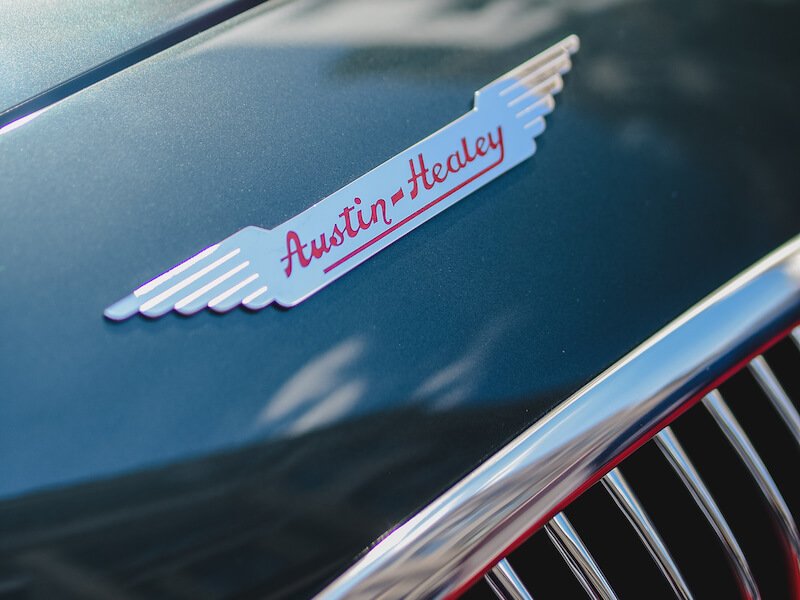 With its wraparound Perspex screen (dipped in the middle like the Austin-Healey badge) the overall effect is very much that of a 50’s sports racer in low-drag Le Mans trim.  In fact it reminds me of the fabled Healey 100S of 1955 – a 90 kilo lighter special with more power, a better gearbox, all round discs, no bumpers and a Perspex screen – built in tiny numbers for customers who wanted to go racing.  The S stood for Sebring, where a prototype finished third overall in 1954.

And the engine?  Standard Healey 100s used the torquey 2.66 litre four cylinder engine from the Austin A90 Atlantic.  JME keep the original block and take it out to almost 3litres, and double the power to 185bhp with 195lb/ft of torque.  Which should be plenty.  The exhaust exits under the door on the left hand side, so this should be one Healey that doesn’t scrape its exhaust on the road.  It weights 920kg. 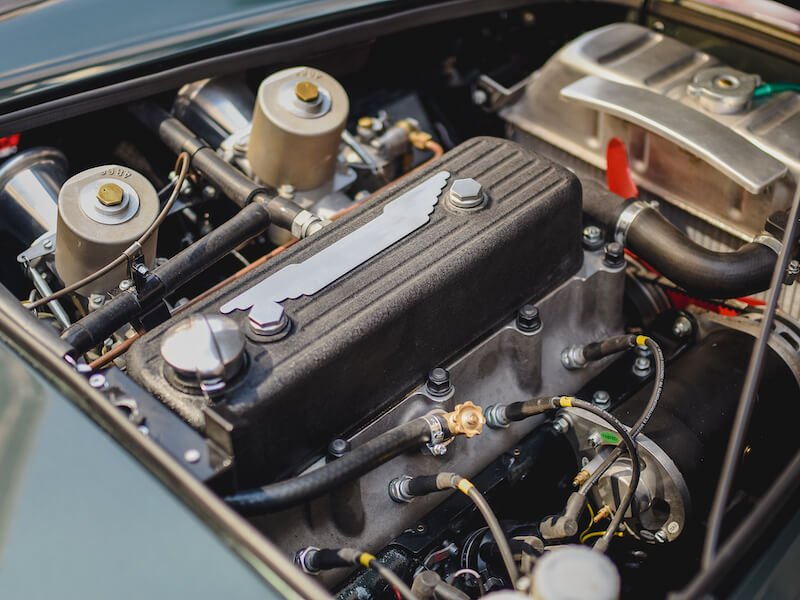 Thankfully, the 3 speed with overdrive gearbox with a long bendy gearstick sprouting from the left footwell has been replaced with a modern Tremec five-speeder which also frees up space.

The only jarring point – assuming you like the led lamps and grille – is the gearknob surround.  There’s a little rubber tray with a sort of honeycomb motif on it and there’s nothing 50’s about it at all.  But before cancelling my order, I’d speak to Caton – the Envisage Group make complex one-off show cars all the time so have a whole team that can realise your every whim, all within the list price.  So, I’d probably go for something in Bakelite or Formica.

The cockpit has increased legroom and storage, but there’s no hood and the interior isn’t waterproof, so they recommend carrying a towel, though they’ll soon offer at least a tonneau cover and a heater if you want one.  However, a lot of enquiries so far have come from North and South America where there are more sunny days.

So, the Healey by Caton isn’t really a restomod.  And it’s all the better for it.  It’s a clever reinterpretation of an early 50’s Healey 100.  It goes a lot faster, drives better and looks great, but manages to retain the character of the original car.  It might even start a new trend.  Maybe we need a new word.  How about ‘Restopretation?’  No?  Please yourself.

The Hagerty Festival of the Unexceptional enjoyed sell-out success at Grimsthorpe Castle on Saturday, with record attendance and hundreds of unexceptional cars on display. Hagerty created...