Mike Brewer Motoring looks at the 1970s 'Hot Hatches' that rivalled the GTi.

The inaugural Golf GTI entered production in 1976, to special order only initially, as Volkswagen’s management was still cautious and unconvinced about the commercial acceptance of this new higher-performance derivative.

They needn’t have worried, as the Golf GTI quickly flew out of the VW showrooms to rapidly storm the autobahns and autostradas of Europe. Here in the UK, the GTI was available to special-order only at first, with left-hand-drive steering, and a loooong wait for RHD deliveries to commence in 1979. The UK went on to become one of the top-selling markets for the feisty VW hatch though, with the model becoming a 1980s motoring icon.

Perhaps it’s the phenomenal success of the early Golf GTI that causes most Brits to wrongly assume that the three-door VW has the world’s first hot hatch model. This is not the case though, as we shall now discover with this quick summary of nine other 1970s hot hatchback models, many of which pre-date now iconic Volkswagen’s Golf GTI.

In fact, the idea of a small but fast two-box performance car was pioneered in the 1960s by BMC with its Austin/Morris Mini Cooper S and later Leyland Mini 1275GT in the UK, with Abarth of Italy getting in on the act even sooner with its rear-engined Fiat 695 SS and 1000 TC tearaway twins, for example.

By the early 1970s, smaller booted three-box sporting family saloons such as the Ford Escort Mexico, Opel Kadett GT/E, Fiat 128 Rallye and Renault 12 Gordini were still the norm. Two-box booted performance derivatives like the Alfasud Ti, Citroen GS X2, and even the Austin Allegro 1750 SS, were growing in popularity at the time too, but with the more practical sporting hatchbacks quickly becoming the preferred choice of enthusiastic 1970s drivers. 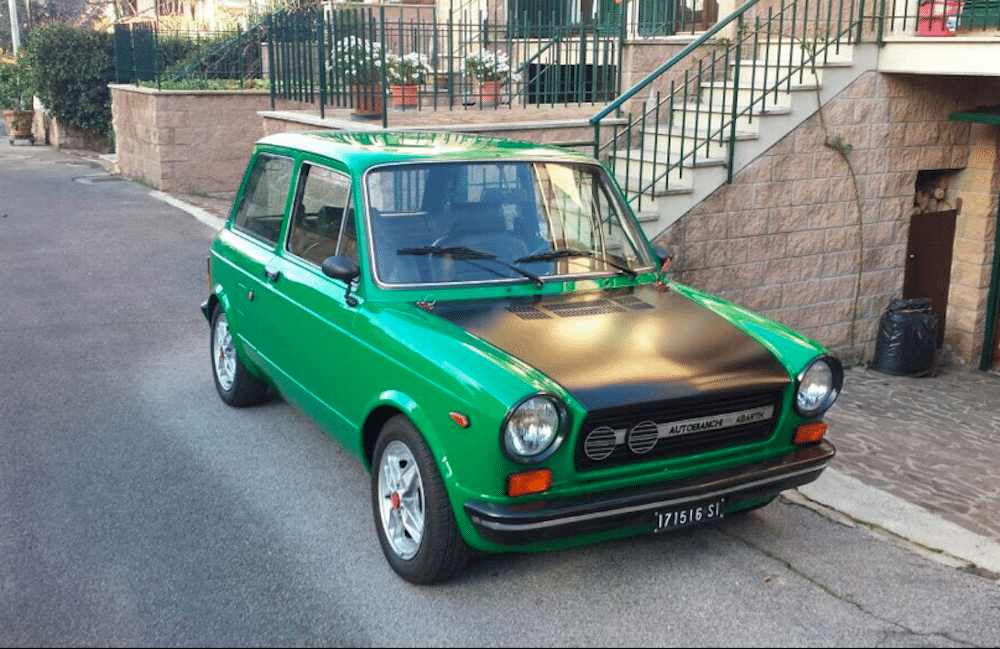 Arguably the very first true hot hatch, the spirted Autobianchi Abarth was launched less than two years after the 1969 debut of the ‘regular’ three-door A112.

During its lengthy 27-year production run, the A112 Abarth’s power output increased up to 70bhp, with a larger 1,050cc engine added from the Fiat 127. Other updates over eight generations of the model included a racy matt black bonnet and front spoiler. 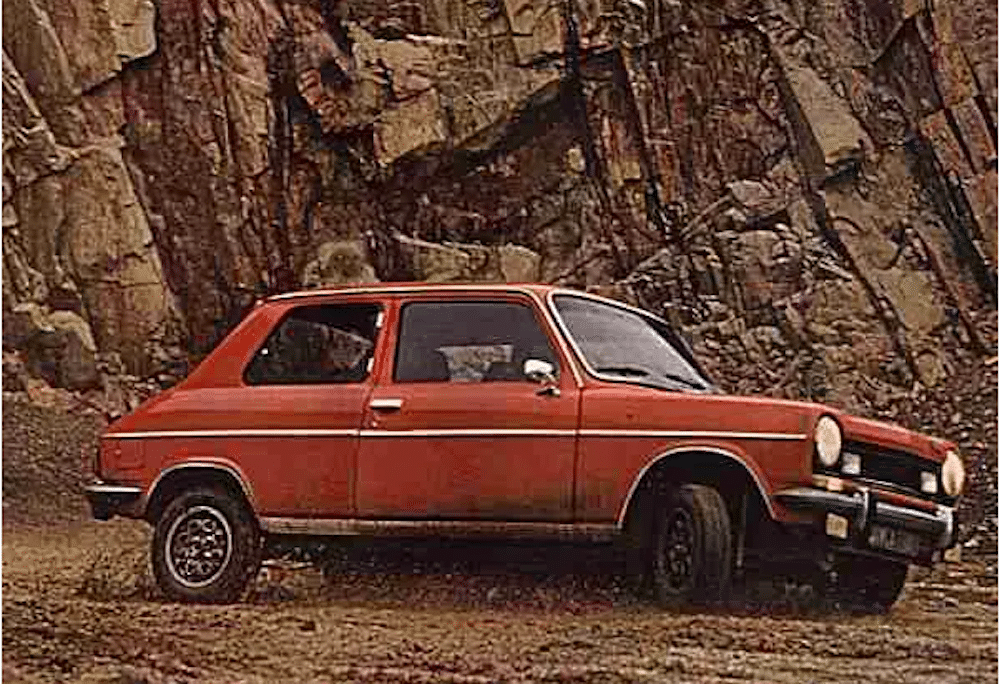 Generally overlooked as the original Golf-sized hot hatch, the Simca 1100 Ti was widely available for sale across mainland Europe in 1974 with 82bhp (up over 40 per cent from the 58bhp of the standard 1100 models) which dramatically improved performance with a top speed of 105mph, plus a 0-60mph time of sub-12 seconds; quite lively for the era.

Based on the 1100 Special three- and five-door hatch introduced in 1970, distinguishing features of the Ti performance model were its six headlight and foglamp arrangement, as well as distinctive alloys, front and rear spoilers, a sportier interior, plus front disc brakes. Ahead of the 1100 Ti, in 1970 Simca dipped a toe tentively in the performance hatch arena with the 100mph 1204, a practical hatchback that easily outpaced many traditional sports cars of the time, such as the Triumph Spitfire, MG Midget and Fiat 850 Spider. 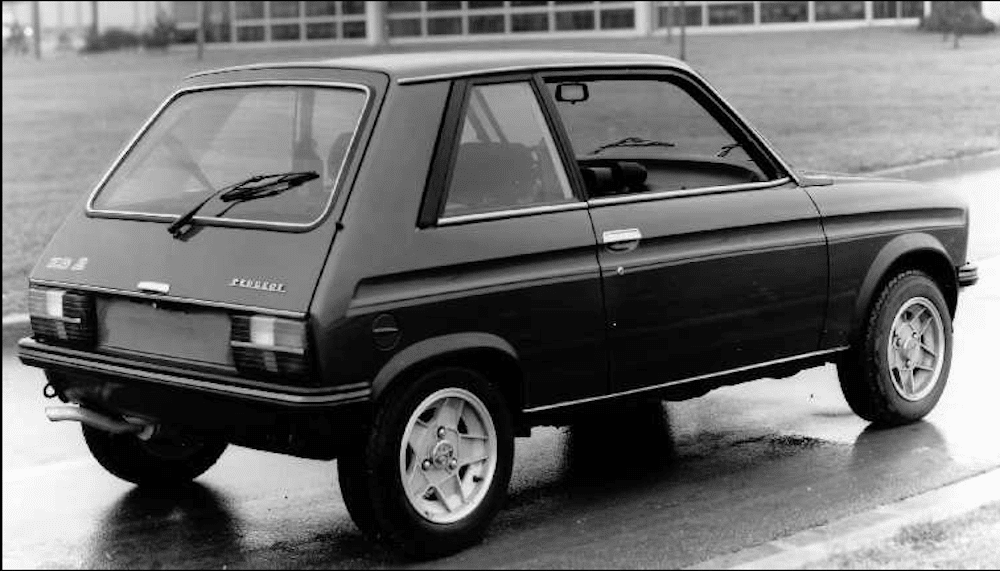 With crisp Pininfarina styling and even crisper handling, the little Peugeot was widely reported as a latter day Mini Cooper S at launch, with the sporting 104 acting as a role model for the cult Peugeot 205 GTi, the hot hatch of the 1980s, as well as the basis for the lively Talbot Samba S and 110bhp Citroen Visa GTi hot hatch models that followed. 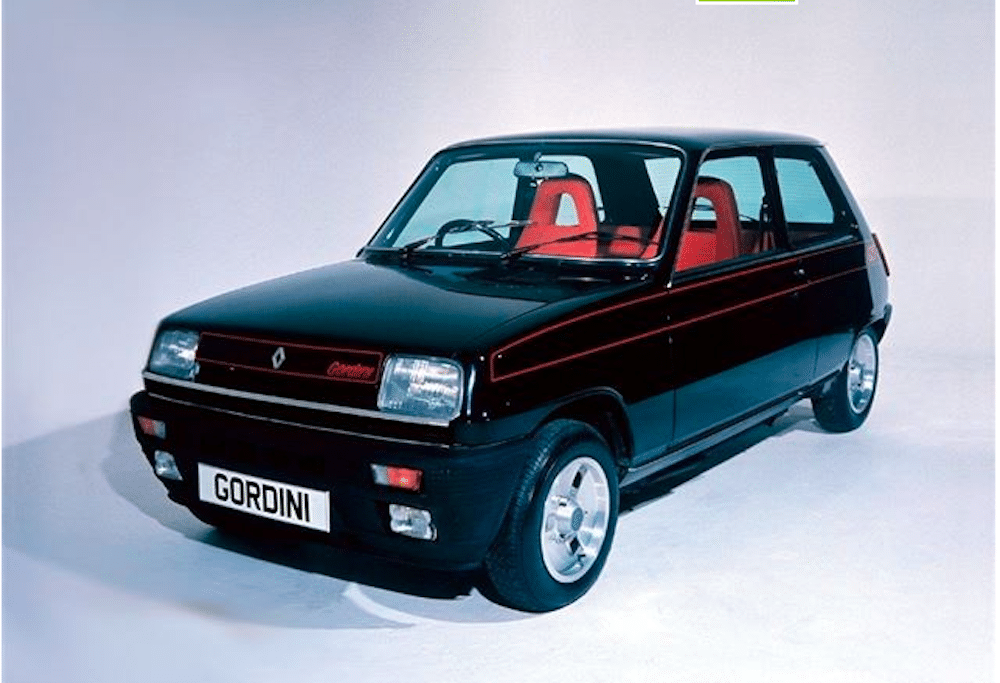 Just a few months ahead of the production start of the VW Golf GTI in the summer of 1976, Renault launched its own hot hatch rival in the form of the smaller (and more affordable) 5 Alpine, re-branded as the 5 Gordini in Britain from 1978, due to Chrysler owning the UK rights to the Alpine name, and called the 5 Copa (Cup) in Spain.

Assembled at the famous Alpine factory in Dieppe, this energetic 5 was powered by a 1.4-litre engine, developing a healthy 92bhp. This was a significant increase over the 36bhp of the base 5 model, with the best-selling 950cc 5TL generating 45bhp, and the semi-sporting 5TS making 64bhp.

Introduced in the UK through poster ads claiming ‘If it had wings it would fly’, the competitively-priced 5 Gordini (launched at £4,149 in 1978, around a bargain £16,700 in today’s currency) offered with a generous specification, including a tuned 1,397cc engine and suspension, with stylish polished three-slot computer disc-type alloy wheels, a deep front spoiler with yellow fog lamps and high-backed red velour sports seats. The 5 Gordini went on to gain a turbocharger in the early 1980s. 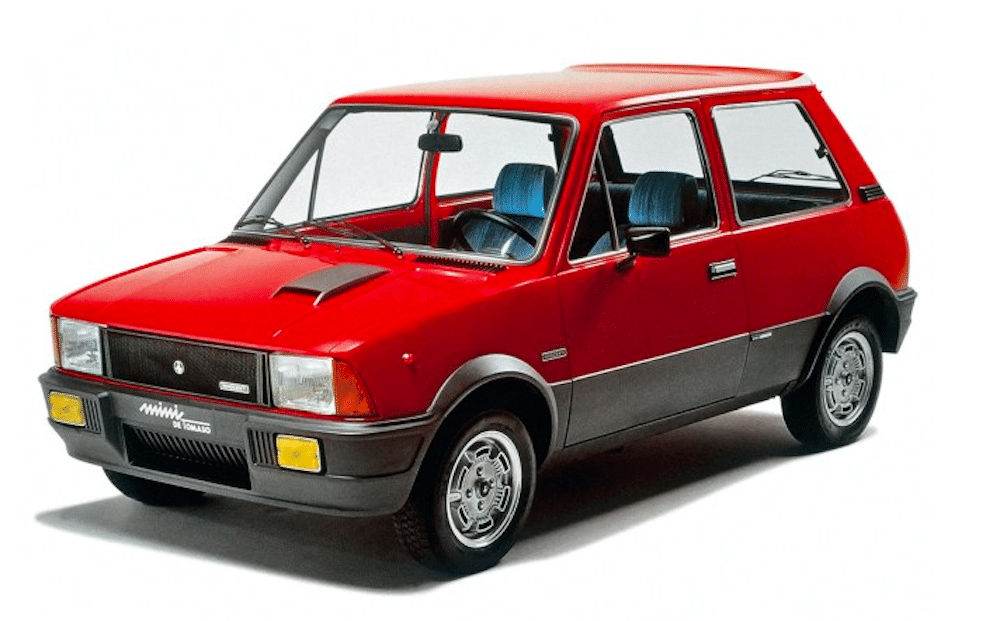 Making it first appearance shortly after production of the Golf GTI commenced in 1976, the perky Innocenti De Tomaso was based around a Mini Cooper with a 71bhp Leyland 1275 GT A-Series engine, wrapped around a delightful Bertone-designed hatchback body. Over time Innocenti increased the De Tomaso’s power to 76bhp, making for an excellent power to weight ratio in this featherweight hatch.

Innocenti was heavily impacted by British Leyland’s financial troubles during the 1970s, firstly creating the sale of the marque to De Tomaso, with a gradual reduction in the use of BL componentry, such as the Bertone hatch’s Mini engine. This ultimately forced the Milan producer to drop the familiar British components in favour of Japanese Daihatsu mechanicals, which Innocenti adopted for its revised 72bhp De Tomaso Turbo in 1983. 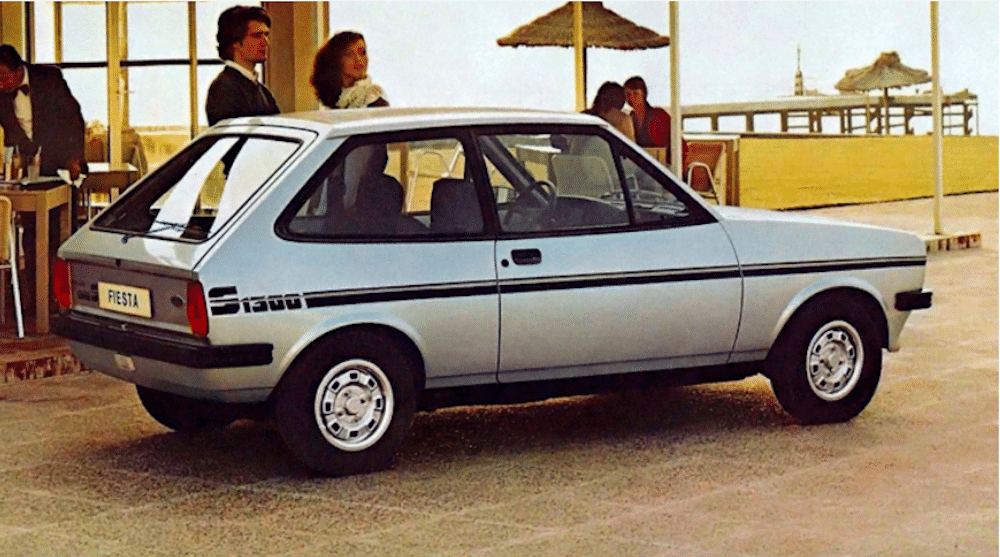 When Ford finally caught-up with its competitors by announcing its front-wheel-drive Fiesta hatch in 1976, a token sporting ‘S’ model immediately formed part of the introductory range. Using a breathed-on 1.1-litre engine, churning out 52bhp (with the entry 950cc model developing 45bhp) the 86mph Fiesta S carried the early flag for Ford’s first performance hatch, helped by its natty sports side stripes and ‘deck chair’ upholstery.

Later in the ‘70s a 1.3-litre S was added to the Fiesta family, with the eye-catching Supersport appearing in 1980. The Supersport pathed the way for the first true Fiesta hot hatch performance derivative, the 1.6-litre, 82bhp XR2 of 1981.

This gutsy XR2 set the template for all future generations of high-performance Ford hatchbacks, from the Fiesta ST and RS Turbo models, through to various other sporting XR models such as the Escort XR3i and Sierra XR4i. 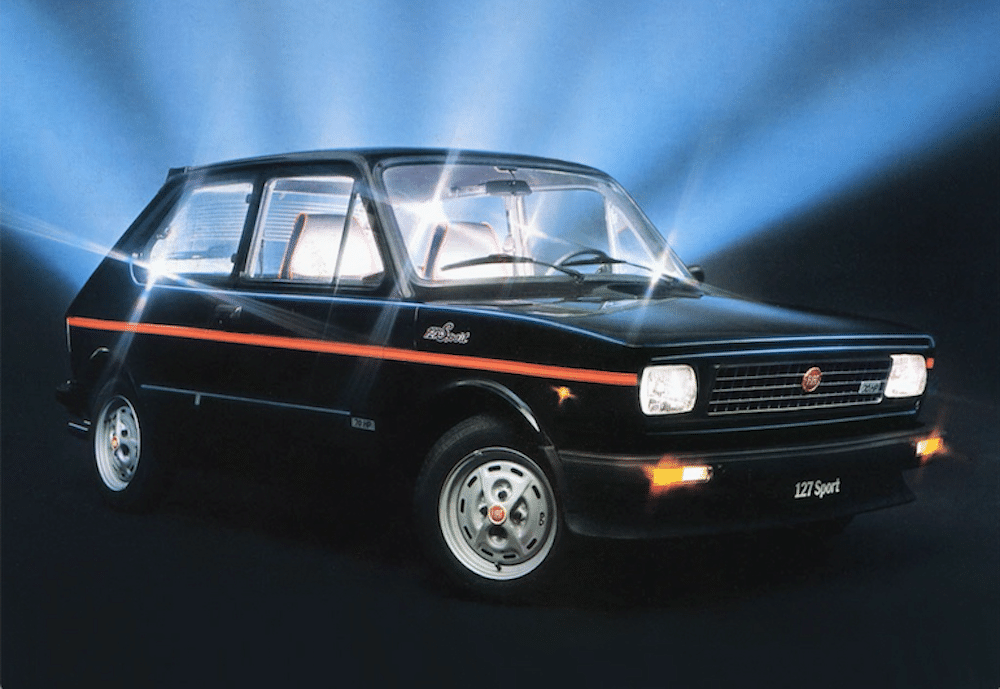 The 127 Sport was based on the second generation of Fiat’s most popular model (and Europe’s best-selling new car for most of the 1970s) launched in May 1977. The spirited Fiat came equipped with a split front air dam and tailgate spoiler, with its distinctive bodywork painted in either black with orange, blue or silver stripes, or bright tangerine orange with black stripes, plus matching interior upholstery. 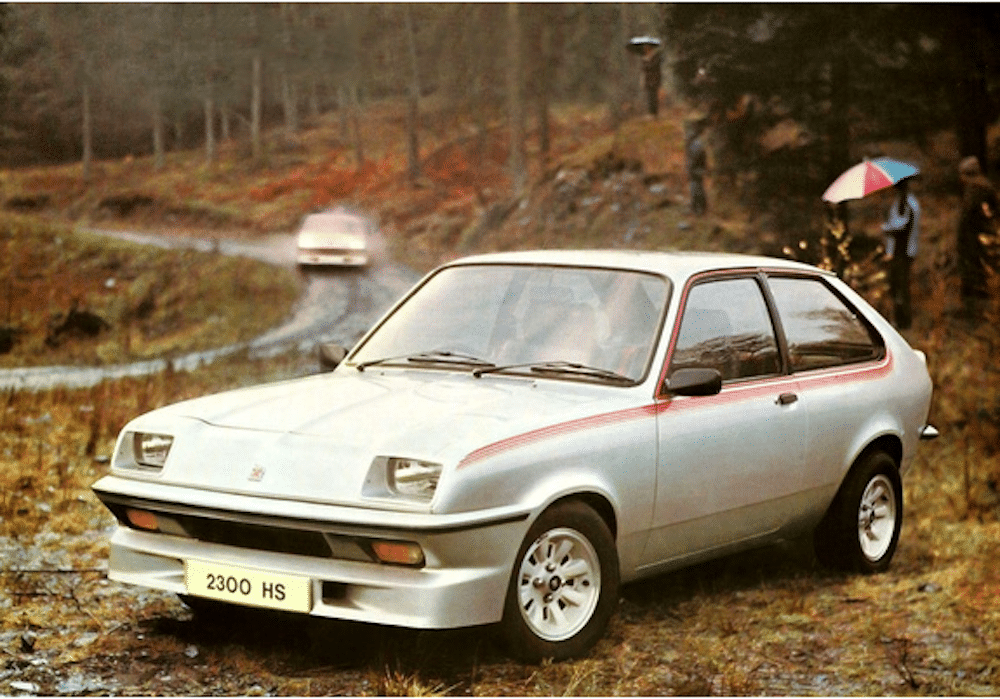 The rear-wheel-drive Vauxhall Chevette was Britain’s first true supermini hatchback model, launched in 1975, but with no performance derivates available until the HS 2300 homologation special appeared in late 1978.

A serious performance machine, created to enable Vauxhall to homologate the Chevette for international rallying, the limited production HS was fitted with a 135bhp 2.3-litre motor mated to a Lotus 16-valve cylinder head. Sold in metallic silver only with red trim and a matching red/black tartan and leather interior, the very hot five-speed Chevette HS was in a different league to the ‘regular’ stand-out front-wheel-drive Golf GTI and Alfasud Ti drivers’ cars of the day.

The 1978-81 HS 2300 proved to be only hot hatch derivative of the Chevette offered by Vauxhall, the later 1980s SRi, GTE and GSi sporting variants of the front-drive Nova, Corsa and Astra hatchbacks proving popular but lesser driving machines. 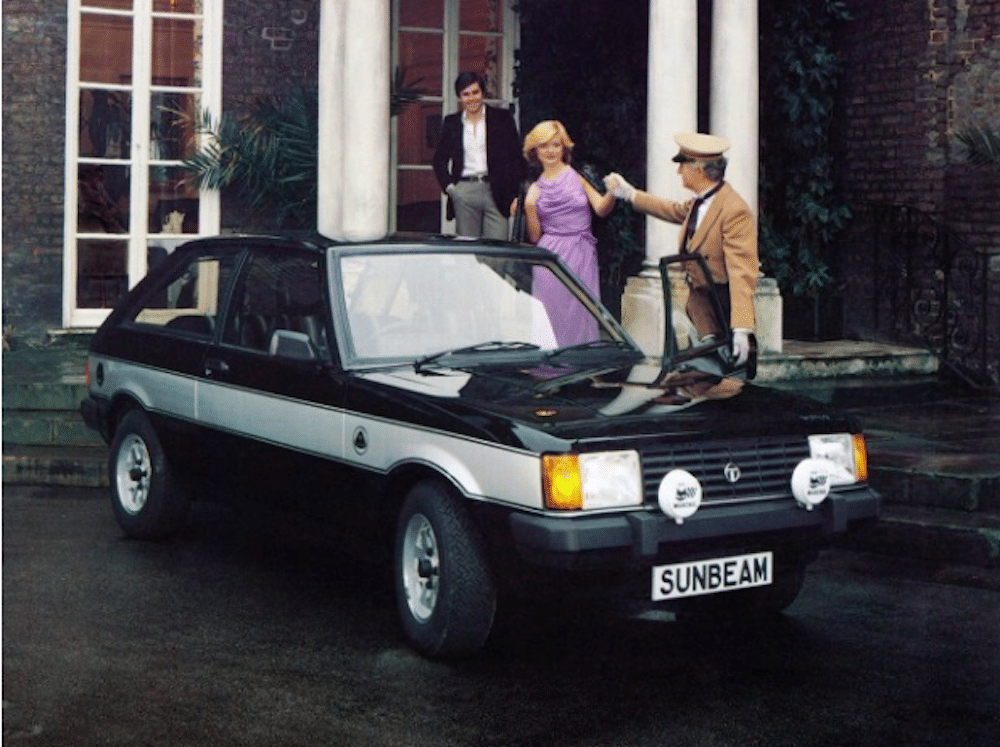 Like its British hatchback rival, the Vauxhall Chevette, the Chrysler (nee Talbot) Sunbeam was a simple and honest ‘back to basics’ rear-wheel-drive three-door hatch, developed quickly and on the cheap by a cash-strapped Chrysler UK in the mid-1970s, using as many Hillman Avenger parts as possible to reduce both costs and development time.

Two years after the launch of the mainstream Sunbeam range, Chrysler introduced the first of two hot hatch derivatives; the 1.6 Ti, with 100bhp on hand and the sporting model identifiable by front and rear spoilers, side stripes and distinctive four-branch black alloy wheels.

The following year, just as Chrysler sold its failing European business to former rival Peugeot for $1, the second high-performance Sunbeam hatch was ready to be revealed; the now legendary Sunbeam Lotus. Introduced by Peugeot under its revived Talbot brand name, this exciting two-tone 1979 debutant used a Lotus 2.2 engine, tuned to develop 150bhp in production trim, with the Works rally version pumping out a credible 250bhp, helping the model to win the 1981 World Rally Championship.

By the time Talbot had taken the 1981 WRC crown, hot hatches had become the default choice for discerning drivers seeking a fun but affordable smaller performance car, with traditional two-seater sports cars such as the MG Midget and Triumph Spitfire assigned to the history books.

The 1980s
Throughout the 1980s the choice and variety of hot hatches expanded rapidly, with the Peugeot 205 GTI becoming the star choice of that decade. The 205 was tackled by many other capable hatches at the time, such as the (by now three-door hatch) Alfasud Ti, MG Metro and Maestro, Renault 5 GT Turbo, Fiat Uno Turbo and Strada/Ritmo Abarth, Citroen AX GT, second-generation Golf GTI, Ford Escort RS Turbo, Nissan Cherry Turbo, Daihatsu Charade GTti, Opel Kadett GSi/Vauxhall Astra GTE, Lancia Y10 Turbo i.e., plus many others, all frantically burning rubber with savage torque steer, but ensuring hours of high-performance fun for their shoulder-padded drivers.