Wheeler Dealers host and Mike Brewer Motoring’s main man Mike Brewer shares an update on modifications being made to his beloved Porsche 911SC in California by Rasant Products. 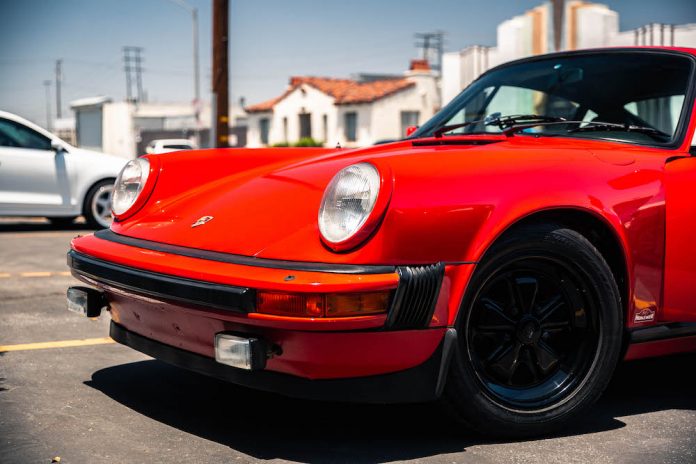 I’ve always been a Porsche nut, from a young lad selling cars I’ve just been obsessed. Problem is Porsche’s don’t come cheap! So I’ve had to wait until my middle age to be able to afford my own personal Porsche. Once I arrived in California to make Wheeler Dealers I knew that I needed a classic car to drive to the car shows here on a weekly basis. Trawling through the ads for weeks resulted in me dragging Mrs B, my poor wife Michelle, around to see several cars that didn’t quite live up to my high expectations.

One car located at Laguna beach just seemed ridiculous in the advert. It was a poorly taken side shot of a red 911SC with blacked out wheels. To be honest it looked too gangsta and the ad sat there for a couple of weeks. Driving back from another failed viewing, I said to Michelle, “Let’s go see it anyway,” so we did. The owner wasn’t bothered about showing me the car. He just stood there with a hose watering his garden and said: “It’s in the garage, help yourself.” Once the garage door opened, my jaw almost dropped to the floor! I’d never seen a more perfect SC. This car was beyond mint. Once I had scrabbled around underneath, I knew this was coming home with me. A short exchange with the owner and a deal was struck. I finally had the perfect Porsche 911.

That was two-years-ago and I’ve driven the car everywhere during that time. We even featured it on an episode of Wheeler Dealers, where we upgraded the exhaust. Problem is once you start you can’t stop! Like most Porsche owners, I just want more, and knowing that these cars are so well supported here in California had me looking at what else I could do to upgrade my baby. At several of the shows I’ve visited since I’ve been here, I’ve bumped into a guy called Andrew Darud who always has a crowd around him and his car. He has a backdated 1975 911S that is the envy of every 911 owner.

It’s red, with an alcantara dash, a tuneable digital gauge LED cluster, Roll cage, period Recaros, stripped floor with the odd hint of race wear. Then you walk around the back and that’s where all the fuss is – a smoothed perfect engine bay, with the nastiest looking flat six you ever clapped eyes on. This thing looks fast just sitting there.

The engine is made up of developed race parts that Andrew has engineered himself in his own business Rasant Products, based in Long Beach. It’s what happens when Porsche passion meets the pursuit of the perfect driving experience. Andrew and Rasant are committed to offering fellow enthusiasts the highest quality performance parts tailored to meet the needs of each unique car. Their ultimate goal is to assist you in enhancing the joys of owning, driving, and customizing your vehicles with throttle bodies, engine management systems, Plenum or Trumpet intake systems. Each look like jewels and eye candy for anyone like me who wants more out of their car.

After chatting to Andrew, he said: “Let me loose on your SC and get you to where you want with it.” I didn’t need acking twice! So after a final blast in what was my stock SC, I took it to Rasant Products HQ. Out the factory, it would have had around 200HP. Andrew guessed that would be down to about 160hp now, so the first thing was to get a benchmark for where the car is today. Guess what, Andrew knows his cars and it dynoed out at 159HP at 5500RPM. So now we know where we are, we start discussing what we can do and this is what Andrew recommends:

Intake system: Rasant Products IS-6 42mm throttle bodies with 964 resonant plenums. The throttle bodies increase throttle response and improve airflow for more horsepower. The plenums with their resonant valve improve mid-range performance by modifying intake volume at different speed/load points. The resonant valve is controlled electronically via the ECU to dial the system in specifically for each engine.

Work has begun and I’ll have an update when its complete.. I can’t wait! Originally from Minneapolis, Andrew attended Michigan Technology University and graduated with a degree in Mechanical Engineering. Andrew actively participated in MTU’s SAE Formula Racing Team during his time in Houghton, which offered him the unparalleled opportunity to design, build, and test race cars. After graduation, he accepted a job offer to work at Honda R&D as a powertrain design engineer.  A few years later he decided to take his career to the West Coast, packing up and moving to Los Angeles to join the thriving Southern California car culture.

Andrew has always been especially drawn to the air-cooled 911’s, as he believes they offer one of the most thrilling and driver-centric automotive experiences. Rasant Products was born after he designed, built, installed, and tested the proprietary engine control management system in his 1975 911 and saw inspiring results on the first dyno run. His goal has been, and will continue to be to consistently improve the driving experience- to make cars go faster, handle better, and perform with greater reliability.