The MGB is dead….long live the MG4

Alex Riley gives us his thoughts. 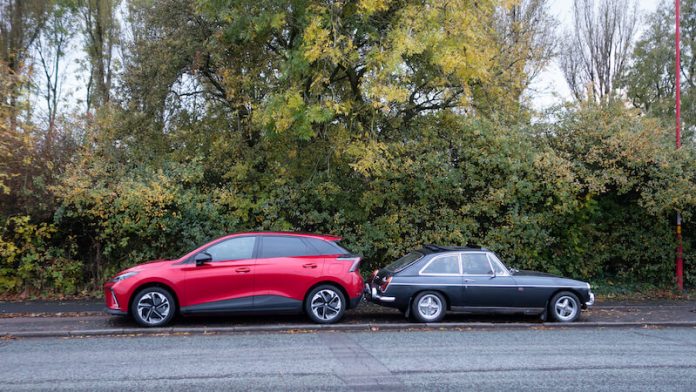 A much-loved British marque, which made souped up family saloons, broke speed records, won races and built the world’s favourite roadsters. It should’ve been massive. But we messed it up and let it wither and fail. MG4

Of course, you can buy a new MG, but any link to Oxford or BMC is long gone – it’s just one of several brands belonging to the Chinese state-owned SAIC, the eighth biggest car company in the world.

But having bought this storied marque, MG Motor, as it’s now called, has ignored all that history. Save for a brief revival of the MG TF, they quickly dropped any notion of making sportscars or even ‘sporty’ cars, and instead ruthlessly exploited the market for affordable SUVs and electric cars.

And, frustratingly, it’s worked – so far this year UK sales have grown by 70% and they’re selling more cars than Skoda, Seat, Renault and even its former BL bedfellows Mini, Land Rover and Jaguar.

I can’t help feeling a bit upset by this. That a Chinese company can make a success of a once great British brand by effectively ignoring everything that made it great.

And sales could be about to hit the stratosphere. The new MG4 EV is better in several key areas than the similarly sized VW ID3 and monthly payments are much much cheaper.  Unlikely as it seems, an electric hatchback, and not the MGB, might actually be the car that comes to define MG to future generations.

Now as someone who loved and passionately defended MGs from the Austin Rover days right until the end, this is confusing. On the one hand it feels exciting – like the underdog MG Maestro EFi trouncing the overrated and overpriced Golf GTi in an 80’s group test. But it’s not the same at all – it’s just that famous badge stirring my emotions, when actually the achievement is solely Chinese.

But if I’m confused and uncomfortable, what about died-in-the-wool MG fans?

To find out, I borrowed an MG4 and drove to Birmingham to ask my mate, serial MGB owner John Lakey, for his take on it. He currently has four ‘Bs’ and uses a modified GT as his daily driver. And you know what, he’s not at all angry or even sad. He’s just pleased that MG still exists at all, that its history is so powerful the name was worth buying in the first place.

And to think that back in 1982, some MG types were up in arms at an MG-badged version of the Austin Metro….

Of course, he’d rather ‘MGs’ were still built in Britain, but he’s just relieved you can buy cars with an MG badge on them, and the name hasn’t gone the way of Riley, Wolseley, Austin, Morris, Vanden Plas and so many others. He’s also noticed MG3 and MG6 owners coming to MG events and hopes MG Motor’s success will get a whole new demographic interested in ‘classic’ MGs.

And the MG4? Well, it looks good, goes well and drives nicely. The interior’s pretty smart, it’s well equipped and the squarish steering wheel is a lovely homage to the Allegro. John liked it too (the car, not just the wheel).

But the touchscreen infotainment drove me mad and the real world range of 215 miles (the WLTP figure is 270 miles by the way) was a total pain. I wasted an hour at Stafford Services charging up instead of getting to Birmingham, and another two hours the night before travelling around malfunctioning chargers near my house. But these are electric car issues not MG4 issues.

Now I know lots of things we buy are made in China, and MG does have designers and a few engineers in Britain, but really, it’s just using a much-loved and thoroughly British name to polish the image of a company owned by the increasingly authoritarian Chinese state.   British Racing Green-washing if you will.

Next year the waters get even muddier when they launch a 4wd 443bhp MG4 hot-hatch.  And in 2024 an electric roadster. Classic MG – style cars. But even if that roadster stays on sale for 18 years, is starved of investment and becomes hopelessly outdated, I’ll know it’s not a ‘real’ MG. No, it’s time I changed my patriotic allegiance to a company that actually designs, engineers and builds cars here in the UK. Like…Nissan.

Celebrate 60 years of the MGB at the British Motor Museum!