FeaturesMe and my car: Adam Enright and his 1983 Ford Capri

Press play and head for the mountain pass: Adam Enright tells Charlotte Vowden why the wilds of north Wales are the best place for listening to cassette tapes in his Ford Capri.

It’s more than three decades since the Ford Capri went out of production, but third-generation Ford fan Adam believes there’s no better (fair-weather) ride than his Mk3 when it comes to tackling the winding mountain roads on his way to work in north Wales.

“Listening to a grainy cassette tape through the speakers in a Ford Capri while driving a windy mountain road is one of the best things in life. There’s a big grass lay-by at the top of a hill near where I live in Caernarfon in north Wales that looks out over the bay towards the Isle of Anglesey. I pass through old mining villages and go past abandoned slate mines to get there, park up and watch the sunset with my music going. On a nice day I can see all the way over to Ireland.

These days people see it as quirky, but I like how down to earth the car is. There are no surprises hidden anywhere, it’s mechanical and it works. People are amazed that it’s got an analogue clock and love that it’s got a tape deck. They wonder how difficult it is to tell the time while I’m driving because they’re not used to having to focus on numbers and hands.

When I was a kid I never had an iPod or CD player, but I did have a walkman; I’ve always been a bit of an old soul. I like to think vinyl has had its comeback, and the age of tapes is creeping forward. A lot of bands put out new music in this old format now, and listening to it with the vintage twist of a cassette’s crackle and pop is great. I try to be a tidy driver but the glove box is absolutely rammed full of tapes, there are some on the back seats too, and there’s a plastic bag full of them in the boot.

I’m 24 and work for Adventure Parc Snowdonia as an electrical engineer. There are lots of opportunities for engineers elsewhere in the country, especially across the border in England, but I can’t move away from the area because it’s stunning.


There are some amazing roads on my commute into the Conwy valley, like Llanberis and Pen-y-Pass, and driving them in the Capri is brilliant. It takes me the same amount of time to cut through the mountains as it does to go on the dual carriageway along the coast; I can’t believe that people sit in traffic on their way to and from work when you’ve got drives like this on the doorstep.


The Capri isn’t my daily but I don’t see the value in parking it in the garage and keeping it pristine; I bought it to use it, drive it and enjoy it. Being rear-wheel drive, I tend not to take it out in the wet because it can be a little bit hairy on wriggly roads, but it does handle well and it’s great fun to chuck around.

My school friends had pictures of Ferraris and the Lamborghini Countach on their bedroom walls growing up, but I had old Fords. People say the Capri is Europe’s answer to the muscle car, which I think is a good description, and I loved watching The Professionals on TV because the characters ragged it round in a Mk3.

My mum brought me up and I spent quite a lot of time with my grandad; he was always there for me, he was my absolute hero. His name was Anthony and he was an engineer too, he taught me a lot about working on cars and I think he was a great influence. He arranged for me to work at a garage in his village over the summer holidays as a kid, I learned to weld there and spent hours sanding bumpers, wings and sills ready for painting.

Brand loyalty is dead because there are so many brands out there, and people don’t connect with cars in the same way anymore. We became a Ford family because grandad knew the family that owned the Ford dealership on Anglesey – that’s where I grew up, and that’s where my grandparents are from. My mum’s first car was a Ford fiesta and so was mine. I then bought a 99 Ford Cougar for £500 as a present to myself when I turned 21.

I got my Capri in June 2021 using money my grandad left me when he passed away. I think he’d appreciate the input he’s had on making a dream come true for me. It was £9,000 and worth every penny. I’ve taken it over to Anglesey a couple of times, there’s a nice view point over the Menai Strait towards the Menai Bridge, where grandad and I stopped one day for a bit of lunch. I went back recently and had a little “thanks for this” moment. 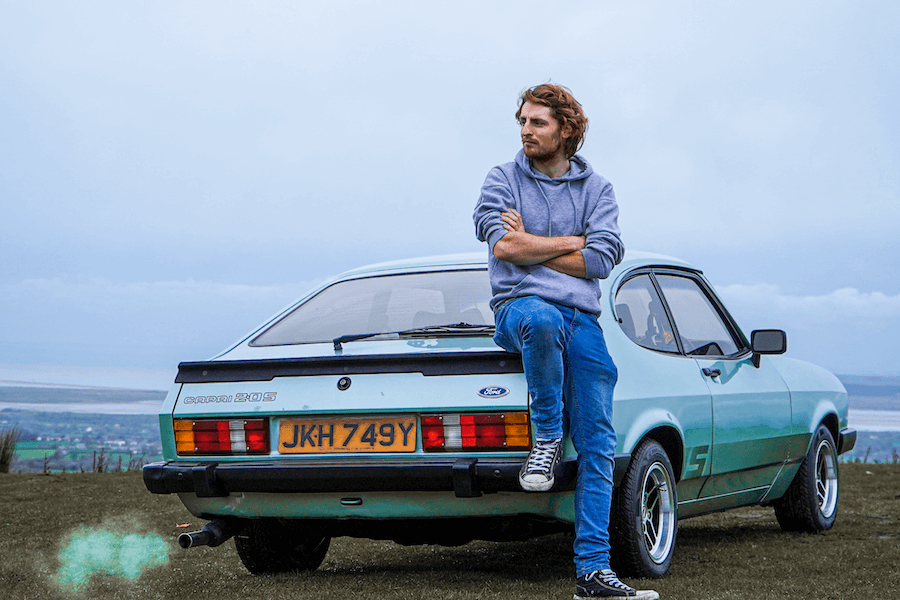 I wanted a Capri to do up myself, and although this one had already been refurbished, as soon as I saw it I knew I wanted it to be mine. I’d never seen one in this unusual emerald green and it looked so good in the sunlight, plus my grandad was Irish – I just couldn’t ignore the signs. I’d set out in the morning not meaning to buy it, and by the afternoon it was parked on my driveway. It was meant to be.

My Ford Capri is a 1983 2.0-litre S. It’s not got the big burbly V6 in there, but it’s a solid engine; when I pulled the dipstick out to check the oil before I bought it, it was clear as a whistle. The seller took me for a spin and it hugged the road, I didn’t expect such an old car to feel as smooth as it did. There was a little bit of play, so I put a new steering rack on it and had the tracking done.

Taking care of an older car gives you life skills that can be applied elsewhere, like problem solving and working with your hands, but sometimes on a cold morning when the Capri doesn’t want to start, a few stern words do help.

I don’t know much about its history, but I’d like to delve into it. I think I could learn a lot from previous owners and it would be great to find out if the car has done any massive road trips. The thought of spending two hours on a motorway to get somewhere else doesn’t really appeal, but I’d love to go to Germany because my grandad was based there for a while when he served in the RAF.

Locally, I’m now known as the guy with the Ford Capri. It’s pretty noticeable and one guy even called it “an absolute work of art”. It’s nice that people share their memories with me too, they’re often buried in the back of the mind until you see the familiar shape of a car, and if someone wants to sit in it, I say go for it. All my mates have been out in the Capri and my friend drives his three-year-old over to mine just so that he can sit in it. The horn is on the end of the indicator stork and he spends the whole time hammering it, beeping away and having a great time.

Both my grandparents were quite poorly before they passed away, but my grandad was especially ill. I used to work night shifts, and then be with him during the day, and I talked to him about buying a Capri a lot. The car has been good for me, and I think my mum loves it because she knows how much it means to me.”