FeaturesMe and my car: Aubree Jones and her ’57 Thunderbird

And just like that, this two-seater T-Bird transported its owner back to the fifties. 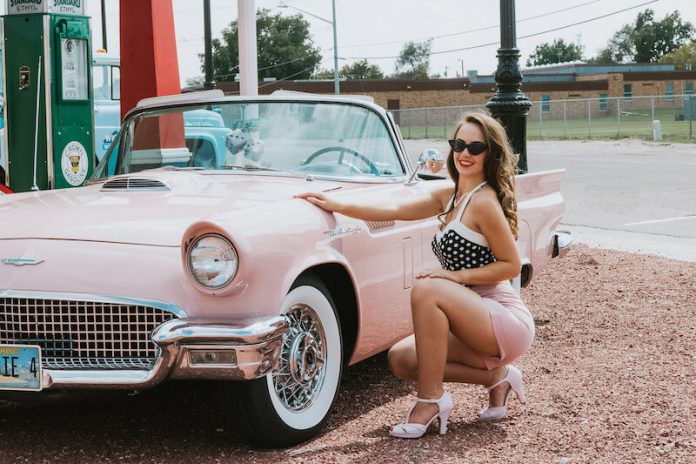 Over 5,000 names were suggested for this retro-futurist American car, but Ford stylist Alden Giberson came up with the winner over his morning coffee. It was revealed to the public as the Thunderbird at Detroit’s first post-war auto show in 1954, but for Aubree Jones, the decision was much easier, because her ’57 T-Bird’s elegant and iconic fifties style reminded her of her late grandmother, Edith.

“I am super obsessed with the fifties; I love the fashion, the music and everything about that period. I really feel like I’m connected to my Thunderbird when I dress up because, just for a minute, it’s like being transported back into her era; that’s pretty much my happiest place.

Cruise Nights, when people get together to go for a drive with their cars, are a big thing in America and they were a big part of my childhood. Every Wednesday we’d go for ice cream and a cruise around town, but I wanted to ride with anybody but my parents! I was four years old when I saw my first Thunderbird, it was summer, the sun was going down and we met up with some family friends at this old-school drive-in called A&W. I didn’t know what it was, but it was such an attention grabber; it was red, it was convertible and it had white vinyl seats. I asked my dad if could go ride in it and I was so small I couldn’t even see over the dash, but I remember my hair flying in the wind. It was the most awesome moment, I was like I’m going to have one of these, this is it, this is what I want.

I started looking for a ’56 Thunderbird in Peacock Blue when I was 18 and here I am, at 28, with a very special Dusk Rose ’57 that I found on eBay. It was in Marysville, Washington, which is a 17-hour drive away from where I live, so the guy selling it did a test drive video for me. As he was going along he turned the radio on to show me that it worked and Let It Be by the Beatles came on; that song has a significant meaning in my family because it was played at my uncle’s funeral. In that moment I thought, that’s my sign, this is my car, it’s meant to be. I was like OK, I got it, I got the message.

I had it inspected, went through a credit union to get financing, because you know, cars are expensive, and then my parents went out there with a trailer to pick it up. When dad gave me the keys I felt like I’d come full circle because my dream had come true. I cruised around with Bill, my fiancé, and the first song we played was Fun, Fun, Fun by the Beach Boys, I don’t listen to Let It Be in the car a lot because I tend to get emotional about it. The next morning I took her to her first car show.

I’ve always wanted to be seen and feel like I was born in the wrong era so I compete in Pin-up Pageants where girls dress in forties, fifties and sixties Pin-up style clothing. They’re usually part of a vintage car show with live music, dancing and sometimes burlesque, it’s so much fun. You’re judged on your appearance, your presence and how you answer certain questions, but I’m a big ham (I blame my dance background for that) and as a classically trained ballerina, stage presence is something that’s been drilled into me since I was three.

When I competed against 15 other girls at The National Street Rod Association’s Street Rod Nationals event in Pueblo, Colorado, I wore a bright yellow dress that was modelled on the one worn by Frenchie in the movie Grease – and won! On the way home, Bill drove the Thunderbird and I sat up on the back waving, and everyone waved back! When you’re in something that’s so distinctive, you really do turn heads.

Edith’s design is so space age, but her fins and her tail lights, or as Bill calls them, her rocket ships, are her best features, in fact her whole butt looks good – it’s so sleek and streamlined, unlike the ’55 and 56’ Thunderbirds which were quite round. She’s going to be the getaway car at our wedding in August but the emblem is flush against the hood so there’s not really any place to tie a ribbon so we’ll have a ‘Just Married’ banner on the back.

Edith, a D-Code Thunderbird, is a 30-year-old restoration with 32,000 original miles on the odometer – you would be able to tell if it’s rolled over because after 100,000 miles the numbers tilt up a little bit. I want to keep her looking as original as possible but give her some refreshes every once in a while, it’s what I like to call original intent. She didn’t come off the factory line with it, but she does have air-conditioning, and although it looks like a Town and Country vintage radio, hers is actually bluetooth enabled.

In terms of modifications, I swapped out the generator for an alternator because I kept having issues with power and as Thunderbirds are known for overheating I replaced the water pump with one that has more propellers to move fluid through the system, which now stays at a cool 180 degrees. 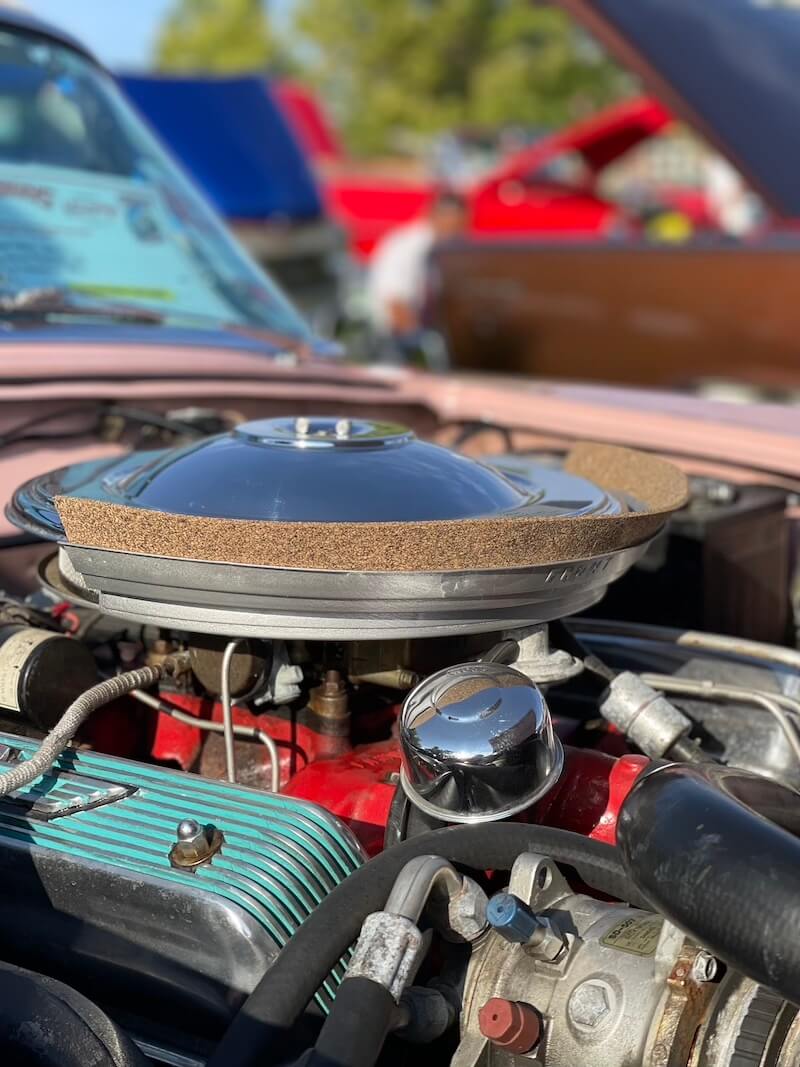 Edith’s four-barrel carburettor 312 V8 was a big motor in 1957, they were using it in race cars, so you would think with that under the hood she would be loud and angry sounding, but she’s actually very regal. When you step on the gas she gently glides you forwards and although she can be a little bouncy, she’s not rough.

Her power steering groans a little bit, but it works beautifully, and although her fuel mileage isn’t great compared to todays standards (she’s lucky if she gets 15 miles to the gallon) for a 1957 V8, it’s actually quite good. I won’t take her on the interstate because people drive like maniacs, but the back streets here are ginormous (roundabouts are the most foreign concept, most people don’t don’t understand how they work) and kept in really good condition.

Edith is named after my late grandmother and is definitely my lucky charm. She’s been in lots of parades and events and won an award at every single one; my girl is batting a thousand. My dad jokes that he can’t park next to me because everyone ignores his 1970 Mustang Mach 1 and goes straight to the Thunderbird. The guy that owned her previously told me ‘you’re gonna go places and you’re gonna make lots of friends’ and he was absolutely right, she’s very well liked. In my hometown I’ve become the girl that drives the pink Thunderbird, but I don’t like to brag or boast. If it comes up in conversation then great, it’s something to connect on.

In America people that have classics get together with people that have tuners because they share the same passion for cars, it’s a lot more inclusive than some people think. I say, if that’s your thing, more power to you. In Cheyenne, where I live, everyone meets at a parking lot on a Saturday night – whether they’ve got vintage cars or import cars like Toyotas or Subaru’s – and then there’s a loop that everyone drives. The licence plate I chose for Edith ‘2 DIE 4’ is pretty eye-catching; Wyoming codes their plates by county, from most populated to least populated, and Cheyenne is two. 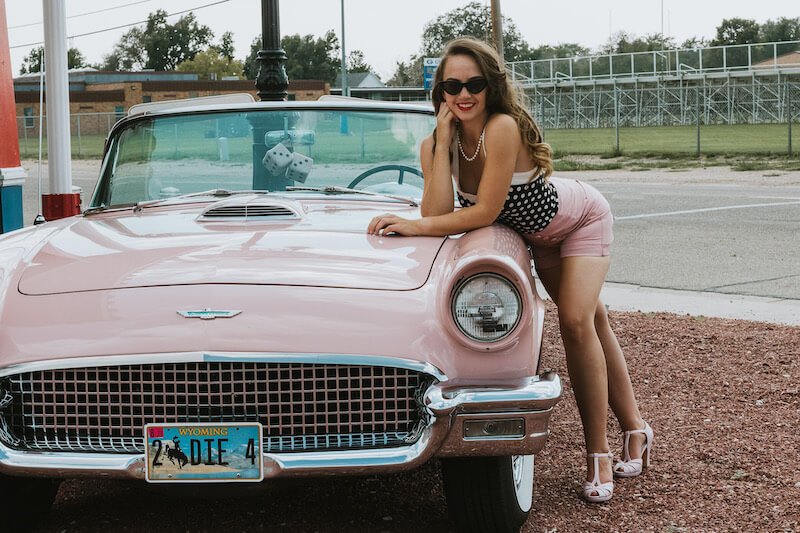 Owning a vintage car is a rollercoaster, there’s always going to be peaks and valleys, but the bad times teach you to appreciate the good ones even more. I’m very independent in the sense that if something goes wrong I’m going to get it taken care of no matter what, but I do become an emotional wreck. Recently, when I saw a puddle of transmission fluid all over the floor in our garage I automatically thought the worst, but it was just because she’d been stood still for a while and the pan had overflowed.

I do all the maintenance, but it’s nice to have a support group. Bill takes just as good care of that car as I do and we have friends that come over for a cookout and to work on the car. My parents live an hour and a half north of me so my dad can’t just come over and help, but we FaceTime every day so if there is anything going on I’ll show him. My dad had a 1934 Plymouth Sedan that he hot rodded out with a big old Chevy 350 engine when I was growing up. I remember the night my parents pulled up with it; I was starstruck, I had hearts in my eyes. In that moment, my life changed, I just wanted to be a part of that car culture. As I get older and settle down I’m keeping my eyes out for a classic I could daily. My dream car is a ’57 Pontiac Safari; it’s big enough that you could haul the kids around in it, but it’s not an SUV.

Thunderbirds were marketed as personal luxury cars when they came out because they were forty-five hundred dollars and that was a lot of money in 1957. Bill and I come up with all these wild stories about who originally owned my car, it had to be someone pretty rich, so was it this super wealthy guy that bought it for his wife, or his daughter, or even himself? We talk about what we think she’s seen, and imagine her being driven to church, or country club luncheons and parties by this fancy socialite. It’s nice to speculate, but imagine if she could talk, what kind of stories would she tell?”

Join the club:
Thunderbirds of England