FeaturesMe and my car: Lauren Elwin and her Austin Mini Mayfair

This Yorkshire lass, model and mechanic didn’t want her classic resto to be a trailer queen.

Walking and driving in six-inch heels is a skill, but so is stripping down and rebuilding your first car. To celebrate International Women’s Day, Lauren Elwin tells Charlotte Vowden how she’s redefining the car girl stereotype.

The Austin Mini Mayfair said hello to the world in 1982 and was described as a jewel of a car that introduced a new level of luxury to economy motoring. A favourite among female drivers, who tended to have less earning power than men, it was a fun and affordable way for women to find freedom on the road, and from the age of eight, Lauren Elwin knew she had to have one. To celebrate International Women’s Day, she reveals how restoring her little motor has given her the opportunity to promote female empowerment within the automotive scene

“A car girl can have the best of both worlds. I always carry a can of WD40 next to my lipstick in my bag; you never know when you might need either. Behind every insta-worthy photo the reality is that I work on my little yellow fella in grease-covered glory, and yeah, in summer, sometimes I do wear short shorts with CAT boots.

I was fifteen when I got my 1982 Austin Mini Mayfair ‘Sonny’. I’d been looking for one since I was eight years old; as soon as I saw The Italian Job I was sold. My dad, a fabricator welder, thought I wanted a BMW mini, but no, I wanted a real one, a classic. I wanted it to be a project for us to work on together. 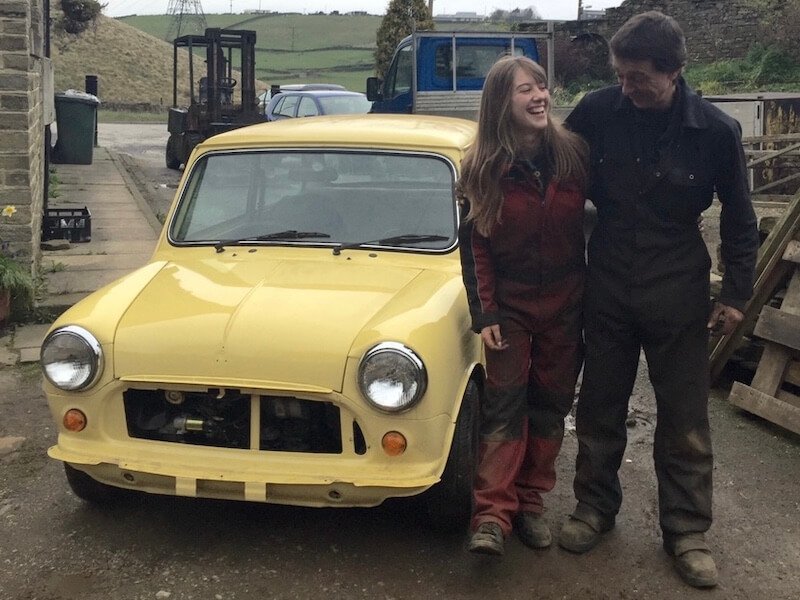 After a lot of searching, I found Sonny on eBay. He was advertised as running but had no front end. The photos were really unclear as he was in a garage covered in board games and general rubbish, but we thought, let’s take a risk. So, dad bought him for my birthday, unseen, which was a dream come true. Finally, I had one of my own.

I was at school when Sonny got trailered home. When I opened the workshop doors and saw him sat there for the first time, it all became very real. I’d always said I’ll never own a yellow car but ‘Primula’ yellow is really unusual; it’s a happy colour and it makes me smile. I knew straight away that Sonny would be a car I’d have forever. 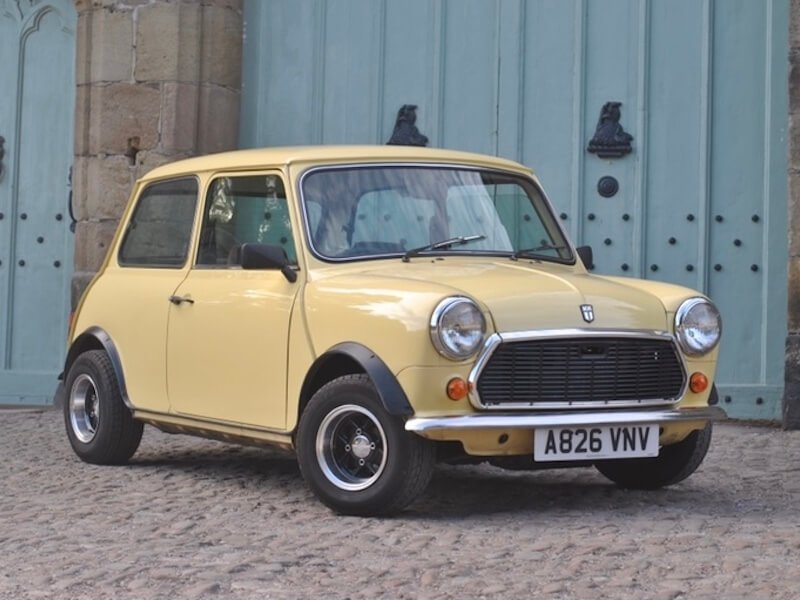 Dad has been building cars and bikes for years. I remember sitting on the wings of various Land Rovers passing him spanners and all kinds of tools from the age of four. He has been a massive influence in my life and those memories are where my passion for cars all kicked off. I learnt bits and pieces looking after the Suzuki LT50 quad that we would take off-roading, but the Mini was a whole new world. Some people say I’m the female version of my old man. Not sure if that’s a compliment or not, sorry dad! 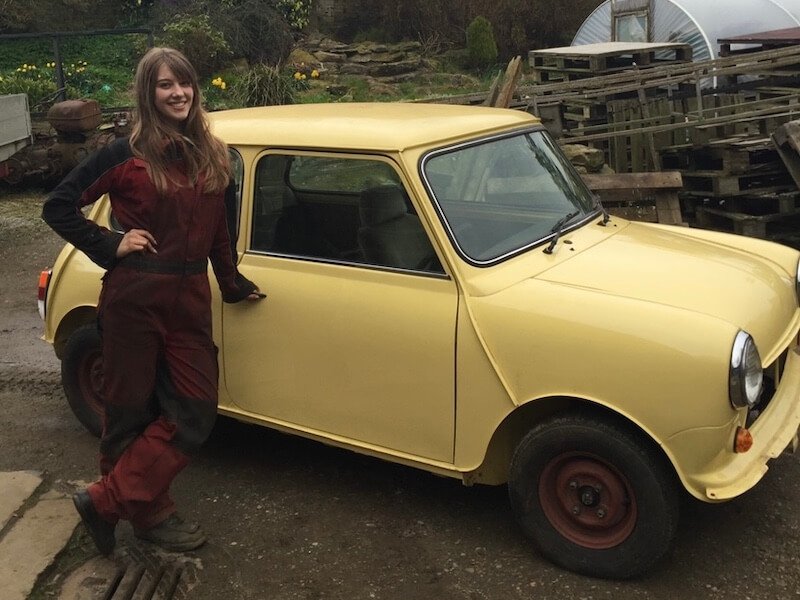 I knew Sonny wasn’t going to be a ‘turn the key and let’s go car’, he was a nut and bolt restoration, which I was excited about because ultimately, I wanted to be able to maintain, repair and look after him independently. The first thing I did was write a list of things that needed to be done. From the initial strip down, when I put all the parts in labelled boxes and trays hoping that I’d remember how it all went back together, to the first time we got the engine running, I enjoyed the journey of getting it back on the road. It about three years to complete, (but let’s face it, Mini’s are never finished!) and working with Dad was certainly an experience – we spent a lot of time laughing, and a few choice words may have been uttered, but we got there in the end. 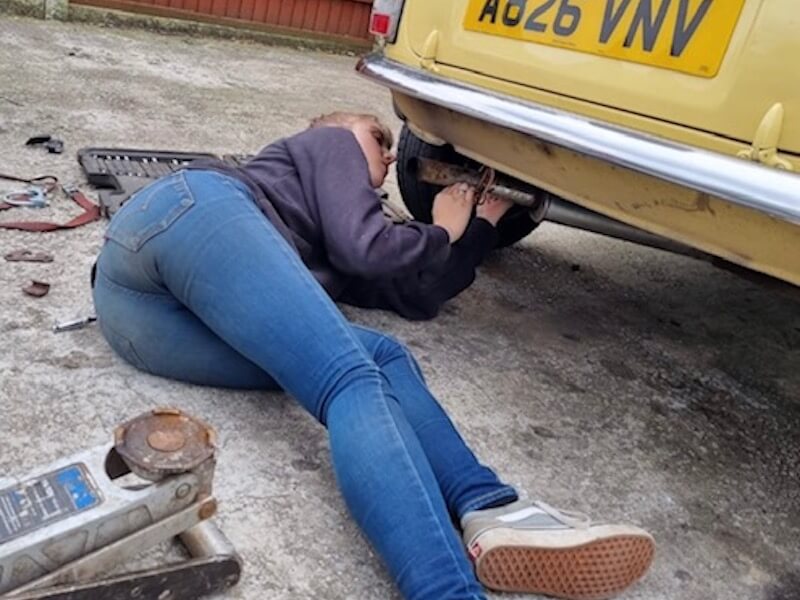 I kept the Mayfair as original as possible but changed the 998cc engine from automatic to manual. I wanted to feel like I was driving a proper car. For a vehicle that’s over thirty years old, he had surprisingly good floors throughout. They were covered with the original tar lining, that’s supposed to be for sound deadening, but is well known for trapping water, so I chiseled that out straight away to help prevent rust. 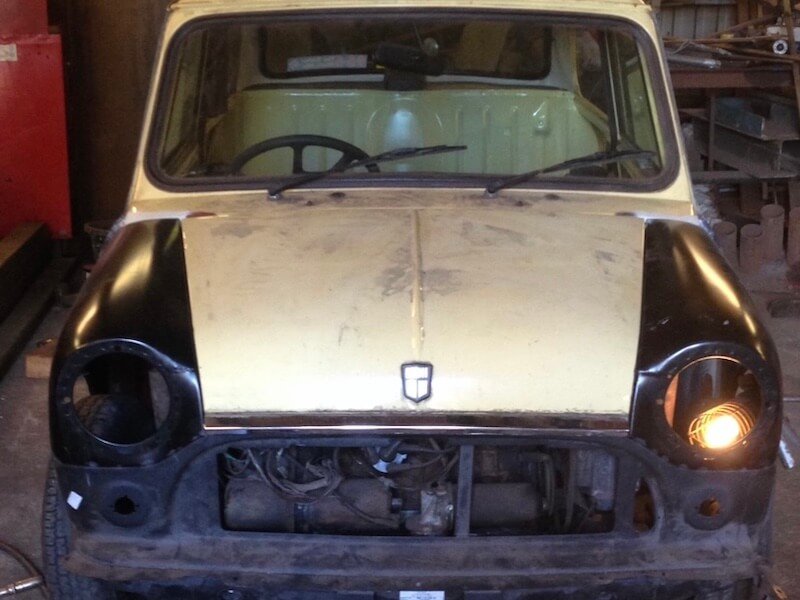 I was buzzing when I passed my test and could finally drive the car. I learnt in a relatively new Peugeot, so it was a completely alien experience jumping from a modern car to the granny velour luxury of Sonny and his temperamental heater switch, but it felt like home. I knew from the moment I set off up the road this is where I’m meant to be.

The 998cc engine isn’t an absolute rocket and I have toyed with the idea of dropping in a 1275 lump in, but I think it would ruin the originality. Sonny is all about the subtle mods, my MK1 Golf will be the car with a few spicy bits! I decided to keep my Mini on ten-inch wheels, which helps on cornering and handling massively. There was no question about what wheel choice I was going for either, it was Mambas, or nothing. The only major changes were the wheels, fitting a three-branch manifold and RC40 exhaust. He’s even still on drum brakes, brave, I know.

Sonny was never going to be an ornament or a trailer queen. I live at the bottom of a valley in West Yorkshire and there have been plenty of times we have been snowed in, but Sonny never fails to get me to work. I know the idea of driving a classic in all weathers will make some people cringe, but I care about my Mayfair a lot and we did everything we could to preserve and protect from rust; the car was rust treated with Jenolite, primed, painted, then Tetra Schuttz used underneath, along with Waxoyl throughout, including the inside of the sills.

When I finished sixth form, my main motivation for getting a job was so that I could afford to run my car and I used him daily for years. I’m now 23, a property manager and training to be a surveyor and valuer. I have been in the sales and lettings industry for 6 years and, of course, Sonny was such a great ice breaker with clients when conducting viewings. I sold many houses through chatting to people about him, sometimes they would forget that we had a house to look at. 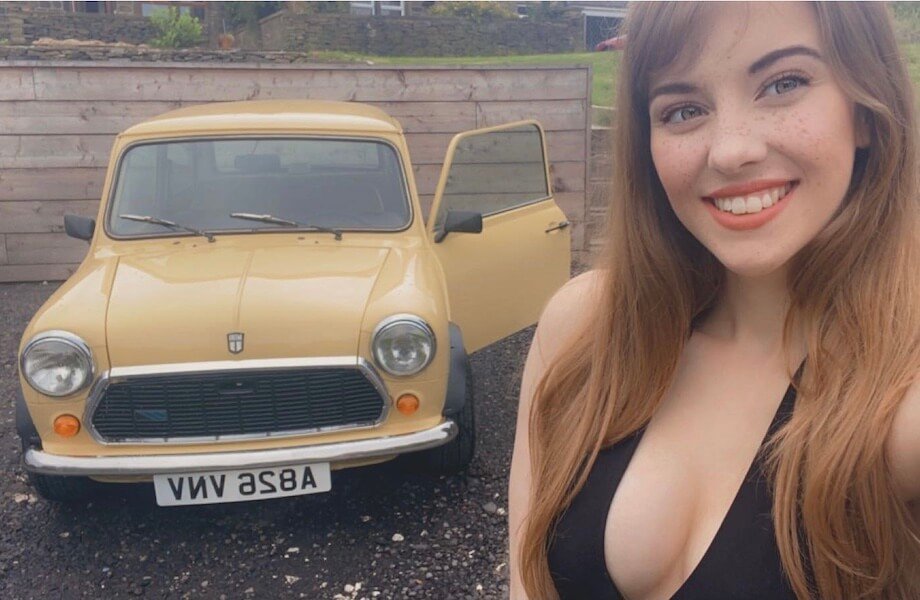 Driving to Bristol for the International Mini Meeting is the most ambitious journey I’ve made so far and he didn’t skip a beat; although driving long distances on the motorway in fourth gear does seem a bit mean. It was lovely to meet people whose cars I had been admiring on ‘the gram’ for so long. 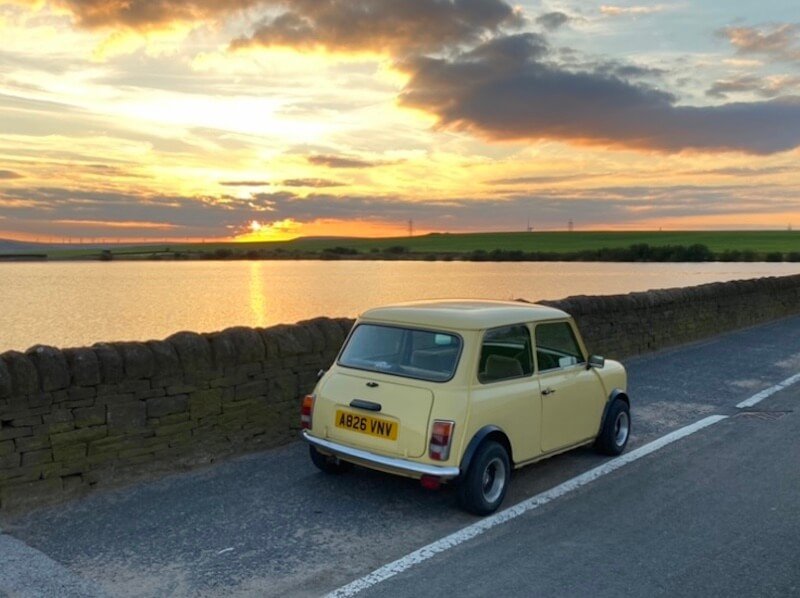 A lot of people I’ve met at car shows have been surprised that Sonny is owned by a lass that knows her stuff. I don’t stand around talking about cars and carbs because I think it looks good, I do it because I enjoy it, even if I am the first to admit if I don’t know something. At the end of the day, no question is silly and asking it will always reward you in the long run. If you don’t ask, you don’t get.

Now that Sonny is ‘finished’ he often features in my modelling shoots, where he is usually the star of the show. Being in front of the camera is a confidence boost, it allows me the freedom to express different sides of my personality and that I don’t wear overalls and steel toe caps 24/7 (although, I did wear my first pair of wellies to bed as a child).

I know that my car makes me feel good about myself because I’m empowered by the graft I’ve put into it. It brings me pride to say ‘I did that’ and I will love that car to no end. It has been a lifeline through all I’ve done and I’ve been at the wheel every step of the way.

My mum has always taught me to be my own person, and as a motorbike rider, she has challenged stereotypes and proved that women can successfully engage in what have historically been deemed ‘men’s’ pursuits in the name of gender equality. It’s interesting to experience how people react to Mum in her motorbike gear, or me in my overalls, compared to when we wear everyday clothes. People can be so quick to judge you by what you do, how you look and what you wear, that’s why I like to put all sides of myself out there. Walking and driving in six-inch heels, that’s a skill, and so is stripping down and rebuilding your first car.

The attention I have had on Instagram has been a bit of a whirlwind. I’ve found it to be a safe and fun environment, however, I know that’s not the case for all car girls. As much as I think there are many posers who sit on the bonnet and claim to know it all, I don’t think the hate, negative comments or messages are called for. People have feelings regardless of if they are real grease monkeys or not. 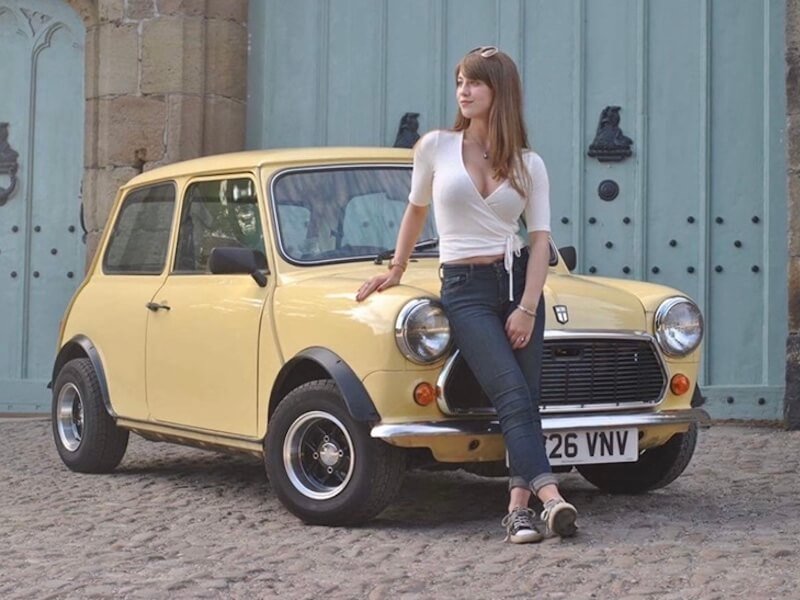 When I’ve received weird or harsh comments in the past, I’ve felt inclined to ‘school’ people in response, but at the end of the day, if you’re happy doing what you’re doing, you shouldn’t care what anybody else thinks. I’m in this for fun, it’s light-hearted and if it makes you feel good, and you love doing it, crack on. Some women are as good as male mechanics, and some choose to do it in high heels.”