FeaturesMe and My Car: Terry Newton and his Ford Focus

Tweaking it to the max in a family hatchback. 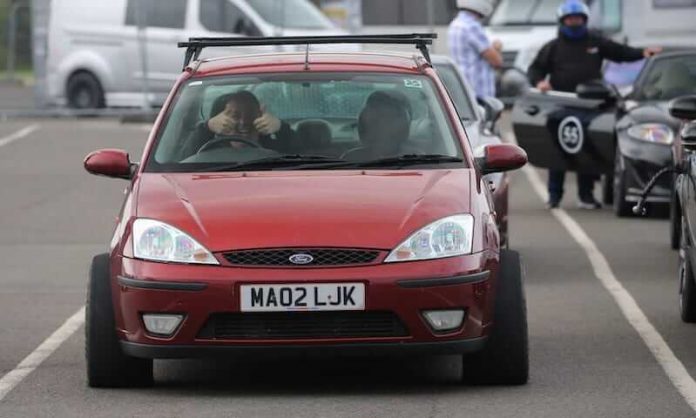 Turn up, and burn up: Terry Newton tells Charlotte Vowden why he chose a mass market, everyday underdog to go drag racing.

Henry Ford built his first experimental car in a workshop behind his home in Detroit in 1896 and over one hundred years later, Brit-born motoring maverick Terry has taken the marque’s most popular family hatchback, the Ford Focus, and given it some welly.

“I wanted the ugliest car I could find, that’s why I got a Burgundy 02 plate Ford Focus with a boot. My little girl Elektra absolutely loves it, she’s four and calls it the ‘bang bang car’, I’ve had people jump to the floor because of the noise that it makes. I’ve never been fast in it with her, I wouldn’t do that, but she loves the launch control; it builds 22lbs of boost. 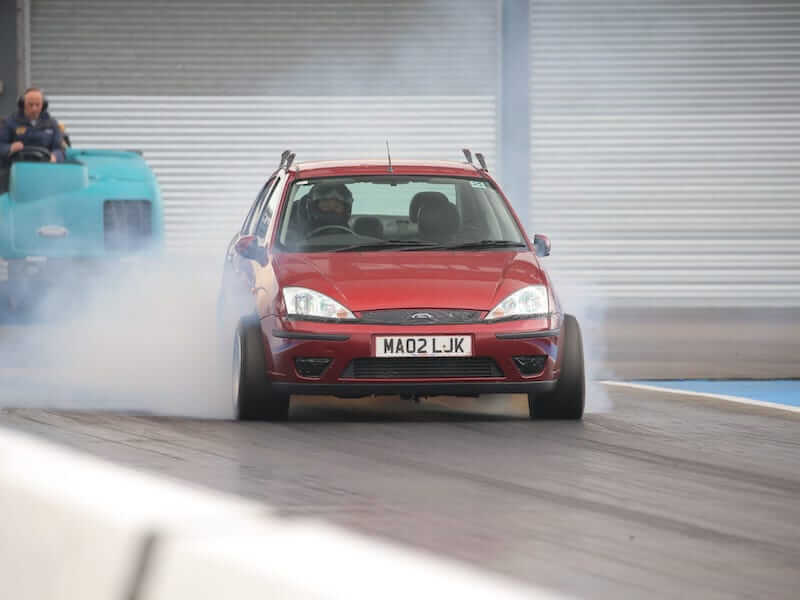 I love an old Ford, I were brought up with them, me dad, me mum, we always had them. You always remember your first car, it’s like your first kiss, and mine was a MK2 Escort that dad gave over fifty quid for when I was ten so I could race it round the field at the back of our house.

He taught me to drive the basic ABCs, which is accelerate, brake and clutch, but within ten minutes of our first lesson I drove it straight into a big post at the side of his garage and smashed the front end up. Part of me lessons was to see how far I could get the car to broadside round a corner on the track he made, but I preferred making a mess of the nice grassy bit of the field. We used to race each other and when I passed him, which I did quite often, I thought I were the best. I think he were proud, and I’m starting to see those proud moments with my little girl because she’s fearless. 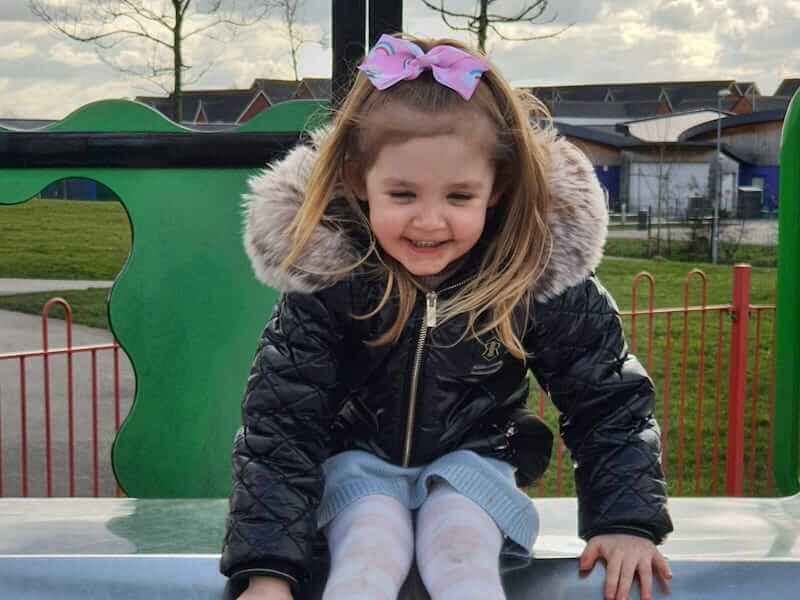 I’ve been messing about on four wheels since I was five, first with karts, then Ministock and now drag racing; I love racing the clock, you’ve always got a target to prove. I’ve got an Escort van that I built for competitions (and for a bit of a joke) which is proven at 750bhp, but I’m aiming to hit 1000. I use all the remnants from that on the Focus; not a lot of money goes into it, just time, it’s a toy to use for a day out.

As standard, its engine put out 115bhp and had a top speed of around 130 mph over two or three miles, but it’s now doing that over the quarter mile at Santa Pod because it runs on a 2.1 Zetec GT30 Turbo, using standard fuel, which makes 480bhp. It’s got a fully forged bottom end, 1000cc injectors, MegaSquirt MS3 ECU and external oil pump. There’s more than enough power, and it could quite easily hit 170-180mph, but despite having flat-foot shifting so we change gears with our accelerator flat to the floor to build boost, the gearing is holding us back. 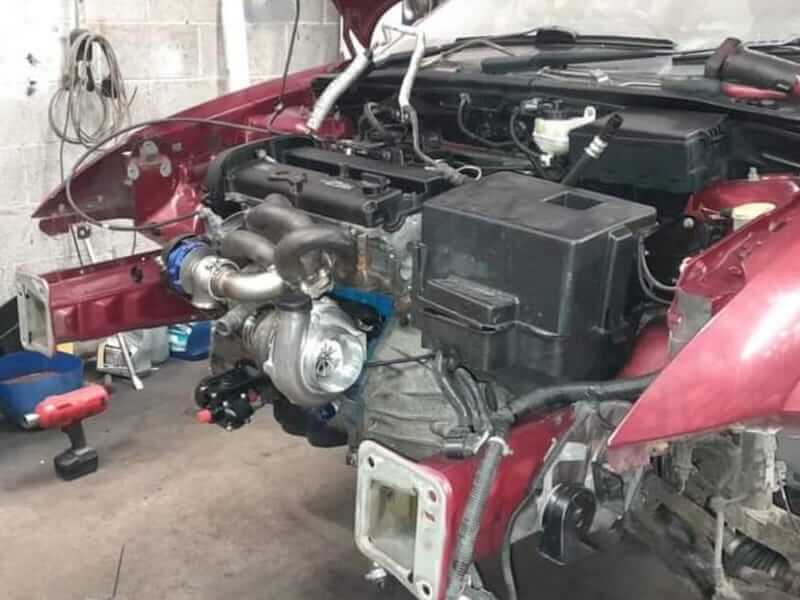 The Ford Focus is a bit of shed, but I wanted people to laugh at it until it sets off. Last year I did a 12.3 on the quarter mile and recently an 11.2, but there’s definitely a ten second in there. There’s a spare wheel and jacks in the boot so I’m going to take those out to lose a bit more weight; it’s all those little differences that will help make that time up.

Me and me team, Chris and Graham, are just a group of lads that want to watch racing and go racing; wherever there’s cars, there’s the three of us. We all have our specific roles, I’m a mechanic and parts fitter, and they are proper engine builders and fabricators. No ifs or buts, I couldn’t do any of this without them.

You can’t be fast unless you’ve blown up a lot of engines because it’s impossible to get it perfect first time. We’ve learnt our biggest lessons from blowing up Zetecs over the years, but I’ve been blowing up engines since 1988, when I were four, and me dad left a Ford Grenada ticking over on’t drive. I got in it, but couldn’t quite reach the pedals, so had to hold on to the steering wheel, stand up on the accelerator to get it flat to the floor and held it there until the engine blew up. Me dad come running out to stop me, but it were too late. 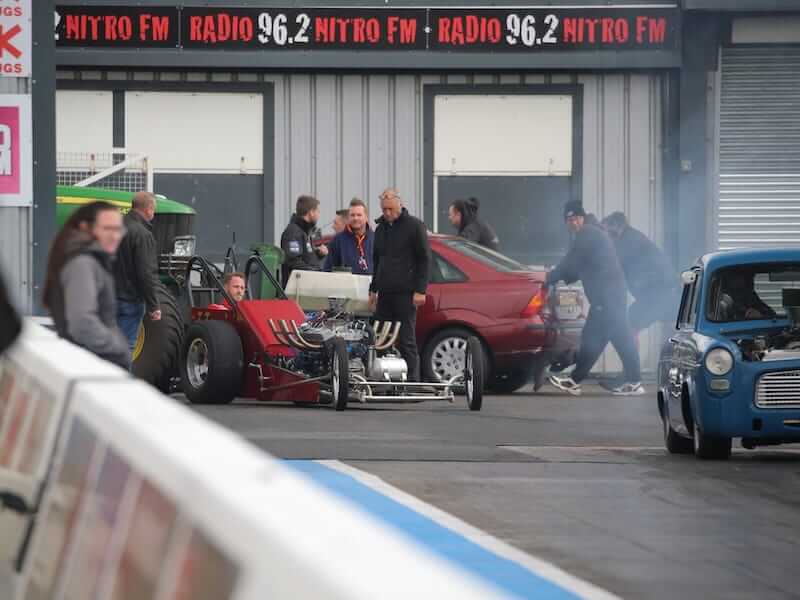 I was sat watching tele with my Mrs, Amy, when I found the Ford Focus on Facebook for £400. I clicked ‘buy it now’ without a second thought because of how ugly it was; you expect nice cars to be fast and I can’t stand that, I like to be the underdog.

I didn’t test drive it, I just looked through the MOT history and saw that it wasn’t rotten. It had only done 80,000 miles, had one owner from new and even had the original dealer registration plates on it from when it came out the Ford factory. It might be a little worn and tired inside but everything is still as it should be; the heated seats and electric windows work, it’s got air-con and although it’s horrible on the road, it’s quite good fun, so it’s got my little girls baby seat in the back.

Sometimes, when I’m going down the straight, I turn on the radio and listen to Nitro FM [Santa Pod’s event radio station], but it doesn’t matter if there’s thousands of people, I don’t see anyone in the grandstands, I haven’t got a clue what’s going on around me other than the marshals telling me to line up. 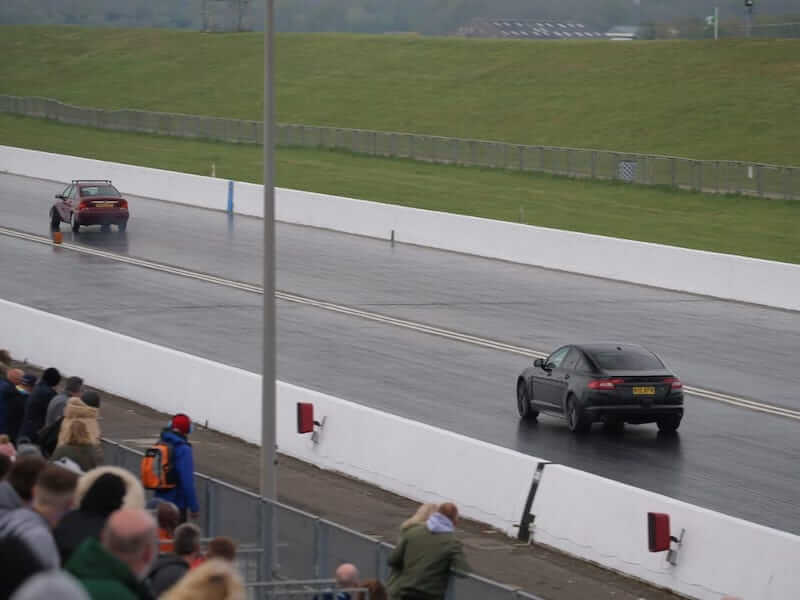 There’s a technique for setting off, especially when you’ve got big wheels like I have on the Focus; they’re 23 inches tall and 9 inches wide. If you rev too much you’ll start wheel spinning and if you let the clutch out too fast you’ll break a driveshaft. The first time gets everyone, you’re nervous because you don’t know the light system, the proper burn out procedure and getting into stage, but more people need to try it because it’s a breeze once you know it! Each lane at Santa Pod is probably the width of a dual carriageway so you’ve got plenty of room for minor errors, you just keep an eye to make sure you’re in the middle of the track, and watch the clock.

Although broken bones are part and parcel of growing up, because I know the damage I did to myself when I were young, Elektra’s not having anything that has an engine in until she’s six. Me dad’s 75, and he’s still a big kid. He was a mechanic and tried to get me to do it early on in me life, but it was only when I was 25 – after partying and doing all the normal jobs in the world – that I went back to him and said I want to open a garage and van sales yard. 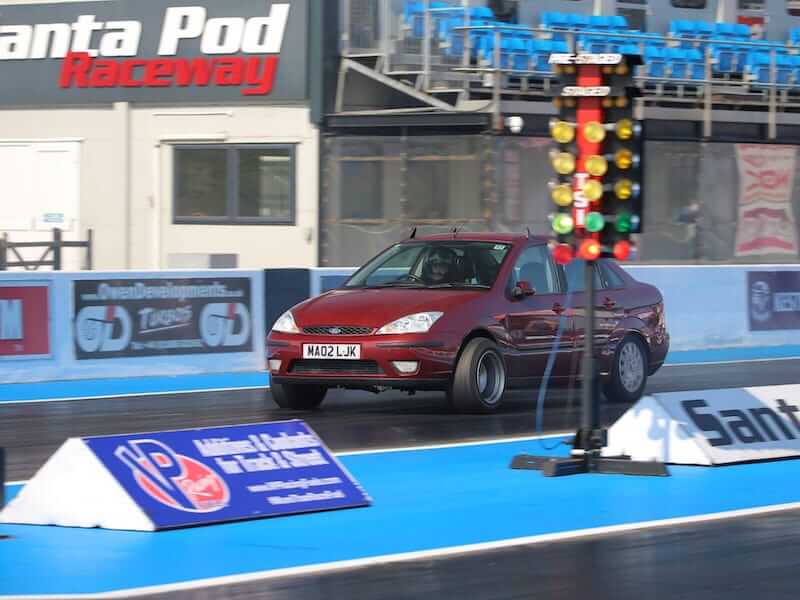 My daughter comes two or three times a week and as much as she’s a girly girl with her mum, when she’s with me, she’s a tomboy. She’ll pick up the dirtiest, oiliest thing she can find and play with it, it’s absolutely excellent to see her getting into it. We all have things that we shouldn’t do, but we all do them. We all have vices and the Ford Focus is one of mine.”

We all enjoy a bit of luxury, don’t we? Car buyers certainly do. The BMW 7 Series not only celebrates its 45th anniversary this...

This week, the LEGO Group announced its latest vintage car set, the iconic LEGO® Chevrolet Camaro Z28. The new set is a detailed recreation of...
- Advertisement -