FeaturesMe and my car: Tom Robinson and his Jaguar XJR 6

Is this the only man in the world bold enough to turn an XJR into a competition car? 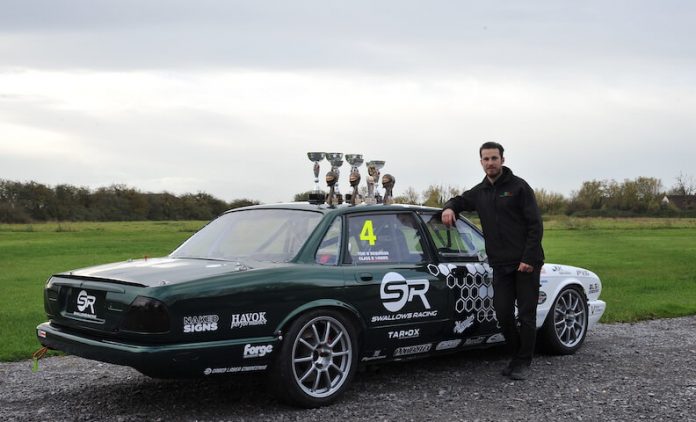 Back from the brink and reincarnated for racing: pioneering engineer Tom Robinson tells Charlotte Vowden why he ignored the naysayers who said a wallowy XRJ 6 would never make it to the front of the pack.

Built in 1995 and saved from the scrap yard several successful racing seasons ago, Tom Robinson’s rare RHD factory manual Jaguar XJR 6 is a saloon car that’s capable of remarkable things. It’s said that history is written by the victors, so read on to find out why this 28-year-old’s story has already earned its place.

“It might be a big saloon, but my XJR 6 is an aggressive car to drive. I trust in it 100% and that’s what allows me to push it to the limit. I bought it as a standard road car, and it wasn’t in good shape, but when people said it would never work as a competition car I saw it as a challenge; their doubt gave me the drive to get it done and I think I’ve proved them wrong. It makes a statement because there’s nothing else out there like it and it shows what’s achievable. I love how my £1000 car has inspired others to move on with their own builds.

Number 4 is one of around 100 manual XJR’s built, so it creates a little bit of friction. A lot of people say ‘I can’t believe you’ve done that to that car’ but it would have been destined for the scrap yard if I hadn’t saved it to go racing, it’s been given a new lease of life and if anything, I’ve extended its life.

I like originality but if a modification or bit of technology makes a classic or rare car more practical and usable I don’t see any issue with it. Modern race cars are designed with components that have been extensively tested and built for that purpose but I race with technology that’s almost 30-years-old so there’s a lot I have to do to make sure it’s safe. I’ve added some contemporary touches, including a performance management system that collects real-time data that I can use to develop the car, but really unique vehicles that have remained untouched are a different story altogether, you’d be ruining a bit of history by changing them. 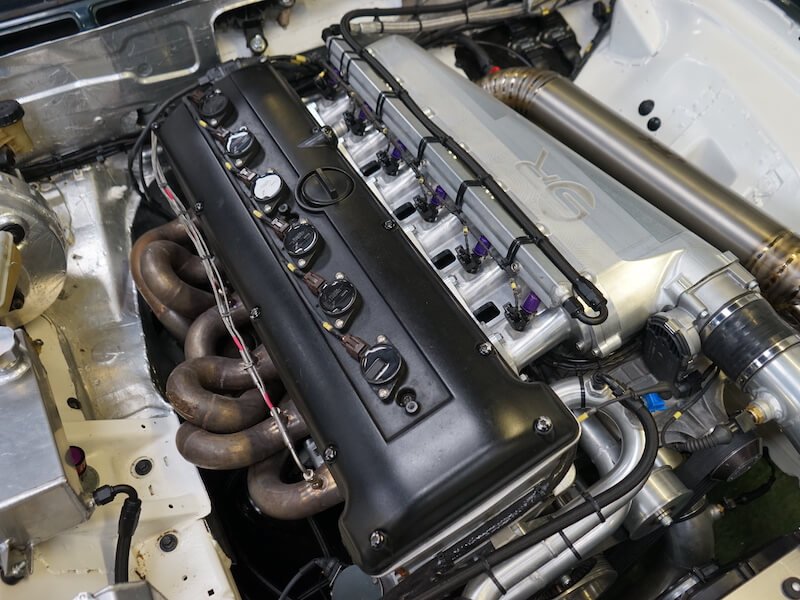 At the beginning of the XJR’s rebuild, I spent lots of time doing things that didn’t require putting lots of money into it. It was a daunting task and looking at the car now I realise how much work was involved, but I just did it in small chunks. It had all the basic MOT failures and although it looked horrendous – it was five different shades of green and every single panel had lacquer peel of some sort on it – but performance wise, the AJ16 engine was still really strong.

The first thing I did was strip the XJR down and throw the cream leather interior trim in the bin – it was absolutely ruined because the previous owner had let his dog live in it. The smell was horrendous; I doubt I’d ever have got rid of it. The biggest challenge was getting the saloon’s two-tonne weight down to 1400kg so that I could run it in the JEC Saloon and GT Championship. I managed it without having to replace any panels with expensive lightweight materials or cutting them out altogether – which would have affected the strength of the car. I took the body right back to bare metal and wanted it to stay its original British Racing Green, but on track it wasn’t very visual so I introduced the white honeycomb effect that bleeds back along its sides from the front. 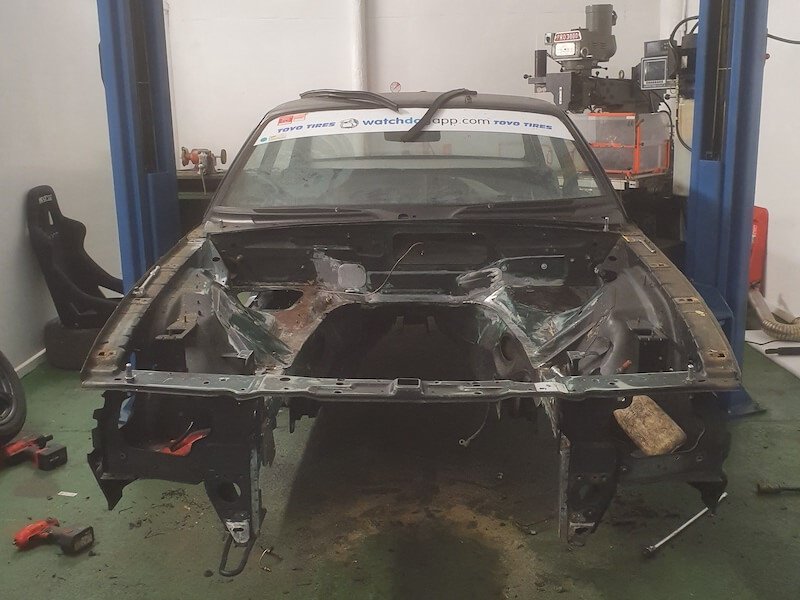 My family have been Jaguar specialists for 37 years, my brothers and I are the third generation, so essentially, I was born into it. My grandad’s retired but he sticks his oar in every five minutes, which I love. We’re based on a farm and we all live on site, so when the kettle’s on he comes round to see what’s happening. He’s only been in the XJR once and he wasn’t keen, but that’s because he doesn’t like being in the passenger seat – it’s a different feeling when you’ve got no control. He raced bikes and my dad raced karts, so motorsport is in my blood. I warn anyone that’s looking to get into it, once you start, everything will revolve around it. My partner says the XJR is ‘the other girlfriend’ because I spend more time with it sometimes than at home. It’s not a case of a few hours here and there, there’s always something I’m working on, or trying to improve. 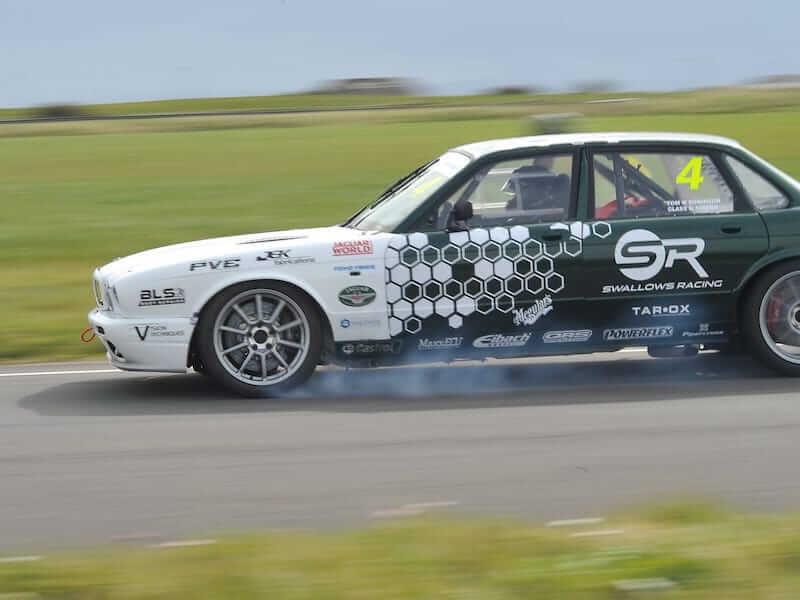 I had planned to do a track day, but threw myself in the deep end at the age of 21; I’m 28 now. My first race took place at Snetterton, and the regulations said the car was only allowed to compete if it was an original factory manual, which it was, but because the straight-six engine had the original N90 E10 supercharger I had to go into class D, which was for the most modified cars. That meant I spent most of my first season mid-pack.

When the regulations changed, I rebuilt the engine and fitted the latest generation TVS-style supercharger, taken from a five-litre F-type, which has got such an unusual noise. It’s not a loud exhaust note, it’s a high pitched, kind of whine and spectators say they can hear it from the other side of the circuit. 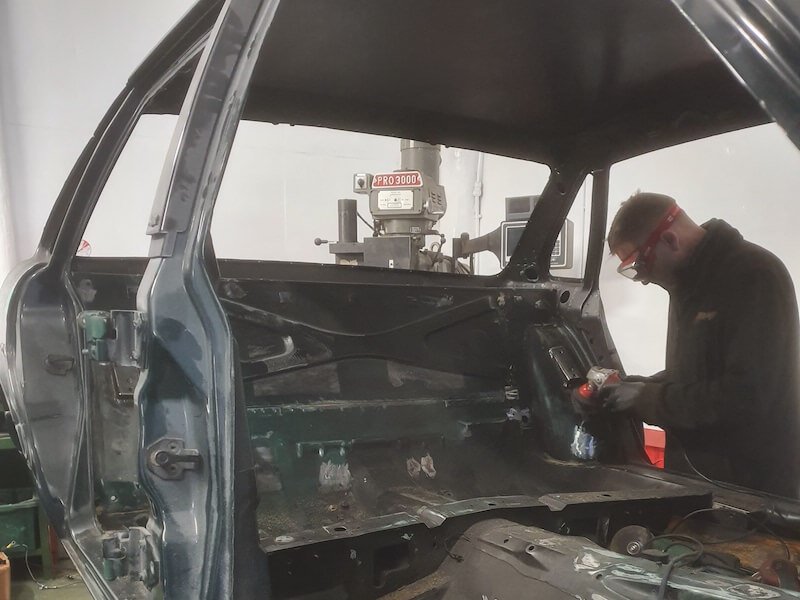 No one else in the world races an XJR – that I know of! – so everything had to be made as a one-off. From an engineering point of view, the biggest achievement was the inlet manifold which I designed with a friend using CAD. It was machined from one big solid lump of billet and it’s a bit of a work of art – it’s almost too nice to be on the car!

There’s no ABS, no traction, no seals and there are speed holes everywhere so it’s a very mechanical and noisy experience inside the XJR. It’s as far away from the original luxury as it could be and although it’s a big car to move I don’t train specifically to pilot it. That being said, the first few rounds of the year after I’ve had a few months off absolutely smash me, that’s when I realise how unfit I am. Most races are 15-20 minutes long, but endurance stuff can last for an hour plus which is hard work. 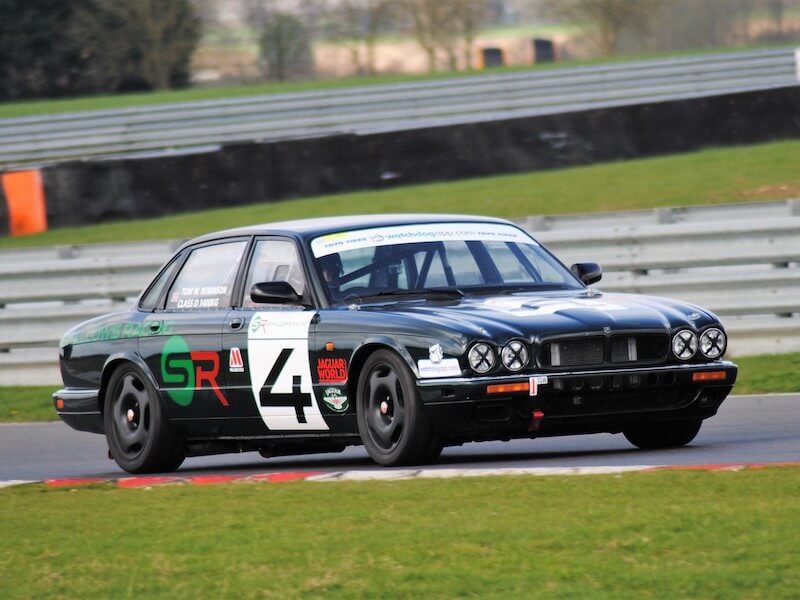 My worst experience took place during the six-hour Birkett Relay at Silverstone. It was bone dry until my stint, which was the last stint of the event. It was November, it was around 3°, the rain was torrential, there were about 80 cars in the race and it was starting to get dark. I had an hour in the car and every 30 seconds someone was trying to overtake me, or I was trying to overtake them, but the windscreen was so steamed up I couldn’t see the end of my bonnet. I didn’t enjoy it one bit.

My best experience also took place in the rain when I beat James Ramm – a man who has won the championship more times than anyone – and I did it by a considerable distance. He’s been dominant for a long time but as racers, we want to be challenged, otherwise it gets boring.

At the end of each meet the XJR comes in, the wheels come off, and everything gets stripped and cleaned. I won’t leave it dirty, I’m quite protective over it on that front, but I’m not afraid to get some panel damage if it makes the difference between coming first or second. I haven’t, touch wood, had any big in the wall incidents, but I’ve been in the gravel trap a few times.

I think the expense puts a lot of people off, it cost around £10,000 to get ready for my first season including entry fees, rebuilding the car and getting my race licence and kit. The biggest saving was the labour because I did it myself, if I added up the hours I’d probably have a heart attack.

I know I’m lucky that I’ve had the support of the family business, and the facilities to do it, but I did start off on a shoestring budget and it’s taken time to get to the stage where I can fund going racing through the results that I’ve achieved; sponsorship helps massively. The value of the car, with all the electronics and if you added up each individual component, is probably around £30-40,000. 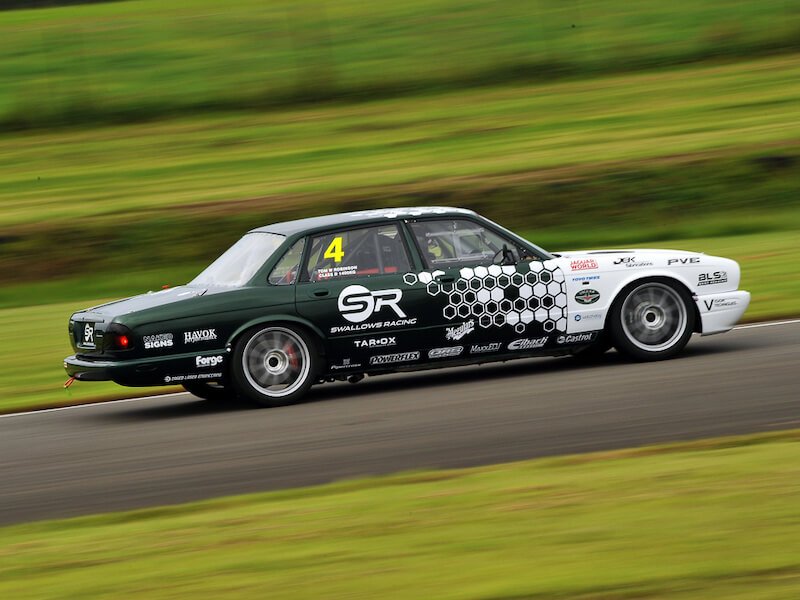 As a member of the Jaguar Enthusiasts Club, I encourage people to come and try out one of our track days in their road car. Giving people that opportunity to find the limitation of their X-Type or XJ safely, in a controlled environment is so important and what surprises most of them is how good their cars are – that’s when I try and tempt them to give racing a go. It’s easy to keep delaying it, the hard part is going for it, especially when you don’t know where to start.

If you don’t already have a car, my advice is to look at what single mark championships are out there – it’s hard to build a car to compete in everything – and find something suitable based on the regulations. It doesn’t matter what you’ve got or what you’re into, whether it’s Jags or Hondas, there will be something you can run your car in. Getting the fundamentals right – like the roll cage, seat and harness – is key, and although I only use mine on the track, it’s got all the bits that would allow me to get an MOT and stick a number plate on it if I wanted to.

Race weekends can be quite stressful; it’s early starts, long days and if the car isn’t doing what you want it to, it’s late nights to get it fixed for the next event. I keep myself to myself in the run up to a race, I get really nervous and that doesn’t seem to go away, but afterwards I’m a completely different person.”