FeaturesMe and my car: Adam Fischer and his 1973 Mk I Jensen-Healey

She’s the one: it was love at first sight when Adam met Ruby 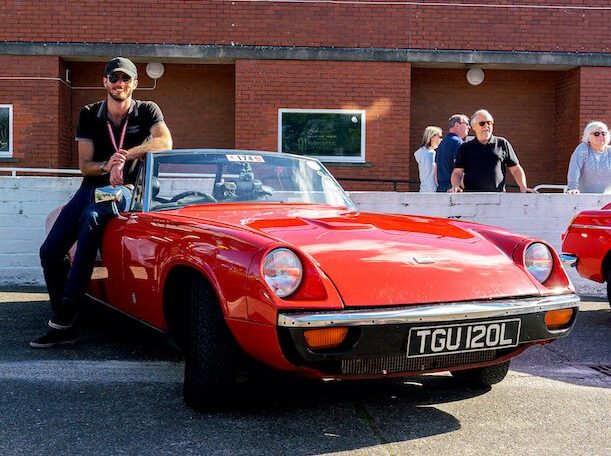 To hit cruise control, or test the rev counter? Adam Fischer thrives on the uncertainty of what might happen during a 20-mile journey in his Jensen-Healey, let alone 2000, but it’s thanks to his dad that he’s got the confidence to run a classic as his first, and only car. He tells Charlotte Vowden what it is about Ruby that made her ‘the one’ and how he’s transformed her into an even more enjoyable ride.

The Lotus-powered two-seater roadster may have only been in production for four years, but 1973 Mk I Jensen-Healey owner Adam Fischer is in it for the long haul. With cruise control installed, he loves to just sit back and relax, but his approach to taking care of his first, and only car, is anything but chilled.

“There’s a bit of green paper that’s been in my wallet since October 2017. It’s just a receipt of sale but it signifies a milestone; the day I bought my Jensen-Healey, a month after my 23rd birthday. Some people thought I was being too ambitious to have a classic as my first car so that little tear off slip from the V5C form reminds me that I’ve achieved something I wanted to do since I was very little. It’s my only car and I have no intention of buying anything else because I have far too much fun in it. 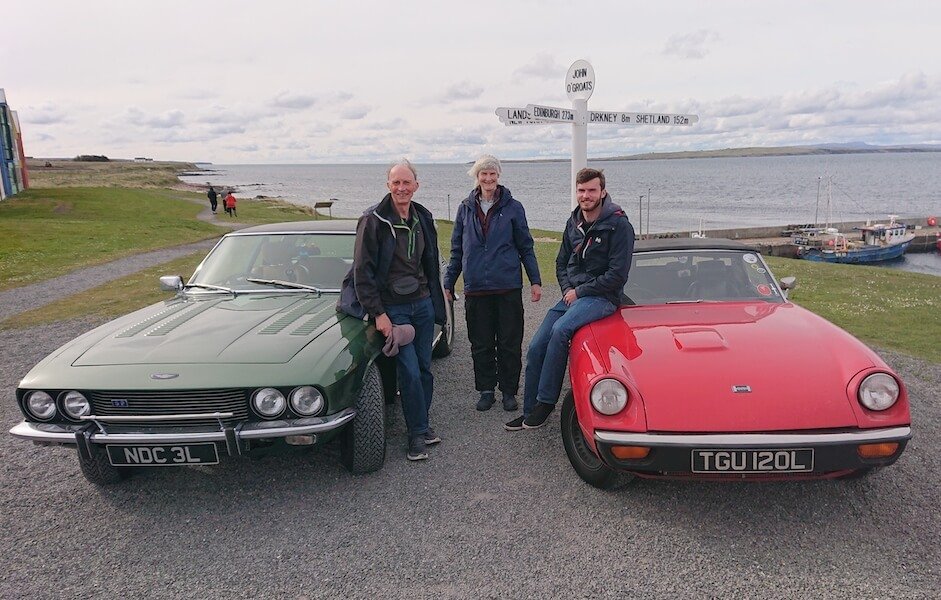 We knew the engine wasn’t performing as it should be, the set up was completely wrong; the ignition was off, the carburettors weren’t synchronised and were full of gunk and it was burning lots, and lots, of oil. I filled up the sump every time I filled up the juice. I did have a moment of uncertainty and wondered if I had made a bad call, but it’s in the nature of these old cars to throw us a curve ball every once in a while. The key word to remember is perseverance.

I had the engine (a Lotus Type 907) rebuilt by a specialist I met through the Jensen Owners’ Club; it went from the factory standard 2.0 litre up to a 2.2. More torque means more horsepower and a bigger smile, but I think if you want more power you should try and keep the engine in period.

When I get that needle on the rev counter above 5000rpm, Ruby makes the best sound, it’s a lovely little rumble, which always grabs people’s attention. I pushed her quite hard on a trip to Switzerland and it was as I made my way up to Grimsel Pass that she reached over 7000rpm for the first time. I posted a video of it on YouTube but that doesn’t show the smoke coming out of her front wheel by the end of the run.

I managed a tonne 25 in her when we were on the Autobahn, and I’m sure she can do more.

There are three significant things I’ve done to transform what was already a good car into an even better car. Number one was to fit a Sunbeam Rapier gearbox which has an overdrive unit slapped in the back. It was completely interchangeable, and just needed some extra wiring. I had to stuff some hose down on the gear box mount to support the extra weight, it’s a bit of a bodge job, but after four years and many miles it still works.

Number two was to install cruise control. Once I get on the motorway it’s brilliant; I press the button, sit back and chill as we blast along. Number three was to fit anti-sway bars – which resulted in a visit to A&E on Boxing Day. 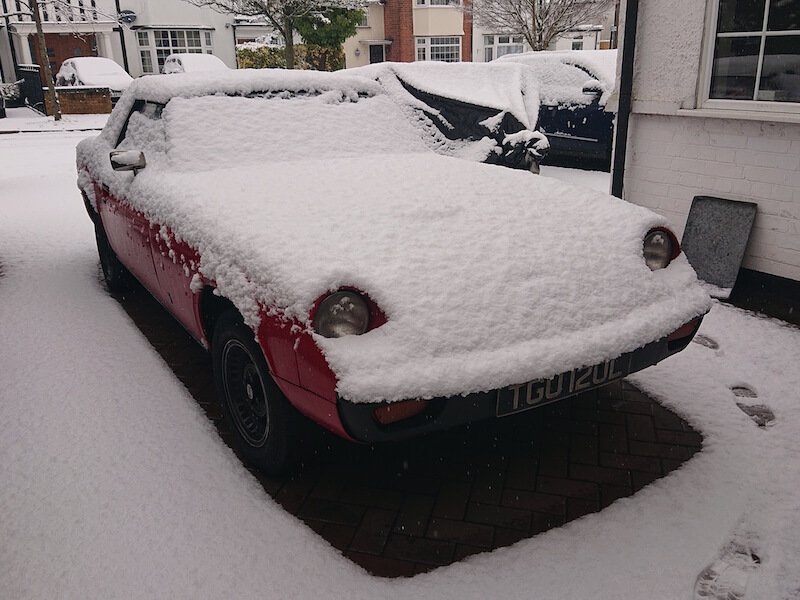 After doing a few hill climbs I wanted a flatter ride through the corners. With minor modifications, the rear went on easily, but the front was tricky. I had to design and make some adaptor plates because the saddle brackets that are meant to bolt directly onto the chassis wouldn’t fit. The accident happened when I was grinding out a plug weld; a bit of swarf came off and went right in my eye, even though I was wearing safety glasses. With Christmas shut down because of Covid-19, what else was there to do on Boxing Day than to work on the car and visit A&E?

I enjoyed lockdown on the basis that I was furloughed for seven months and spent all that time working on the car; it was like a temporary early retirement. I rebuilt the front subframe, welded the floor panel and cross members, fixed the rear valance, serviced the engine and gave Ruby a roll hoop. Classic cars aren’t as safe as modern ones but Ruby also has side impact panels in the doors and a telescopic steering column. Sadly, her structural integrity has been tested a couple of times, mostly involving the front bumper, but the damage hasn’t been too serious. 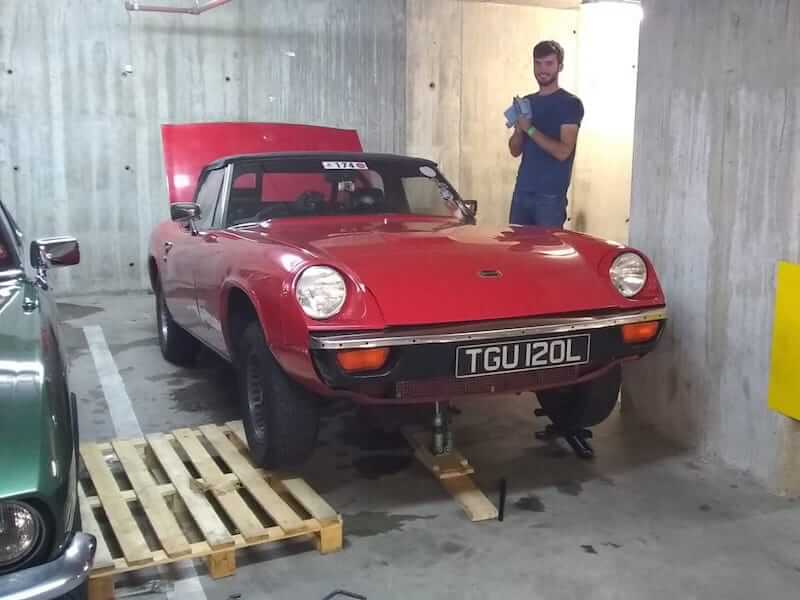 Classic cars have a presence about them, and their owners have a particular mentality. We live in a throwaway society and people don’t take pride in ownership like they used to. Modern cars aren’t designed to be maintained by their user, or their owner, they are designed so it’s easier for them to be taken to a garage and made someone else’s problem – old cars are the complete opposite. They’re simple and accessible; however good or bad it may be in that engine bay you can see everything for what it is. It’s a much more organic experience.

I had a vague understanding of electronics before Ruby, but she’s had some significant problems that I’ve had to diagnose and solve, occasionally on the road, which has been tricky. The cracker was when the electrics failed on the M6, after 20,000 miles of trouble free driving. I was on the way to the Isle of Man Festival of Motoring with a ferry to catch, and although the recovery man was very helpful, I managed to find a temporary fix to the problem – a short in the transmission tunnel caused a fuse to trip – and was able to carry on. 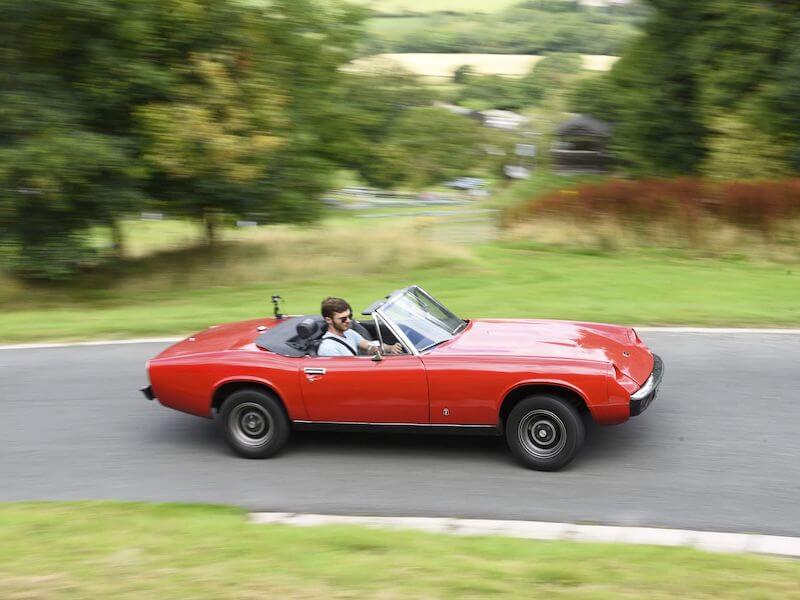 The uncertainty makes it interesting; you never know what’s going to happen in 20 miles, let alone 2000, but over time you become in tune with how your car functions and it’s that bond you make with it, like a well meshing gear box, that makes its quirks enjoyable.

I’ve done over 45,000 miles in Ruby and daily her to work in north-west London. I can manage 20-25mpg when I’m commuting and around 35mpg when I’m doing journeys that are slightly more long haul. There’s a certain overlap with what I do for a living as an engineer and why I like her. I appreciate the manufacturing and know how much effort went into her creation and from an aerodynamic point of view, she’s quite sleek. For a two-seater open top sports car with such a low profile she’s surprisingly practical; she can accommodate a pair of skis and if I remove the passenger there’s room for a workmate!

Being behind the wheel of Ruby is a very happy and natural place. I’ve driven dad’s Jensen Interceptor SP, aka ’the tank’, and although I grew up with it, it’s not the car for me at the moment. There’s so much weight bearing down on those poor little suspension arms it will run over anything and you don’t even feel it, whereas Ruby is a nimble little thing. 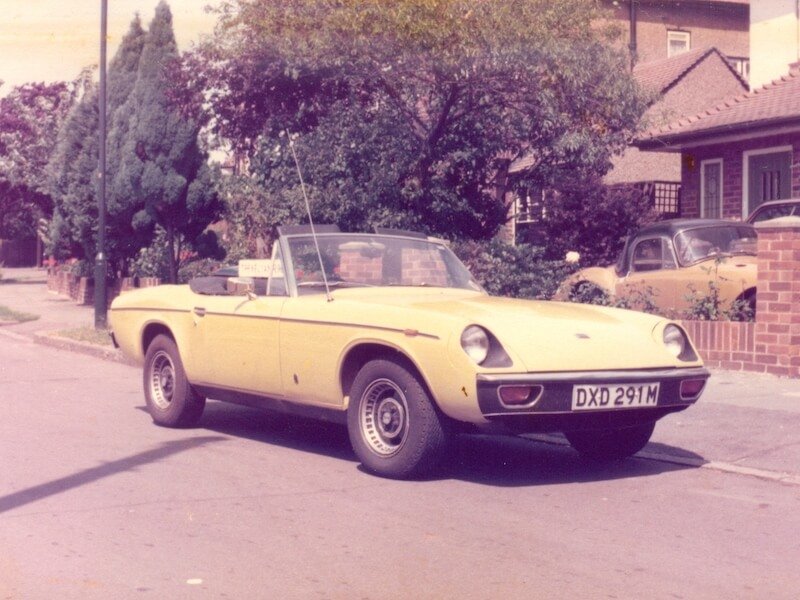 My old man bought his yellow Healey when he was 26, when he and my mum first started dating, and although they stopped using it as much when my older brother got too big to fit behind mum’s seat, it remained part of the family until recently.

Dad’s not the most emotional person, but I think he’s proud to see me following in his footsteps and I’ve got a lot to thank him for. I got quite emotional when we were driving in convoy to Stranraer in Scotland, where he used to work as an electrical engineer. It was a lovely blue sky day, the hood was down, the sea was glistening beside me, the hills were in my rear view and my dad was on the winding road ahead. It was such a cool moment; just a father and son enjoying their Jensens.”