FeaturesMe and my car: Alex Orchin and his Peel P50 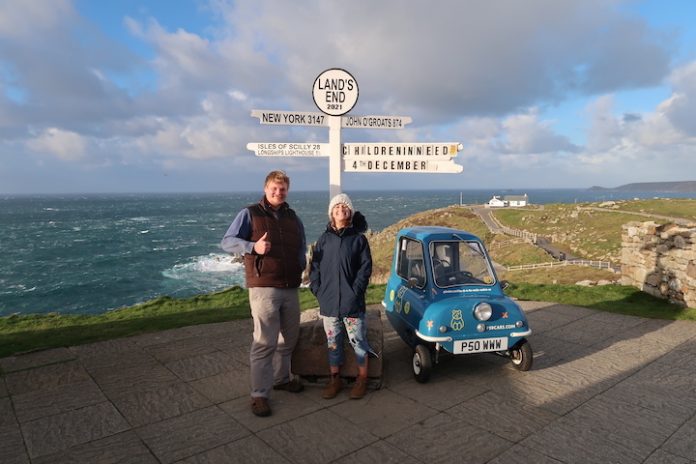 One man and his 23mph three-wheeler: Alex Orchin tells Charlotte Vowden what it was like to travel over a thousand miles in his 54-inch daily driver.

Manufactured on the Isle of Man in the 1960s, the Peel P50 was made famous when Jeremy Clarkson drove one around the BBC offices in a 2007 episode of Top Gear. Three years later it was recognised as “the world’s smallest production car” in the Guinness Book Of World Records, so when 31-year-old owner Alex Orchin set off on an epic endurance test in his own iconic microcar he was bound to hit the headlines and set some records of his own. 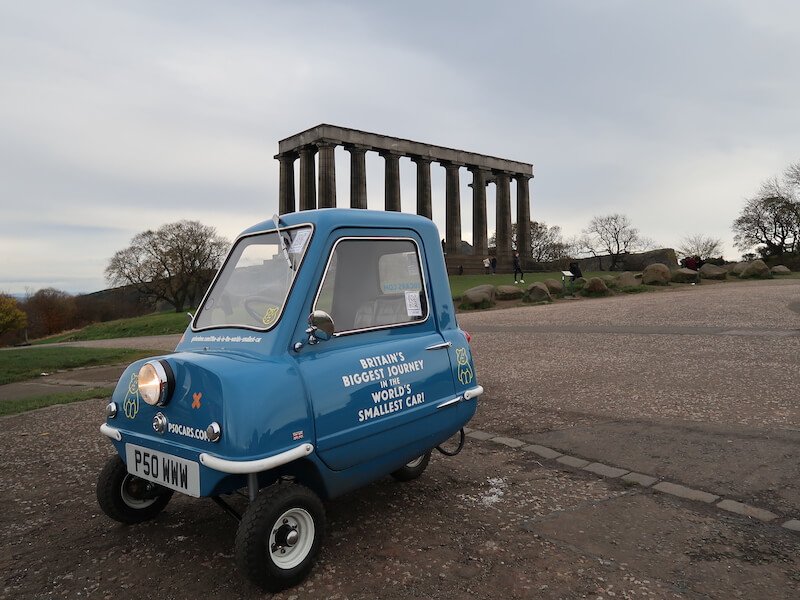 “Motoring challenges are my kind of thing and no one had done John O’Groats to Land’s End in a Peel P50, so the idea of tackling Britain’s biggest journey in the world’s smallest car was impossible to resist. I’ve used mine as a daily for three years, so I’m very proud of what it achieved; in total, we travelled 1488 miles in twenty days, which is almost double the official 874-mile distance. I dread to think how many revolutions its three, five-inch wheels did – even I was in agony by the end of it.

When I set off last November I didn’t know my exact route, I just wanted to head south from Scotland, go with the flow and see what happened. I was driving in aid of Children in Need and the lack of planning made it easier because opportunities to meet people came up so often that I zig zagged all over the country – I only ran out of fuel a handful of times. 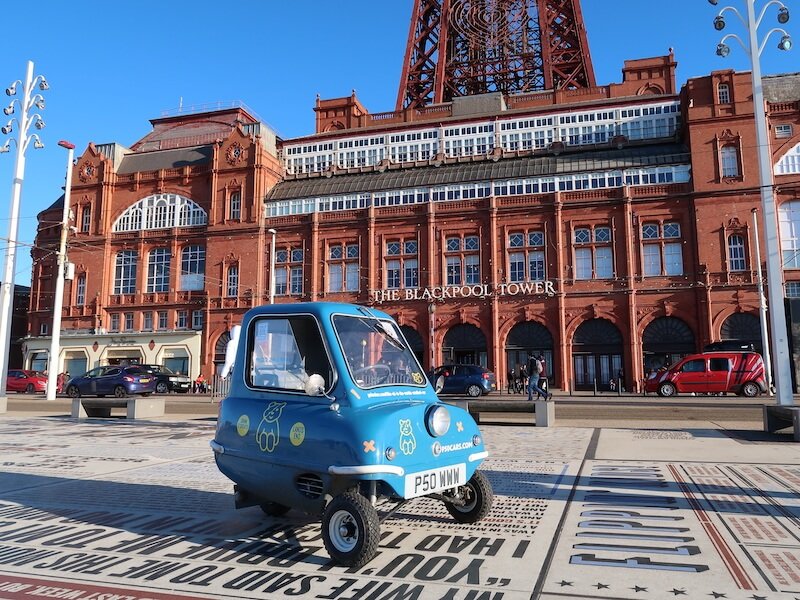 People love seeing the Peel out and about because it’s unusual. I was invited to do a lap of Knockhill Racing Circuit in Fyfe and now hold the official record for completing it in the slowest time to date. I also got to take it to the top of Blackpool Tower in an elevator and drive it across the observation deck before heading to Warwick Castle for a spin through the state rooms.

They were remarkable experiences, and my story was covered worldwide – on television, in newspapers and on the radio – but it was never about getting lots of media coverage; I wanted to do something worthwhile. Within the first two days I exceeded my £2,000 fundraising target, and raised a total of £11,022, as well as a whole lot of smiles. It’s hard to put into words just how much joy a Peel P50 can bring. 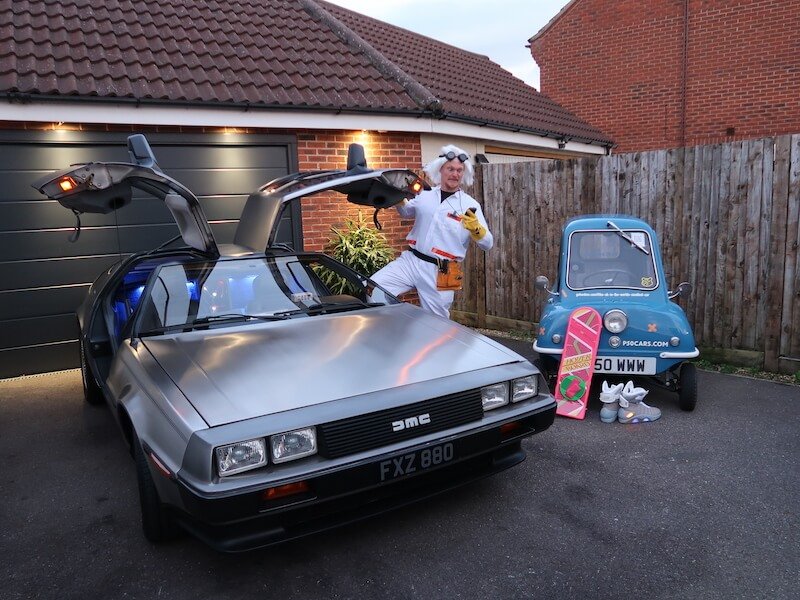 Out of all my vehicles – which includes a ‘68 Morris Minor, ’53 Ford Prefect and ’55 BSA Bantum – the P50 always draws the biggest crowd. Whether they’re toddlers, ten-year-olds or teenagers, kids in particular go absolutely mad when they see it. I often hear “when I’m old enough, that’s going to be my first car”, which I find really inspiring. I’ve worked with young people who’ve come from tough backgrounds a lot over the years, and a couple of schools have contacted me to ask if I’ll do a talk about following dreams and not being scared to try things, which I’m really keen to do.

My Peel P50 is a P50 Cars replica. They use original fibreglass moulds so the dimensions are exact to the sixties model; it’s 54 inches long, 41 inches wide, 47 inches high and has a 5 inch ground clearance. The trick to getting in, is to get your right leg past the steering wheel first and then slide sideways, like a crab. I’m 5 ft 11 so once I’m in, I’m totally scrunched up, and apart from the parcel shelf, there’s not a lot of storage space. When I use it for work I can just about squeeze my laptop and a bag in. 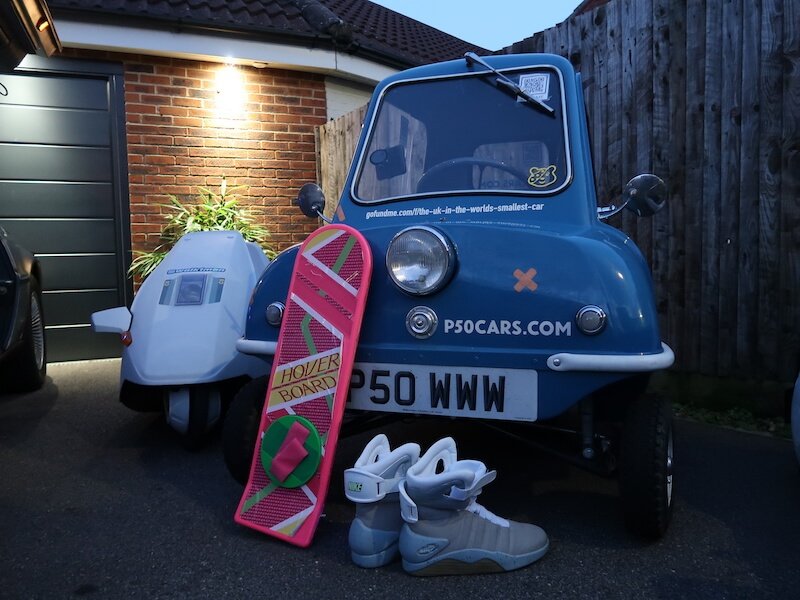 The Peel P50 is powered by a four-stroke, single-cylinder 72cc air-cooled engine so doesn’t overheat (p50cars.com offer the DKW two-stroke engine as a limited-edition spec, and they do a fully electric version too) but I did set the Peel on fire attempting 50mph. I’m not one to think things are scary until after they’ve happened, and this was, on reflection, a bit precarious.

In Scotland a lot of the roads were quite rough and the Peel was averaging 23mph in top gear, which is fourth. At that speed I could do around 100 miles on a full five-litre tank for about £8; there’s not really any other car that can compete with that. In the north of England, the roads were a bit smoother so I put my foot down and got to 30mph, which doesn’t sound like much, but in a Peel P50, 30mph feels pretty damn fast. I managed 35mph, then 40, when the wind was in the right direction, but it was in the West Country that I hit my top speed.

The conditions were just right; the road was quiet and just like marble, so I put my foot flat on the throttle and watched the speedo needle creep up, bit by bit. The tiny wheels must have been spinning like crazy when I got to 50mph – which is unreal for a Peel – and there was a lot of heat coming from the engine bay, because of course, I was burning a lot more fuel. 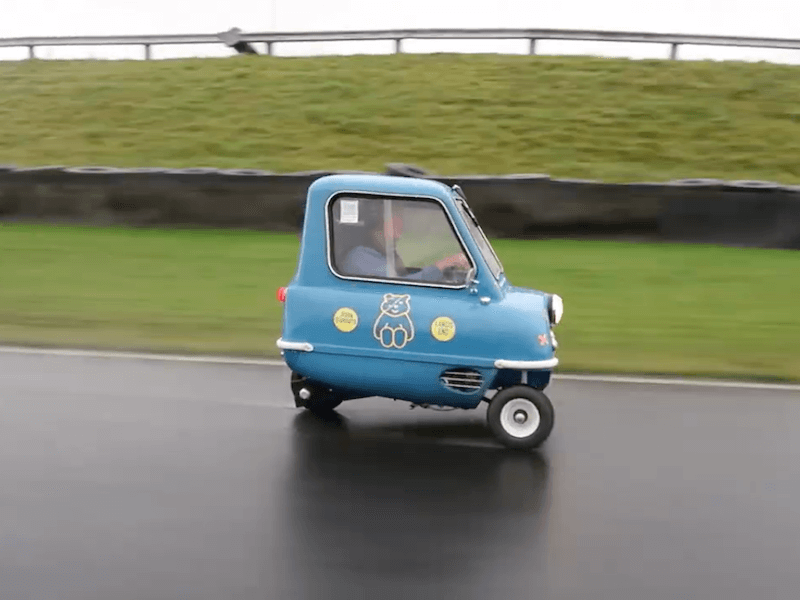 I pulled into a petrol station and as I filled up I started to smell burning plastic. I immediately turned the pump off and tipped the car over – it was smouldering. The heat shield had burnt away and the exhaust pipe was so hot it was melting the bodywork. I wheeled it off the forecourt and poured water all over it.

It’s illegal to drive the Peel on a motorway and I try to avoid dual carriageways, but sometimes on this trip it was the only feasible option. It could be a bit hairy when they went down to a single lane because I’d hold up the traffic for miles. 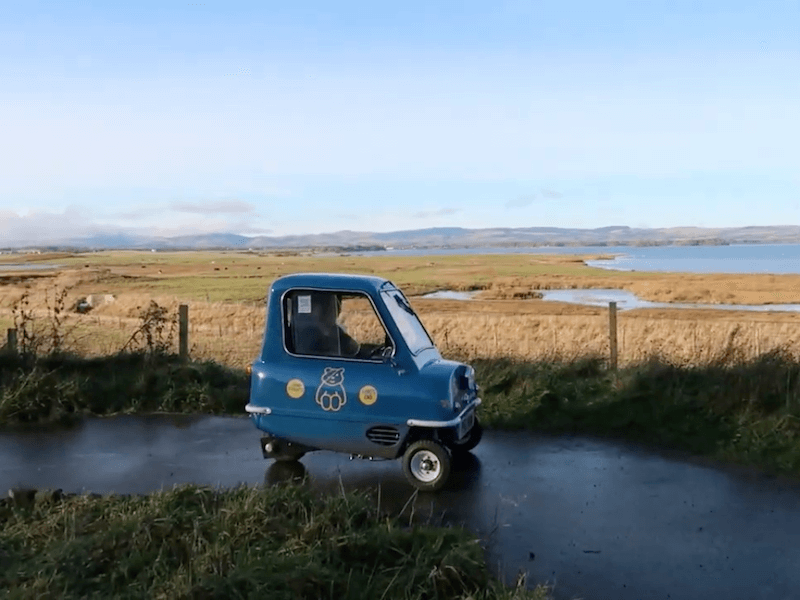 It was much nicer on quiet, country roads. I saw some of the most beautiful landscapes I’ve ever seen in the UK through the windscreen of my tiny little car, especially in the Scottish Highlands and the Lake District. I was just living in the moment and making memories that I hope will stay with me for the rest of my life. They weren’t filmed, they weren’t documented, they’re entirely personal to me.

It was in Manchester that I hit a traffic jam and did something no other driver could do; I got out of the car and pushed it along the pavement. That’s also where a man put his hands on my windscreen and started licking it while I was waiting at a red light; I never knew what oddities each day was going to bring. 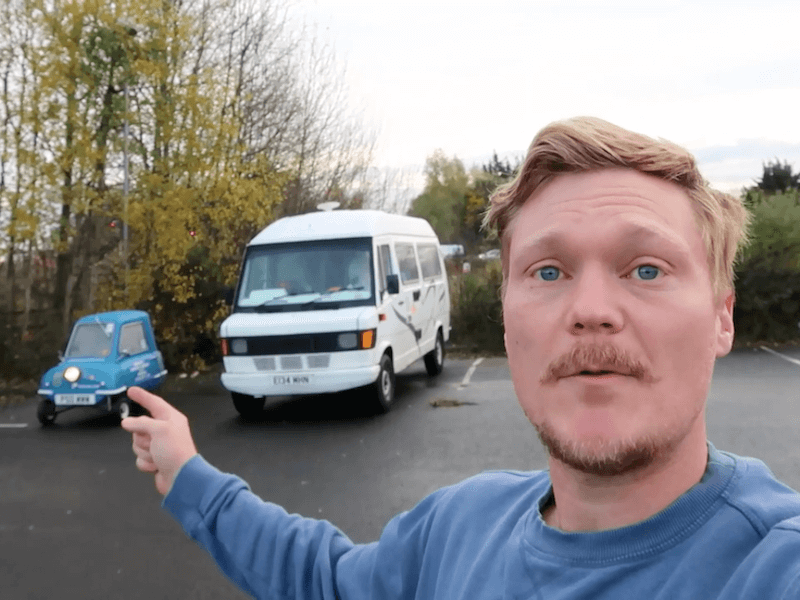 My friend Joely made it all possible because she supported me in her campervan – it was like having my own mobile tea room and hotel. To get the Peel to Scotland we put it in the back by dismantling the beds, and once it came out, it stayed out until Land’s End.

I created the “UK in a Peel P50” YouTube series and uploaded a video every day while I was on the road. The last episode summarises the entire experience, but it give much insight into how extremely uncomfortable, and deafeningly loud, the Peel can be – even with ear defenders that are hooked up to an MP3 on full volume.

I don’t get cold easily, but despite wearing many, many layers, sometimes it got to the stage where I couldn’t even feel the steering wheel. The body isn’t designed to maintain the sort of driving position that it demands, especially for that long, and my knees were the thing that hurt the most – I’m still feeling the effect of tendon damage today.


The Peel had a few recurring issues too, but all of them were manageable. I was barely 300yds from the John O’Groats sign when the clutch cable slipped for the first time, and the chain continuously stretched to breaking point under the strain. I wasn’t there when the tracking was done and because the vehicle is so tiny my body weight really affects it. The camber angle on the wheels is really quite extreme and because I was doing hundreds of miles a day I had to change the tyres multiple times because they kept going bald. The positive that came out of it was that I was able to give a really shy young lad who had been following my journey one of the worn out ones as a souvenir. He was so happy; his dad sent me a message afterwards to say they’ve turned it into a clock with a picture of the Peel in the middle. 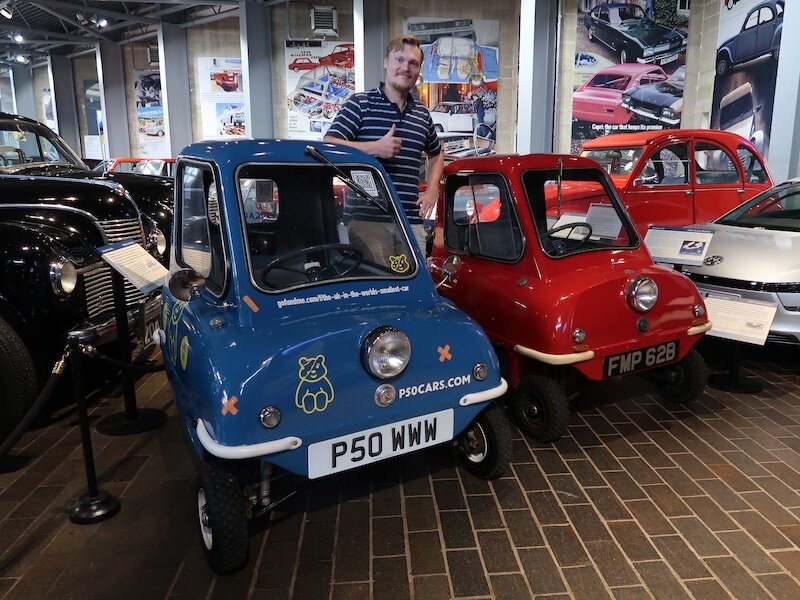 It took nearly three weeks to do this challenge because it was never about the destination, it was about having time for the people that I met along the way. Just as I was about to leave Knockhill, a car turned up. The passenger, a severely physically disabled young man, wanted to see the car, and although he didn’t have any way of communicating with me, the ladies that were with him said how much it had meant. 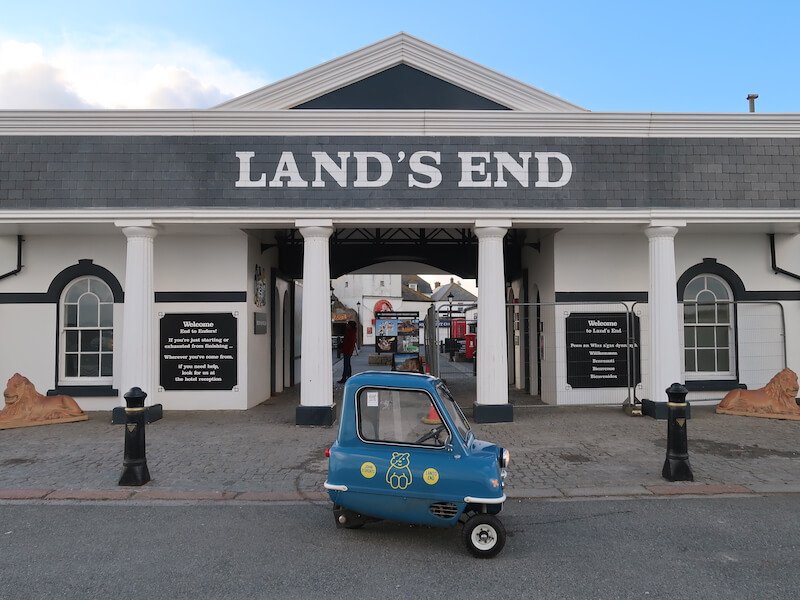 I reached Land’s End on the 13th of December and was absolutely exhausted. We went to the famous First & Last Inn for a proper pub dinner and as soon as I parked up, the P50’s engine died. I think it was its way of saying: ‘right, that’s it’. A week afterwards I got what’s known as the post trail blues so started plotting some crazy ideas for future adventures. I’m converting a 1955 Renault Goélette into a full-time living van with a tow bar so I can pull the Peel on a little trailer which means I’ll be self-sufficient. This trip was not about the destination, but the journey, the experience, the adventure, of most of all, the people we met.”

Keep your pets safe in the car