FeaturesMe and My Car: Amy Ellicott and her VW Scirocco

Check the V5C, this Rocco belongs to me! 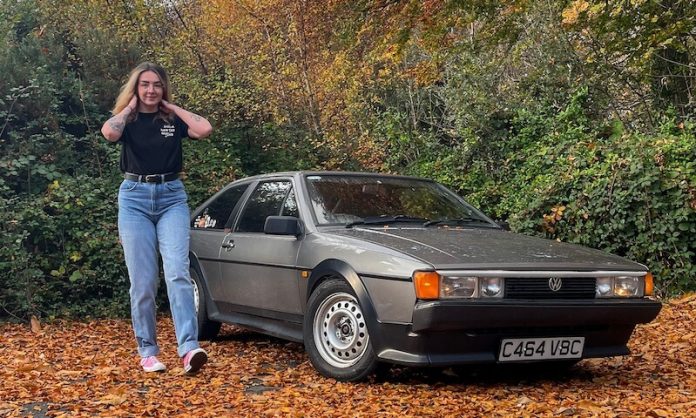 VW Scirocco owner Amy Ellicott tells Charlotte Vowden why she doesn’t mind it when people mistake her eighties Rocco for a DeLorean, but she does take issue when they assume it’s not her name in the log book.

Designed by Giorgio Giugiaro, who was also responsible for the Volkswagen Golf, the stocky 2+2-seater VW Scirocco coupé first went on-sale in 1974, and although the second-gen car may not have sold as many units, Amy Ellicott thinks her retrofitted Mk2 wedge has got the edge. 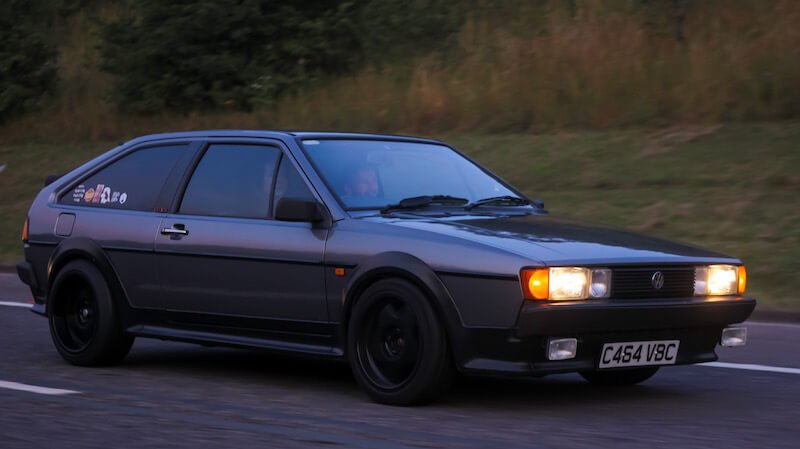 “I like the fact that people don’t expect me to be the owner of a Scirocco. It was two and a half years ago that I decided I needed to scratch that eighties Volkswagen itch so I went looking for one that was ready to drive and found my 1986 Mk2 Rocco thirty miles from where I live. It was fate and I fell in love the moment I saw it. I paid £4,750 to be keeper number six on the V5C. 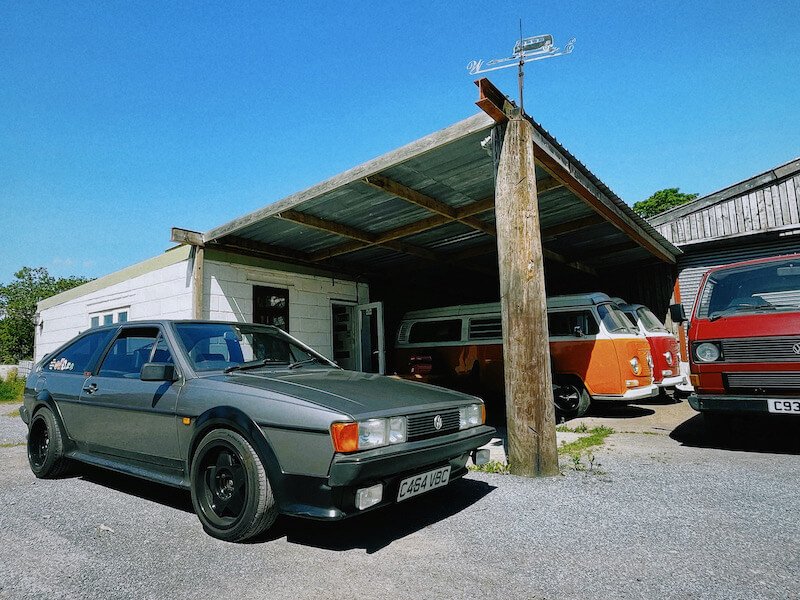 With around 70,000 miles on the clock it had been dry stored and very well looked after, I couldn’t have asked for a better example, but it’s a little bit of a Frankenstein. The original 1.6 petrol was swapped for a two-litre 16 valve ABF engine from a Mk3 Golf GTI which took it from around 60 brake [horsepower] to about 150. The Rocco only weighs about 885kgs so it can really shift and you can feel all the bumps in the road. It has been retrofitted with power steering but it’s still pretty heavy, which means you feel the car when you drive the car, I would have been disappointed if it was super light and easy to move. 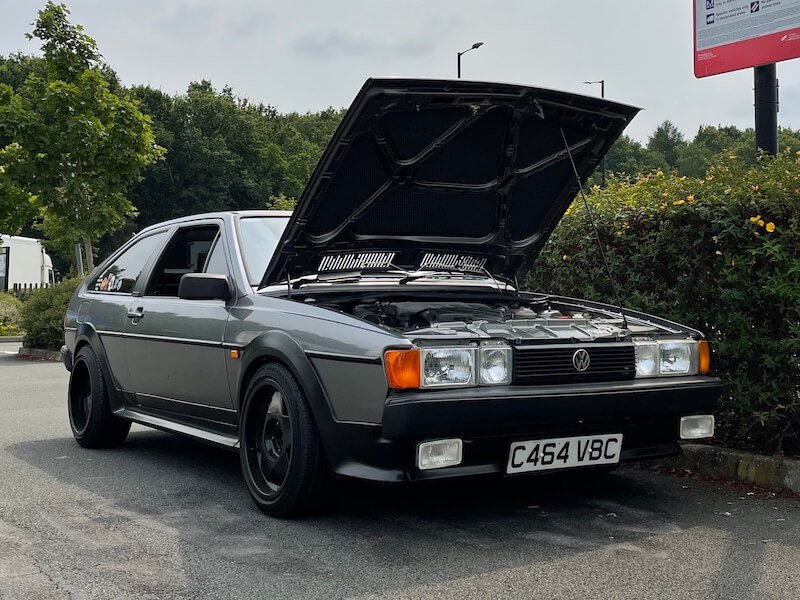 When I first opened the driver’s door I thought phwoar, someone has spent time crafting this interior. The way everything is laid out is to optimise the driver’s experience, for example the centre console is tilted towards me, rather than the passenger. Greg, my boyfriend and fellow VW nerd, stepped up to the mark when I went to view it because I was too scared to test drive it in front of the owner so he did it instead. I trust him to drive it, but that’s not to say I don’t keep one eye on him and one eye on the road! 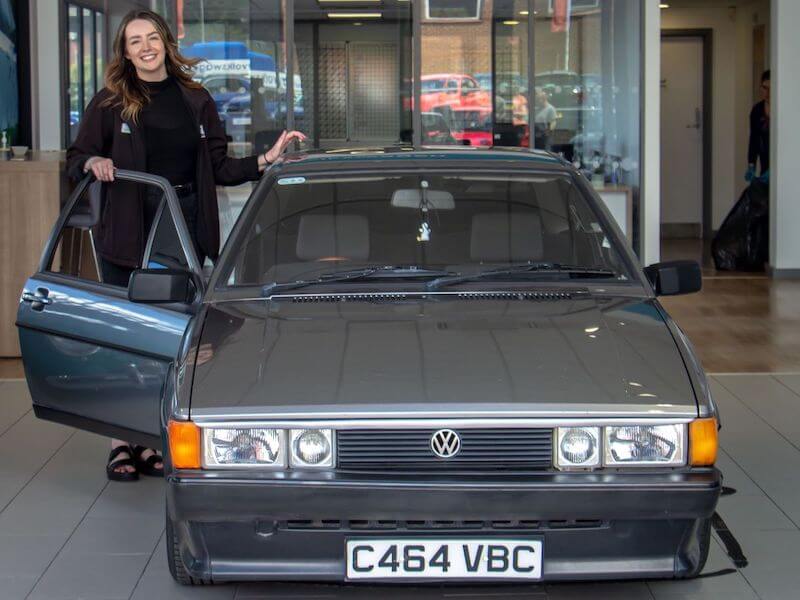 It does grate when people assume it’s Greg’s or my dad’s car, it feels patronising. I do try to ignore it but I think those kinds of assumptions are slowly killing the scene because it’s a big hurdle to overcome. The worst I’ve had was when I took the Rocco to a McDonalds Drive Thru and the guy serving ducked right down, ignored me, looked Greg in the eye and said ‘I like your car mate.’ I was the one driving! It really put me off my milkshake.

I’ve also heard people say to Greg ‘I wouldn’t let her under there’ when we’ve been working on the car. It’s frustrating, but I became numb to those sort of comments after spending three years as a fitter changing batteries, bulbs and wiper blades at a Halfords store. It’s when people smile and enjoy seeing the Rocco that makes it worthwhile, those reactions are my favourite thing about ownership. I think cars like mine should be appreciated. I love the Rocco’s wedge shape and angles, particularly those big square headlights, but it’s also the best and most reliable daily drive I’ve ever had. The only issue I’ve had was last winter when the coil pack needed replacing after it got engulfed in water. Other than that it powers through. 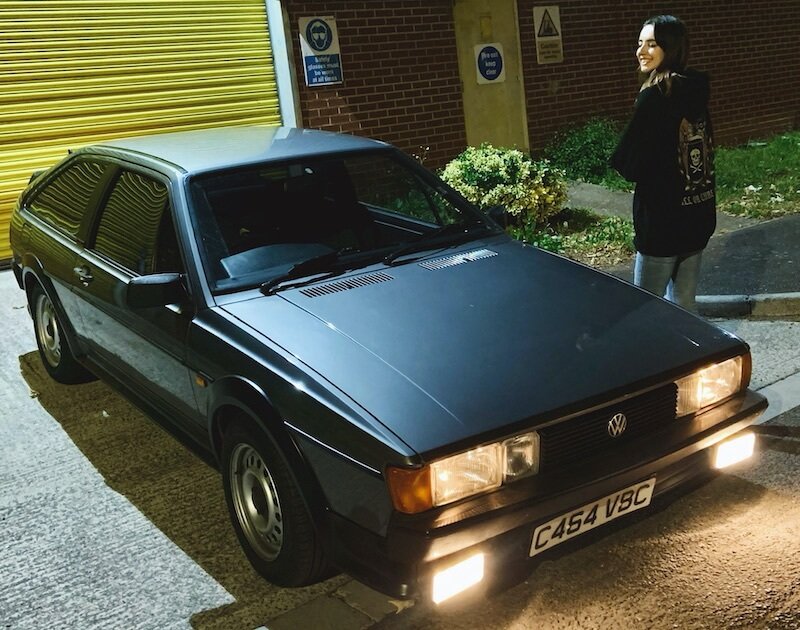 The arch gap was huge when the Rocco was at its original height and it handled like a boat, which led to a few sketchy moments. I used coilovers to lower it and it’s made a hell of a difference, it was definitely the right decision. I ran it on massive black Borbet A wheels for a little while but realised soon enough that they were too big because they rubbed quite a bit of my arch liners away; the originals quickly went back on.

I am a fan of OEM and considering the car is 36-years-old the interior is pretty much immaculate. The slightly bucketed seats are upholstered in a blue, red and white tartan cloth and the only imperfection is a tiny rip on the driver’s seat. The white headlining is also intact. It’s very cosy in there, I’ve tried to fit people in the back but without any success, and no matter how many air fresheners you put in a car like the Rocco, you will never get rid of its smell, and that’s a good thing, but only people that like classic cars will understand what I mean.

The original cassette deck, which I’ve still got, has been replaced with a bluetooth retro look radio but I think I’ll put it back because I’d like to see it as it should be. I’ve done a music video for a band called Kaizens [who have since split up] with the VW Scirocco, which was really good fun. I had to drive through Dartmoor wearing a mask whilst pretending to kidnap the lead singer, the car suited the role perfectly because I think it does look like a bit of a villain’s ride.

When I joined Volkswagen as a sales administrator, I think the Scirocco helped me get taken seriously because it showed them I know something about the brand. A colleague and I now organise car meets at the dealership where we work, which is open to VWs of any age, and each time we select a few to go on display in the showroom. We do have a parts department that caters to eighties and nineties cars and because I’ve got the Mk3 engine stock is readily available, but body parts for the Rocco are like gold dust.

Greg was really good friends with my dad before we got together, they were car buddies, and like my parents, who met because they both owned a VW Beetle, Greg and I have built our relationship from a mutual love of cars. We’ve just got our first house, with a garage, because it’s important that the Rocco continues to be dry stored. I like the responsibility that comes with preserving a car from a different era, and maintaining old cars together is our hobby, we love to take bits apart and put them back together again. 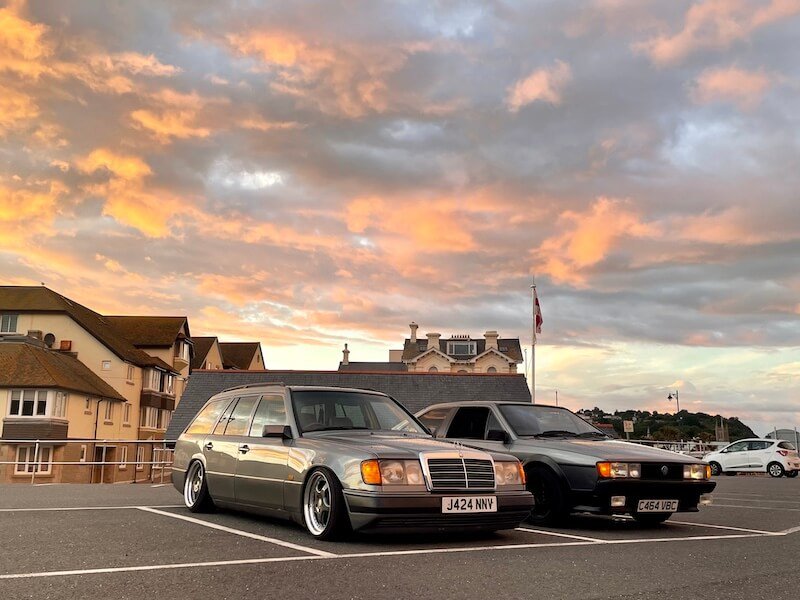 The Scirocco is a basic spec car, I’ve got the original purchase invoice to prove it, but with the big trims on the wheel arches (which are prone to hiding rust) and spoiler on the back window, it’s got a bold look that some Roccos don’t have. I fitted the eyebrow spoiler because I love the Euro look, it’s a bit mean, almost as though it’s frowning. I see the boxiness of cars like the Audi quattro in the Rocco but the most common thing people mistake it for is a DeLorean. I’ve had a few kids shout ‘it’s the Back to the Future car’.

You don’t have to know everything about older cars to own one, there is so much help out there, especially online. To anyone considering ownership, go for it. I’m beaming when I drive my Rocco, I love her quirkiness, I feel like it suits me, so she’s definitely a keeper.”