FeaturesMe and my car: Best of British Car Show special

Me and my car: Best of British Car Show special

Celebrating the British automotive industry’s most quirky and charismatic heroes. 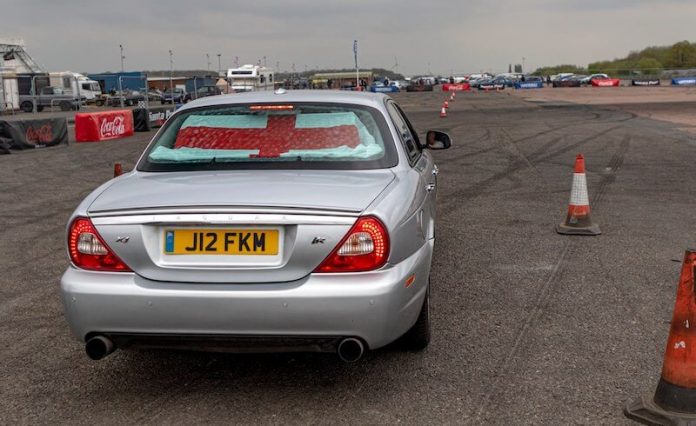 Held on St George’s Day, this debut event paid tribute to Britain’s most magnificent (and mundane) man-made machines. From steam engines to a Mini with 800lb of thrust, Charlotte Vowden shares her highlights of Santa Pod’s inaugural Best of British Car Show and talks to the owners of two of the most iconic cars in attendance.

The Best of British Car show; a one-off event to mark The Queen’s Platinum Jubilee year? Nope. Launched on St George’s Day, this splendidly eccentric addition to Santa Pod’s annual event calendar was a celebration of the country’s automotive accomplishments. I saw a man stand on the roof of his Jaguar while it span donuts beneath him, an MG being thrown about a handling track by a member of the public and warmed my hands in the wake of a Jet Powered Mini – all within safe and controlled environments, I should add. 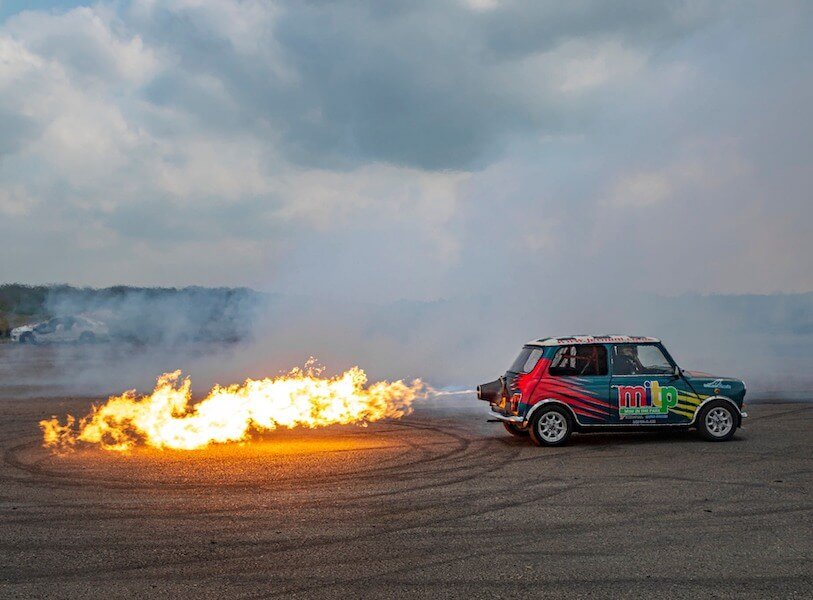 The event’s start-line queue invited amateurs as well as professionals to test out their top speed on the quarter-mile course, and while some made the grandstands vibrate more than others, the unlikely bunch, which included TVR’s, a Lotus and the world’s fastest shed, provided top spectator entertainment. Trackside, I was treated to the cacophony of a classic Norton motorcycle being warmed up, and met the custodians and caretakers of vehicles ranging from a three-tonne 1936 Scammell truck to a Triumph and a steam engine. These two gentleman and their cars, were my stars of the show… 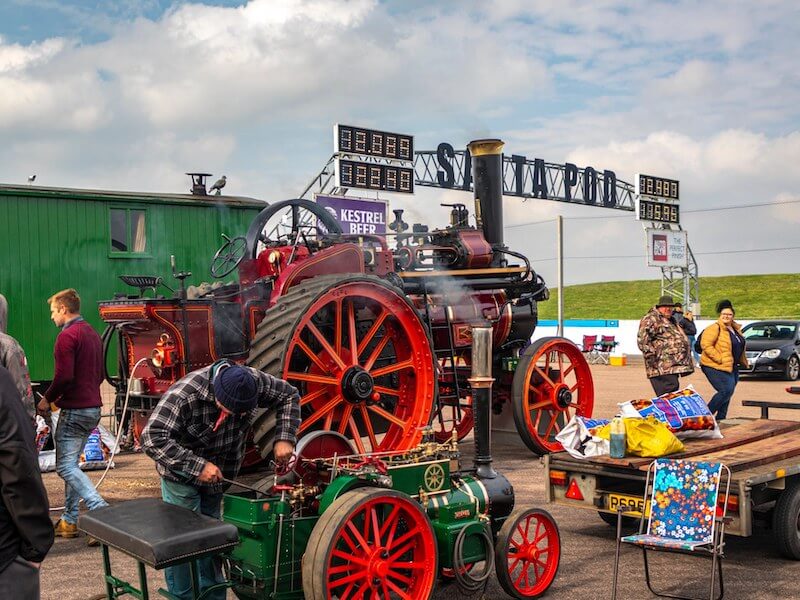 Rod Martin and his C-Type

Designed under the company’s autocratic founder William Lyons, whose headmaster told him he would “never get anywhere messing about with engines”, the C-Type marked a revolution in racing design that helped Jaguar to dominate Le Mans in the fifties. When he’s not fizzing along British B roads in his ’72 replica, Rod and his beloved blue sports car can be found seeking high-octane thrills on historic circuits – including Le Mans – as well as raising money for good causes. 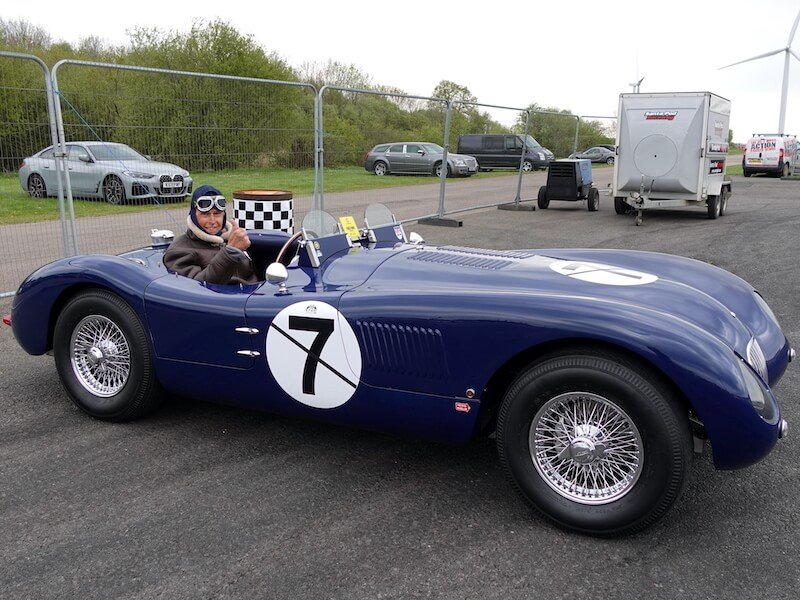 “I’ve just turned 70-years-old but I’m still young and stupid at heart. Ask me wife and she’ll tell you I’m always in the garage – eureka moments come to me at four in the morning sometimes. I wake up and think I can make something on the car better so I go down in my dressing gown, draw the idea, and make it the next day – if I go back to sleep I’ll forget. I’ve spent so much time trying to get everything right on this car I’m so confident I can just get in it and go anywhere – I suppose I’ll break down on the way home now I’ve said that.

I’m an engineer and ran my own business renovating MG sports cars for thirty odd years, so I’ve been round the clock a bit. I did my apprenticeship at 16, and started off building bikes  – I went to the pictures five times to see the Easy Rider film – and progressed from there.

I’ve got a Triumph Bonneville T120, but dragged raced a Suzuki at Santa Pod – I got to 150mph in 9.2 seconds. Everybody thought I’d kill myself doing that but 17 years ago I was welding in my garage and had a big explosion. I was two and a half months in Selly Oak Hospital, nearly lost a leg, nearly died in fact, so I’ve got the second bite of the cherry now and I’m enjoying every minute of it; we’ve come out good. I try to do me best, so do voluntary work for the Air Ambulance, they saved me life, I did a run for them all around Scotland and raised just over £3,000. I also raise money for Sailability, a sailing club for disabled kiddies and adults.

I don’t take the car out in the rain, but if I’m on the way somewhere and the weather turns I don’t worry. I went to Spa in Belgium with a friend to drive round the circuit, we did 800 miles in four days, in drizzly rain – everyone was papping their hooters saying good for you! We had our helmets on, but as were were flying past all the lorries on the Autobahn they sprayed water all over us. We didn’t get that mucky, and I had to give the car a bit of a clean off, but we all came up right up again.

I like looking over the bonnet at the front of the car the best because it’s minimalistic and has a nice curvature. It took a lot of painstaking work and three days polishing the wheels, but I won Best in Show today, which I’m proud of. This recreation is a little bit short for me, they actually make the body two inches bigger now, much more suitable for the longer person. I put a cushion on the passenger seat when my wife sits in there so she can see out.”

Martin Purchase and his Mini Sprite

From its conception in 1959 until the production line ground to a halt at Longbridge in October 2000, 5,387,862 Minis were produced, making it the most successful all-British car ever made. With a lasting enthusiasm for the marque, Martin has transformed his dinky driver into an icon in its own right. 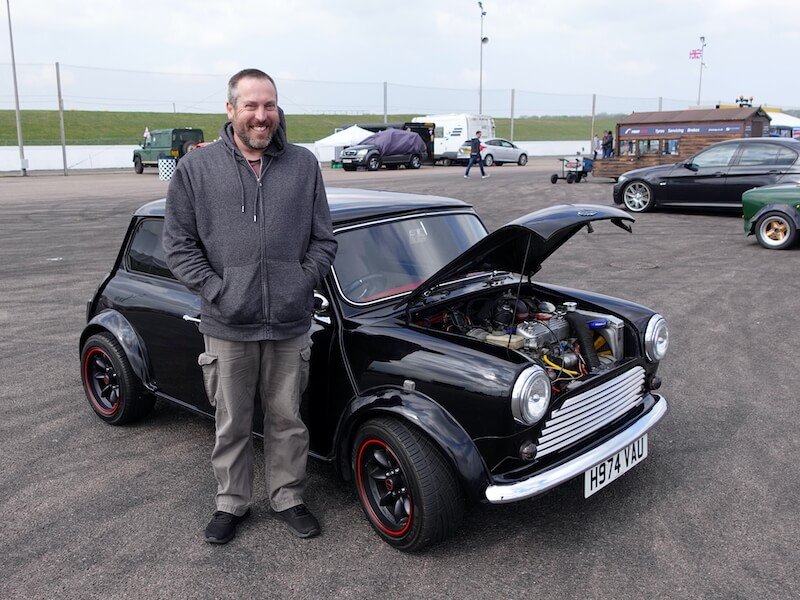 “I don’t think British cars are better, but I do think you get a soft spot in your heart for Minis once you’ve owned one. My first two cars were Minis and I came back to them about ten years ago when I went to buy a Range Rover, which I didn’t get, because this was next to it in the auction – I fell in love.

It was a standard 1990 Mini Sprite when I bought it, but it’s evolved over time. When you see something that interests you on somebody else’s car it’s great to have the freedom to try it out on your own. It looks a bit like a hot rod because it’s had a three-inch roof chop and because of that the glass windows didn’t fit so I had some made out of blackened perspex to match the rest of the car. I swapped out the engine for a Metro turbo which produces around 90 horsepower and tops out at about 95mph. It handles like a go kart around corners, but because of the size and how low you are to the ground it does feel enormously fast which brings a smile to your face.

It was always meant to be a fun car, it’s been there while the kids have grown up, and as a family, we do get about in it. We don’t avoid motorways, this is a car you can do everything in, including Mini events, rallies and track days so we’re used to being at the start line and waiting for the flag to go –it’s a good feeling. We’re Santa Pod regulars, we like the thrill of fast cars, but this was our first time out on the quarter mile track. Although we were one of the slowest cars we were up at 17, which isn’t bad.

I’m a mechanic and teach my son Leo the skills that I’ve got because I think you can drive a car better if you understand how it functions. The thing with these old-fashioned Minis is that if you press a pedal it moves a lever so it’s easy to understand the mechanical processes, get stuck in and enjoy it. It’s something we can do together, a bit of dad and lad stuff.”