FeaturesMe and my car: Chix and his Mk1 Triumph Stag

Me and my car: Chix and his Mk1 Triumph Stag

How this classic pariah helped a grieving son heal. 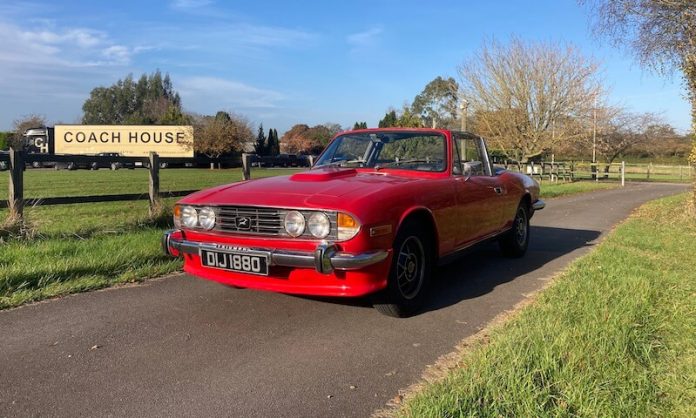 Lots of WD-40 and a little bit of divine intervention: father-of-four Chix tells Charlotte Vowden how his Triumph Stag became a restoration project for both man and machine.

In its original incarnation, the Triumph Stag had a reputation for unreliability, but fitted with a Ford Essex V6 engine, this 1971 Mk1 saloon was the answer to one man’s prayer. Supported by his family, his faith and a Haynes manual, Chix got his car, and his mental health, back on the road.

“It was two o’clock in the morning when I brought the Stag home. My family were asleep so I had to get it off the trailer and into the garage on my own; but the engine didn’t run, the steering was heavy, the brakes didn’t really work and the handbrake had completely failed. I managed to roll it backwards off the trailer, onto the drive and used the momentum to ‘sail’ her home like a pirate at the helm of a ship. She fit in the garage, but only just. 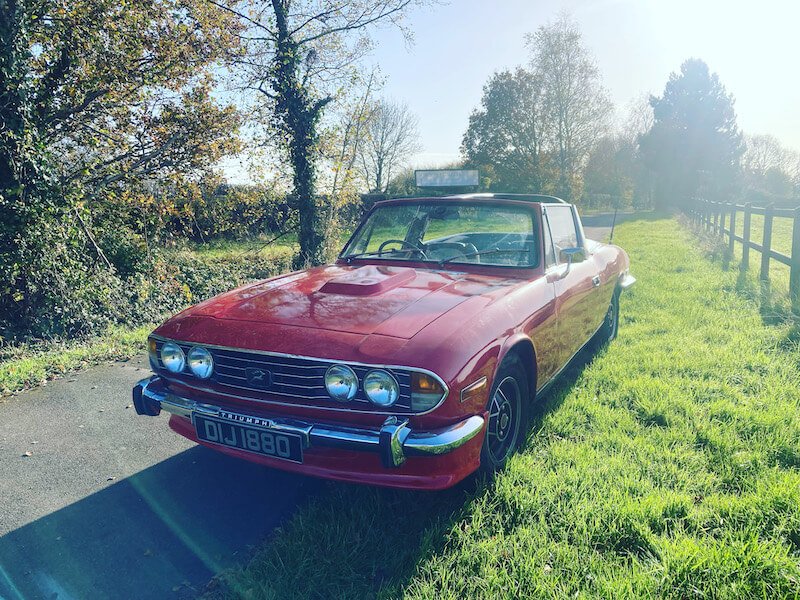 Hours earlier, after seeing the car for the first time, I found myself praying about it; at that moment in my life I was stressed out, I was grieving and I was a bit of a mess. I needed to know that if I bought this car I wasn’t being stupid or selfish – It wasn’t a request or a plea, it was more of a dialogue. I was like ‘hey God, I really want to do this, what do you think?’.

The Stag was on sale for a reasonable amount, but the guy eventually agreed to let me have it for much less – if I went to get it that night. My wife and I have four children and we foster so I was worried about spending money on something that was just for me; I wondered what I could do with the money that might be better, and questioned whether I should give it to charity. I knew that my dad, who passed away in 2014, would say ‘do it!’ but I needed reassuring, and for people who don’t have a faith, praying can be a bit like checking your moral conscience – you learn to listen to those little convictions and feelings. 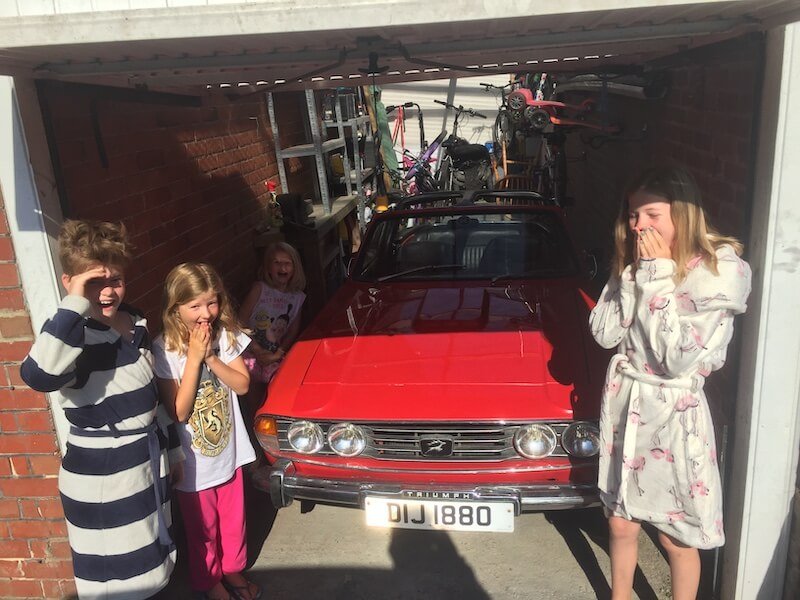 The phrase ‘you only live once’ is used all the time but it was really relevant. I’d been struggling for quite a while and knew I’d be a better person to everybody if my mind was in a happier place. I felt ‘if this is good for you, it’ll be good for your family, your longevity and your enjoyment of life’. It felt right to seize the day and I found peace in my decision because of the joy it might bring. The next morning, when I opened the garage door, my four kids went crazy. My wife, Kez, had already said if this was the car, then I should go for it. The car was a 1971 Mk1 Triumph Stag called Scarlett, who rocks a 3L Ford Essex V6. 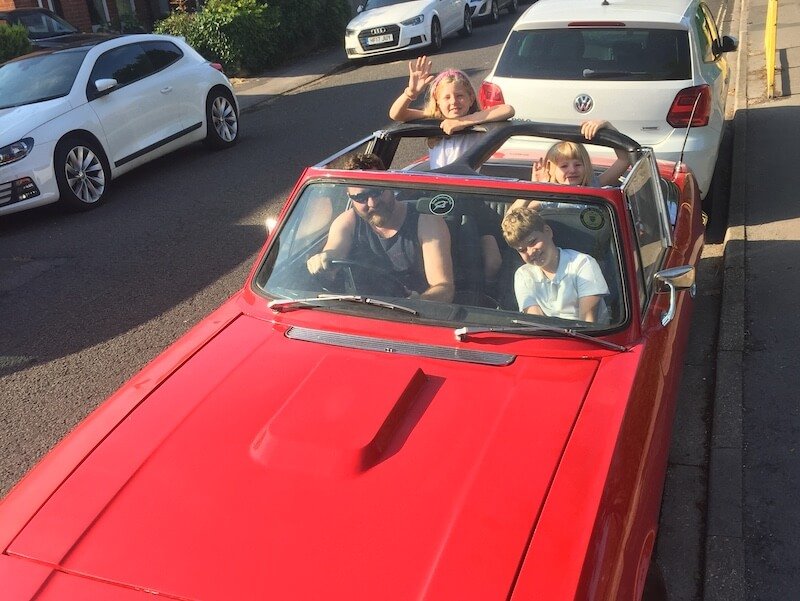 I remember talking to Vanelope, our nine-seater minibus, saying what a great job she’d done towing the Stag home that night and how I wasn’t going to stop loving her now I had a convertible! I love nature and being outdoors so the fact that it’s a convertible means I really appreciate going for drives. God speaks to me in that, but it’s not just nature that God created, he created man, and man created this machine; I can enjoy that just as much as a sunset. It’s all so immersive; driving a car like this requires your full attention, you feel like you become a part of it and it a part of you. However, the wind can be a bit of an issue for my girls, they don’t like it because their hair gets blown all over the place, but I’ll only put the roof up if it’s raining. 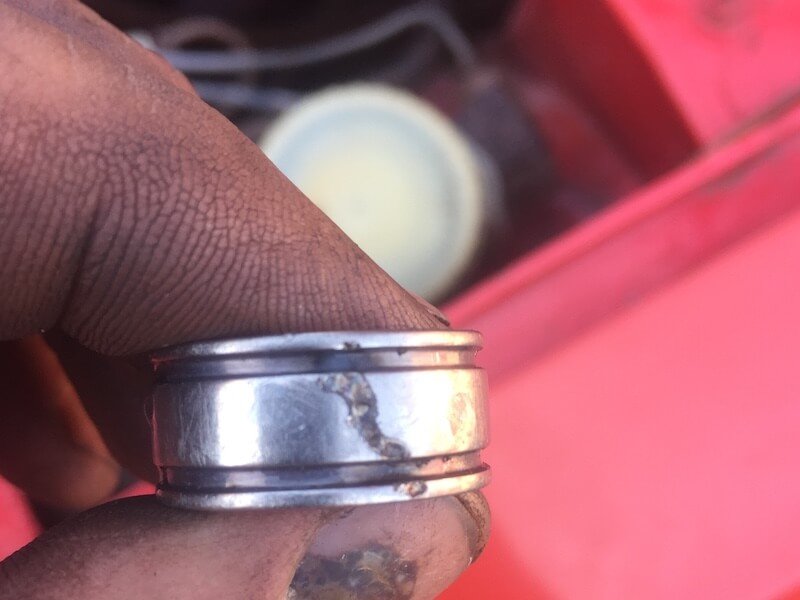 My solid Titanium wedding ring now bears two scars in the shape of lightning strikes because of the Stag; it took the brunt of an electric shock when I was in the process of replacing the starter motor. It was a big old bang and really made me jump, but luckily the only injury I got was a burnt finger – I learnt my lesson not to wear it when I’m working on the car.

I left home in North Wales at 18 and came down to Southampton where I met this girl with an awesome four-speed Escort estate. We drove it to Scotland and back, ended up getting married, and four kids and many ‘sensible’ cars later I thought my days of owning something special would never happen – we started the ‘Chix’s car fund’ jar on my 40th birthday. 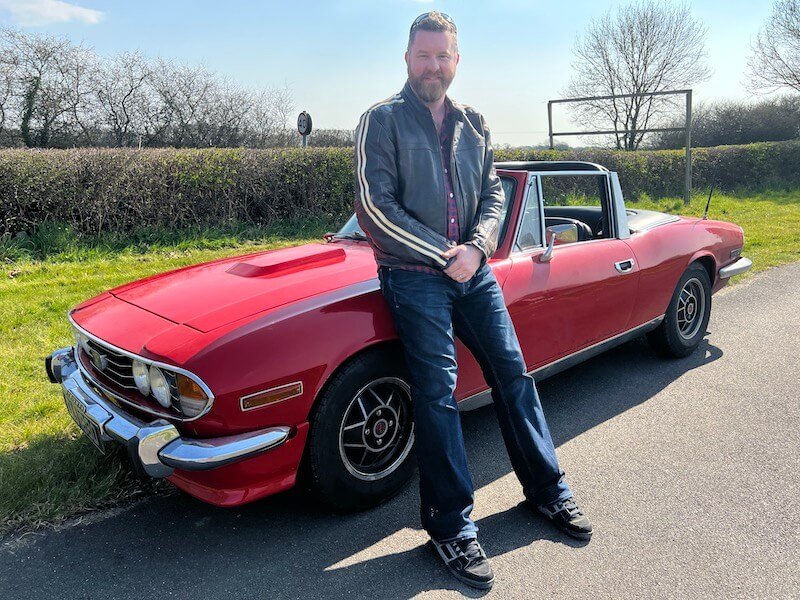 I’d always had a soft spot for aggressive looking American V8s, so that’s how the Triumph Stag found its way onto my radar, but the more I read about them, the more disappointed I got. People complained about engine trouble and overheating, and because I’d never done anything under the bonnet before I didn’t want my first mechanical experience to be real trouble from the start. When I found Scarlett, with her Ford V6 engine, I thought wow, I’m going to have to make this mine. When I showed my wife a picture, she was chuffed. She doesn’t like big ‘ugly’ American cars and she doesn’t like showing off so her approval was important; I wouldn’t want to drive anything she wasn’t comfortable in.

When I first got the stag, it didn’t run. The engine was a mess and it was like a four-year-old had done the wiring, but the bodywork was solid. The DIY ethos was a big part of the journey I wanted to have with the car and although I’ve had a lot of help from my mate Gary, a mechanic, I think I’m a natural problem solver, which has helped because it was major problem after major problem. Thirty seconds after I started her up and drove her off for the first time, the power steering hose exploded and it was back to square one. I was gutted, but now it’s at the point where it’s a really reliable daily drive. That process has been like therapy because I get a massive boost from having done things myself with help from a Haynes manual or a friend on the phone. My son and I fixed the handbrake and when I stop at traffic lights on a hill I get a real buzz, I feel like shouting ‘ladies and gentlemen, check this out!’. 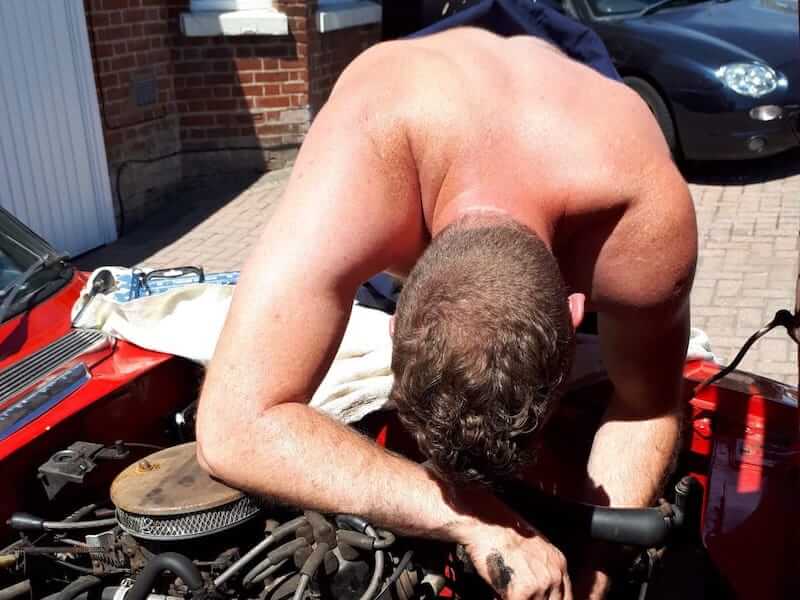 When I couldn’t fix the gearbox mount, after almost two years of successful repairing and replacing, I felt defeated for the first time. I write a blog about the car and my daughter, Grace, asked if I was going to post about it. I said I was too sad, but she said ‘no, you have to because you always tell us that making mistakes is part of how you learn and there might be other people who have had the same experience and you need to encourage them.’ It was so insightful; she’s only 13.

Scarlett has got it where it counts, but I don’t have to break the speed limit to feel good. My dad showed me what an overdrive switch does in a saffron yellow Triumph Stag (I must have been around 10 years old) – in short, he’s the reason why I love cars. We did go through them quite a lot when I was growing up, mainly because mum kept crashing them, but they were a big part of family life. As soon as my dad got in a car, he was a different person and when it was just us he’d be a little bit more risky and say ‘let’s see how quick we can do a quarter mile’. 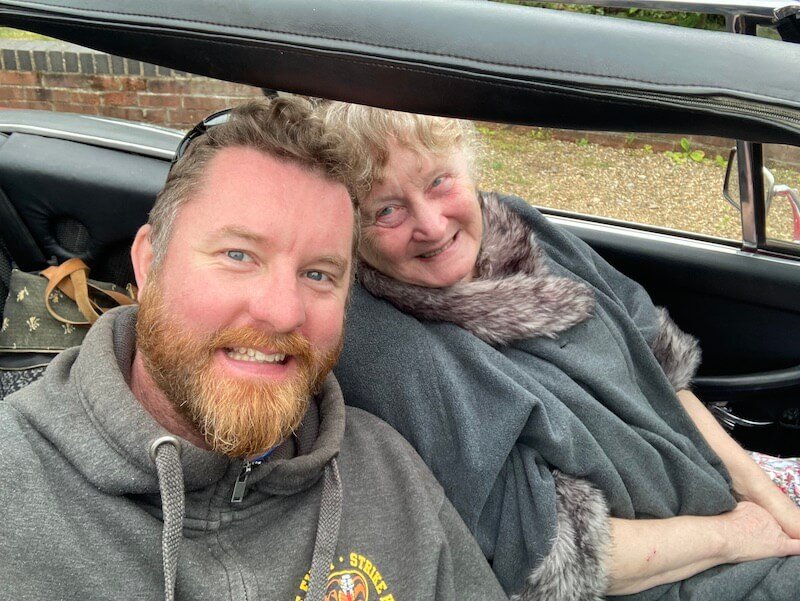 My family have seen how happy the Stag has made me, there’s so much tied up in it now that it’s part of who I am and subsequently part of who they are as well. The kids love taking trips to the beach to eat ice cream or chips and watch the ships coming in, and because they’re precious I made the decision to put seatbelts in. My dear old mam loves going for a ride too. 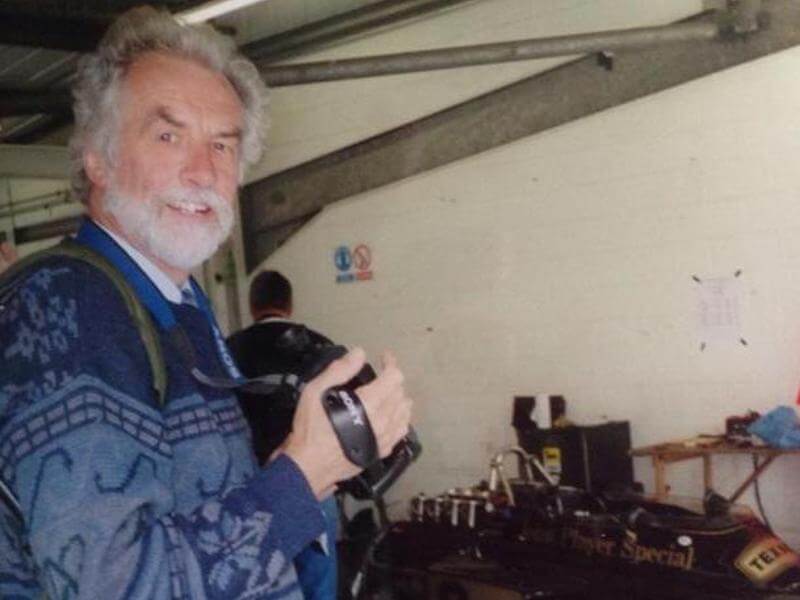 I’d not properly grieved for my dad until I got Scarlett. Working on her gave time to let my thoughts run a little bit which made room for memories to surface. There were days when I would have loved to phone him and tell him what I’d done; it’s been a healthy process.

I’m not really superstitious, but there’s one standout moment when I felt like he was really close. Picture it; I was driving with the top down along straight, open country lanes, whizzing past cornfields, the sun was setting so beautifully, there wasn’t another car on the road, and I was really opening her up. I had my music playing on random through a sound system I’d made out of a pair of my dad’s old cabinet speakers and when an old trad jazz track called South Rampart Street Parade came on, suddenly, he was there. It was one of his favourite pieces of music and I remember talking out loud to him, I said: ’Dad, I’m playing your song, through your speakers and I’m switching her into overdrive!’” 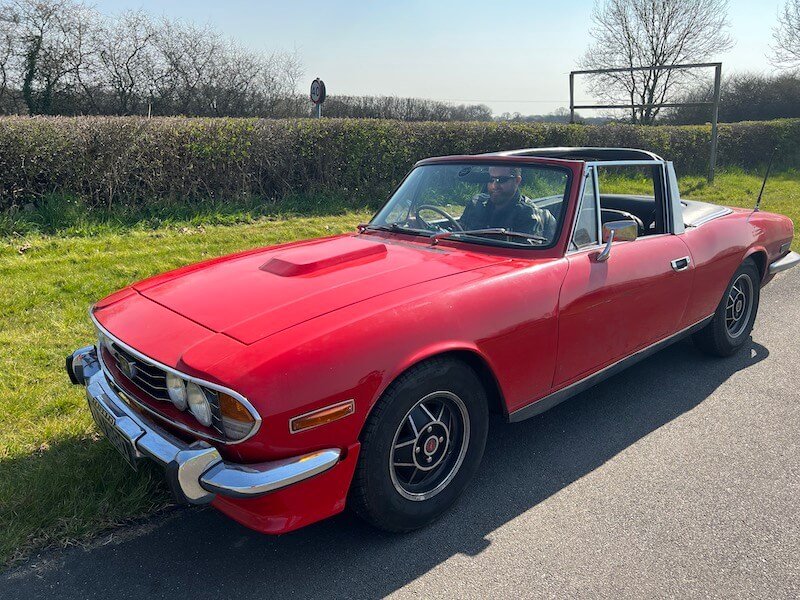