FeaturesMe and My Car: Harriet Fuller and her VW Beetle

’Tis always the season to fall in love with a Bug.

A Bug is for life, not just for Christmas! Photographer Harriet Fuller tells Charlotte Vowden why her VW Beetle is worthy of far more regular outings.

The VW Beetle may have been a by-product of war but it became a symbol of peace. Over 21.5 million were built between 1938 and 2003, bringing glad tidings of motoring joy to the masses, but for one owner, a sixties model has been the catalyst for realising her creative dreams.

“Capturing a classic car in a photograph taken on film is such a lovely thing, they both have a vintage aesthetic that goes so well together. I get pretty good panoramic views from inside my two-tone 1966 VW Beetle Baloo but I love being outside, especially if it involves photographing cars; I spend a lot of time driving around so that I can capture him in different places. The Cotswolds lends itself well to classic car photography because older buildings make a complimentary background to older vehicles; Baloo attracted quite a crowd of tourists when I took him to Oxford and parked him under the Bridge of Sighs. It was brilliant.

I’m constantly changing my mind about his best angle, I love his curves, and sometimes I prefer the back of him, then other times it’s all about the wings or that classic silhouette shot from the side. It doesn’t really matter though because love is love and I appreciate all classic cars for what they are and how they look. Baloo’s numberplate, ‘LGT’ gets noticed because it reminds people of LGBT [the initialism that stands for lesbian, gay, bisexual, and transgender] and that’s why I think he’s proud to be gay.

Everybody assumes owning a Beetle was a childhood fantasy of mine, or there’s a family connection, but it happened randomly because of one really grainy picture of a 1972 two-tone red and cream bug I’d seen online; it was posted by my friend who was selling it for £1800 and I bought it blind with help from my mum. 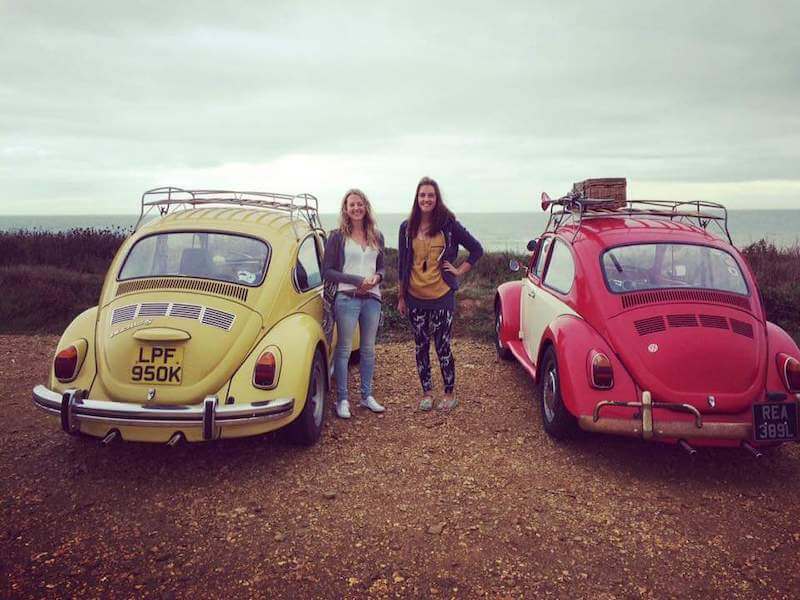 My other half, Adam, thought I was crackers, I’d never driven a classic car before, let alone owned one, but I’d already paid for Rea (her number plate was REA389L) when we went to pick her up. Amazingly, I got in the car and it was like a glove that fit, I came to it so easily and I was obsessed within minutes. It was winter, it was freezing, and I decided to take her on a five hour drive to my dad’s but didn’t think to bring extra layers. I was on my own in the car but I didn’t feel lonely because she was my partner and even though I was frozen by the time I arrived, I couldn’t stop smiling. I couldn’t get over the fact that I had a classic car, it was like experiencing the adrenaline rush after having the biggest coffee in the world!

Rea is the car I had my first breakdown in, and I was like OK so this is what it’s going to be like. I got upset, I cried a lot, but I didn’t freak out; it took a few days of searching YouTube and the Haynes manual to get her running again. Rea was a rust bucket and a mongrel made up of a complex mix of donor parts so I put all my trust in a local mechanic to get her restored but he absolutely ruined her. I rescued what was left of her but she was too far gone, I couldn’t afford to spend the money needed to bring her back to life, so she was sold as parts. I went through a lot of hardship with her but everything happens for a reason and I count my blessings because I now have Baloo. 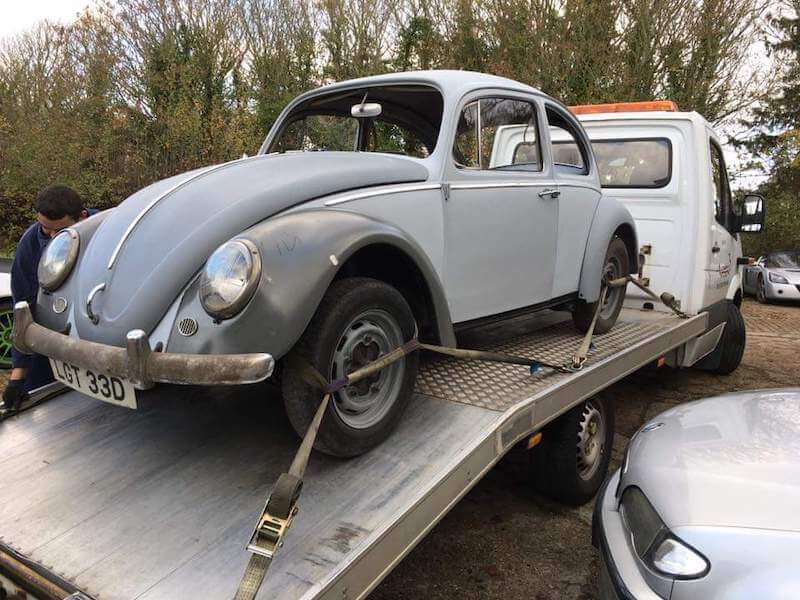 Baloo had been off the road since the seventies but what happened to him is a complete mystery. I found him just before Christmas in 2018 as a restoration project that was at a point where it just needed to be painted and put back together. It was a perfect opportunity for me to really make him my own car and make my own story with him, it was a bit like building a house with lots of decisions to make. I’d felt really low up until this moment, and even though those decisions came with pressure, it was all up from there. I put Rea’s lights on him in her memory.

Originally Baloo was a beautiful stoney beige but I thought I’d go for something really eye-catching that wasn’t a classic VW Beetle colour which is how I landed on two-tone cream and blue. I’ve had people message me on social media to say they’ve had their painted the same which is cool. 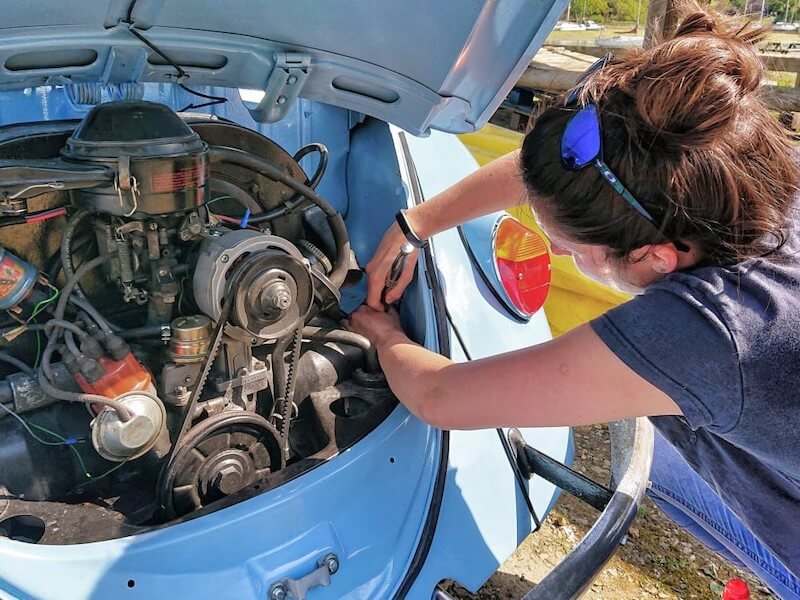 I’ve had to rebuild his 1200 engine twice. The second time was because he hadn’t been run-in right but I felt like I had to prove something – that I could go on a big adventure to the mainland from the Isle of Wight, where I lived –  so I ignored the warning signs and seized his engine. I proved a point; that he wasn’t ready to do what I wanted him to do. It led to me having to get my hands dirty during lockdown and rebuild his engine, with guidance every step of the way from my mechanic (I think we both learnt a lot about being patient) it was a real team effort. The best part was the first test of the engine to make sure it worked before putting it back in, so much time had lapsed since I’d deadened him that hearing it felt really, really good.

When I’m in Baloo, it’s a whole experience, like being in a bit of a bubble. I’ve kept his interior clean and clear, and he looks really pretty with his cream door cards and seats. There’s no radio in the dash, just the knobs that you need, but I have put in a shelf for practical reasons. He’s also very quirky, if you want the air-con on, you just open up the little quarterlight windows and it chucks fresh air at you which makes the flower I’ve got in there flutter around.

Some people might think it’s weird, but I think it’s fun to use occasions like Halloween and Christmas as an excuse to dress Baloo up, especially when my friend Zoe, who also has a VW Beetle, joins in. We’ve been to a couple of VW specific shows, there’s a massive scene for it out there, but I like to broaden my horizons.

I’ve always been creative but it was a Christmas themed shoot I did on the Isle of Wight with a local photographer, Alice Greenfield, who had fallen in love with Baloo that ultimately inspired me to quit my job and realise my dream of setting up my own photography business. Alice worshipped my car and that came across in the calibre of her work, I’m still in awe of the images she took – the most iconic one is the profile of Baloo with the Christmas tree on his roof – as well as the video she made of that day but I wanted to do it myself so she became my mentor.

Driving Baloo isn’t an easy task, sometimes I have to really psych myself up and there’s a fair bit of prior planning and thinking involved and I guess going out to take pictures is similar, especially now I shoot in manual rather than automatic. It’s a huge leap because I have to make all the adjustments on the camera to get a photo to work, a bit like maintaining Baloo, so I have to drink a bit more coffee in the morning! Taking people out for shoots with their classic cars has become a massive deal for me, I love seeing people’s faces light up when they see a photo I’ve taken. 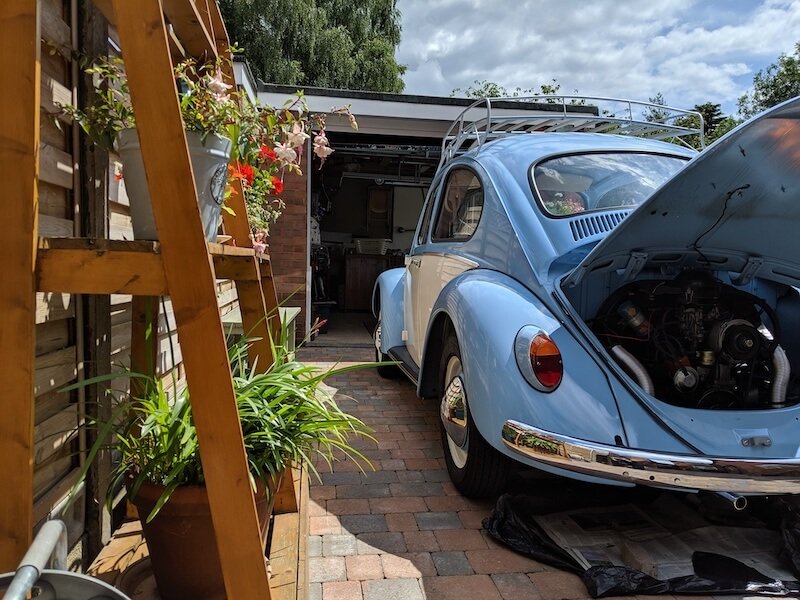 When I moved to Weymouth on the mainland, I realised how much of a role Baloo has played in my life because having him has opened so many doors to things I never expected would happen. I’m constantly looking for the next big adventure, I want to make the most of my life and Baloo is part of that because regardless of what happens, when we’re out there together, we’re in it together. A VW Beetle is for life, not just for Christmas.