FeaturesMe and my car: Jane Brinkmann and her Series III ‘Outlaw Daisy’ 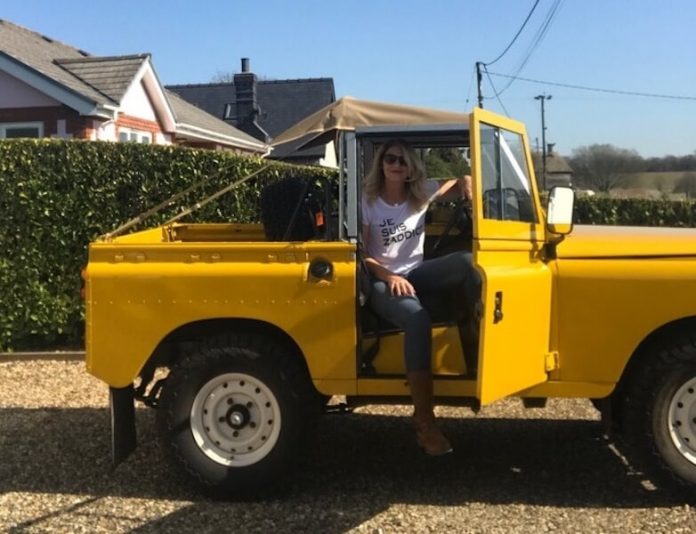 Just for Jane: the owner of this brightly dressed Series III tells Charlotte Vowden why she’s fallen in love with a Land Rover that gives her blood blisters and a rough ride.

The most obvious, yet subtle, difference between the Series II and series III Land Rover was the introduction of a moulded grille and revised interior, but Jane Brinkmann’s outrageously dressed Inca Yellow short-wheelbase model, which came off the production line in 1981, is proof that driving something which unashamedly stands out from the crowd can be good for self-esteem.

“I probably chose Daisy because she is the complete opposite to me. I’m quite shy and socially awkward, whereas she’s noisy, minimalistic, brightly dressed and likes lots of attention. One thing that really sold her to me was the colour, but the clincher was the number plate; we had just come out of another lockdown and I thought “OUT” was symbolic of being able to go out again. 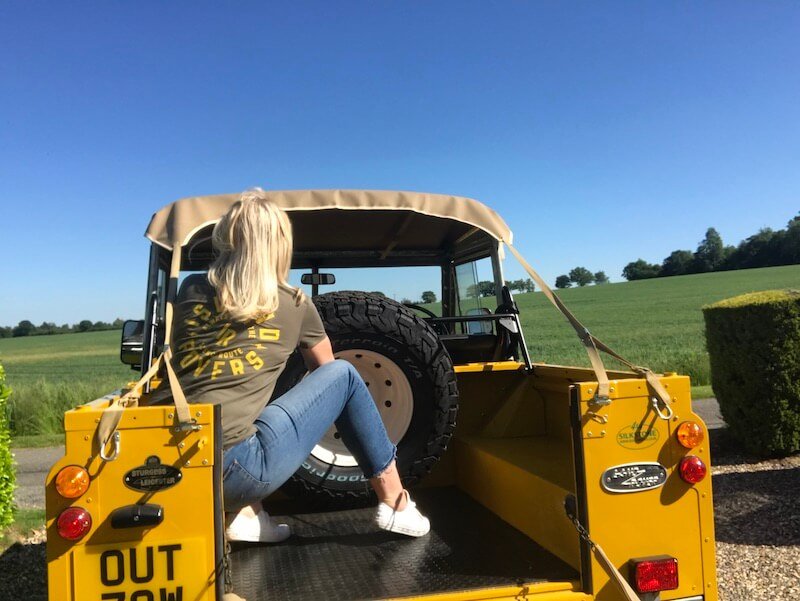 I don’t think people realise how hard Land Rovers can be to drive. It’s quite a rough ride sometimes and Daisy has no power steering so I tend to get blood blisters on my hands. It could be an old woman thing, but I wonder if anyone else gets them.

Daisy’s got three front seats, but generally, I drive on my own. I have to keep my wits about me because she can be a bit wallowy and all over the place, so in that respect I don’t relax, but it does take my mind off other things. She’s a 1981 Series III with a 200Tdi engine, I don’t know what the brake horsepower is (I imagine it’s not a lot) but she’ll do 30-40mph on a highway, perhaps 45mph if I’m feeling confident, but I do enjoy just trundling along through the countryside. When I’m out on the road, despite the fact I’m the one in the Land Rover, people pull over on verges to let me go past, it’s hilarious. 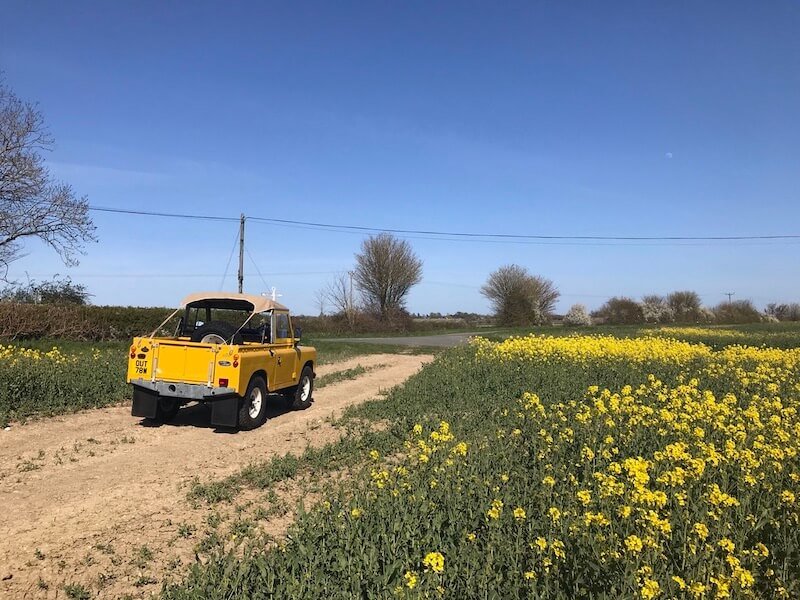 During those first few months of ownership I would barely go ten miles from home because I was worried that she’d break down, but I’m getting braver and going further afield – I’ve even been off-roading, just easy lanes, nothing too scratchy.

I’m very protective about my cars and although he is allowed, I don’t like it when my husband drives them. He’s used to being a bit more rough and ready with vehicles, but the Series needs careful handling – everything has to be done slowly and properly. I’ve got the knack for it, but if you rush to put her into the next gear it won’t happen.

I live in Suffolk and am probably instantly recognisable as the mad woman with the yellow Land Rover. I can’t think of an occasion when we’ve been out and no one has stopped to have a chat or waved when we’ve gone past, it’s really nice. 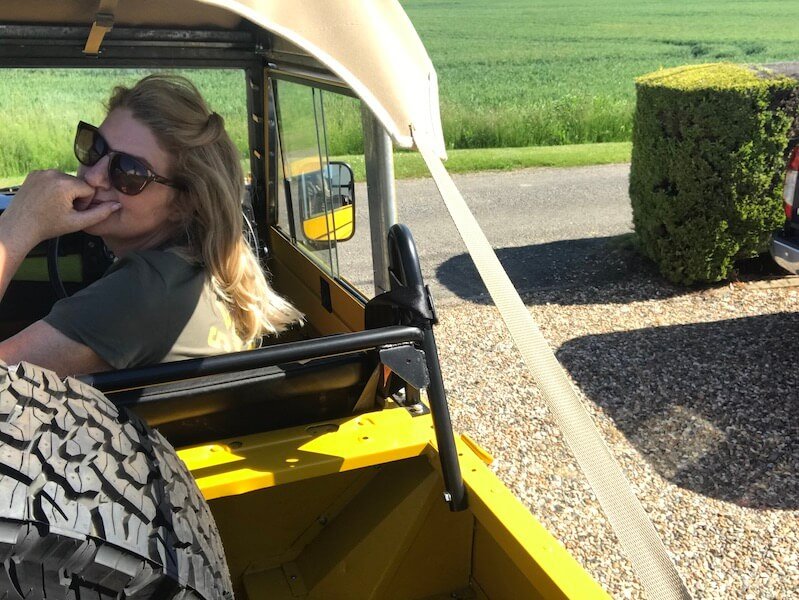 The Series isn’t insulated or soundproofed so she’s very noisy, which takes a lot of getting used to, and when stones and things hit, it often makes me jump. She hasn’t got a stereo, but you wouldn’t be able to hear it anyway, so I sing to entertain myself.

I set up Daisy’s Instagram account @out.lawdaisy for fun, and most of the captions are lyrics to songs that match the location I’ve taken the photograph in – it’s become a bit of a hobby. My favourite was taken outside the Bury St Edmunds sugar factory and captioned with lyrics from “Pour Some Sugar On Me” by Def Leppard, it got runner up in Land Rover Owner International’s photo of the year competition. Another one I took in a borage field near me as a nod to the Hendrix song “Purple Haze” is featured in the 2022 Britpart calendar. 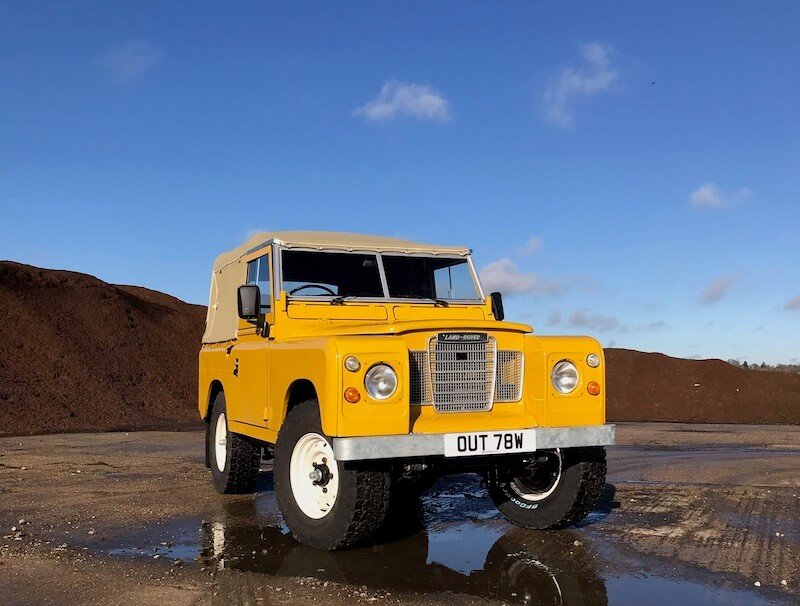 Every time I go out in Daisy I have a pinch myself moment. I was driving home one day and spotted a lovely Rolls-Royce with the number plate “AL”. The song “You Can Call Me Al” by Paul Simon popped into my mind and I asked the owner if I could do a photoshoot with Daisy. We agreed a day to meet and as soon as the Roller turned up, the owner jumped out, handed me the keys and said “take it for a spin”, so there I was driving this beautiful modern Black Badge Wraith Rolls-Royce around the village, that would not have happened unless I owned Daisy. 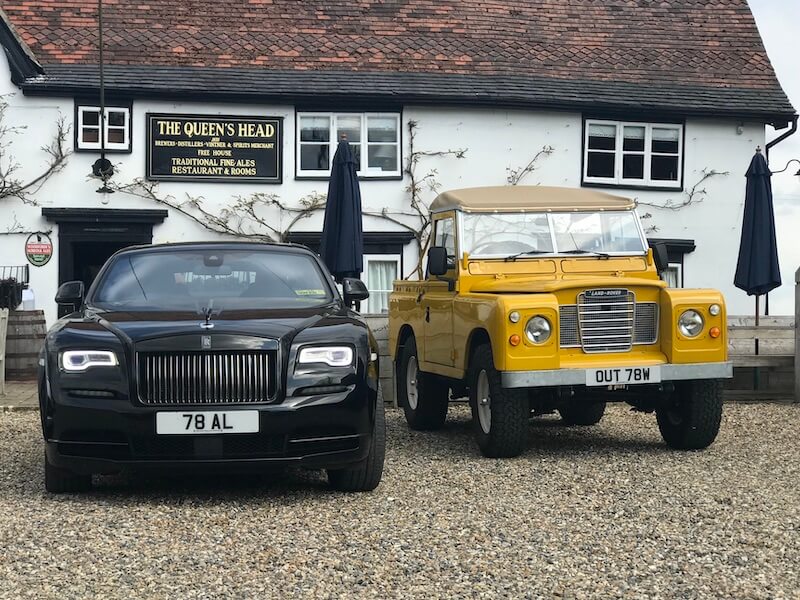 My Land Rover obsession has come out of nowhere. I’ve always liked cars, but in the past I’ve been drawn to fast BMWs, so this is a complete and utter change. I used to have quite a stressful, pressurised job in the corporate world but decided to start my own business as a letting agent about three years ago. As I was working from home I had a little more time, and although I enjoyed going with my husband when he raced motorcycles, I didn’t have a hobby that was just for me.

During a long, off the beaten track dog walk we came across an abandoned Series III in a field. It was miles out of the way but I kept going back to it and became obsessed with the idea of owning it. I found out the owner was a local farmer but he was adamant he wasn’t going to sell it, so I started to search for another car and came across Daisy.

Daisy had been restored about four years before I bought her and kept in a barn. It was the most expensive one I’d seen and I tried to be calm so I could do a deal, but the owner wasn’t having any of it. My husband was in disbelief, I do have expensive taste, but he supported me – she’s my love rather than his. 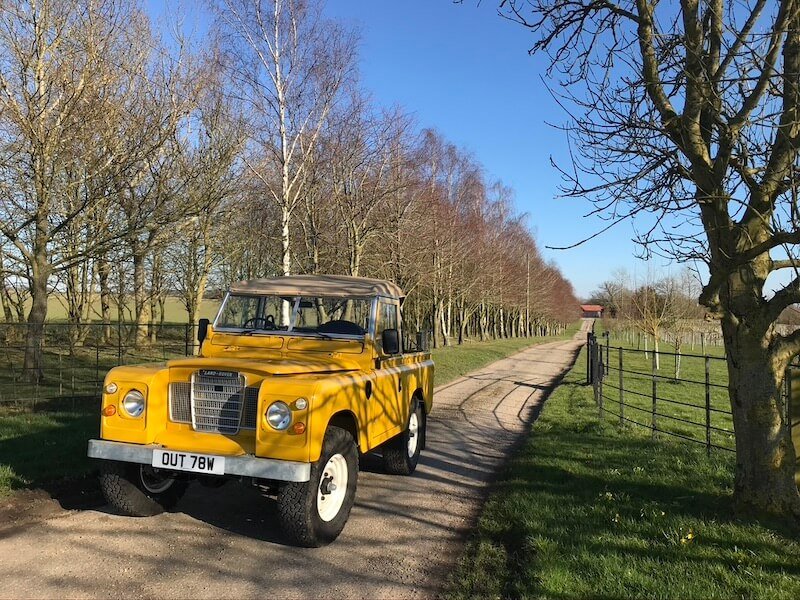 I had to wait about three and a half weeks before she was delivered, I was so desperate to get her, and was completely over the moon when she turned up on the back of the trailer – I think it’s the most excited I’ve ever been. When the seller mentioned the name OUTLAW because of the number plate, Outlaw Daisy was born.

I don’t wear yellow and she’s the brightest car I’ve owned. I was a little bit worried to start with, I thought, am I buying a noddy car, am I going to get laughed at, but I think her colour makes her even more joyful.

The biggest lesson I’ve learned about owning a Land Rover is that you’ve got to keep on top of the maintenance – if you don’t, you could be in a lot of trouble. Unfortunately, they leak oil and fluids from all manner of places so you have to check the levels at least every few weeks. I used to get really upset about every little thing that went wrong, and although I’m not an expert, now I know the common problems and what to look out for, I feel as though I could advise somebody else. 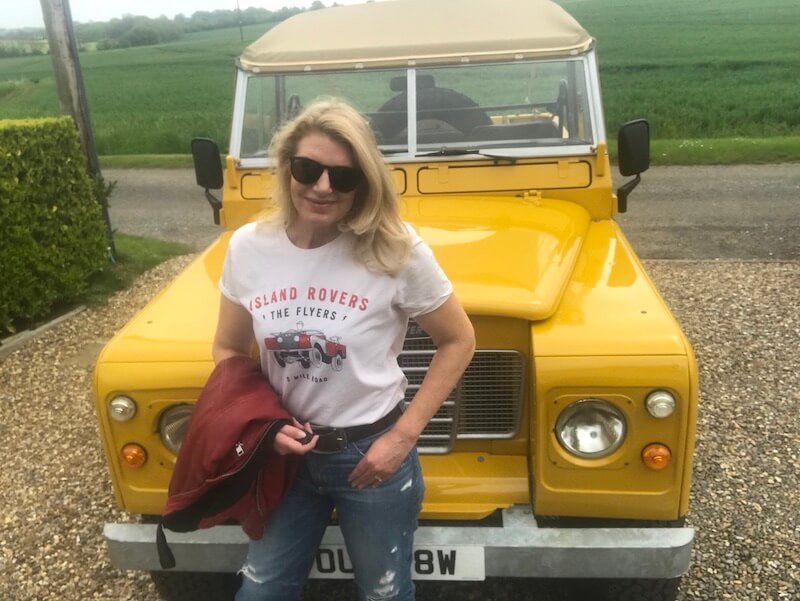 I think Land Rovers become a bit of an addiction; once you get one, you tend to want to get another. Since getting Daisy, I’ve bought a second pick-up Land Rover that’s a bit more of a project. I would recommend anyone getting one but the trouble with these old Land Rovers is you never quite know what’s going on underneath, so it’s important to take someone with you who knows what they are doing to cast a careful eye over it. A galvanised chassis is one of the main things that you need to look out for because although something might look all right, they can get patched up and blackened out.

A couple of weeks after I got Daisy I took her to my local Land Rover specialist to get her looked at, and they came back with about a huge list of things that were wrong with her. I literally cried for two or three hours and my husband said “I don’t think you’d cry that much if I died” – which of course isn’t true, but I’m so invested in her, he knows she’s my world. Even if you’ve got the nicest looking car that’s in showroom condition, it will always need money spending on it. There will be things that go wrong in the future, but it can all be fixed. 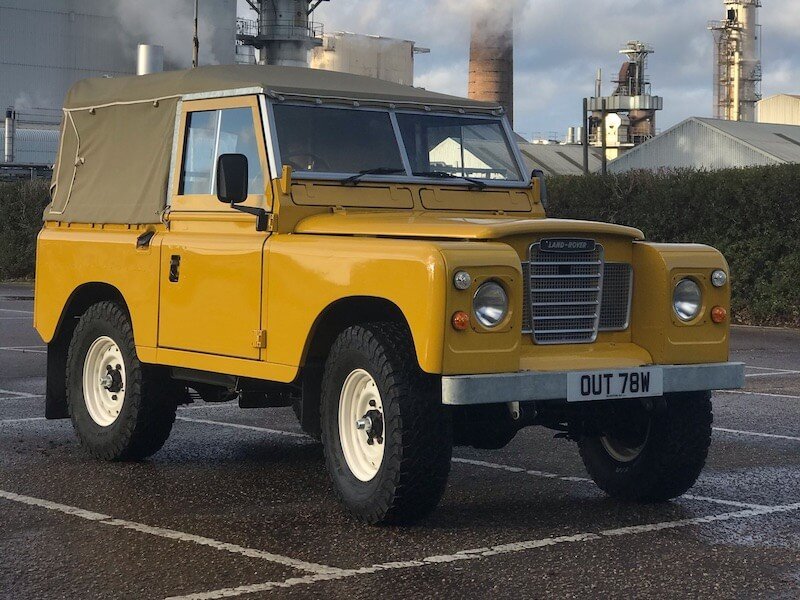 I might be getting older, but I’m still a kid at heart; I’m like Peter Pan, I just can’t seem to grow up. Perhaps it’s because she was born in 1981, but Outlaw Daisy makes me feel like a teenager again. She came into my life at the right time and has made it so much better in so many ways.”