FeaturesMe and my car: Jon-Paul Lennard and his Vauxhall Viva HB

Has this 23-year-old built the world’s first Vauxhall Viva HB with a Turbo 1256? 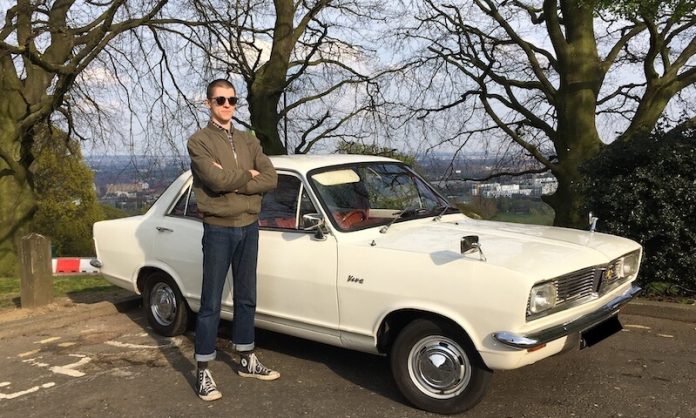 He passed his test in it, and then he turbo’d it. Jon-Paul Lennard tells Charlotte Vowden why, and how, he transformed his four-door Vauxhall Viva HB into a one of a kind performance car.

Meet this sharp-suited Vauxhall Viva at a red light and you’ll be in for a surprise when it flashes green; there’s a Turbo 1256 beneath its bonnet. Taking inspiration from some of the greatest mechanical masterminds of seventies motorsport, 23-year-old Jon-Paul Lennard has turned his humble HB into a magnificent 100bhp machine. He reveals how a hands-on, homemade and meticulous approach has enabled him to give his ride full-on drive.

“If I were to write a book, the title would be ‘Wouldn’t it be funny if…’. I thought I’d be handicapping myself with a classic as my first car, it all started off as a bit of a joke, but four years later I daily the world’s first (possibly) Vauxhall Viva HB with a Turbo 1256 and I built it myself – a relatively major commitment, but I have a methodical personality so enjoy the technical aspect of cars. 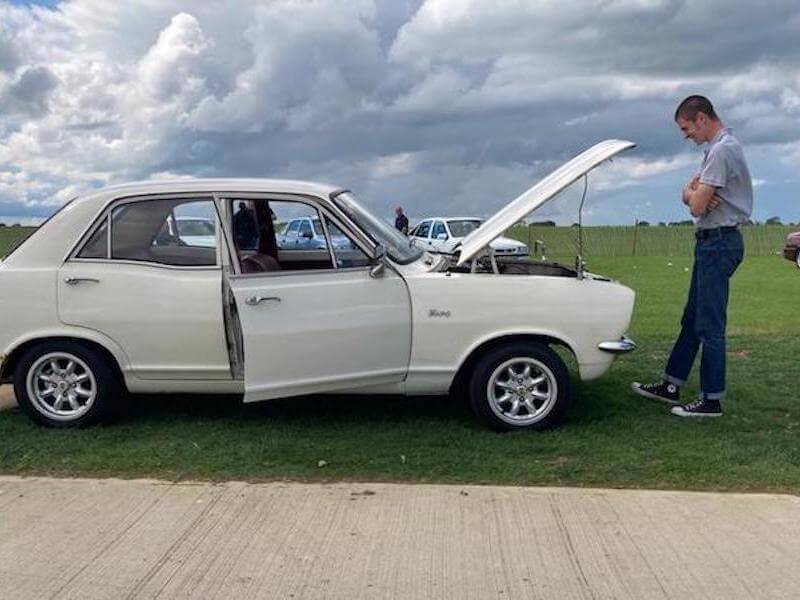 How many people can say they passed their test in a 50-plus-year-old car? It’s kind of magical. My HB is a 1968 rare white four-door that had been stored for 20 years. It had a couple of minor issues – the water pump needed replacing and the alternator was whiny – but it didn’t take long to make it roadworthy. I learnt to drive in it with my dad giving me pointers but to be able to take your driving test in your own car it has to meet certain requirements. One of the rules was that the passenger, i.e. the examiner, needs a headrest so I made a bracket and nicked the race seat out of my dad’s car. When I was asked to do an emergency stop, the Viva stopped on a sixpence, which I don’t think the examiner was expecting. 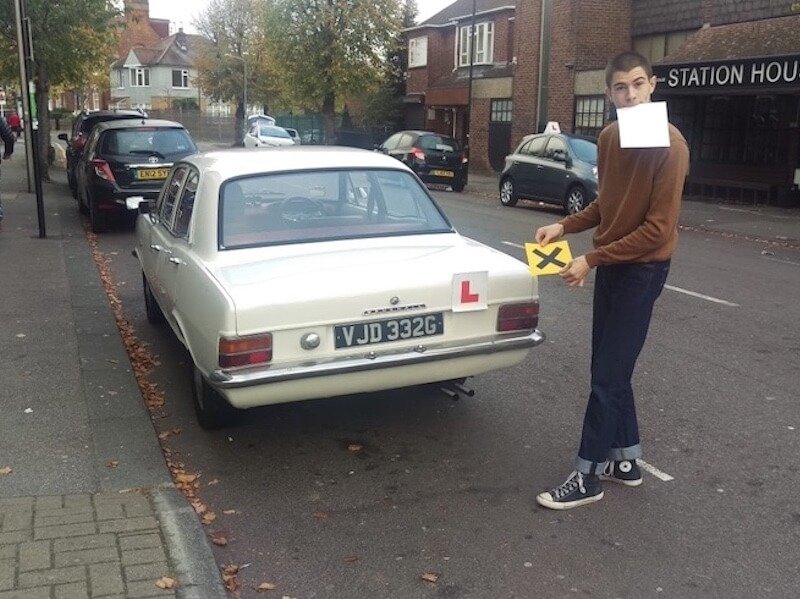 In the early seventies Vauxhall dealers created their own motorsport organisation called Dealer Team Vauxhall (DTV) and came up with a bunch of crazy ideas which included making performance parts for the Viva. To get into the minds of the top men at DTV I read a fantastic book called Tuning Vivas and Firenzas by Chris Coburn and Bill Blydenstein, who were responsible for the team’s early successes, and I’ve put my own spin on things they did. Haynes manuals were also a godsend in the beginning when everything was standard. 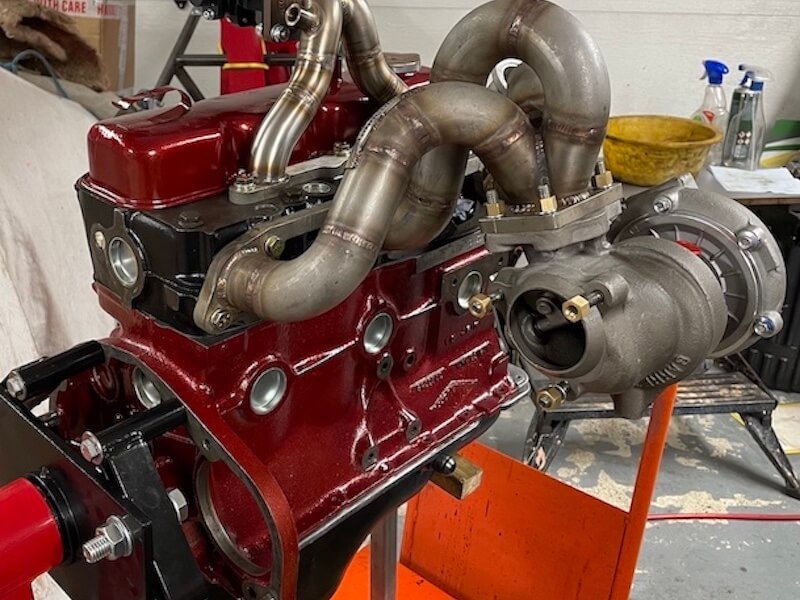 I wanted a performance engine but had to be smart about it because of the cost of insurance. I also wanted something different and no one else has turbocharged a standard engine, as far as I know. I designed the entire kit myself using CAD software and got myself a mill, a lathe and a bandsaw so I could do all the work at home. I measured everything by hand so I could map it all out (a quicker way of doing it is to get a 3D scan of the engine bay) and although a stupid amount of hours went into it, when it came down to it, the engine – a 1256 that had been turfed out of a HC – dropped straight in as calculated. 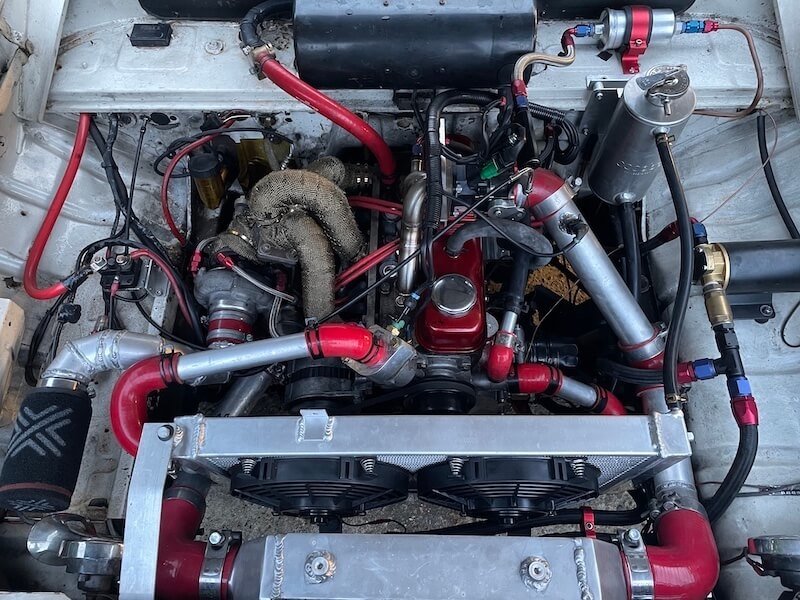 Throughout the process I considered the possibilities I had with each component and how I might be able to adapt them in the future. For example I made a stainless steel exhaust with a section that I can take out and put a silencer on, which is what I plan to do as I refine the car.

As standard, Vivas are 60bhp, and in the book they said 100bhp is their limit, so I wanted to see if that was true. Gerry Johnstone, who was a big part of DTV and the mechanical mastermind behind engine tuning, said I was mad because when Vauxhall came up with bigger engines they dropped the 1256. I think these little push rod engines failed back in the day because they were revving the absolute nuts off them and they weren’t designed for it. So I didn’t do that, I made sure the power is down low by keeping the standard camshaft – it’s a lot nippier at lower speeds which surprises people during the old traffic light grand prix. 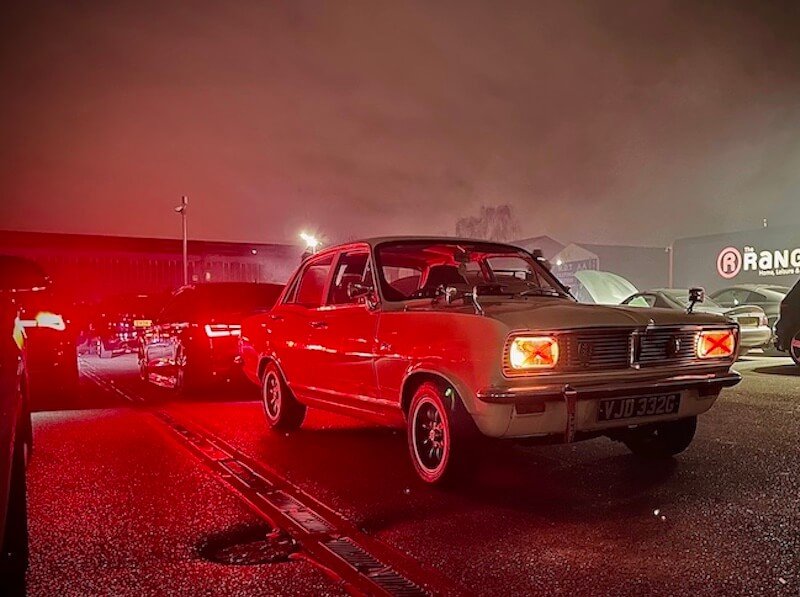 The first big thing I made was a new thermostat housing because I needed an outlet from the turbo for the coolant. I put in a new cylinder head and opened up the chambers to aid flow but didn’t skim the head because a turbo car that’s 50-years-old ain’t gonna like the massively high compression that it would create. I settled with an 8.5:1 compression ratio.

The rods are probably the most fiddled with component, I shaved 50 grams from each one and the flywheel now weighs less than five kilos. I spent an arm and a leg on a Mini A series fuel injection kit, and couldn’t use half the parts, but kept things like the throttle body and various sensors. I made a fuel return sandwich plate that sits underneath the fuel level sender to provide non-invasive return of fuel back to the tank. To run a five-speed Ford Type 9 gearbox, which is very popular in kit cars, I had to figure out a whole new clutch arrangement. Unfortunately it’s not great in first, but on the upside, I’ve now got a fifth that allows it to cruise easily at 80mph at about 4000 revs. 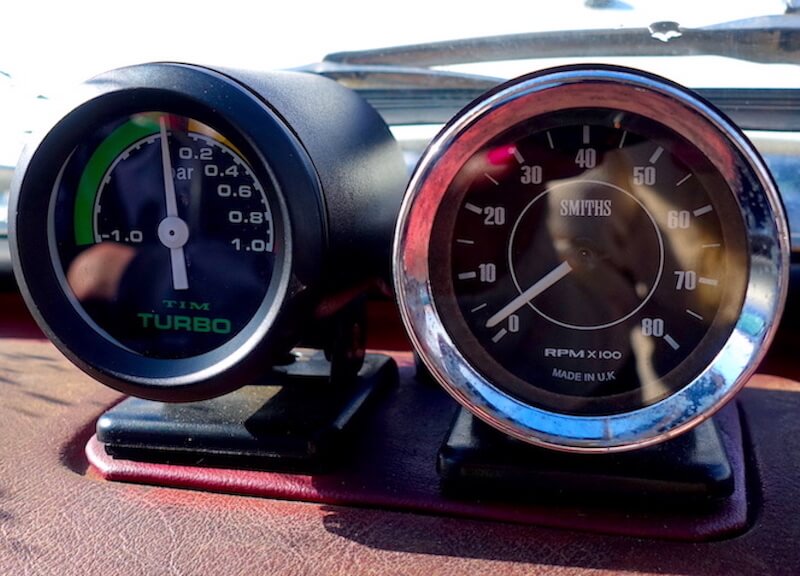 There were times when I was up until three o’clock in the morning trying to figure out how to get round things that were going wrong but I’m not the kind of person that loses my rag, it doesn’t help, so I just kept at it. Welding the sump was a process of trial and error because I didn’t know how to do it, and on the first attempt, it leaked. When I painted the block – on Christmas Day – I tried to get in touch with a more flowery, creative side so used an anodized paint to make it look nice. It was worth it.

There have been a few failures here and there, none of which are due to power increases, but I know that car inside out so when something happens I always have a bunch of ideas about what’s causing the problem. One night, after giving it a top speed run, I pulled over and could see something glowing. I thought it was on fire – which would have made a mega story – but it was the manifold that had got really hot and was cooking the clutch cable. I always carry a fire extinguisher because that seventeen quid spent once might save the entire car. I’ve relocated the battery to the boot due to heat issues and fitted a Vauxhall Nova radiator, which has a bigger capacity, so helps with cooling. 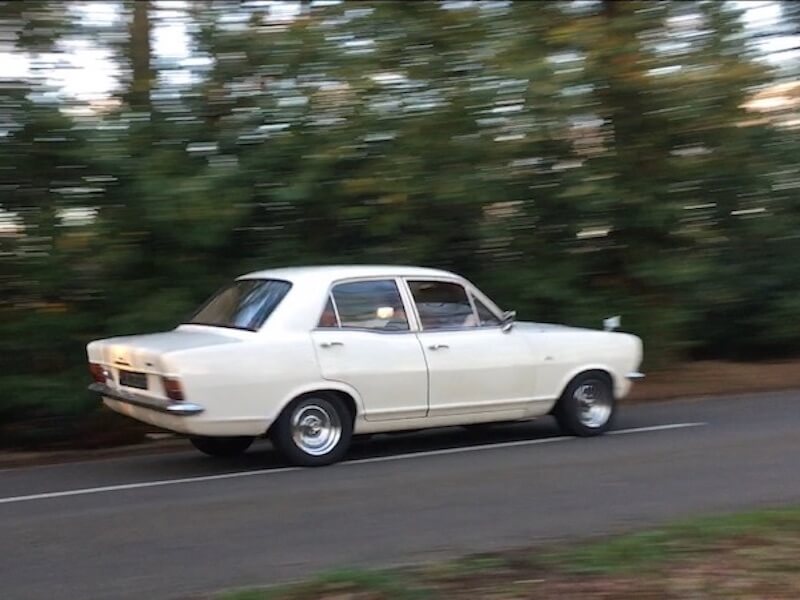 My engine can put out 100bph on the nose. Now I’ve proved that it can be done and I’m confident it’s durable, it’s time to push it a bit harder. I would regard it as quite highly modified (I’ve put a basic turbo injection kit together, which I’ve chucked on eBay) but the only thing I’ve done to the shell is drill a few holes to attach stuff. I’ve kept all the parts I’ve taken out so god forbid I had to sell it, the next person could enjoy it as it was when I bought it. The way Floyd used to be is what I would regard as ‘proper’ Floyd, the Floyd you see now is a completely different animal. 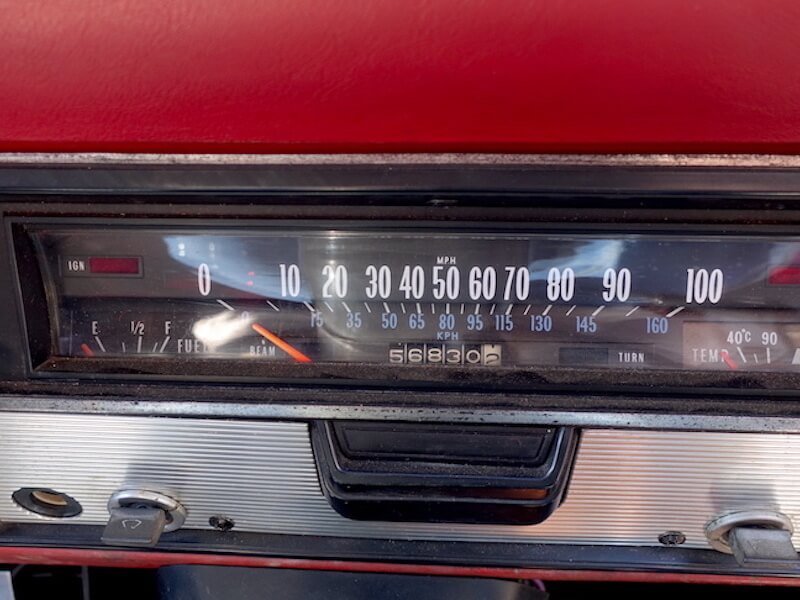 I listened to a bunch of Pink Floyd when I was working on the car to get into the era, so that’s why the name Floyd stuck. I’m not too fussed if it’s a he or a she and I don’t think it’s got a character as such, but I think cars mirror their owner because of the way they are looked after, so I’d like to say Floyd’s ambitious. If I were to review it as a functional car, it’s the best daily you could buy. It’s economical, easy to maintain, the parts are cheap, it’s comfortable, it’s got a massive boot – I’m six foot and I’ve been in there multiple times – it’s got fantastic visibility, and although it’s not got power steering it’s incredibly light. 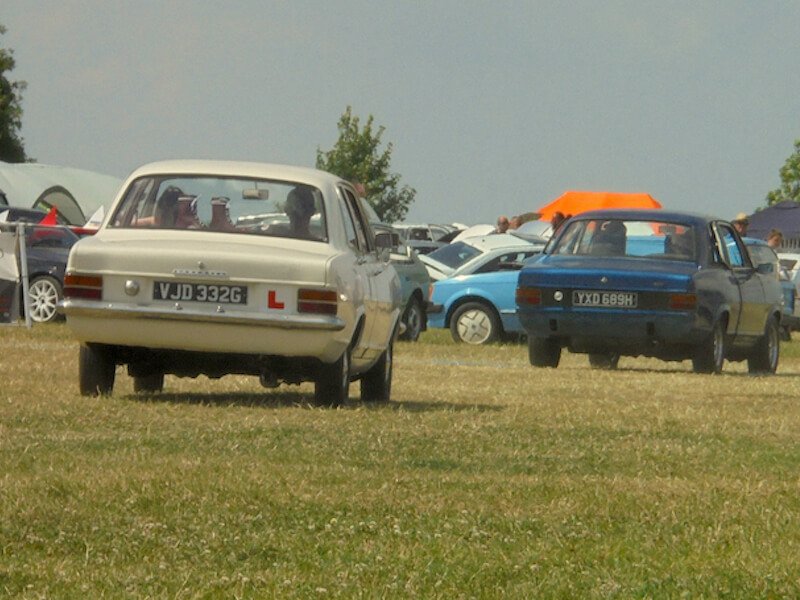 Cruising to Margate with my girlfriend for a day out at the beach is one of my top memories so far because it was our first moment of proper freedom; we were in something entirely that’s entirely mine, going where we wanted, when we wanted, in our own little bubble. In a way I’m reliving my dad’s youth because his first car was a HB and he used to take my mum down there too. 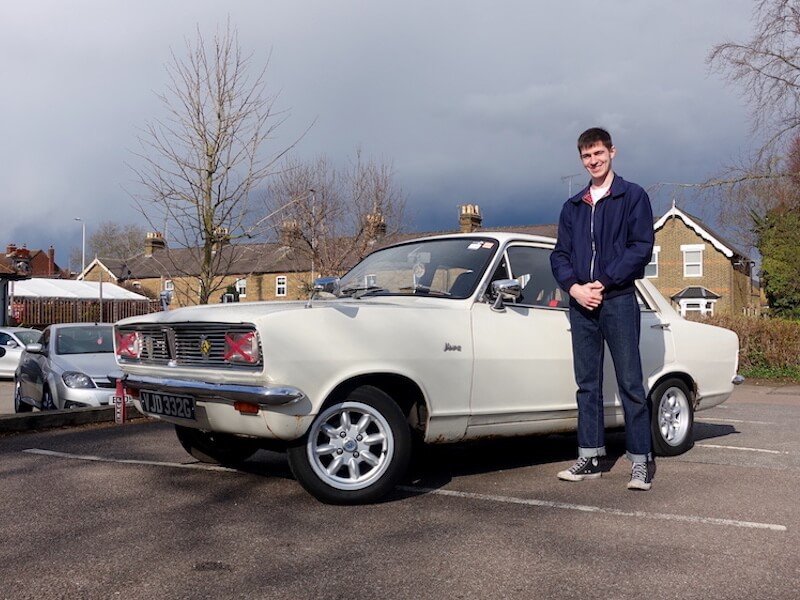 Floyd was about a year in the making and I never worked out how much it cost. I built it for myself and although the response has been very positive, it’s the thrill of driving a car, especially one you look after and you’ve got all this history with, that I enjoy and value more than anything else.”

Join Jon-Paul and Floyd on their turbocharged journey:
instagram – floyd.1968