FeaturesMe and My Car: Lewis Warren and his Renault 5

This cheap and cheerful classic is playing a part in the fight against the UK’s mental health crisis. 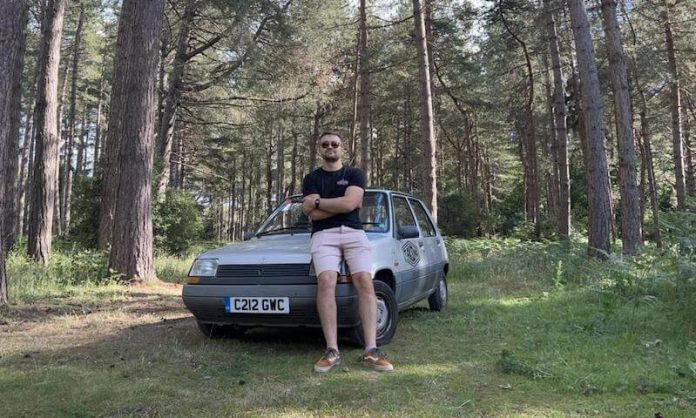 Even when it’s falling apart Lewis Warren’s bargain Renault 5 helps him see the sunny side of life. Here, he tells Charlotte Vowden how his humble hatchback has become an ambassador for driving change in the dialogue surrounding mental health and shares advice on what people can do if they’re struggling.

Popular in Britain with everyone from commuters to boy racers (even Joanna Lumley had one) the Renault 5 has always had an ability to bring people together. Now, Lewis Warren is using his to create an inclusive community of car lovers who want to combat the growing epidemic of mental health

The cars I own tend to be an outward expression of who I am, and the Renault 5 is a car that doesn’t take itself too seriously but is always willing to keep going. It’s a 1985 MK2 1.1 five door with about 47 horsepower behind it so it’s not fast but it’s reasonably practical and I don’t expect it to be anything more than it is, there’s no ego connected to it, it’s just a fun little French car that puts a massive grin on my face. 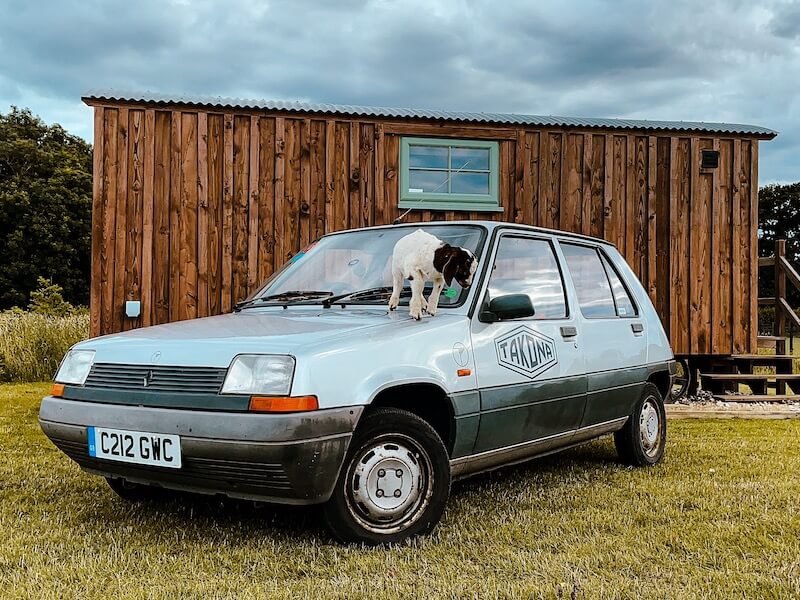 I had an old Mini when I was 19, it was my first car and I’d always fancied another classic but it had to be something cheap and cheerful that I could fix myself so anything old and British wasn’t an option. I narrowed it down to a Renault 5 or Peugeot 205, kept my ear to the ground, and then in January 2021, when I was 28, my 5 popped up. It was five hundred quid with an MoT and even though it had a lumpy idle, it was a done deal.

My other half Grace found out I’d bought it when I asked her to give me a lift to pick it up and thankfully she said it was cute. I had an absolutely hilarious drive home because I got to play with all the buttons and find out all the car’s quirks. When I was trying to adjust the rear view mirror, it came off in my hand, and when I tested the rear washer jet it blasted water backwards rather than spraying it on the window, but that didn’t matter because the window wiper didn’t actually touch the glass – the arm still doesn’t flex properly. It’s the most basic car you could have that still functions as a car that you can use. 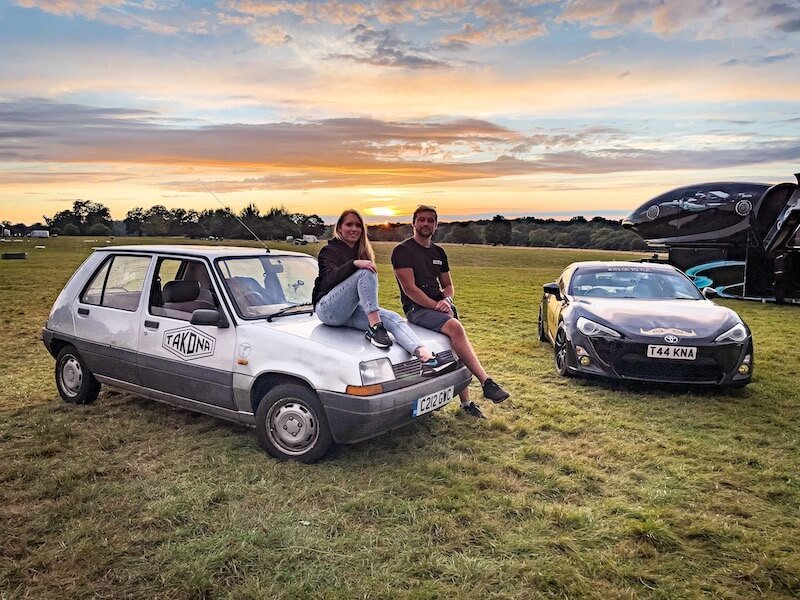 I’ve had to learn a lot about the Renault to keep it going but if I can take my time working on an old car I really appreciate the process; it’s quite a mindful activity and thankfully it has a transverse engine which is nice and easy to access. Even when it breaks down I can’t be unhappy with it for long because it seems to bring joy no matter where we go, there’s no pretentiousness because it’s not a pristine example, it’s a humble car that’s created so many opportunities for me because it acts as a bridge between me and strangers. I believe cars have the ability to connect people regardless of who they are, what they do, or what they drive, and my brand Takona is a manifestation of that.

In essence, it’s an automotive themed clothing brand that I set up to encourage mental health awareness. If you meet someone wearing a Takona t-shirt you know that a) that person is someone you can talk to about cars and b) they’re on board with the idea of it being OK to talk about mental health. To build on that foundation of creating a community I set up monthly Takona car and coffee mornings across the country to bring people together in a safe and inclusive space. Fuel is too expensive to waste driving to an event with the worry that you’re going to be judged. 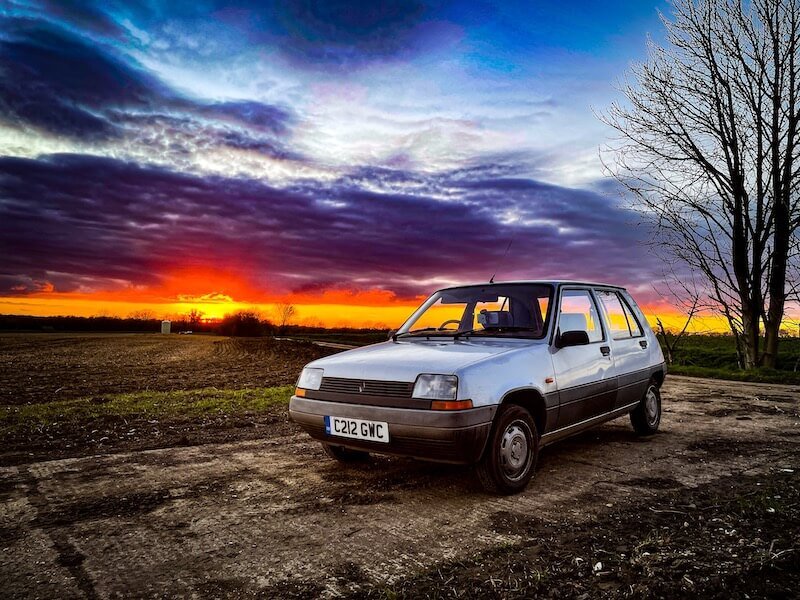 I worked in secure psychiatric hospitals for almost three years and found that you make more progress by creating a positive memory when someone opens up about feeling vulnerable, and that’s what Takona is about. Talking about mental health doesn’t need to be this big scary thing and the feedback I get about the meets is often about how people felt while they were there rather than what cars were there. I can turn up in my five hundred quid Renault and a guy can turn up in his Lamborghini Aventador SVJ and we can spend the whole morning happily chatting to one another – it’s a vibe.

I’ve not got money or a big reputation, I just really love cars, and the more I lean into that passion the more interesting places it seems to lead. I’m building a scrapbook of the Renault 5 being pictured with all kinds of people, so far I’ve got Richard Rawlings from Gas Monkey Garage (he didn’t even know what the 5 was), Shane Lynch from Boyzone, Jon Bentley, Paul Cowland, Tavarish the YouTuber, Iwan Thomas the Olympic runner and Harry Redknapp – which is wild – but it’s important to treat everyone as an equal and be respectful that celebrities, as such, want to turn up at events and be treated normally. 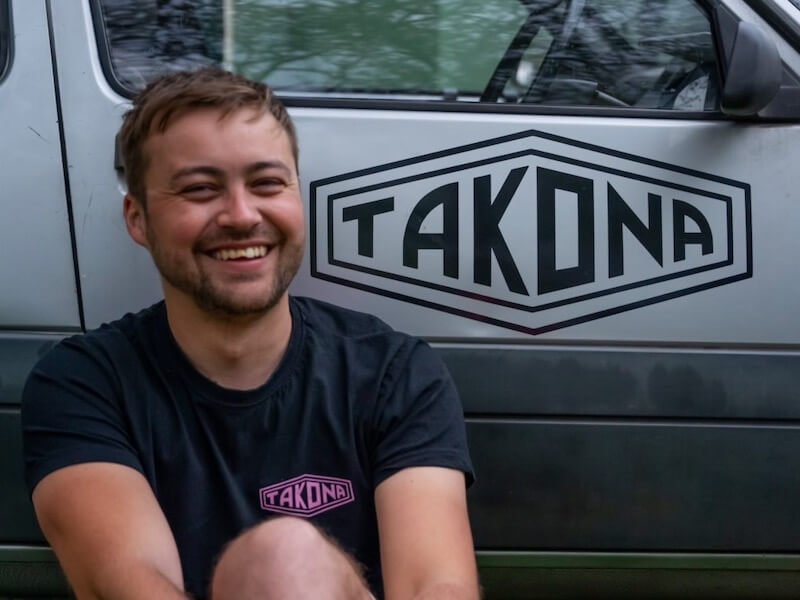 I take this approach when I’m recording the Takona podcast as well, which is how I ended up with Henry Catchpole sitting in my living room! The whole point of it is to demonstrate that conversation doesn’t have to be daunting, whether it’s with someone off the television or whether it’s about mental health. There’s never an agenda to an episode and it’s not a therapy session, I just like to chat to my guests and see what road we go down, it’s similar to the I love you, man series at Caffeine and Machine. I went to one with Mike Brewer and my perspective of him changed entirely because I was able to see him as a person rather than that geezer off Wheeler Dealers. He’s a genuine, sound guy who has gone through a lot and is quite grounded in his reality. I hope the podcast enables other people to be seen in that way too and encourages people to talk about their mental health.

Me and My Car: Lewis Warren and his Renault 5
1 of 11
January can difficult, there’s always a spike in suicide rates, and it’s important to be aware that how you’re feeling can be attributed to external factors like Christmas, which involves lots of expectation and financial pressure, as well as things like seasonal affective disorder and a quieter social life. We’re all expected to have these ideas of ‘new year, new me’ and New Years resolutions, but they don’t work, and there’s a lot of research that supports that.

In my view, if you set big targets you will probably fail and feel worse than baseline because it will reinforce the negative perception you have of yourself. If you set small incremental goals, you’ll probably achieve those and feel more motivated – it’s not about how big the ladder is, it’s how many rungs are on the ladder to get to the top. Try to see the new year as a way to take stock of where you are, what you enjoyed last year and appreciate the things you’ve got going on.

I think it’s a very British thing to focus on the negative, so try and break that habit by adopting a positive bias, and avoid judging yourself on other people’s metrics – particularly if you spend a lot of time on social media. For anyone that is struggling the Takona website has a dedicated page for mental health support where you can find links to organisations who have the resources to help.
If I’m honest, I don’t really know what I’m doing most of the time, I just have a go and worse case scenario I’ll learn something. The way I drive my little Renault reflects that, I’ll see how fast we can go around a corner, and when it’s understeering I’ll back off and we’ll know how far to push next time.
Not long after I got the Renault 5 I decided to record myself doing a 0-60mph test on a straight stretch of road. While I was wringing the car’s neck I got really emotional talking about cars and what they mean but later found out the camera hadn’t recorded any of it. I was so annoyed, but on reflection it was a lesson because it’s good to just be present in a moment. If you’re feeling rubbish, go for a drive and experience it for what it is. Nobody gets out alive so you might as well enjoy the journey.”
Find more info:
Takona
Join the club:
Renault Owners Club
Want to share the story of your car? Get in touch by email at:
Hello@mikebrewermotoring.com