FeaturesMe and My Car: Niamh Smith and her Ford Fairlane 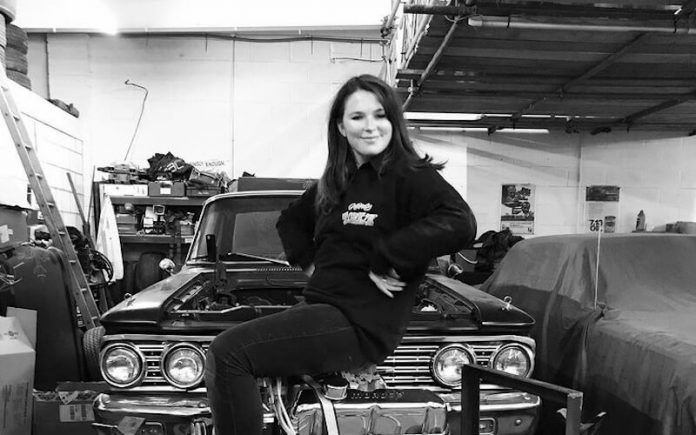 Inspired by pioneering women of speed, Niamh Smith has hopped-up her sixties Ford Fairlane so that she can fly down the drag strip, but getting it ready for lift off was far from plain sailing. Here, she tells Charlotte Vowden why it was worth it.

Plucked from the production line in 1962 and delivered to a dealership in New Mexico, Niamh Smith’s Ford Fairlane 500 started life as a standard saloon. Sixty years later she’s transformed it into a street-legal custom car.

“The Fairlane was always going to become a race car with me as its owner. I’m a big daydreamer and I’m obsessed with every female involved in motorsport, they all have such inspiring stories and have helped us get to where we are today. Shirley Muldowney had to fight to be allowed to race at all in the fifties and became the first woman to receive a National Hot Rod Association (NHRA) Top Fuel License. She paved way for another Shirley, Shirley Shahan, to race throughout the sixties and seventies, which she did with children and a career. I’ve crewed for my boyfriend Jake, a hot rodder, for about four years, but when we got the Ford I decided it was my turn to go racing. 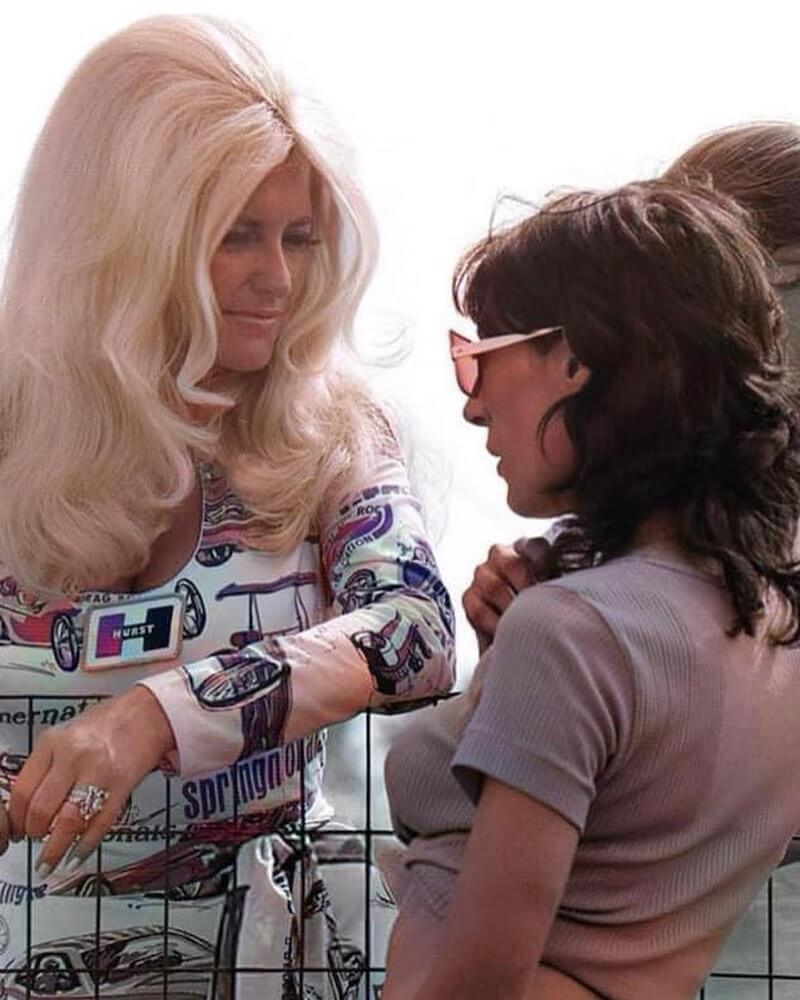 If you were to get a kid to draw a car, the Fairlane is exactly what they’d draw. It’s a very boxy saloon, but with nice paint, nice wheels and a bit of signwriting I think we’ve really brought it out of its shell. Authenticity is such an important factor when it comes to classic race cars, so it was a no-brainer to have the Fairlane signwritten by a traditional signwriter. With the growing popularity of decals it’s a skill that’s started to wane, but part of owning a classic car is embracing the tools and techniques that would’ve been used originally. A friend of ours, Craig Ainge, is one of the few signwriters left that does it the old school way, by hand. He’s got such an eye for it, and knows all the little tricks and finishing touches, so we trust him with anything. 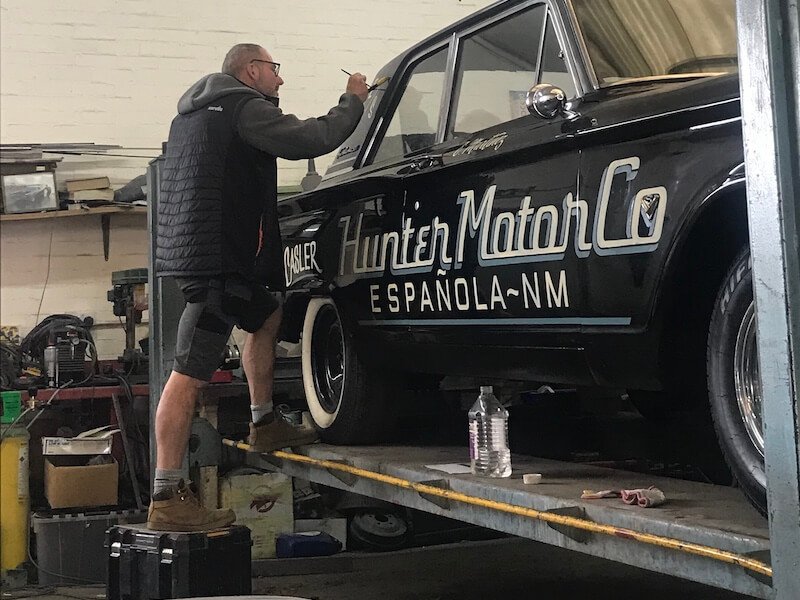 The Ford originally came from a dealership in Espanola, New Mexico, called Hunter Motor Co and was bought by a guy called Epimenio Martinez (who named her Bobby with a ‘y’ but I prefer it with an ‘ie’) so we’ve got those details painted on the door as a nod to the car’s past. I’ve tried to find Epimenio, but haven’t had any luck, but we did meet the guy who owned her when she was first imported into the UK; he did her up like a Teddy Boy car with blue flames and leopard print interiors.

I’ve never wanted a modern car and everyone at school thought I was strange for owning a Morris Minor but I think classic cars give you even more of an identity; they teach you that being different and standing out is kind of cool, even if it can be hard work. 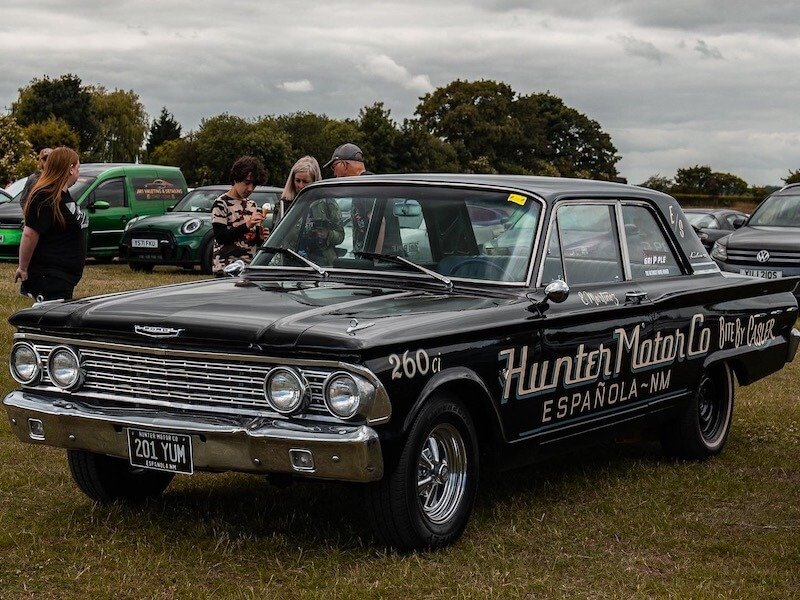 The Fairlane is the first, and probably last Ford we will ever rebuild; it was such a big drama and we weren’t even looking for it, it just sort of happened. Jake and I owned an Austin A55 Cambridge that we’d done up as a rally car and would have taken us to the end of the earth, but we wanted to trade up to a V8. We’re really into Chryslers, but the Fairlane was cheap and had manual transmission, so we sold the Austin and bought it. We knew the Ford wasn’t going to be easy to work on, and the parts wouldn’t be easy to find, but we saw its potential – despite its smashed back screen, horrible matte black paint and loud, obnoxious exhaust. It was going to be a car to cruise about in, but one thing led to another.

I think we could have done more research and planning, but rebuilding the Fairlane turned into an even bigger, more stressful rollercoaster than we’d expected. There’s no continuity between early and late Ford engines, even the bolt pattern on the bell housing is different, and we had to sack off the replacement engine we’d bought because it wouldn’t fit. We resorted to Plan A, which was to rebuild the one we bought her with. 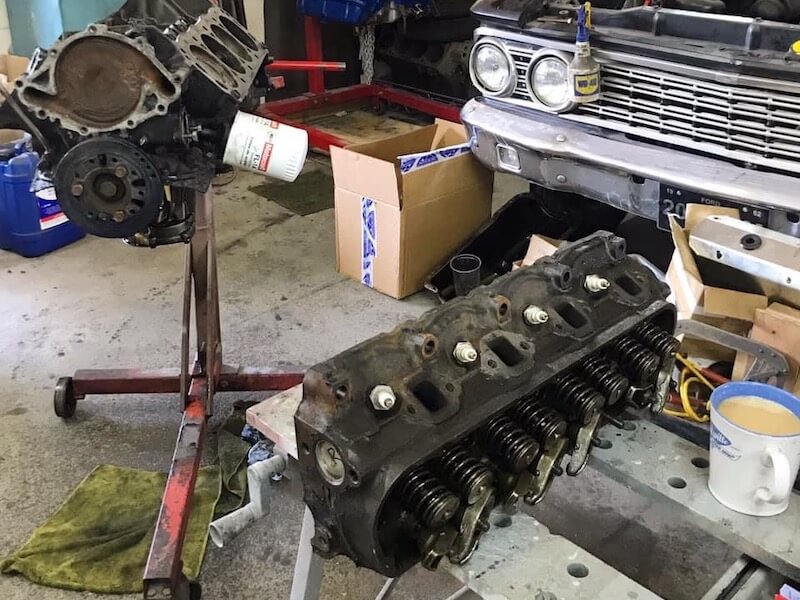 The more we stripped the Fairlane apart, the more there was to do; she had a leaky rear main oil seal, a bent push rod, the cylinder heads were cracked, she needed new headers, new carbs and a new gearbox. The up side is that because we’ve had it completely to bits and put it back together again she’s not an unknown. If something goes wrong, it’s on us, and we know its set up.

I’d call Jake and I YouTube mechanics, and we’ve learnt a lot on the job with help from his dad. After work and on the weekends, we’d get fish and chips, go up to the unit and hammer away at it for as long as we could. We had a bit of a mad dash to get it done in time for my first race but giving yourself a deadline can be good because it keeps you focused, rather than stress you just get on with it, and when things got tough with Bobbie, I motivated myself by imagining sitting in her at the start line.

She was finished two nights before the race, which didn’t give us much time to run her in, but she was fine on the 100 mile journey to Santa Pod. My best time was 15.1 seconds at more than 90mph and as the day went on I felt more and more amazing. I had been worried that I’d have to wrestle with the steering because one hand was always on the shifter, but it was easy, and I found every gear by the end of the day. With my helmet on, it was like being in a bubble, but I used my senses a lot; I concentrated on the REV counter to get her ready to launch at around 3000 and could tell when she needed shifting by the vibrations I felt up my arm from the gearstick.

Bobbie is sixty years old and it’s pretty incredible to see what she can do. Hot air usually makes cars run a bit slower, so trying to get a PB in glorious sunshine can be tricky, but we have a few ideas about what we can do to get a 14 seconds out of her which includes putting a scoop on the bonnet to improve air flow into the carbs. 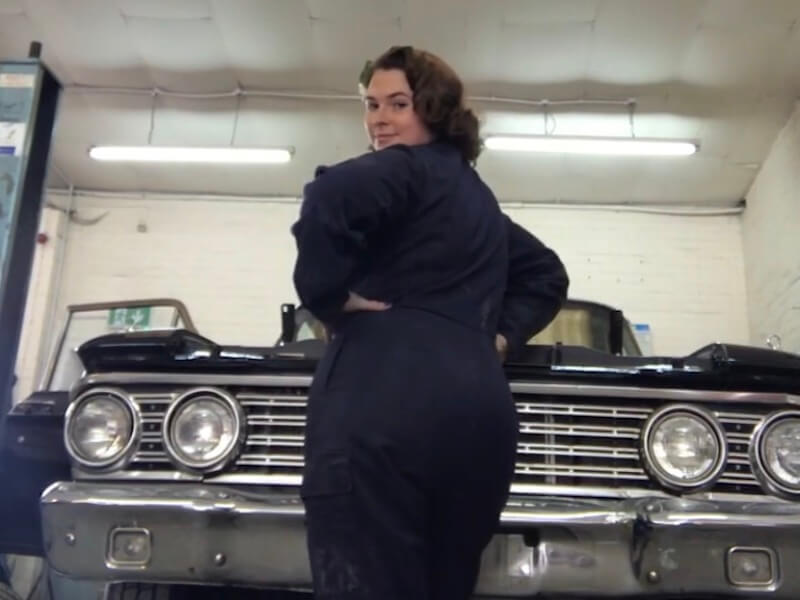 In America drag racing involves big money so it’s really competitive but over here it’s more about enthusiastic like-minded people coming together. I drag race in the UK Nostalgia Super Stock Association, which is effectively nostalgic stock-style drag cars made before 1980 with V8 engines. If you want to try drag racing, don’t expect to run tens straight away, have fun with it and enjoy the journey.

No matter what you are doing to a car there’s probably someone else that had already done it, but the amount of help we had from other racers during the build was phenomenal. We were given parts, advice and hands, it’s the best family you could ask for and you can’t beat the atmosphere in the pits; it’s always a hive of activity with people working on cars, laughing, joking and sometimes amicably trash talking. After racing finishes for the day, that’s when the pits really come alive, there’s a party around every corner and some of the best evenings I’ve had have been at the drag strip. 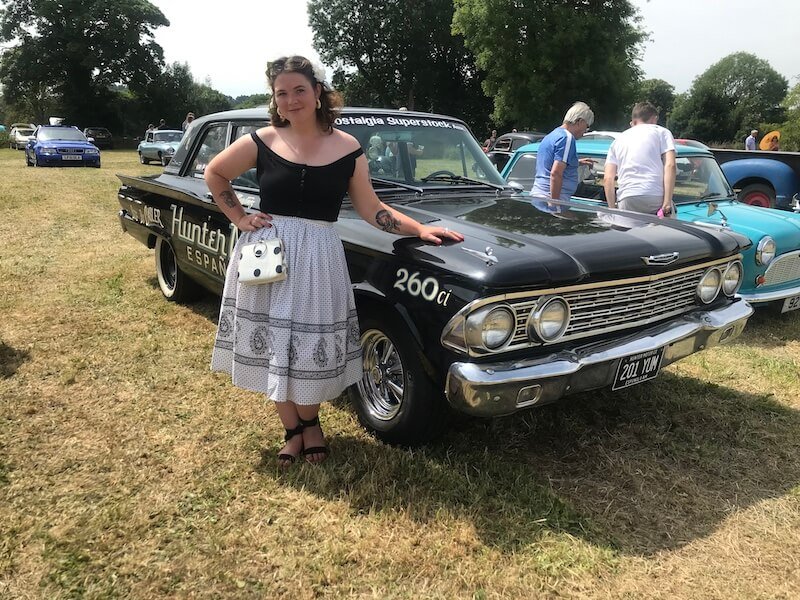 I’ve dressed in vintage clothes since my early teens and having an old car is the cherry that can top a look. One of my biggest fashion icons is Linda Vaughn, also known as Miss Hurst Golden Shifter, who was a promo girl for Hurst Performance in the sixties and seventies. She and her ‘Hurstettes’ wore the most amazing outfits at drag and circuit racing events, they were total style icons in their mini skirts and gogo boots with big beehive hair. About a year ago I found some original 1974 Sears NHRA bedsheets on eBay and had the incredibly talented Rasha Swais use it to reproduce a dress and booty shorts that Linda wore, which was most likely made by her mum who created a lot of the Hurst Girl outfits. The fabric isn’t the exact pattern as Linda’s but it was the closest I could get without shelling out a small fortune and I love it. 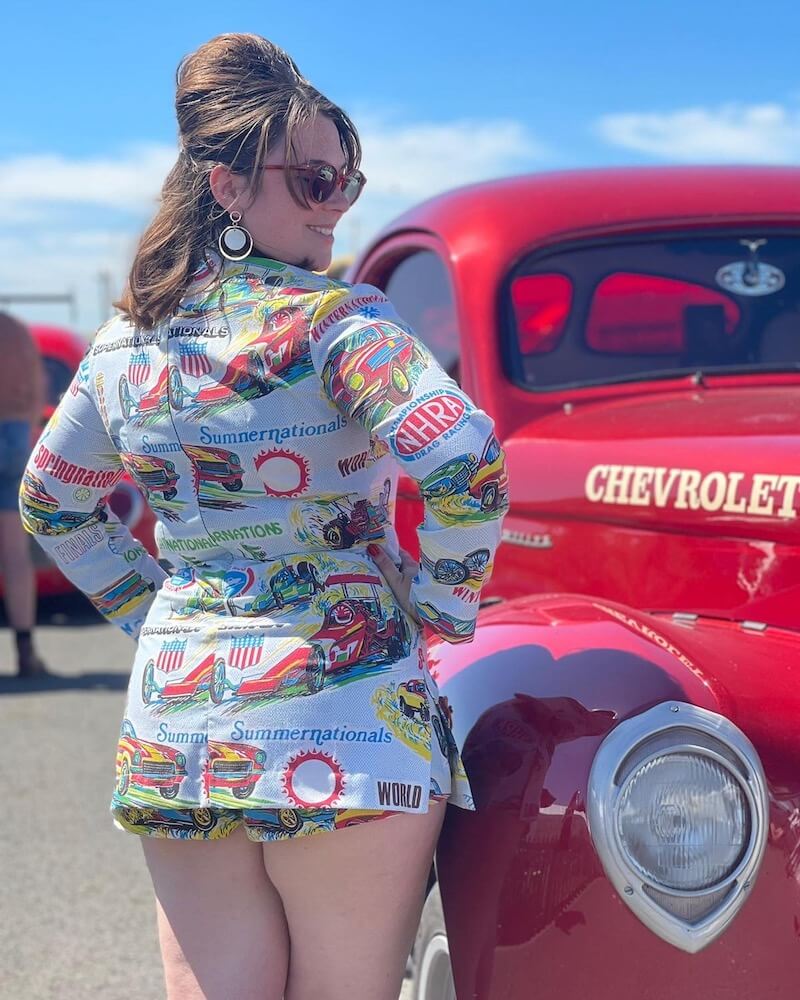 What sets classic American cars apart from others is how interesting and technologically advanced they were for their time. The designers were constantly moving the goalposts; electric windows, electric seats and cruise control were all popular extras on cars even in the fifties. A lot of people think I’m purely into hot rods and American muscle cars but I like a bit of everything, as long as it’s a bit quirky, and I’ll always have an English car itch to scratch, that’s why I’ve got a 1972 MGB GT. My love of classic cars probably comes from my grandad, who passed away a couple of months ago, but in his memory my intention is to get his 1926 Alvis up and running again so that I can take part in Vintage Sports Car Club rallies like he did. 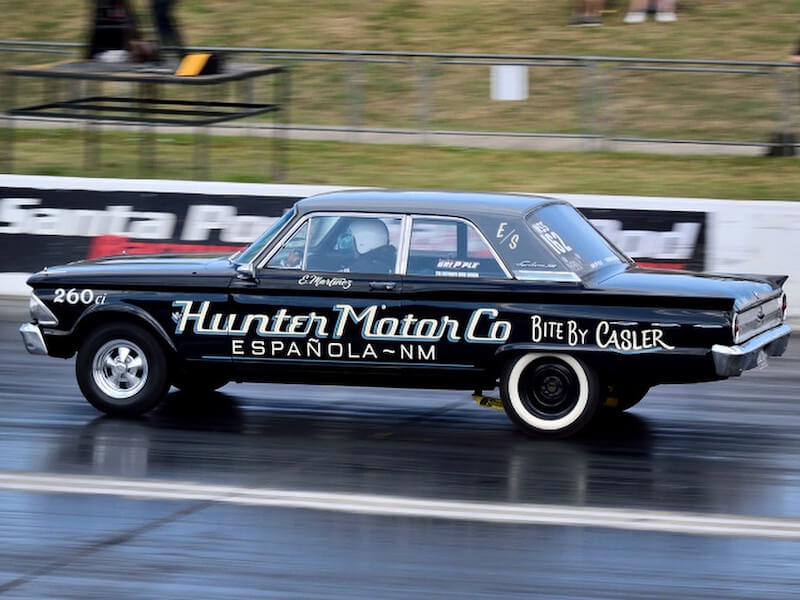 Bobbie can be a bit twitchy on the road and I’ve discovered she likes to go sideways in the rain, but I see her as a loyal car because of all the trials and tribulations we’ve had; she’s taken everything we’ve thrown at her and rolled with it.

I think Shirley Muldowney would be really happy to know that she’s help to make it possible for women like me to race in a sport that really doesn’t need to be defined by gender! The Fairlane would probably remind her of her first race car, a Corvette which was also a street-strip car.”

Our very own Wheeler Dealer Mike Brewer visited Classic Car Auctions this week to take a look at the 140 cars on offer at...

Mike loves his ‘80s classics, so a brilliant drop-top Escort was the perfect way to celebrate the return of our favourite show. What would...
- Advertisement -