FeaturesMe and My Car: Shelby Webster and her Ford Popular 100E

I’m named after a Mustang, but I prefer the Ford Pop. 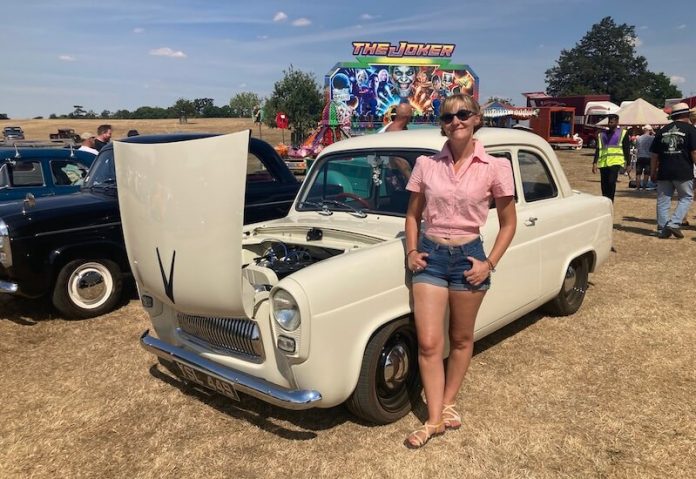 I made mine a sleeper: Shelby Webster’s Ford Popular 100E is a masterpiece of understated engineering. Here, she tells Charlotte Vowden what it takes to upgrade a classic sympathetically and shares insight on the dynamics of tackling the project with her dad.

Made in Britain between 1953 and 1962, the Ford Popular, often called the Ford Pop, replaced the sit-up-and-beg style Anglia and Prefect. Its no frills design made it an ideal pop to the shops kind of family car, but when this 1960 model was bought by the daughter of a legendary engineer in the car modification scene, it became destined for greater things…

“I relax when it’s just me in the 100E, I drive it better, and faster, because there’s no pressure. I have a tendency to pre-empt my passengers picking me up on things I do, or don’t do, which puts me on edge, so when it’s just me, the car and the road ahead I really relax into it, but my dad, Jon, is definitely my security blanket. He used to follow me to every show I took the Pop to in his Ford F-100 truck so if I broke down he’d be behind me. It wasn’t until I did my first show without him that I actually broke down; at night, on an uphill blind bend in the countryside! I’ve got breakdown cover but I was straight on the phone to him, I don’t trust anyone else with my car. 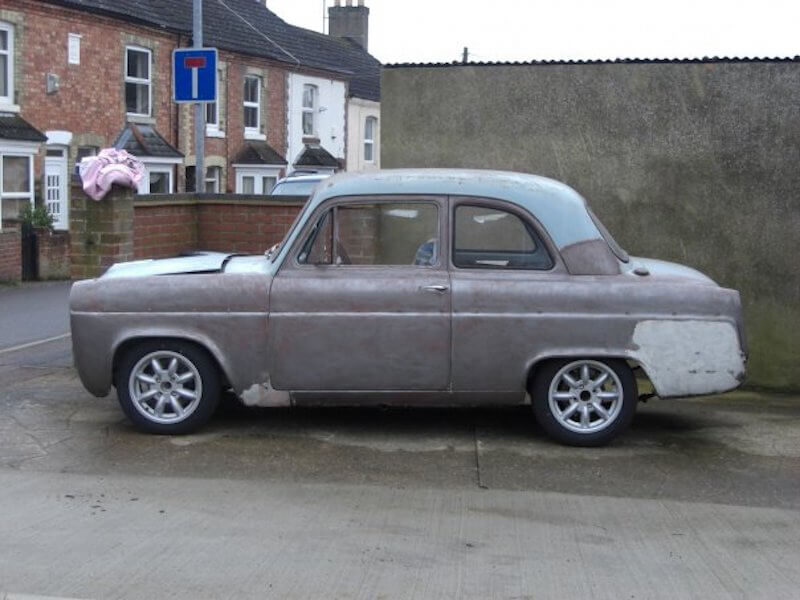 I’m a Ford girl at heart and I’ve always had a thing for Pops so when this solid 1960 Ford Popular 100E came up for 800 quid in 2008, I had to get it. I was 19 and the plan was to keep it original but it was horrible to drive and it died at the end of the road when I first took it out so I decided to turn it into a sleeper car by upgrading the Ford Sidevalve engine and three-speed gearbox, then refresh everything else.

My dad, a fabricator and engineer who builds cars from scratch, has been part of the drag racing scene for 30-odd years and has worked on land-speed record-breaking vehicles, including The Flying Kestrel, which is a great example of a car that’s got to look as original as possible but perform like a modern one. I’ve used his knowledge to realise the vision I had for making my Ford Popular a usable street car that I could potentially take up the track but I was adamant that dad wasn’t to do it all for me. 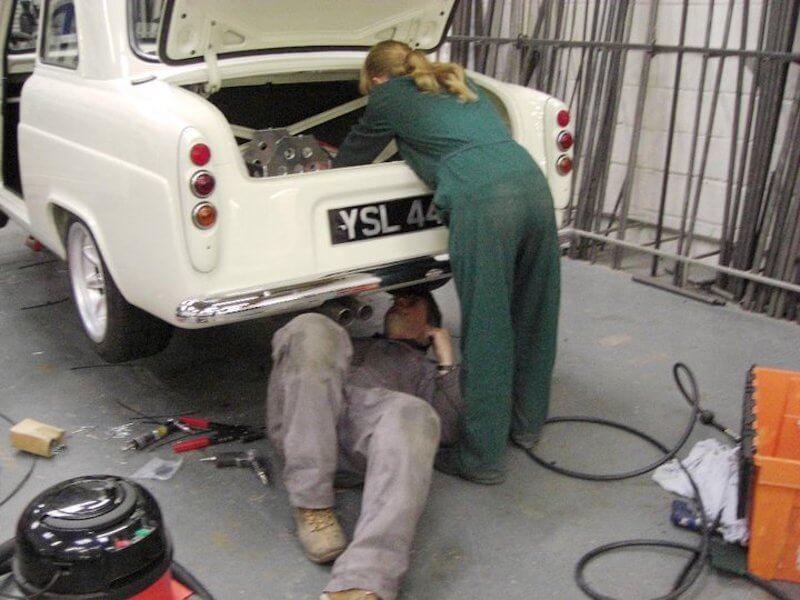 I wanted to learn and do it with his help, which meant doing a lot of the dirty work myself. Stripping the underseal was disgusting and taking the car down to bare metal using Nitromors was really hard but my dad said ‘if you’re going to do the good stuff, you’ve got to do the bad stuff,’ and as I started to see the car develop the excitement took over.

I’ve been brought up around old school American muscle cars (the Mustang was the dream car in my household, which is why I’m named after one) and I love the sound of a V8 but didn’t want to shoehorn one into the engine bay so opted for Mikuni Bike Carbs and a custom exhaust, which dad fabricated, to give it that little bit of warble. To get the Type 9 five-speed gearbox and transmission in, we did have to cut a bit out of the bulkhead and adjust the tunnel, but it doesn’t look out of place. 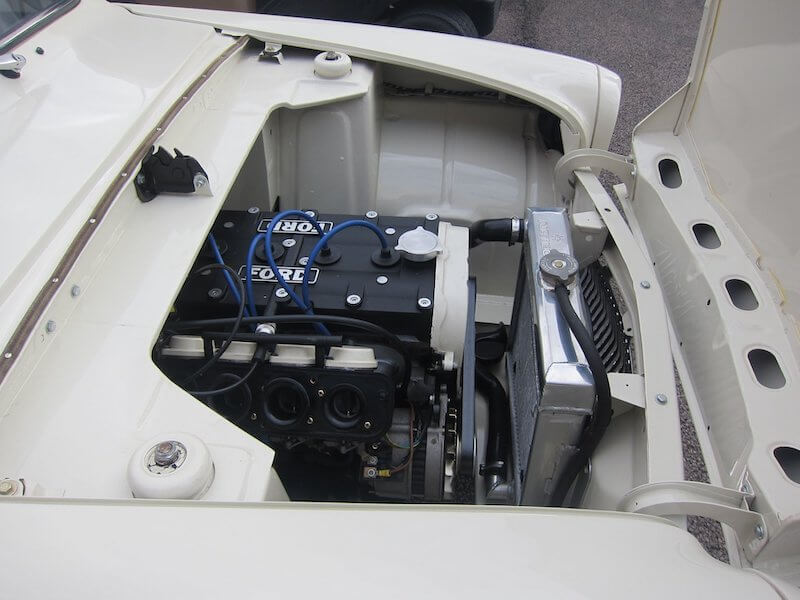 The 2.0 litre Zetec came out of a Mondeo and so that it’s in keeping with its era, I got a BDA rocker cover and matching sump from Retro Ford. I think the E’s previous top speed is around 50mph, and although its new one is yet to be determined, with 180bhp behind its approximate 800lb weight, it accelerates well and goes pretty quick. The Escort suspension and disc brakes all round make it handle like a rally car so when dad’s driving she corners on three wheels – which are often a topic of conversation. They’re 15-inch and people ask how I’ve managed to fit them in without giving the E bubble arches or bringing the suspension arms into the engine bay, but it’s all down to dad’s clever engineering. 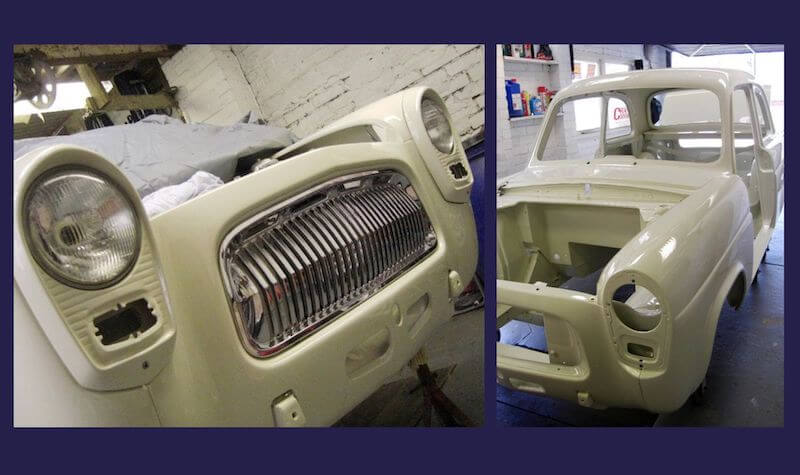 He has his own business and is used to working by himself, or with people who know what they’re doing, so building the E has been a learning curve for both of us. He has a very particular way of doing things, but we are very similar and he got used to scaling things right back as he was explaining how things worked so I could get a clear understanding of it all. The hardest part of the process was discovering the rear quarter had to be replaced; we found layer upon layer of filler where it must have had a knock. Hammering out a new piece of metal using a roller and beading machine was really time consuming and I felt nervous as we welded it into the body (another new skill dad taught me) because it popped in and out of shape, but the finished result was perfect. 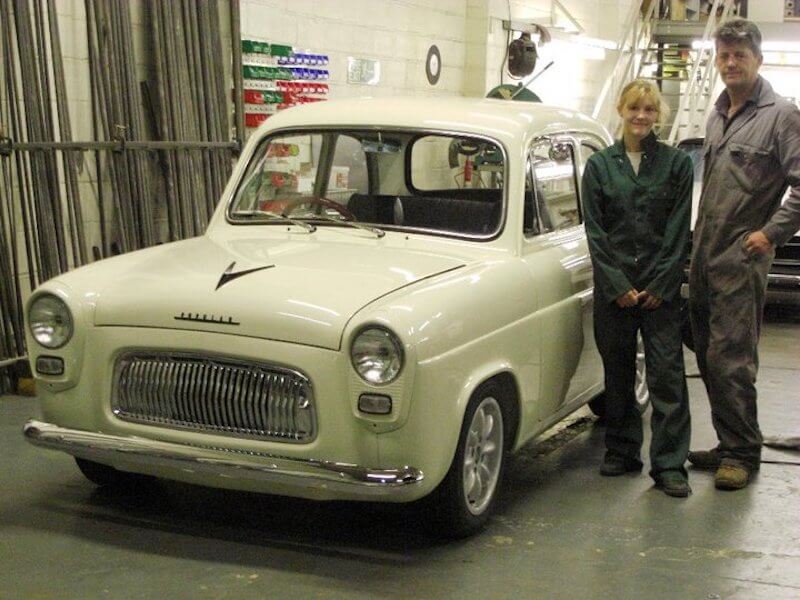 I was inspired to have the 100E re-sprayed from baby blue to BMW Pepper White after I saw the colour on an old Mini. It shows the car’s lines really nicely and its tone changes in different light; sometimes it looks really creamy but it hasn’t got that yellow tone that some old white paints can have. A job like that has to be done under clinical conditions so we got a friend of ours, painter Darren Scannell who is based in Essex and really knows old school Fords, to do it.

Apart from the customised dash and wooden steering wheel, the interior is mostly original, but that was blue too, so I had the back seat recovered in black leather look vinyl and picked some retro looking Cobra bucket seats for the front. To tie it all together I’ve got all steel wheels with a bit of black on the hubcap.

I suffer from hypermobility and the pain usually starts in my shoulder so washing and polishing the car can trigger it. I never clean my daily, I save my energy for the E, but I’ll pay for it for a few days afterwards, which is one of the reasons why it doesn’t go out in the rain or during winter. I also struggle with the E’s steering because it’s so heavy until you get some momentum, a three point turn is like a three hundred point turn, so power steering is an option I’m looking at.

Generally, I encounter two groups of people, there are those that say ‘oh wow, I love what you’ve done with it’ because I’m keeping the E going and making it practical, and then I get the ‘why have you done that?’ gang. I think people should be able to modify their cars in a way that makes them work for them, it’s like art, it’s down to individual taste. If owning a classic is not about having fun, then what is it about… other than hard work! 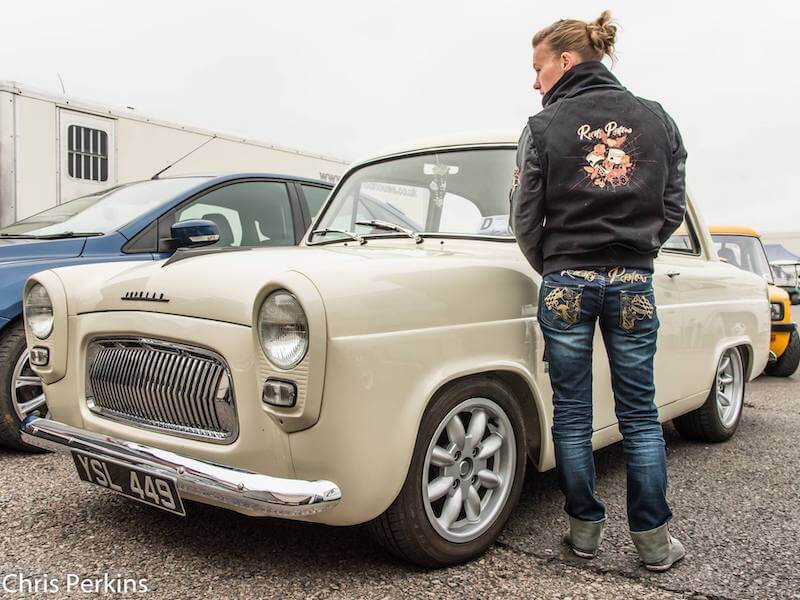 When you’ve rebuilt a car, teething problems are par for the course because it takes a few miles for everything to bed in but now I know how the car should sound and feel, I instantly know if something’s wrong. I do have a fear of breaking it, but I am planning to take it down the drag strip and see what it will do. Dad says ‘enjoy it and if you break it we’ll fix it’ but I’ve watched him have accidents racing cars and bikes, it’s awful. It doesn’t take a lot for things to go wrong on the quarter mile because cars can be quite skittish and you can easily over-correct and hit the wall – it all happens so quickly. I’m also quite shy and a lot of people know my dad, which adds the pressure of expectation.

A big part of my job as a K9 hydrotherapist is to treat dogs with arthritis, build their strength up and help them move better as they get older which I guess could have something to do with why I like to keep old cars going! In all, it took about three years to get the E to where I wanted it because I worked on it around university. Dad really knows his stuff and mum had to stop him from going in the garage and getting bits done as a surprise; it was hard for him to rein it in but I really appreciate the fact that he did. It means so much to me that we did it together and I spent that extra time with him, I’m very sentimental about it. 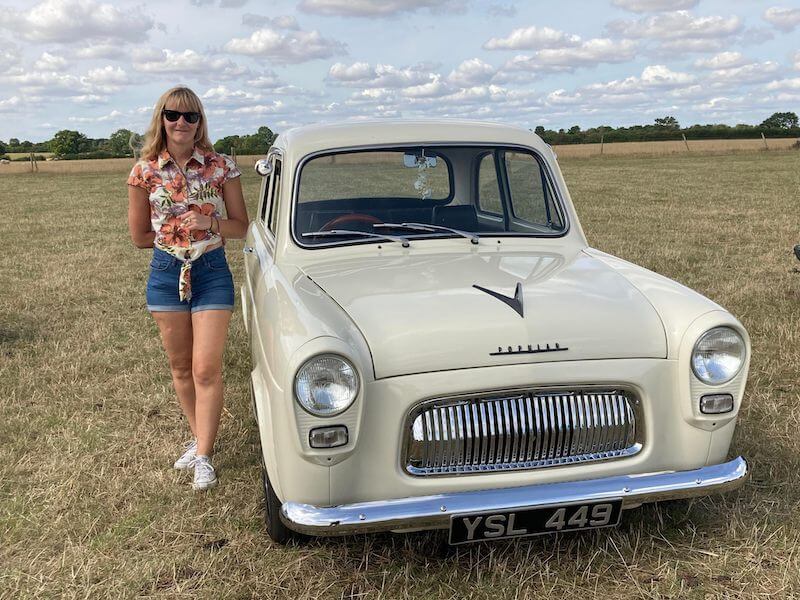 I called the Ford Popular 100E Daisy because I love those too. She’s all curves and swooping lines, but I’d describe her as subtle and that’s thanks to dad. I’ve got a long list of cars that I want and he suggested I should sell Daisy so I can move on to the next one, but for me, that’s simply not an option.”

Join the club:
Ford100e.com
Want to share the story of your car? Get in touch by email at:
Hello@mikebrewermotoring.com