FeaturesMe and my car: Tom Mains-Brake and his 1992 Nissan Figaro

Growing up with Gurt the Nissan Figaro has given Tom confidence 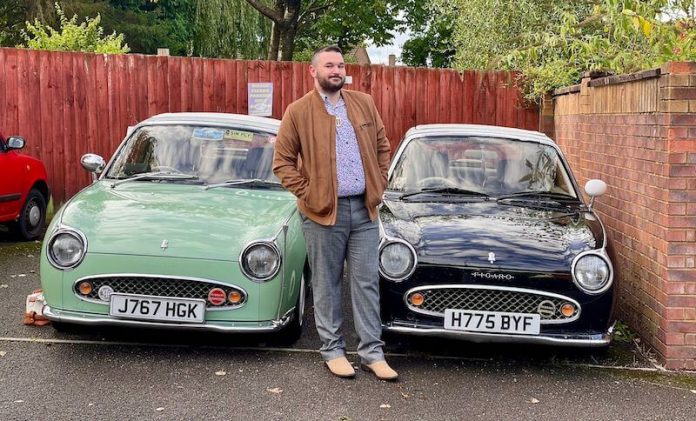 After seeing his mum go through cancer, Nissan Figaro owner Tom Mains-Brake tells MBM contributor Charlotte Vowden why life is too short to drive something you don’t love.

When the Nissan Figaro was revealed at the 1989 Tokyo motor show it was an instant hit. With the retro styling of a sixties classic, but with all the benefits of modern technical specs, it was only offered in four body colours to represent the seasons. In original Emerald Green, which represents spring, Gurt the Nissan Figaro isn’t just a fair-weather car. From a TV appearance to clocking up 20,000 miles a year, owner Tom Mains-Brake tells Charlotte Vowden why he doesn’t wait for the sunshine to get out in his Fig.

“When I turned up at school and everyone was saying ‘who’s in that car?’ I stepped out like: “Yeah, look at me!”. It was amazing – before Gurt we had a Skoda Fabia that my mum absolutely hated – but I haven’t always felt able to walk into a room with my head held high. Looking back, I can see how much I’ve grown as a person with Gurt.

It all started when I was nine. I was watching a TV show called The Sarah Jane Adventures and the main character had a green Nissan Figaro. From the second I saw it I was like, I need one. I remember pausing the TV, going up to my mum and repeatedly saying: “Can we get one? Can we get one?”

She didn’t know a lot about cars so did some research online and found out that Figaro’s tend to get rust in the roof gutters and wheel arches. The first few we saw weren’t in good enough condition and it wasn’t until a few years later that we found Gurt, who was named randomly by mum when we were struggling to get up a hill.

Mum had always wanted a black Figaro, but the instant she sat in Gurt she felt right at home, so we ended up getting one in green. Driving it back for the first time was a big moment for her because she’d actually gone out and bought her, almost, dream car. I remember her smiling. I also remember saying to her: “When you die can I have the car?” I had absolutely no filter at that age.

About a year before I started learning to drive we got another Figaro – which was also green. It was going to be mine, but then mum got really ill with cancer. She’d always said she’d never paint Gurt and I wanted to do something nice for her so we did a car swap and I sent the new Figaro off to be re-sprayed black. Mum was shocked when she saw it; after all the stuff that she went through it gave her a reason to get out and about again.

I had one driving lesson in a modern car and didn’t get on with it, so mum and dad taught me in Gurt, which I think has made me a better driver. When I passed my test and got handed the keys it was like, oh, I’m an adult. I’m 20 now and have been driving her every day for just over three years.

Without sounding smug, I focus more than friends who drive newer cars – they’re more worried about what all the gadgets are doing – and when you’ve got no ABS you have to really know how to control a car. It can be a bit worrying when it’s wet, and I’m always grateful to get home, I think to myself: “We didn’t spin out today, that’s good.”

When you’ve got an old car it’s always in the back of your mind to do everything you can to protect it and my biggest fear is getting into an accident that writes Gurt off. When I was 18, I hit a pothole on a roundabout and she span about four times. I thought that’s it, that’s the end of the car, but thankfully we came to a stop a couple of feet from a barrier. It would be absolutely heartbreaking if the worst were to happen, but I’d go out and get another Figaro. I had a modern hire car when Gurt’s head gasket was being done and it was horrible.

A car says a lot about the person who drives it, especially when it comes to how clean they are – I wash and polish Gurt three or four times a week. When I drove her from Southampton, where I live, to Warwickshire for the Figaro Owners’ Club 30th anniversary weekend there was no time to clean her and she was covered in flies. I thought “oh no” but when she was awarded ‘Most Daily Driven’ it seemed quite fitting. We do 20,000 miles a year together. 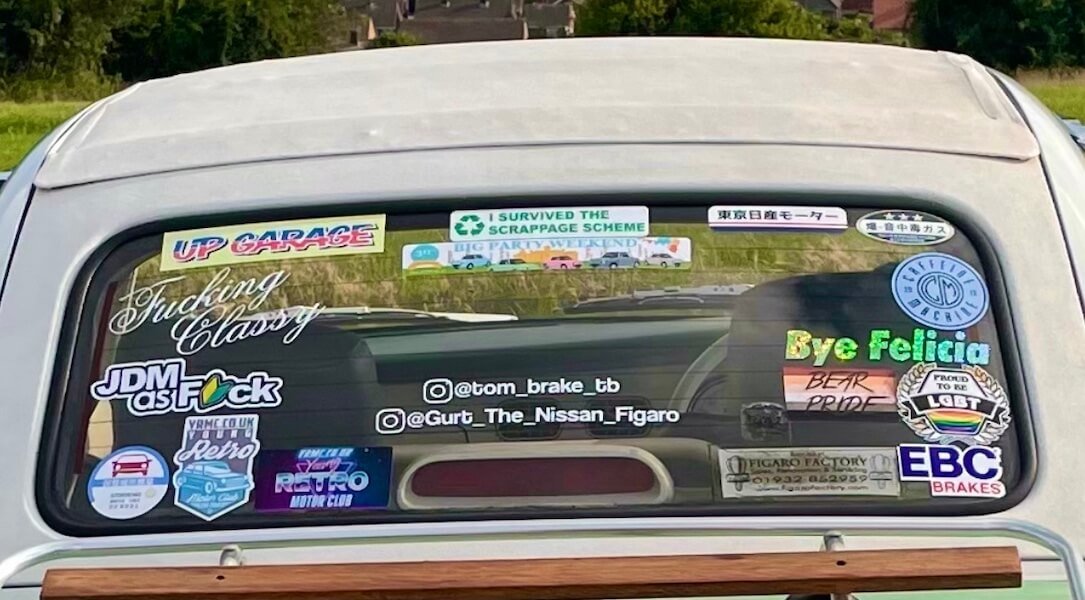 It was at that event I noticed that Gurt was the only one with loads and loads of stickers in her window – most people just keep it to their car’s name – and people recognised her because of it. Each sticker represents something that’s important to me, especially Gay Pride, and the funny ones that say things like: “I survived the scrappage scheme”.

People can be really judgemental in the car scene, but The Young Retro Motor Club is great for anyone with a classic car that wants to feel included because they’ve created an environment where it’s all about embracing different vibes and I’ve made some great friends through it.

No matter what you drive it’s not going to be to everyone’s taste so if you’re worried, just go for it – be yourself! Walk into that room, walk into that car show, say “hey!”, be cheerful and just go with it. People will either like you, or they won’t, but either way you’ve tried and that’s the best thing you can do. 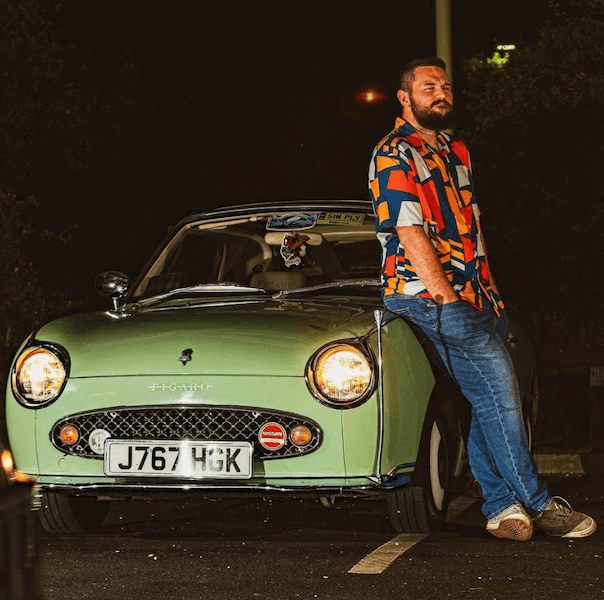 Before I went to car shows or joined any groups I was a really shy person. I never used to be the person to speak first and I didn’t go to anything on my own because I worried about starting conversations, but cars give you something in common to chat about. Gurt’s enabled me to connect with other people and myself, and has given me confidence I never thought I’d have. When you own a car that turns heads, wherever you go you’re going to stand out like a sore thumb so you learn to stop worrying and embrace being different. Over the last few years I’ve found myself being just her – really whacky and sometimes annoying!

I dread to think what would have happened if I didn’t have Gurt – I probably would have ended up with a KA  – and I also wouldn’t have had so many amazing experiences. Recently, I was invited to take part in a BBC dating show that paired people based on the cars they drive. I said I liked cars that were “old, funky, weird and that nobody else has” and they matched me with someone who had a 90s BMW which is not really my style. 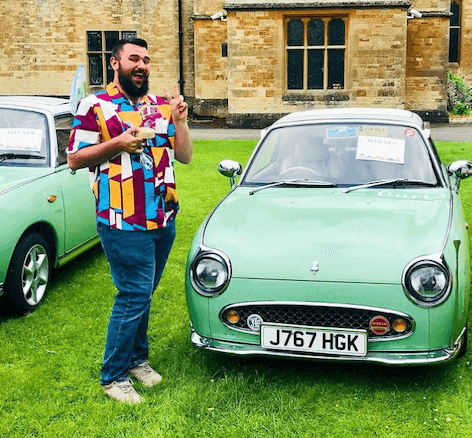 The whole thing was really out of my comfort zone; the date took place in the back of a super car while being ragged about on the Top Gear test track. It was quite awkward, especially with the cameras, and even though my date and I had fun, we friend zoned each other. Gurt was only on the TV for a few seconds (my main reason for agreeing to do it) but I was still like ooh, watch out, someone’s stealing the limelight!

I think its important to be honest in life and on social media. I see glamorous shots of old cars on Instagram all the time but that’s not what classic motoring is all about. The reality is that it comes with risks because like any machines they wear out and go wrong. The best thing for people who are thinking about getting an old car to do is to find out what they need to prepare for such as common faults, where its susceptible to rust, and parts availability, and then? Just go for it. Why dream about something if you’ve got the ability to go and get it? If the “what if?” things happen, you can fix it. No regrets. 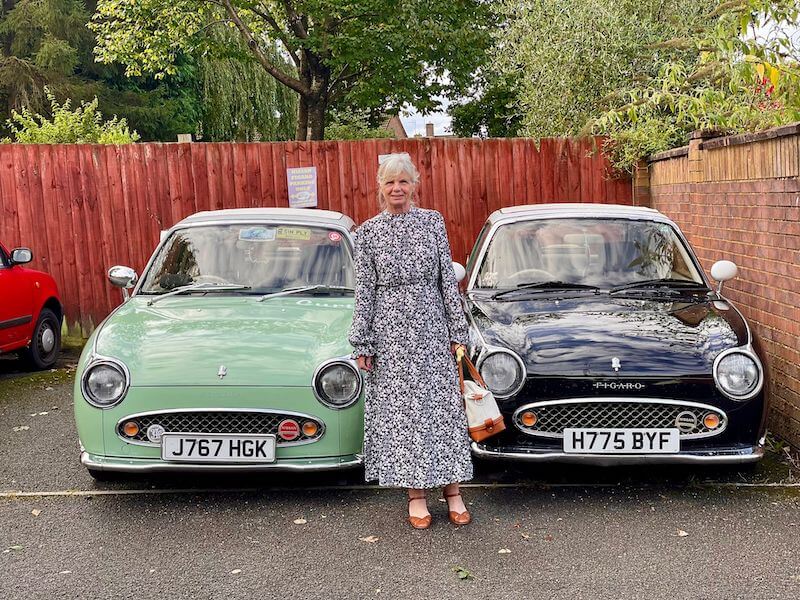 Owning Gurt has been a learning curve for mum and I – we do all the basic maintenance, servicing and mechanics ourselves – and I’ve re-dyed the carpets, re-painted the interiors and spruced up the leather upholstery. My dad was kind enough to have Gurt re-sprayed for my 17th birthday but they did a terrible job and it’s all starting to peel off so I’ve been teaching myself how to do it. I’ll do the best that I can, but it doesn’t have to be factory perfect because I’d never sell her.

I don’t think there’s any point waiting for nice days to go for a drive, it’s a waste of a car. You’ve got all that money on wheels sat there – if it works and it’s roadworthy, enjoy it. After seeing my mum go through cancer, I think life is too short to drive something you don’t love.”