Is the svelte Alfa Romeo GTV 916 one of the most underrated modern classics? 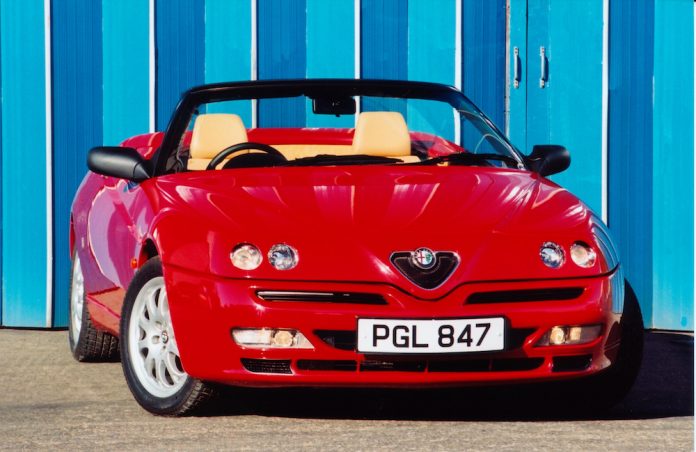 Gorgeous Italian styling inside and out, a pair of engines that sound fantastic and values that have yet to go bananas. Could the svelte Alfa Romeo GTV 916 be one of the most underrated modern classics at the moment?

It’s perhaps easy to forget how important and popular this car was 25 years go. Alfa Romeo had been in the doldrums since the 1970s – boxy styling that wasn’t for everyone, and once Fiat had stepped in and bought the firm from the Italian government, the first fruits of that labour had been a disappointment. That all changed at the mid-point of the decade with the introduction of the GTV. It was a completely different take compared the bread van 145 and brutish 155 – this Alfa Romeo had curves that evoked the brand’s curves of the 1950s and 1960s, but with a thoroughly modern twist. Though not quite as modern as you’d expect…

Enrico Fumia first designed the GTV for Pininfarina in the mid 1980s, and the final design was signed off in 1988. Fiat Group politics meant the design sat on the shelf for years, until it was previewed for launch with the visually similar Proteo concept car in 1992.

It stunned audiences at its Geneva Motor Show launch, and order books were soon being filled for the car. It had a new engine to show off – the 2.0-litre Twin Spark four-cylinder. This 16-valve engine produced a healthy 148bhp at launch, and was perfectly suited to the chassis. Based on the Tipo platform, its underpinnings matched a 155-derived front end with an independent muni-link rear suspension. To make sure it handled properly, it was said to have been benchmarked against the critically lauded Lotus Elan M100. The result was a car that handled beautifully – to the point that CAR magazine wasn’t too concerned that it was front-wheel drive. It still holds up to today – the initially light steering firms up under load, and the harder you push it the more feedback it gives you, allowing you to revel in its fabulous grip and almost understeer-free poise.

If there was a criticism of the Twin Spark engine, it was that it didn’t have quite enough punch. That’s where the 3.0-litre Busso V6 came in, packing a 217bhp wallop and a chunky 199lb ft mid-range surge. This engine is more than just about numbers, however – as you ease past 3000rpm the engine note changes from deep-rooted bassy growl to a heart-warmingly evocative howl as you the rev needle slams into the 7000rpm limiter. It’s heady, addictive stuff. The engine dominates the driving experience – in good ways and bad. It’s a fabulous engine for GT-style cruising, with a lovely relaxed feeling for when you need to settle back, and ample torque for overtaking. On the flip side, it’s nowhere near as composed on a B-road as its Twin Spark brethren – all that weight over the front wheels means that understeer is much more pronounced. In fact, point to point on the average B-road, the Twin Spark will likely be quicker…

However, over the years the nation’s passionate club members and specialists have honed both cars’ quirks to perfection. V6 models really benefit from upgraded suspension and a limited-slip front differential, for example.

There are further quirks – the interior is an ergonomic challenge for anyone north of six foot and there will occasionally be electrical glitches, but there are plenty of knowledgeable Alfa Romeo gurus about to help with the latter. As for the former – well, you can crouch a bit, surely? Trust us, it’s worth it. Running one requires a little bit of understanding – though the problems are likely to be small niggles rather than all-out misery. Check for regular servicing from marque specialists – a main dealer history-only history is not necessarily a good thing at all. Twin Spark engines require a cambelt/tensioners change every three years/24,000 miles and will cost around £500; if the engine’s rattling it might be the cam variator, which is worth doing at the same time as the belt change.

You get a little longer between belt/tensioner changes on the V6 – five years – but the cost rises to £835 as the engine consumes the under-bonnet space and it’s a labour-intensive job. While it’s being done it’s worth checking whether the water pump needs doing too. The Twin Spark engine grew in horsepower to 153bhp before it was replaced by the 165bhp JTS later in life (this used direct injection). The 3.0-litre V6 was replaced with a 3.2-litre version, which produced 237bhp. Other countries received different versions of these engines, notably a 1.8-litre Twin Spark and a 2.0-litre V6 for Italian tax rules; a few of the latter have made their way to the UK.

The good news is that for all the looks, noise and excitement, you don’t have to spend a fortune. Decent, useable Twin Sparks start at around £2500 but quickly rise to £3500 or more for excellent examples, while decent V6s start at around £4000 but the very best will be double that, if not more. Look out for the limited edition Cup model, which sported a bespoke bodykit and a special interior – you’ll need more than £12,000 for one of those. If you’re a keen B-road battler, the Twin Spark is the one to go for – the chassis is supremely balanced and the engine sounds great. The V6 model has all the drama and performance in a straight line, and with a few modifications it will handle just as well as its four-pot brethren, and is our choice for GT-style driving.

Whichever one you choose, you’ll find yourself falling in love with this stunning coupe.