An in-depth look at the evolution of the BMW E3, one of the most popular modern classics 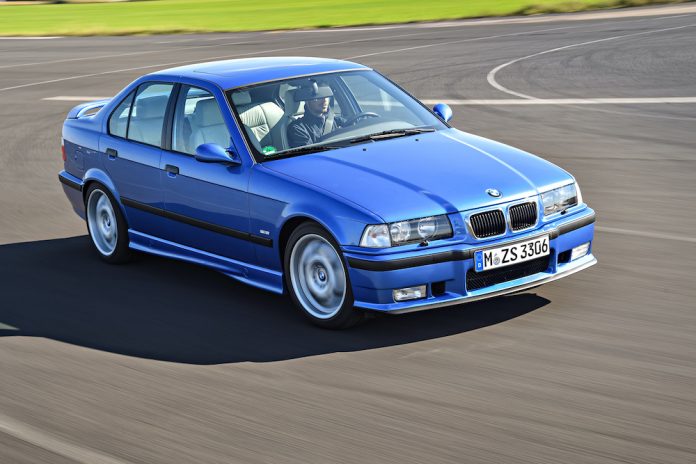 Combining the letter M and the number 3 strikes deep at the petrolhead core – even if you’re not a BMW enthusiast, you can’t help but respect what the cars, in their various forms, and their achievements.

Today’s BMW M3 is a long way from the stripped-out, homologation special E30 that conquered race tracks across the globe in the 80s. That particular version is the hero, the one that enthusiasts flock to – but perhaps it’s the version that came after that which really helped kick off the M3 legend as a road car. It’s also now represents a fantastic buying opportunity. The original BMW E30, though a hugely successful racing car, wasn’t quite an every day proposition for most. It was largely left-hand drive only and to derive the pleasures from its honed chassis and peaky engine, you had to wring its neck. Not ideal for the commute.

It was also a very rare car on UK roads – BMW cars might be everywhere now but back in the 80s and early 90s, spotting an E30 M3 in the wild would be something to determine your pub discussions for an entire week.

The E36 model, introduced in 1992, was a much different proposition. Cylinder count grew to six pots, bringing with it extra performance. The three-litre version doled out 286bhp, putting it in striking distance of a Porsche 911 Carrera for a significant discount. On the inside, there were leather chairs as part of a much more upmarket interior – this was as far as you could get from a stripped-out racer. Initially this upset the M3 hardcore, with many E30 owners trading their E36s in for more exotic fare. Press reports bemoaned that the BMW M3 had gone soft.

Those scribes had rather missed the point, and rather than act as a deterrent the M3’s popularity soared. It helped, of course, that it was available in right-hand drive. Here was a perfectly useable family-friendly coupe, saloon and convertible that could go toe to toe with sports cars. 286bhp might not sound a lot nowadays, but back then it was a weighty figure that helped catapult owners to 60mph in a smidge under five-and-a-half seconds and on to an electronically limited 155mph. Then there was the handling – not quite as cuttingly incisive as the E30 M3, but blessed with good feedback, well-weighted steering and a great dynamic poise. Oh, and then there’s the engine – a chunky 236lb ft comes in at 3600rpm, but stretch the revs to 7400rpm and you’re blessed with a heart-pumping howl that’ll have you searching for excuses to knock the gear lever down a ratio again and again.

The range was facelifted in 1995, with a host of improvements to the recipe. Engine capacity was increased to 3.2-litres, providing 320bhp and 258lb ft of torque, which was marshalled by a six-speed Getrag gearbox or six-speed SMG semi-automatic gearbox. Visually, the M3 was treated to a much more aggressive bodykit too. Production wrapped up in 1999, and the E36 M3 became just a cheap BMW, with many drifting their last as trackday specials or modified into oblivion. Now, as the classic world starts to appreciate the E36 M3, there are very few around in excellent condition. As a result, prices are starting to rise. We’ve seen excellent manual examples nudge £20,000, with special edition versions going for a lot more.

So, tempted to buy one? Well, you have to be careful – they certainly like to rust (the newest E36 M3 will have turned 21 by now), and you’ll need to check the front wings, boot, rear wings, jacking point, front anti-roll bar mountings and anywhere on the rear suspension. That M Sport bodykit can hide a multitude of tin worm sins… The interior trim is quite brittle – the clips that hold the door cards in place can snap, meaning that opening the door might not necessarily mean you can exit the car. Window regulators can fail, and you’ll want to check for block drains causing water ingress into the passenger footwell.

If the engine’s rattling, idling poorly or has poor low-end power you’re looking at a failing VANOS unit (BMW’s variable valve timing technology), which is around £250 to fix from an independent. Parts can be pricey and this is definitely not a car to be run on a shoestring. By now any M3’s suspension bushes will be in need of a refresh, if they haven’t been done already. Any M3 should be taut and responsive.

But don’t let these buying tips put you off, because the BMW M3 E36 is one of the most rewarding and current undervalued modern classics out there. The E36 shape is really coming into its own as a truly classic slice of automotive design, and the M3 remains a truly useable performance car that can still mix it with more modern machinery. With very few decent cars left, and an ever-growing reputation among BMW enthusiasts, it’s definitely one to keep an eye on.