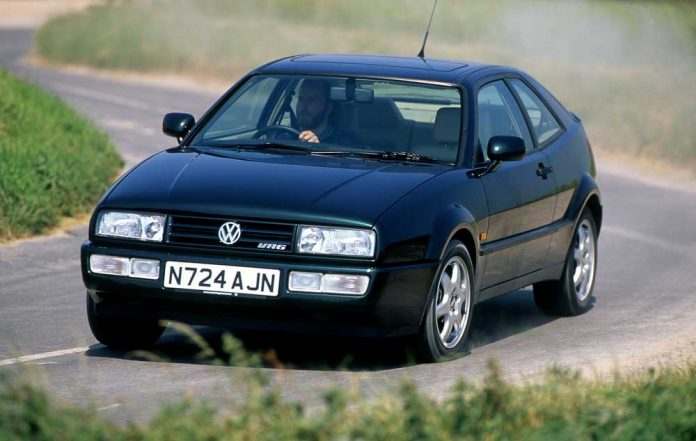 Some 25 years after production ended, we take a look back at the Volkswagen Corrado, a modern classic that’s a cracking coupe

Affordable coupes have rather gone out of fashion, but head back 30 years or so and there was plenty of choice just waiting to tempt the style-conscious buyer. The likes of Ford, Rover, Vauxhall and Volkswagen itself all offered models that injected a bit of cool into everyday motoring, but in autumn 1988 the last of those – to borrow football parlance – played a blinder. Already producing the affordable and sharp-suited VW Scirocco, it launched something rather tastier in the form of the car you see here.

The Corrado took VW’s coupe offering upmarket, blending style, quality and handling that lifted it out of the mainstream and into contention with more serious rivals such as Porsche’s 944. Designed by Herbert Schäfer and built on the platform of the Golf Mk 2, it was initially launched with a choice of a 136bhp, 4-cylinder engine borrowed from the Golf GTI or a supercharged G60 unit making a healthier 160bhp. But in 1992 came the engine that really lifted the car’s appeal. The narrow-angle VR6 was a 2.9-litre motor, ingenious packaging enabling it to squeeze beneath the bonnet where it pumped out a useful 190bhp and shoved the compact coupe to 62mph in 6.7 seconds and on to 146mph. And it wasn’t just those bare statistics that impressed; all versions of the Corrado offered brilliant handling but it was the punchy VR6 that allowed drivers to really make the most of the grip and composure.

There was a lot more this car’s repertoire than just B-road entertainment, though. Climb inside and you’d discover a cabin that not only provided a great driving position but also a pair of rear seats that could actually be used. And there was a decent-sized boot, too.  Okay, so the dashboard that was borrowed from the VW Passat hardly provided much sporting flair but it was sensibly laid out with instruments that were a model of clarity. It was all typically sensible and superbly well built, and while buyers parting with around £20,000 for a VR6 might have hoped for a bit more visual excitement, well that wasn’t really Volkswagen’s way.  Instead it spent the development budget on making the Corrado great to drive, and on that it very much succeeded. Proving that it had got the original recipe just right VW didn’t spend much money on changing it in the years that followed. Having replaced the Scirocco in 1992 (they had been sold alongside each until then) the most notable addition was a 2.0-litre engine that managed 115bhp, and as the end of production loomed the UK was treated to the limited edition Storm model. Just 500 were made, each example getting BBS ‘Solitude’ alloy wheels, leather trim, unique badges and a choice of Classic Green or Mystic Blue paintwork (there was 250 of each).

That ending actually came in 1995, and while the Corrado’s dynamic talents should have guaranteed a sure-fire winner the reality was a little different – just 97,000 or so were sold during the six-year production run. While it wasn’t quite the success VW had no doubt hoped for that’s done nothing to dampen the appeal amongst today’s enthusiasts. Quite the opposite, in fact.

Sought after by those that appreciate the quality, understated looks and sweet handling the best examples can fetch £10,000-12,000. You can find something nice for around half that, though. You’ll want to check for signs of crash damage and rust nibbling at the edges of panels, and replacing the timing chain on a VR6 is a pricey job, too, so make sure that’s been done. But find one that’s been cared for and this modern classic coupe will serve up a proper treat.