Designs are based on photographs from the Campbell Family Heritage Trust.

RetroClassic Clothing has launched two new t-shirts in the run-up to Christmas celebrating the record-breaking exploits of Donald Campbell.

Following in the wheeltracks of his illustrious father Sir Malcolm – himself a successful racing driver and record-breaker – Donald Campbell became the only man to break the Land Speed Record and the Water Speed Record in the same year, achieving that unique feat in 1964.

RetroClassic has collaborated with the Campbell Family Heritage Trust to produce the new t-shirts, which feature designs from the family’s photo archives. The first one shows Donald and Bluebird CN7 at Lake Ayre in Australia in July 1964, when he set a new Land Speed Record of 403.10mph. It was the last time that the record would be held by a wheel-driven vehicle, and Campbell had courageously made his runs on a shortened course that was still wet in places.

Completed in early 1960, the four-tonne Bluebird had been designed by Ken and Lew Norris and was powered by a 4000hp Bristol-Siddeley Proteus gas-turbine engine. Campbell’s Lake Ayre record broke the long-standing mark of 394mph, which had been set by John Cobb in 1947. At the end of 1964 it was decided that jet- and rocket-propelled cars were eligible to hold the outright Land Speed Record – heralding a new era in the sport. 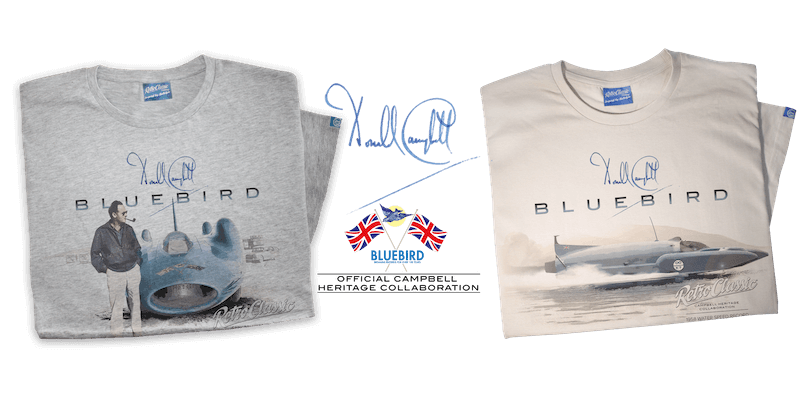 The second RetroClassic design features Donald Campbell in 1958 with Bluebird K7. The Englishman set seven Water Speed Records in the jet-engined hydroplane between 1955 and 1964, from 202mph at Ullswater to 276mph on Dumbleyung Lake in Western Australia. Like CN7, Bluebird K7 was designed by Ken and Lew Norris and was much modified during its life, with improvements to its aerodynamics, and it was powered by a Metropolitan-Vickers Beryl turbojet engine. This was later replaced with a more powerful Bristol Orpheus engine as Campbell tried to push the record over 300mph, but sadly he lost his life when K7 crashed on Coniston Water in January 1967.

‘Donald Campbell’s achievements on land and water are unlikely ever to be equalled,’ said Don Wales, Donald’s nephew and the holder of several records in his own right. ‘He was an exceptionally brave man and our family is very proud to be working with RetroClassic on these beautifully produced t-shirts. They’re a fitting tribute to him – and to the spectacular Bluebirds that he drove.’

Each of the t-shirts is offered in Heather Grey, Sand or White, and they join a RetroClassic Clothing range that also celebrates iconic aircraft such as the Lancaster and Spitfire, classic hot-rods, two-wheeled legends such as Lambrettas and Harleys, and other evocative machines from decades past. They are available direct from Retro Classic Clothing.

The Festive MINI is back and brighter than ever before, this year wrapped in 3,000 smart LED lights by creator Nicholas ‘Nico’ Martin and...
- Advertisement -