Having been involved in the restoration of hundreds of cars, Mike Brewer shares the story of his 1959 MGA restoration, imported from America and transformed by a team of experts.

For me, the MGA has to be the prettiest car MG has ever built. Not only is it stunning in its design, but it also brought MG kicking and screaming into the world of modern motoring.

The MGA would prove especially popular in the USA, which is where I found my car. MG did away with running board and the big separate wings of older cars and brought in a thoroughly modern design, every bit as stunning as rivals from the likes of Austin Healey and Jaguar.

I’d done an MGA restoration a few years back on Wheeler Dealers and it’s a cliché, but I’d wished I’d held on to it, so I’d always kept an eye out for another. I found a 1959 MGA in California, belonging to a fella called Jim and although it was a bit rough, thanks to the dry, warm climate, it was solid.

It had been resprayed yellow at some point in its life and it wasn’t the best paint job, but when you’re taking on a project like this, you’ve got to look beyond things like paint.

I’ve always said that if you get yourself involved with a restoration project the first thing to do is join a Club. Clubs are packed full of friendly people who are only too willing to offer you advice, support and the best go-to-specialists to get your car back to its best.

I’d joined the MG Car Club when I hosted MGLive! at Silverstone back in 2015, so I thought it might be a good idea to see what other MG Car Club members thought of the car. 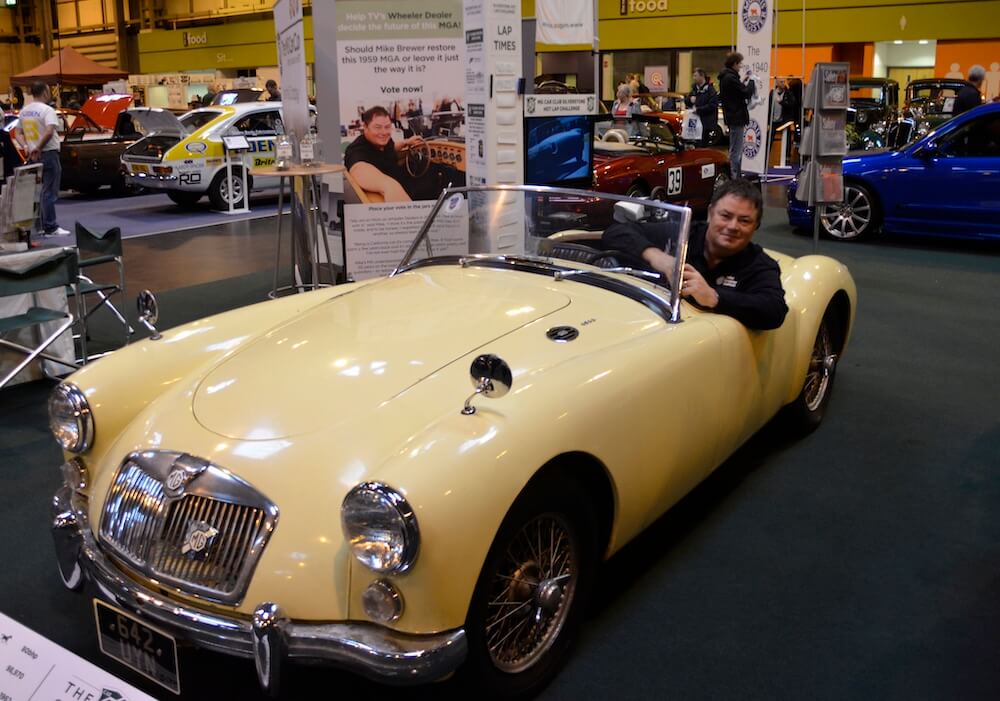 Barn finds are so popular at the moment and a lot of people really go in for ‘as found’ restorations – the car looks like it’s just come out of storage, dust and all, but mechanically they’re spot on – I wasn’t sure whether to go down this route with the MGA or to go for a full stripdown and rebuild, so at the NEC Classic Motor Show in November 2016 I put the car on the MG Car Club stand and let the members vote!

I spent quite a bit of time with the Club that weekend, talking to members with their own MGAs, some original, some modified, some being restored and they were able to show me all the little tweaks and changes that had been made to my car during its life – once I knew it wasn’t an especially original example, the opportunity to restore and modify the car was too good to refuse!

The A had a relatively short production run, there aren’t nearly as many MGAs as there are MGBs or Midgets and so some parts can be a little bit more challenging to source. With my time split between working in the UK and the States I had to be realistic – if I wanted to be able to use and enjoy the MGA I knew it wasn’t going to be a project I could tackle on my own, so I was going to need some help.

Once the Classic Motor Show was over, I took the A down to the MG Car Club’s HQ, Kimber House, in Abingdon. Kimber House is next door to the old MG factory site, so there was really something special about taking the ‘A’ home and putting it on display in the Clubhouse.

Over a cuppa at Kimber House, I talked with the guys from the MG Car Club, who suggested Moss Europe would be great to work with on the project as they supply almost everything I would need for the project. Good spares from a knowledgeable supplier are vital, so that was one big box ticked.

But I knew I would also need some real mechanical back up to get the project done in a reasonable timescale – someone I could trust to get everything just right while I was away working.

I’d entered the 2016 Peking to Paris rally but work meant I’d had to miss out on the rally proper, but my entry had brought me into contact with Rally Preparation Services (RPS). Based in Witney, they’re just up the road from the MG Car Club, so that made it even easier for me to link up with their MD Simon Ayris and the Workshop Foreman (and MG expert) Ben Harris – he’s built over a dozen MGs in his time and having an expert like Ben in your corner is invaluable.

With the MGCC and RPS being so close to each other it meant that Ben and Simon could give the A a thorough assessment and thankfully, Ben was satisfied that despite it looking a bit rough around the edges, the car had a really solid base.

After some time on display at Kimber House, the guys from RPS collected the car and got it to the workshop, ready to start stripping it down. Come the summer of 2017, they took the car up to Silverstone for MGLive! to continue the strip at the show. It got a lot of interest from visitors and members at the show – it was great to see just how interested people were in the project. 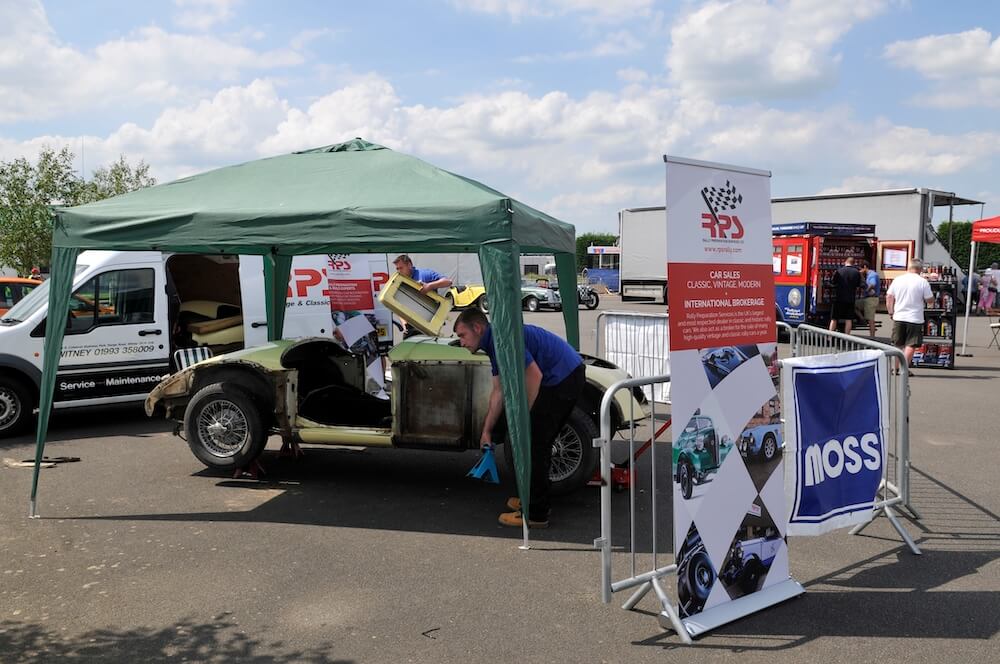 There’s always a worry that when you start taking a car to bits you’re going to find yourself with a mountain of welding or a chassis that’s too rotten to repair. Thankfully as Ben got down to the nuts and bolts he found the MGA was in really good shape – the biggest advantage of a California car is the lack of salt on the roads and therefore rust on the chassis.

With the A back at RPS’ workshop, my next stop was Moss Europe – Ben had given me a pretty lengthy shopping list and to be honest, I thought he was asking a lot of me to get it all in one go at one place but once I got to Moss’ warehouse I couldn’t believe the sheer amount of parts they hold.

I spent a good day down there with the guys, I could have been there even longer. There’s not just stuff for MGs, but they’ve got bits for Minis, Triumphs, Jaguars, all sorts – you can go and buy a bulb or a bodyshell. Luckily after a day with Felipe, their parts advisor, I had a fully loaded car and a fully lightened wallet! Seriously though, it’s important to have proper parts support and the guys at Moss came up trumps.

In the next part, I’ll be sharing what Ben and the rest of the RPS team got up to as they got deeper into the restoration and my plans for mods and improvements to the car.