Mike shares the next instalment of the MGA restoration story 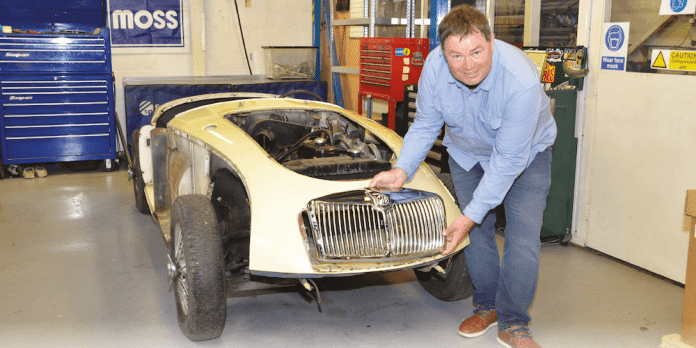 Mike Brewer continues the story of his 1959 MGA as the work begins on the restoration.

Wheeler Dealers Mike Brewer has put his 1959 MGA, imported from America, in the hands of a team of experts to restore it to its former glory. Here’s part two of Mike’s MGA restoration story.

When you’re tackling a restoration it’s important to work with people you can trust, because even if you have the time, space and skills to tackle every nut and bolt of your rebuild, you’re going to need other people’s help, advice or expertise somewhere along the line.

That’s where Ben Harris at Rally Preparation Services (RPS) came in with the MGA. Ben has restored and rebuilt dozens of classics in his time, but Ben really knows his way around an MG – especially the MGA.

It had been a while since Ben had had the opportunity to get to work on an MGA, so it was great timing for both of us. Ben is a lovely fella, really knowledgeable and with a great eye for detail. I’ll always advise anyone to have a good chat with someone you’re thinking of working with on your car – you’ll get a good feeling for what sort of person they are and what their company is like.

With the A back at RPS and all but stripped, Ben and I caught up in the workshop as he was ready to remove the body tub from the chassis.

Once the body was off, Ben got the chassis into a jig to stop any chance of the chassis flexing or being twisted. With the two separated, Ben could then give the tub a full inspection. Thankfully, Ben’s assessment showed that the tub was free of any serious rot – tricky bits like the ‘A’ and ‘B’ posts were really strong – it was clear that unlike a lot of cars who’ve spent their life in colder, wetter climates, my MGA had lived a bit of charmed life under the Californian sun.

There was more good news to come – Ben then moved on to look at the chassis and despite some light surface rust, Ben reckoned it was as solid as a rock and that it’s one of the best unrestored MGAs he’s worked on – just goes to show if you buy the right car in the first place you can take a lot of the pain and heartache out of a project like this.

With the good news from Ben, I started to turn my thoughts to the improvements I wanted to make to the car. I had no plans to shoehorn in a V8 or anything like that, but I did want more power and better drivability. 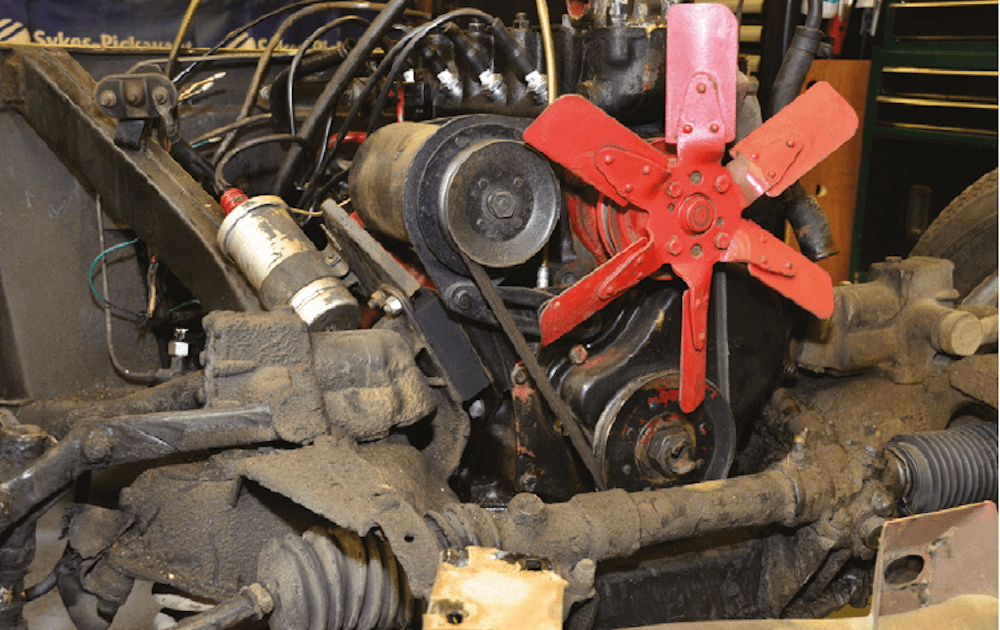 Chatting with the lads at Moss and RPS, we reckoned the best way forward would be to move to the larger, more powerful 1800 B Series, like you’d find in the later MGB. As well as that, we talked about a five-speed gearbox conversion. There’s a couple of reasons for this – we could stick with the MGB set up of four gears with overdrive but I want the A to get used by as many different people as possible, to raise money for charity, to be usable of really long runs and just feel a little bit more modern. A company called Vitesse do a kit for the B Series engine that uses Mazda’s MX-5 gearbox, people used to use either the Rover SD1 box or the Ford Type 9, both were great options but both are getting older and rarer, whereas the Mazda ‘box is newer, more affordable and a lot easier to source.

Another mod I was keen to do was to ditch the two 6 volt batteries for 1 modern 12 volt – again it’s about creating a car that’s usable and having a single battery just helps simplify things. 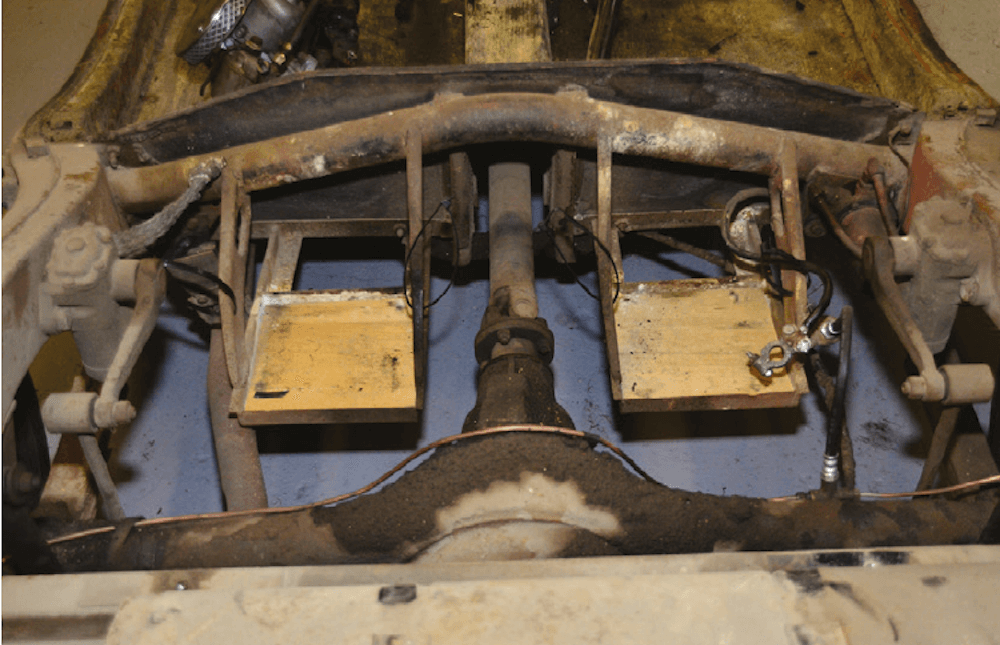 Ben had a bit of grief getting the screws that hold the floorboards down off the car, but he was expecting that, and with our decision to swap from two batteries to one, Ben used the two battery frames to make one good one. Once the floorboards were out of the way, he found that the floor rails, which are normally a top spot for rust and rot were in excellent shape.

The next job for Ben was to remove the front suspension – the engine had been left in place as the extra weight is helpful when removing the springs. Once the suspension was out of the way, Ben brought in some extra hands in the shape of Brooke and Josh – two other members of the RPS team. They set to work stripping the likes of the carbs, dynamo and manifold as Ben removed the propshaft, rear springs and the axle. The shocks and springs will be refurbed and reused, which will help keep costs down and the axle should also be good to go again – the hubs too are in really good shape.

The A is now effectively a chassis with an engine, so Ben and the team were ready to remove the engine and gearbox – I’ll keep the original engine safe just in case I ever part with it and the next owner wants to put the original units back in.

Looking ahead, I need to find help to tackle the paint, bodywork and powdercoating – RPS don’t do this sort of thing so it was time to do my homework and find someone to tackle the jobs RPS aren’t set up to do.

It’s always worth asking if one workshop has any recommendations for others – in a lot of cases a workshop might have a go-to paintshop. If not, get on your Club’s forum or Facebook group and ask members who they’ve used or who’d they recommend.

The chassis and other smaller items will need shotblasting too, so while the car’s condition has saved us a lot of work, there’s still plenty to do.

I’d already ruled out going back to the old English white and I certainly don’t want it yellow. I asked the MG Car Club to suggest some colours from other MGs – I wanted to try and keep it an MG colour. Adam at the MG Car Club mentioned Starlight and Platinum silver from the early 2000s, but also Pewter Silver – a metallic silver used on the very last of the MGB GTs from 1980. It’s a deeper colour than the more modern shades and it feels much better suited to the lines and curves of the A. 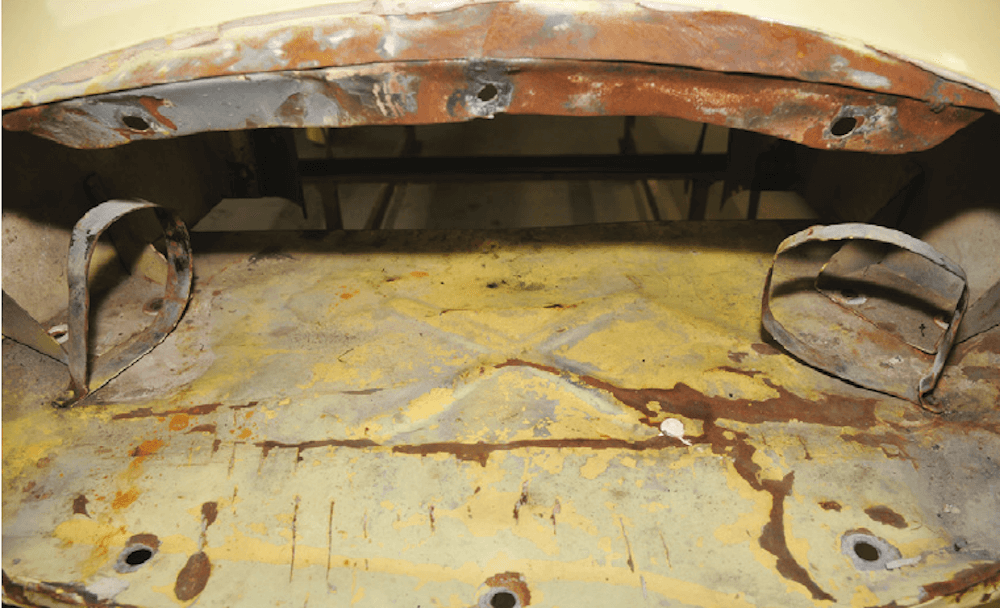 After talking with Simon at RPS and the guys at the MG Car Club’s Kimber House, I was recommended to Vale Powder Coatings in Abingdon, while RPs recommended Cotswold Accident Repair who, thankfully are a stone’s throw from the RPS workshop.

Ben set to work thoroughly cleaning the chassis, getting as much of the muck, oil and dirt off with a combination of pressure washing and elbow grease. Once Ben was happy he’d got it as clean as possible, the chassis was carried across the road to Cotswold Accident Repair, where it could be shotblasted.

If you’re not familiar with shotblasting, it’s a pretty clever system where material is fired at the item under pressure to take off top layers of paint and uncover the metal surface underneath. It’s a lot less labour intensive than having to rub the metal work down and better for the environment compared to chemical paint stripping.

With the chassis ready for powdercoating, it was time to get moved back to Abingdon and Cotswold Accident Repair could at last get on with the bodywork.

In the next part, I’ll be updating you on the bodywork and chassis as well as the installation of the new engine going into the MGA.