The epitome of so bad it's good tv. 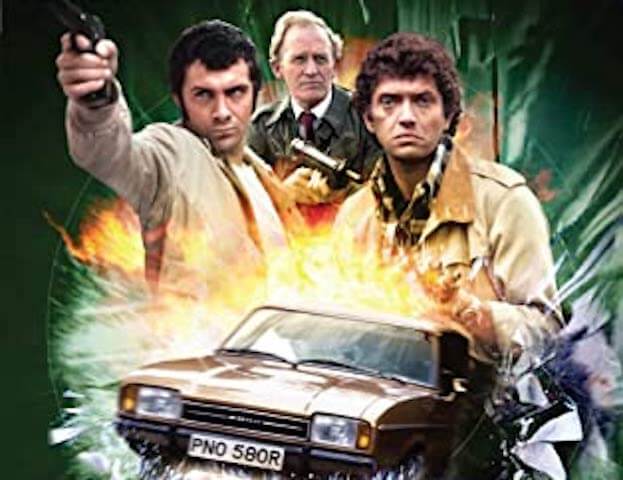 The iconic Ford Capri is the most famous car driven by William Bodie, but there are plenty of other vehicles which may have slipped our memories over the four decades since the show first aired. Here’s our friends at Lancaster Insurance’s Top Ten cars from The Professionals.

For fans of The Professionals, there are two abiding mysteries. Firstly, who thought the original title sequence with the Rolls-Royce Silver Shadow was a good idea?

Secondly, why did the squad change allegiance from British Leyland to Ford?

Bob Rocca, the expert on all matters CI5 explained in the book Cops and Robbers: The Story of the British Police Car, the British Leyland vehicles in Series One were due to the arrangement between Mark One Productions, the makers of The New Avengers. “When the second series of that didn’t materialise, it was agreed to finish that agreement on The Professionals”. But what could have been a significant PR opportunity was squandered as Leyland could not provide the numbers of required cars on a permanent basis – whereas Dagenham was. And the rest is television history – Sunshine. 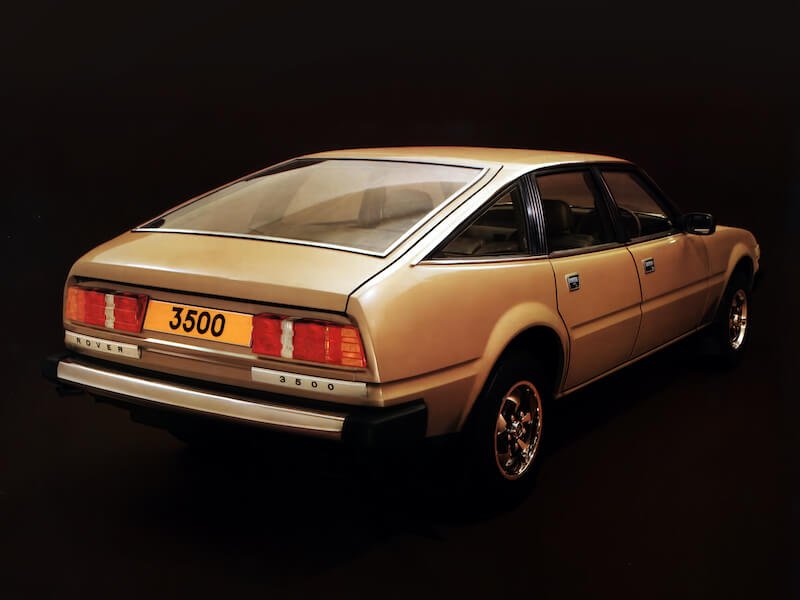 Mark One originally intended George Cowley to be chauffeured in a Daimler Double Six S2, but, as if to anticipate future problems, British Leyland was unable to provide one. So instead. Gordon Jackson would use the Turmeric Yellow 3500 SD1 that served as transport for John Steed in The New Avengers: BL employed one of the chase sequences for their launch film –

In the event, the Rover appeared only three times for CI5, although it did make some drive-on appearances in The Return of The Saint. Had Leyland been more organised, Cowley might even have favoured a V8-S and a VDP S1… 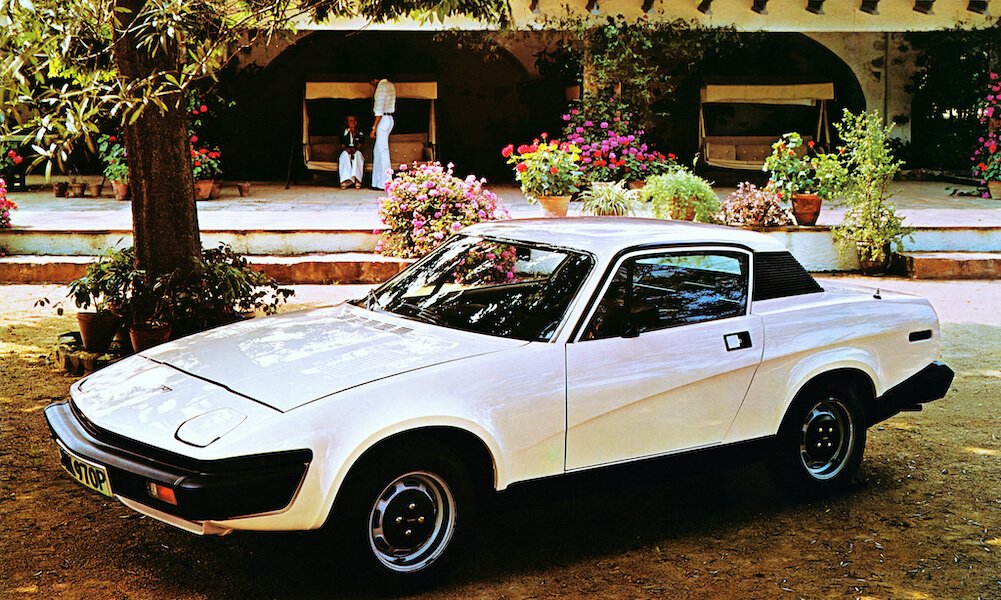 Production of the TR7 began in 1974, but British sales did not commence until May 1976, so The Professionals was invaluable publicity for the latest Triumph sports car. The Pageant Blue TR7 certainly looked good, and besides, an MGB Roadster might have wrecked Ray Doyle’s Harpo Marx hairstyle. As for the driving scenes, the stunt team led by the great Peter Brayham undertook the dangerous sequences, and the main actors were involved when the director required close-ups. 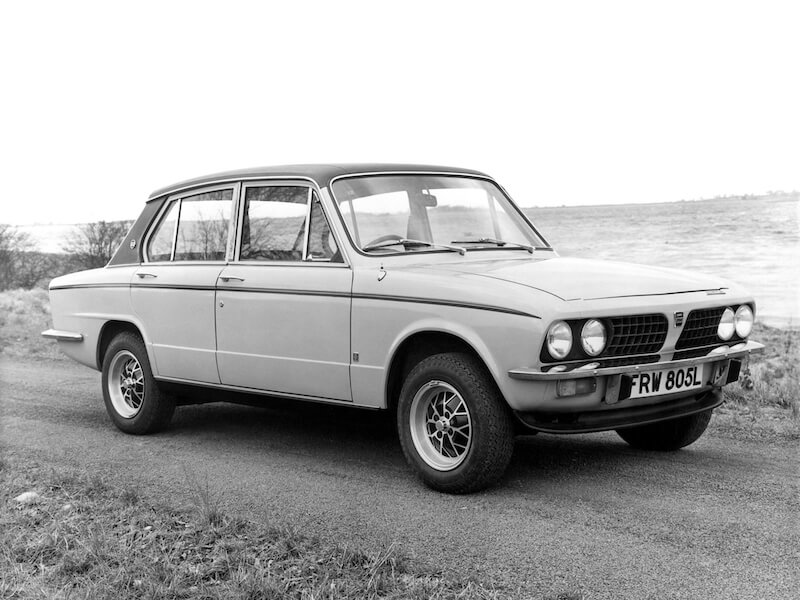 Doyle and William Bodie drove the Dolomite, but it was more associated with the latter, especially when he donned his second-best brown blazer. In addition, the Sprint starred in some of the most brilliantly awful Professionals episodes;Long Shot with an overdubbed Roger ‘Trigger’ Lloyd Pack as the world’s least plausible Lebanese hitman and Where The Jungle Ends, with David Suchet as a mercenary. The second-named stole an RAF Bedford M-Type for a low-speed getaway and could probably be overtaken by a shopping trolley, let alone a well-driven Triumph. 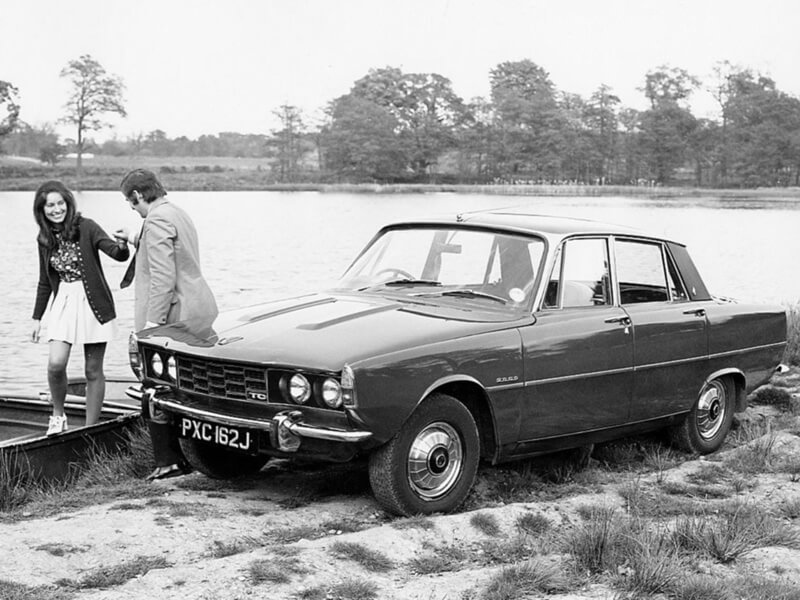 In addition to the principal cars, British Leyland agreed to issue Mark One with a police Range Rover, an Austin Allegro Panda Car and a Triumph 2000 Mk. II. Alas, as with the Double Six, these were all “pending availability” – and none of them actually arrived on set. Nor did a black Mini, which the producers intended initially as Doyle’s backup vehicle, while his intended main transport, a metallic green Leyland Princess, was relegated to general unit duties. Bodie and Doyle also drove a 1971 Rover 2000, and Leyland further supplied the production with a black Austin Maxi – but by the autumn of 1977, Ford was very much in the frame. 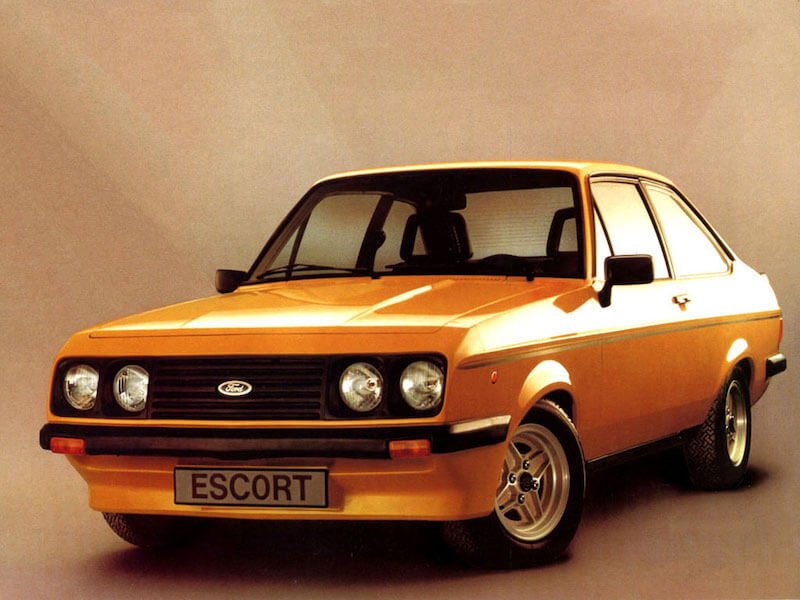 In reality, the Escort was a 1977 model, registration PNO 672 R. During the programme’s run, the RS 2000 gained an electric sunroof to make it easier for the crew to light the cabin. Mr. Rocca points out that by the time shooting commenced, the Escort Mk. II “was nearing its end of shelf life too, and the result of putting that car in the show didn’t really have the same impact that Ford’s would have hoped”.

Happily, the RS2000 survives to this day. 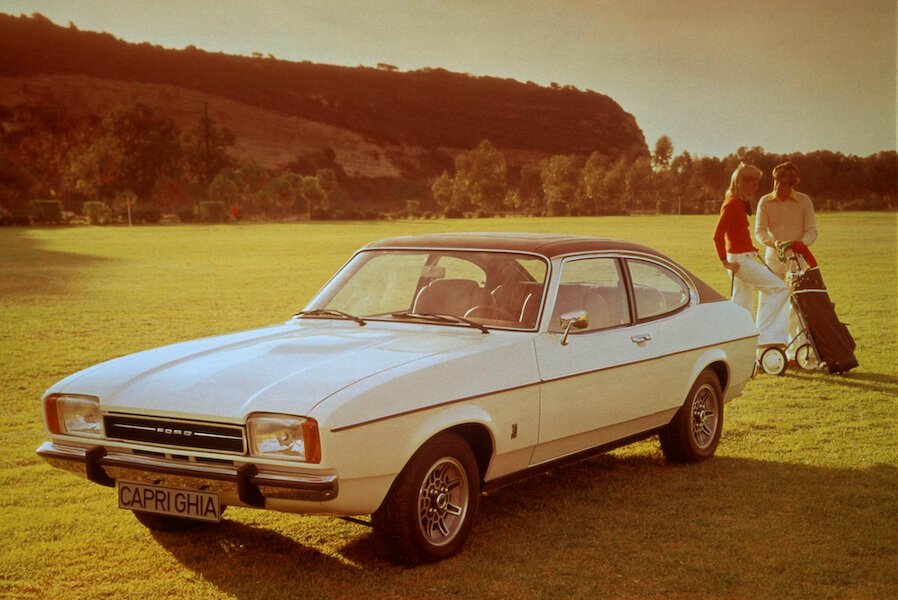 Lewis Collins in a Ford Capri – who could ask for more on a Friday night ITV show?

An Arizona Gold Ghia Mk. II replaced the Dolomite while in addition to the Escort, Doyle occasionally piloted a Strato Silver 3.0S Mk. II, complete with an X Pack body kit and Ronal alloy wheels. Brayham recalled that Collins and Martin Shaw were “excellent drivers, but I taught them a few tricks for the camera”. Incredibly, both Capris – together with the six later Mk. IIIs survive to this day.

N.B. Fans of The Professionals may wonder why there are so many cars chases through the Home Counties in Series One – the answer is the budget did not initially extend to London pursuits. 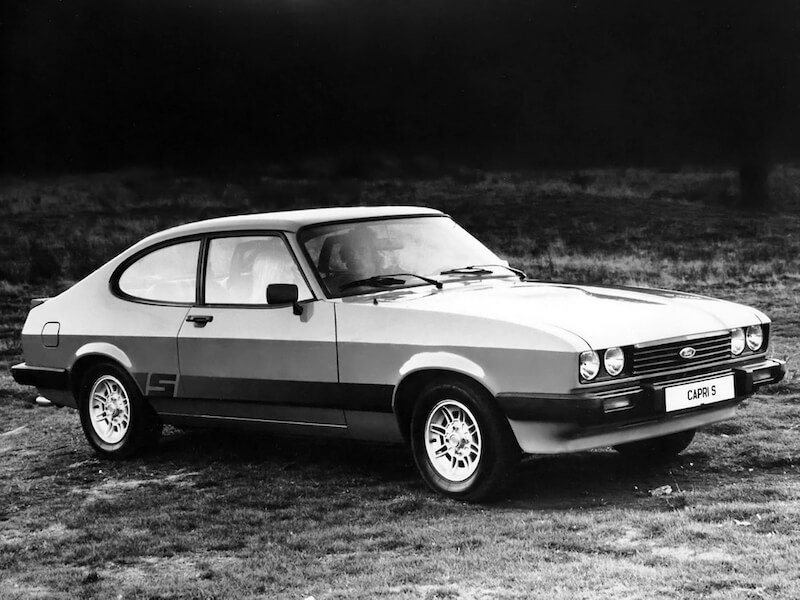 Or the car that will forever be associated with The Professionals:

Dagenham was uncertain whether two on-screen Capris were excessive, so they initially offered Mark One a Cortina, which was declined. The fifth and final season saw Bodie in (what else?), yet another Strato Silver 3.0S and Doyle in its Tibetan Gold counterpart. By that time the S was about to be replaced by the 2.8 Injection and Ford did not have two silver cars to loan to Mark One. 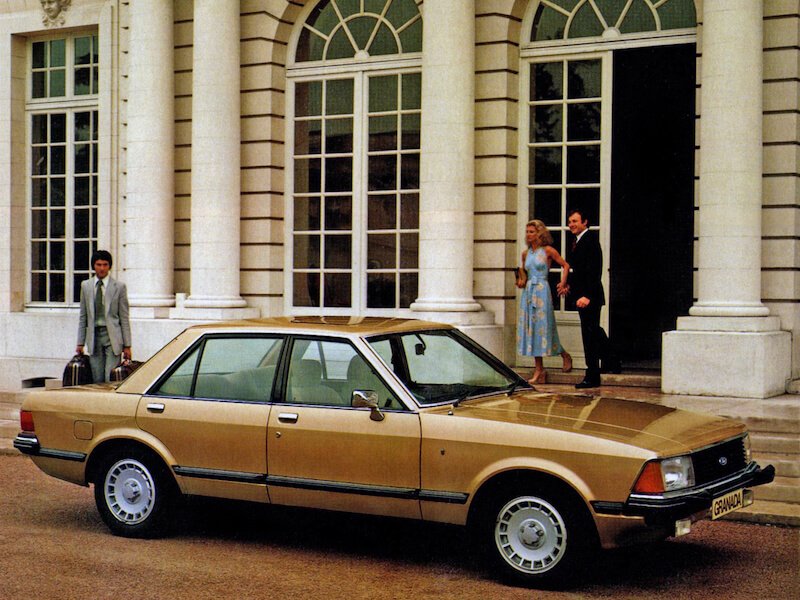 The following season featured a striking-looking Midnight Blue Ghia, which Cowley retained for the fifth and last series. In the opening credits from Season Two onwards, we should also mention the Consul that crashes through a plate glass window at Wembley Stadium. Behind the wheel was Mr. Brayham, who later remarked the stunt took him ”all of a morning!” 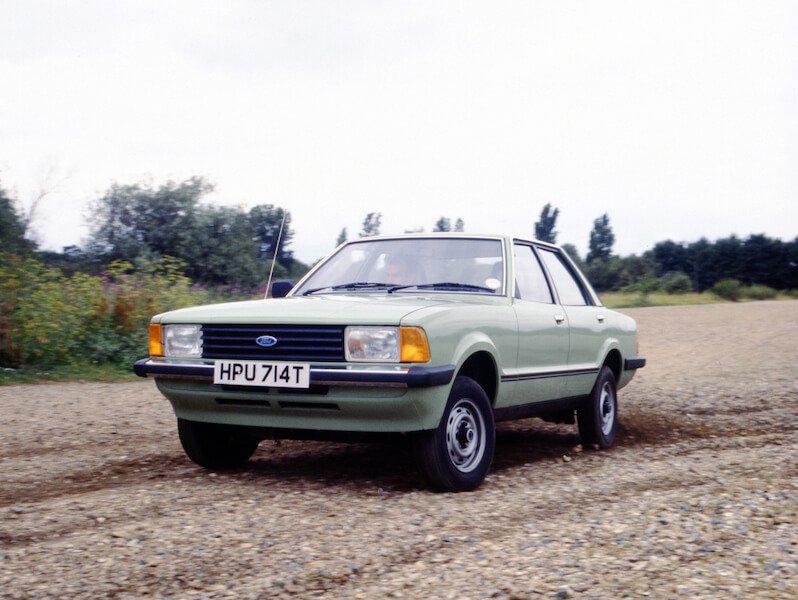 Not a car immediately associated with CI5, but Ford provided The Professionals with 2.0 GL Mk. IV ‘Courtesy Car’ in which the unit driver Alan Lind would drive the leading actors to the location every morning.

The Cortina would also make occasional on-screen appearances, as did several other Dagenham PR Cars – a Mk. IV blue 2.0 GL and a red 2.3 GL, and a Mk. V Venetian Red 1.6 LS and Highland Green 2.0 GL. Plus, a very desirable 2.3 Ghia S Mk. V Estate appears in Acorns, a hapless Mk. I GT ‘Aeroflow’ is hurled down a motorway embankment in Heroes and an equally doomed 1600 XL Mk. III has a memorable moment in Private Madness, Public Danger. 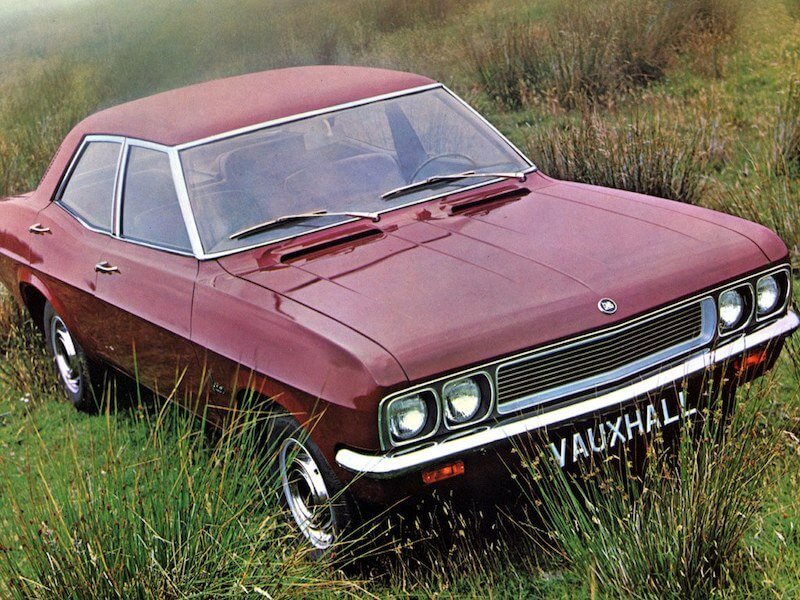 Mark One sourced their ‘action cars’ from Kingsbury Motors and 99 Cars, resulting in sunshade-wearing villains using Jaguar XJ6 S1s and quite a number of FD-series Vauxhalls. That Victor 1600 Super in Mixed Doubles is obviously destined not to survive beyond the closing titles.

Meanwhile, Ford was not the only company issuing PR vehicles as Opel arranged for a pair of Rekord E 2.0S Estates to appear on the screen. The fourth season had guest appearances from two now rare Suzukis – an LJ80 in Wild Justice and an SC 100 ‘Whizzkid’ in Lawson’s Last Stand. Nor should we forget that unfortunate Morris 1800 Mk. I and Vanden Plas Princess 4-Litre Limousine used by CI5 in Blind Run.

Andrew Evenson, Senior Operation Manager for Lancaster Insurance, said: “It does seem that the PR team at Dagenham had much more budget available than their BL counterparts. The sheer number of Fords used in the series eclipses that of Leyland. Everyone loves a Fast Ford and they suit the team from CI5 really well. The Rover SD1 is one my all time favourite BL cars but, of all the cars featured, the Mk3 Capri would be my choice. Whichever you own these are increasingly valuable classics and we’d suggest exploring an agreed value policy with a specialist such as Lancaster Insurance so that the true value of the car would be realised should the worst happen.”