Get your trousers on – you’re nicked! 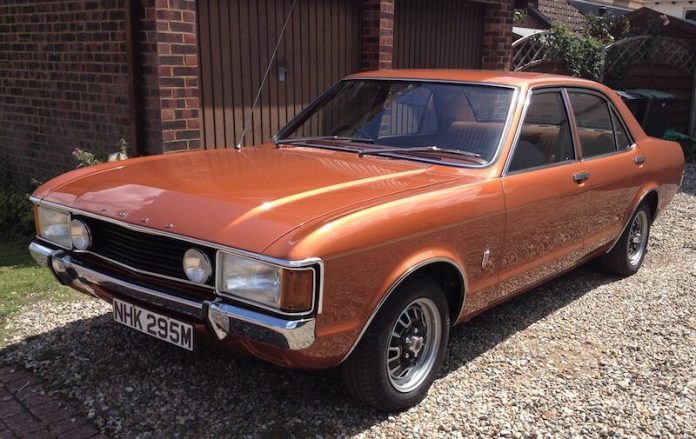 The Ford Granada celebrates its 50th birthday in March, and it remains famous for one television show – The Sweeney. Here’s our friends at Lancaster Insurance’s Top Ten facts about The Sweeney.

Some people might suggest that the most renowned vehicle in The Sweeney is a Consul GT. But in terms of product placement, and stunt work the Copper Bronze Dagenham press vehicle, registration NHK 295 M, is one of the very few vehicles worthy of the description “iconic”. Cue the opening titles…

The Consul GT essentially combined a relatively low specification (until 1975, only the more upmarket versions wore a Granada badge) with the 3-litre ‘Essex’ V6 engine, stiffened suspension, halogen driving lamps, a matt-black grille and ‘sports wheels’. Motor Sport magazine praised its handling – “out of a well-known hairpin bend the Consul can be accelerated hard with none of the inside rear-wheel spin or axle tramp which afflicts, for instance, a BMW 2500.”

The Granada Mk. I – Other Screen Appearances

A GXL and a police liveried Consul GT features in Special Branch, Euston Films’ previous police series, and a Granada 2.5 Mk. I appeared in Regan, the pilot episode of The Sweeney. One of the first Consul Ls featured in the legal drama The Main Chance and a Granada Estate in George and Mildred. A Ghia Saloon and Coupe guest-starred in the John Wayne vehicle Brannigan, whose stunt co-ordinator Peter Brayham was about to commence work on The Sweeney.

NHK 295 M was a member of Dagenham’s PR fleet. At that time, Ford wished to promote the GT as a sporting saloon, and Brayham had been impressed by the Granada family when working on Brannigan. The Consul was fitted with the optional power steering and sliding roof, and it undertook no other press duties during its time with The Sweeney. NHK was based at Ford’s garage in Middlesex, and Brayham was instructed not to damage it. The only special equipment installed by the film crew was ‘two-way radio in the glovebox.

A Granada GXL finished in Astro Silver, and a very early Ghia in Onyx Green made some cameo appearances, and in late 1975 NHK left The Sweeney. However, it would appear in the opening titles of Series III. The reason was Ford facelifting the Granada range, dispensing with the Consul badge, with the 3000S replacing the GT. Regan and Carter went in to use an Astro Silver S and a gold-coloured Ghia.

By Series IV, the Squad favoured a Granada 2.8iS Mk. II which was still equipped with the traditional bell (as indeed were many London Met. Vehicles at that time):

NHK had to be reliable as The Sweeney was made on a very tight budget – the motto on location was “Shoot the Rehearsal!”

A pool of Jaguar S-Type served as villains’ transport, and they were not always in the best of health; one of them caught fire during the making of Faces. On another occasion, a Granada broke down, so Thaw and Dennis Waterman had to bump-start it on the middle of a dual carriageway. Each episode was shot in just ten days with locations usually within a few miles of Colet Court, Euston Films’ HQ in Hammersmith. 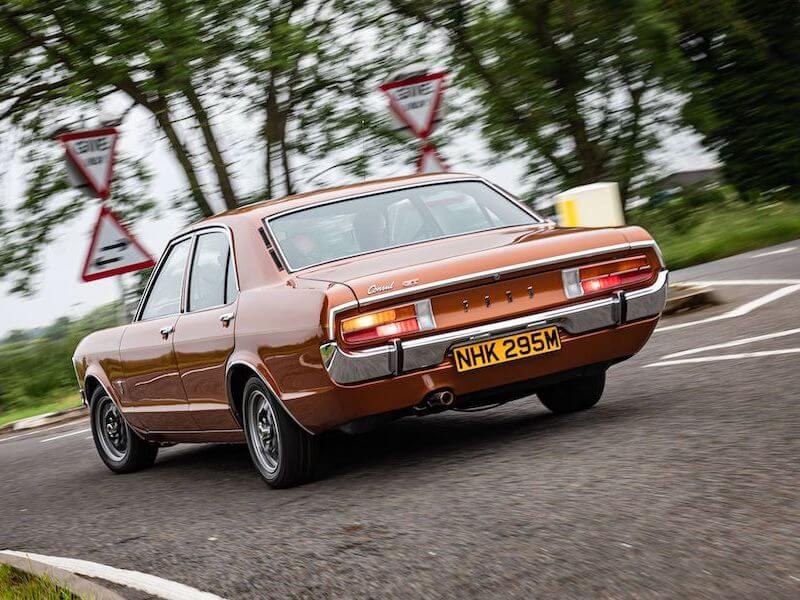 The very early Triumph 2000 Mk. I with a fake ‘H’ registration is clearly cannon fodder in Poppy, as was the Vauxhall Velox 3.3 PB of In From The Cold. Money, Money, Money guest stars a Renault 16 (described as a ‘foreign car’) and Ringer, the first episode of Series One, has Brian Blessed in a Jaguar XJ6 and an Austin LD30 ‘Wandsworth’ Ambulance.

The villains in Pay Off favour an Austin A60 Cambridge as a very unlikely getaway car while the uniformed branch use Rover P6Bs and Triumph 2.5 PIs. Plus, The Sweeney is a reminder of how many Commer 1500s used to be on the road.

The stunts on The Sweeney were the equal of any American production of the time and a testament to Brayham and his team. The industry veteran Richard Hammatt recently explained that the practice in the 1970s was stage a chase “in a dirty yard or outside of a warehouse. You could really throw the Jags around in the dirt, and the dust rising made the sequence look brilliant.”.

As for the unfortunate S-Types – “listen to the sound of the engine. We were always opening up the jets. We would drive in second gear and basically rev the nuts off, so everyone thinks you are doing 100! The valve bounce in those days sounded very impressive! We could not rehearse, and one reason was that the handbrake might wear out, and we needed it to make a dramatic turn.”

Very hard to choose, but our vote is Stoppo Driver, which aired on Monday, the 6th of March 1975.

Relief driver Detective Constable Brian Cooney chases a getaway Jaguar S-Type (of course) through Battersea with guest star Billy Murray actually taking the wheel for many scenes. The Consul has a camera attached to the wing and travelled at 60 mph through Battersea to make the shoot even more challenging. Nor could the crew rely on an emergency warning to keep stray members to the public at bay as the police bell was post-synched. The episode ends with another unfortunate S-Type crashing into some oil drums at Surrey Commercial Docks.

N.B. The fire engine at the end was genuine – it arrived in response to the explosion as there were reports of a real emergency!

The last Sweeney episode, Jack or Knave, aired on the 28th of December 1978. Ten years later, NHK was acquired by its current owner. Unfortunately, at that time, it was in a very poor state of repair, having suffered a front-end accident and with a body riddled with corrosion. However, a full restoration commenced in 2004 and was completed in August 2019, just before it caused a sensation at the Lancaster Insurance Classic Motor Show.

Classic Cars magazine reunited the Consul with Billy Murray by the end of that year, and he vividly remembered driving it back in 1974. 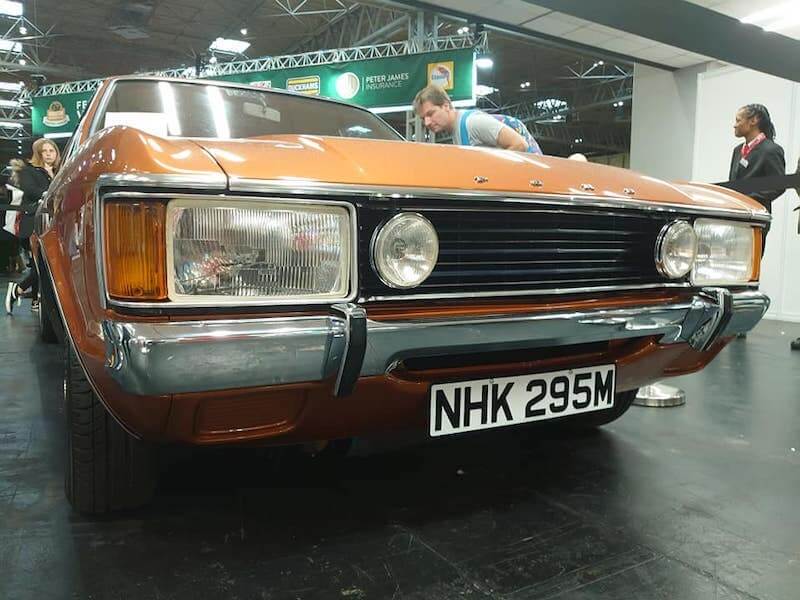 The Sweeney would have been a success had Regan and Carter favoured a Vauxhall Ventora FE or a Triumph 2.5 PI – but that Cooper Bronze Consul GT is a car that evokes so many childhood memories.

To quote that Classic Cars article, it evokes “Harry South’s theme tune and images of grey-faced villains in bad suits who really did smell of pubs and Wormwood Scrubs”. As for its impact, its appearance at the 2019 Classic Motor Show prompted visitors of a certain age to utter the limn “Get your trousers on – you’re nicked!”

Andrew Evansen, Senior Operations Manager of Lancaster Insurance, said: “As a 70’s child I absolutely adore the big Fords of that era.  These are true classics and we’d suggest that anyone who is lucky enough to own one of these consider an agreed value policy with a specialist such as Lancaster Insurance so the true value of the car would be realised should the worst happen.  That said, whichever of these cars is your favourite I’m sure you take much better care of it than Regan or Carter did!”