We take a look back at the much loved musical. 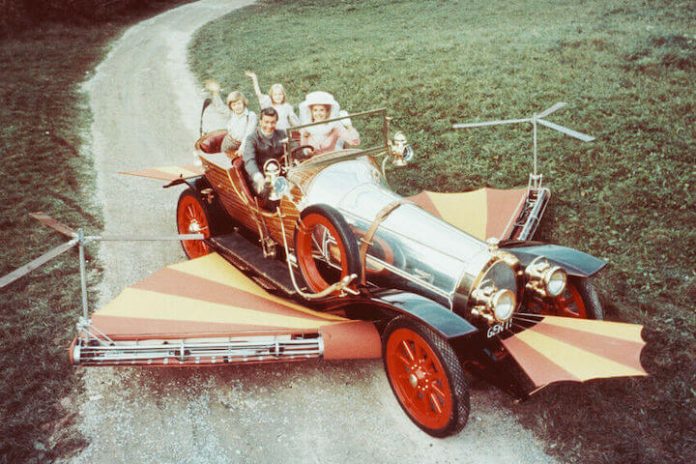 The recent passing of Sally Anne Howes has transformed this ‘Top Ten’ into a tribute to her most famous screen appearance. Chitty Chitty Bang Bang is one of the most elaborate musical comedies in the history of British cinema as well as co-starring one of the best-remembered cars of any film. Here our friends at Lancaster Insurance give us a few facts about this perennial favourite. 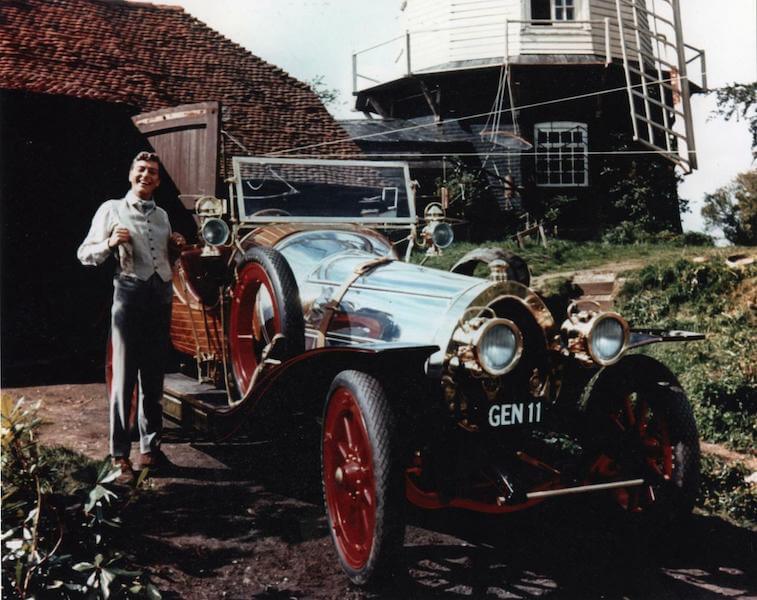 Alan Mann Racing made the six Chittys, and six vehicles were employed on screen: two for the racing scenes and four other cars, including a ‘hovercraft’ model that also appeared in the flying sequences. Their power was from the Ford ‘Essex’ V6, and the transmission was a Borg Warner box. Apparently, Dick Van Dyke could not cope with manual gears, and the actor found the car to have “the turning radius of a battleship”. However, during an exhibition drive at Crystal Palace, Graham Hill managed to attain 120 mph in one of the Chittys. 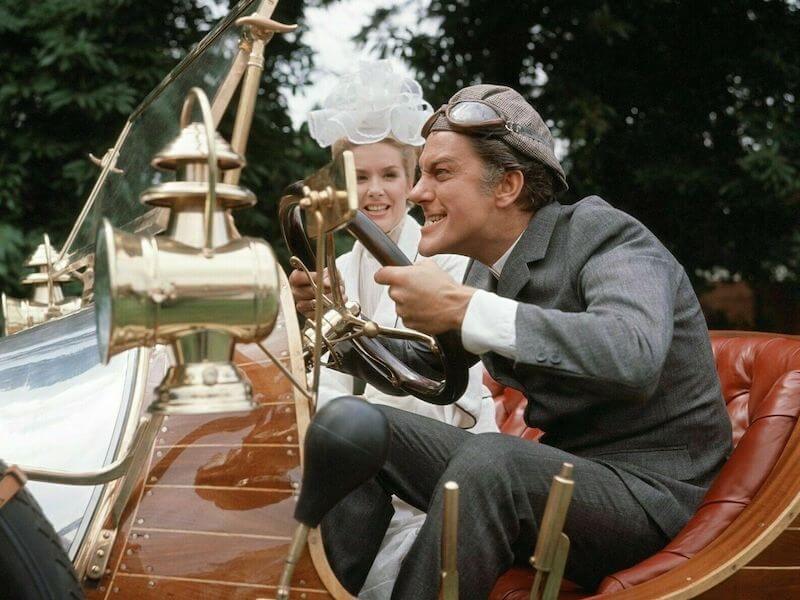 Julie Andrews was the first casting choice for Truly, and Dick Van Dyke initially turned down the role of Caractacus Potts.  “However, each time I said no, Cubby came back with more money. I’m talking serious money – more than seven figures, which in those days was mind-boggling, plus a percentage of the back end, which I never counted on. So I finally agreed”. He also insisted that he would not have to attempt an English accent in the wake of Mary Poppins.  Here is another reminder as to why this would have been a very bad idea. 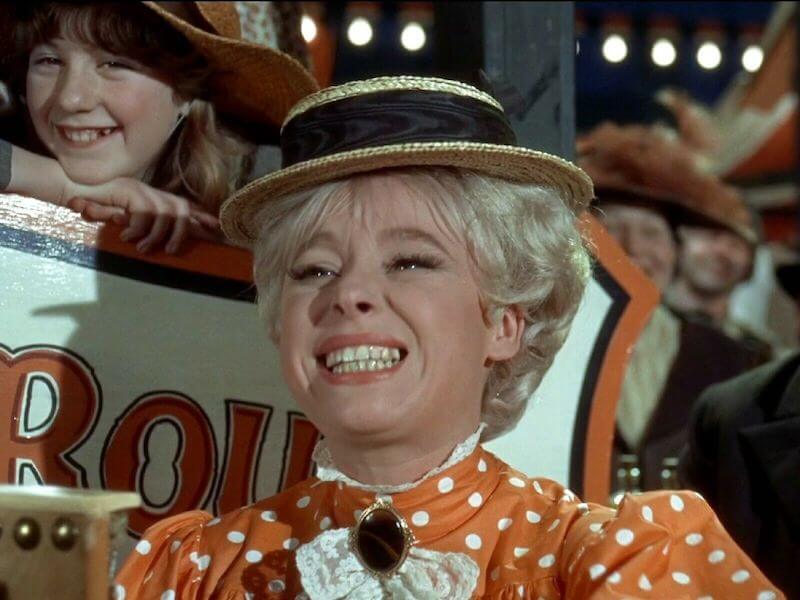 Asides from the utterly terrifying Sir Robert Helpmann as The Child Catcher, the cast included Victor Maddern, Richard Wattis and Davy Kaye. There was also an appearance from Barbara Windsor before she became automatically associated with the Carry On films; by 1968 she had only appeared in Spying and Doctor. In major supporting roles were Lionel Jeffries (who was famously six months younger than his screen son), Benny Hill in a rare semi straight character role and James Robertson Justice, in full Sir Lancelot Spratt mode, as Truly’s father. The film was produced by Albert Broccoli, and a 007 connection is maintained with the presence of Gert Fröbe and Desmond Llewelyn. 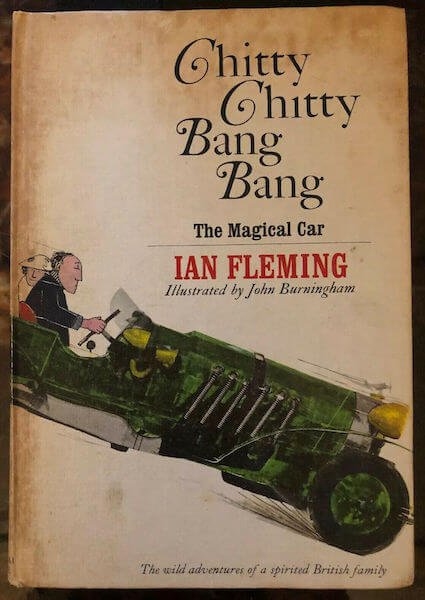 As is often the case, there are considerable differences between the original book and the screen version. Chitty-Chitty-Bang-Bang: The Magical Car was Ian Fleming’s only story for children, and the first of three volumes was published on the 22nd of October 1964. Unlike the film, the narrative takes place in the early 1960s, and Caractacus Potts is a happily married retired Commander RN. Meanwhile, the eponymous car was based on the fictitious ‘Paragon Panther’ with illustrations faintly reminiscent of a 1920s Bentley. 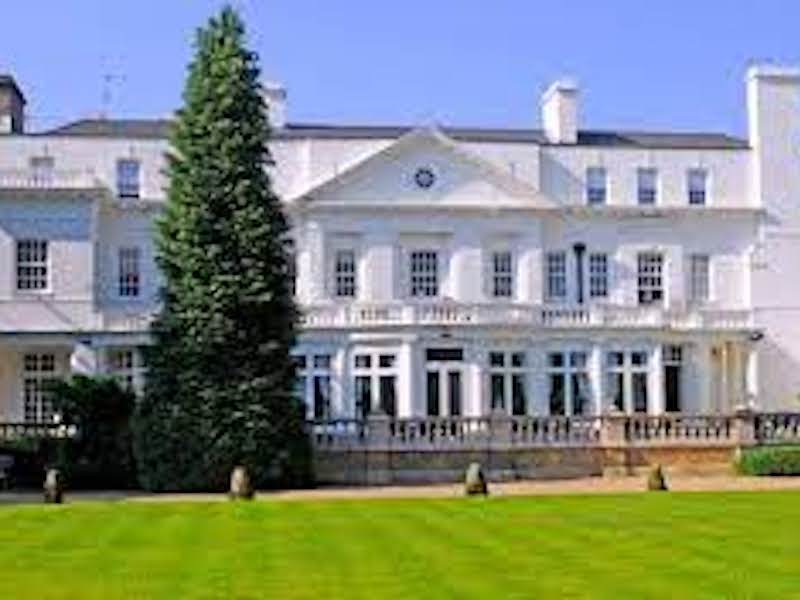 Filming commenced at Pinewood Studios in June 1967, and the racing scenes were shot at Booker Airfield. The children first encounter Truly Scrumptious and her replica  1909 Humber 8 hp at Russell’s Water in Oxfordshire, and their windmill home is near Turville in Buckinghamshire. The Kempton Waterworks doubles as the Scrumptious Sweet Company and some of the driving scenes took place in Hambleden and Iver Lane, both recognisable from several other pictures. Truly herself resides at Heather den Hall, part of the Pinewood complex and another familiar edifice of British cinema. 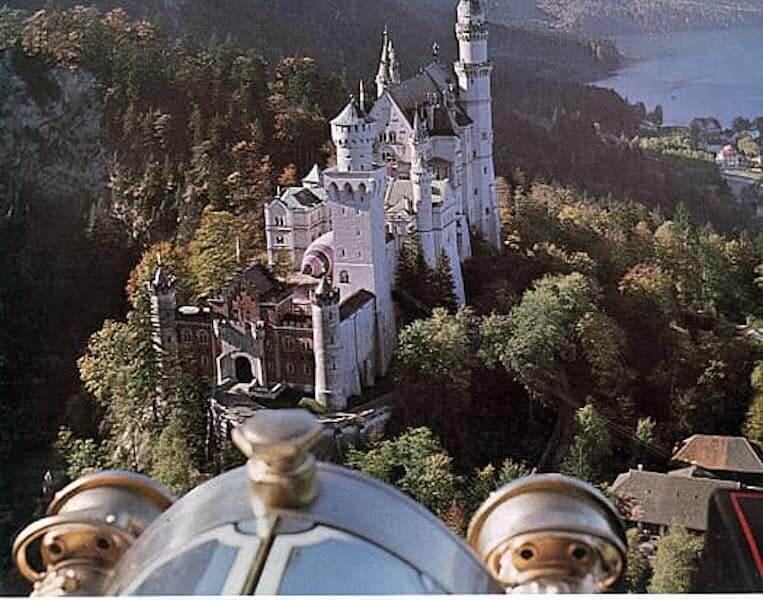 Neuschwanstein Castle, built for Ludwig II, ‘The Mad King of Bavaria’, was the residence of Baron Bomburst; local residents took part in the film as extras. The exterior of Benny Hill’s workshop is in the German town of Rothenburg ob der Tauber, which is also where Jeremy and Jemima encounter The Child Catcher. Some of the driving scenes were undertaken in France, and in his memoirs, Van Dyke points out the vineyards in the backgrounds to the ‘English’ countryside. It is certainly noticeable how Chitty heads towards Chesil Beach in Dorset only to arrive at Cap Taillat near Ramatuelle. 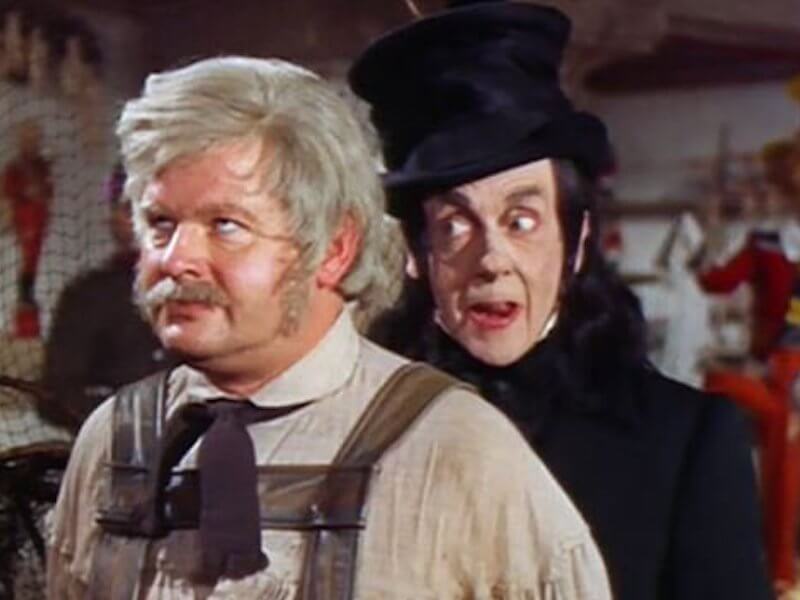 Roger Ebert thought the picture was “two hours of fun that was surrounded by about another 45 minutes of soppy love songs, corny ballads and a lot of mushy stuff. This was apparently meant for the adults. At least, I didn’t see any kids who looked interested”. Across the Atlantic, The Guardian moaned about “the prevailing tone of tweeness” while The Observer grumbled, “I really do not recommend this film for anyone under the age of eighty”.

Not So Fond Memories 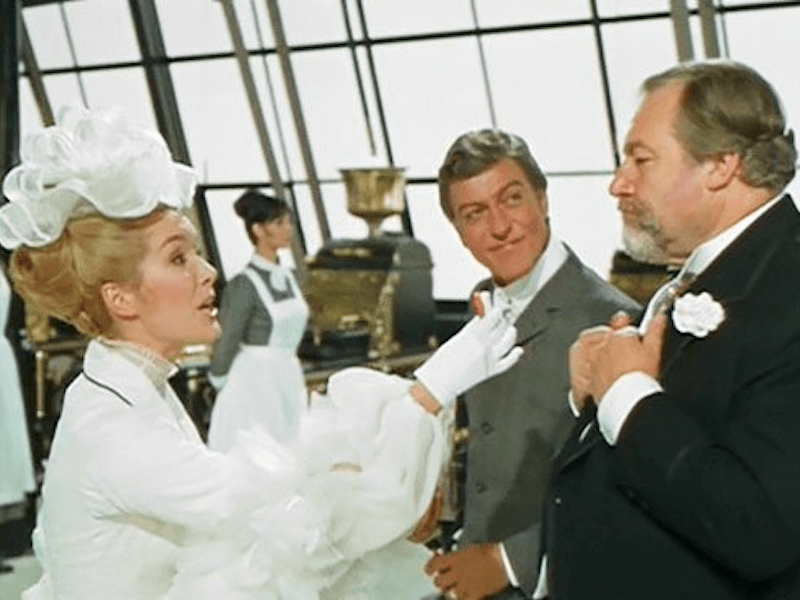 The shoot was not entirely smooth, with disputes between Roald Dahl and the producers regarding the script. He observed, “Once you get a rotten director or an egocentric director, you’re dead. But they pay a lot, so you take the money and run”. The director Ken Hughes was then better known for his film noirs and he later told the press while Chitty made a great deal of money, “that doesn’t really make me feel any better about it”. As for Van Dyke , he believed the film suffered from a lack of “story and substance” but he still drove Chitty Chitty Bang Bang in the 1967 Lord Mayor’s Show. 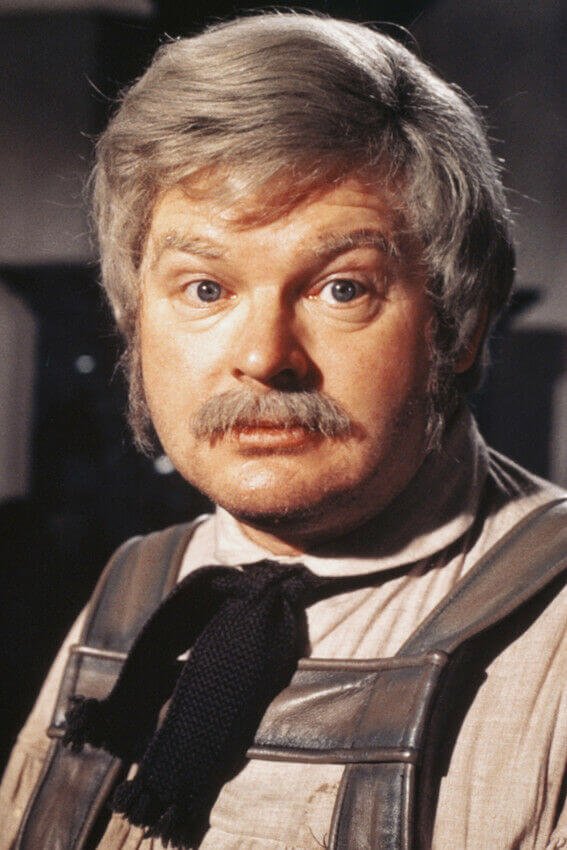 Bob Monkhouse’s cameo role was the victim of the editor’s scissors, as were shots of Phil Collins in the fairground scene. Jeremy Irons is said to have been an extra in the same sequence, while Robert Morley was considered for Lord Scrumptious at one point. Dick Van Dyke requested Benny Hill rewrite some of the script. As well as helping to devise Chitty’s appearance, the great engineer and artist Rowland Emmett created the inventions of Caractacus Potts; Van Dyke’s favourite was the breakfast machine. The principal Chitty Chitty Bang Bang now resides in New Zealand and is the property of the director Peter Jackson. 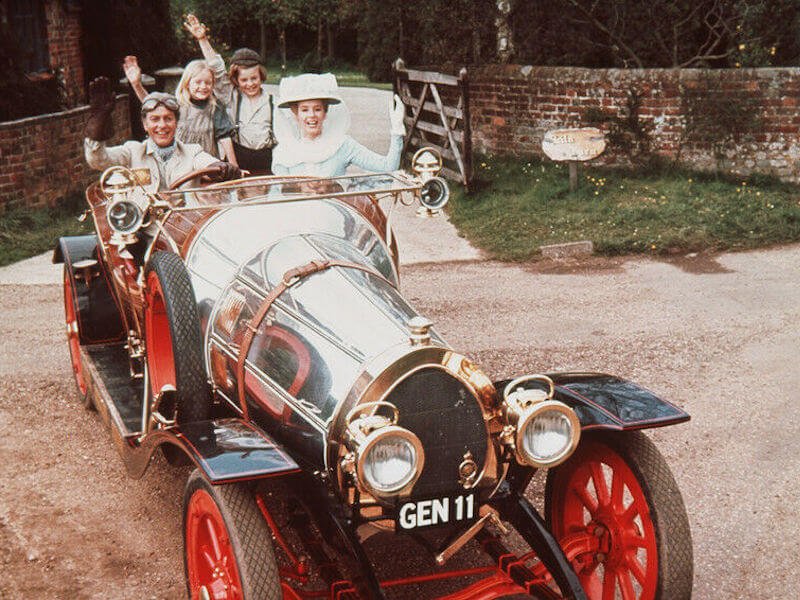 Chitty Chitty Bang Bang went on to become the tenth most popular film at the American box office in 1969, although its budget meant it lost circa  $8 million during its theatrical run. Perhaps its legacy is via the frequent screenings on television during the holidays, with generations able to appreciate the designs of Ken Adam, the music, the cars, Dick Van Dyke’s remarkable dancing and the pitch-perfect acting of Sally Ann Howes. RIP.

Andrew Evanson, Senior Operations Manager for Lancaster Insurance said: “We know that there were six cars produced and one of these was road legal and registered in the UK.  The car has also spawned a number of replicas built over the years including one famously owned by Chris Evans and used extensively at his popular charity CarFest events.  A specialist such as Lancaster Insurance will be happy to arrange an insurance quote for kit or replica car insurance although cover is likely to exclude using it to fly to Vulgaria!”