We take a look back at the iconic film. 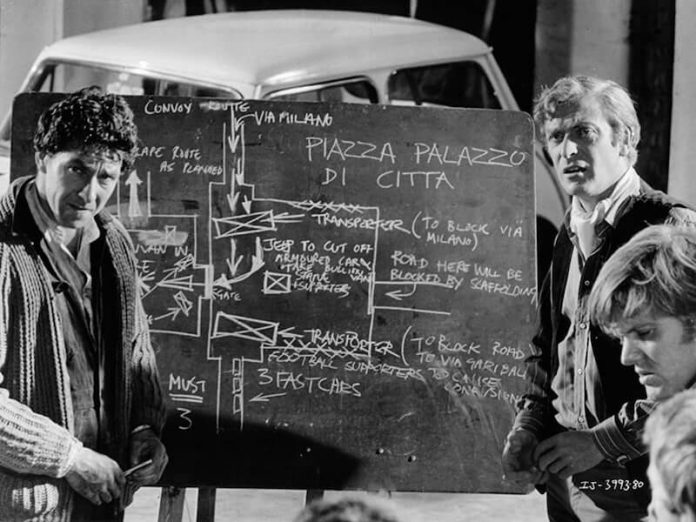 The Italian Job was not the most successful British film of 1969. It was released on the 5th of June and became the 14th most popular cinema feature of that year, with the number one place occupied by Carry On Camping. However, frequent screenings on television created its legacy to the extent that it is now regarded as one of Michael Caine’s most famous pictures.

The Italian Job continues to be essential viewing for motoring enthusiasts around the world. Here our friends at Lancaster Insurance give their ten reasons why.
N.B. Yes, that is Frank ‘Father Jack Hackett’ Kelly as one of the prison warders. 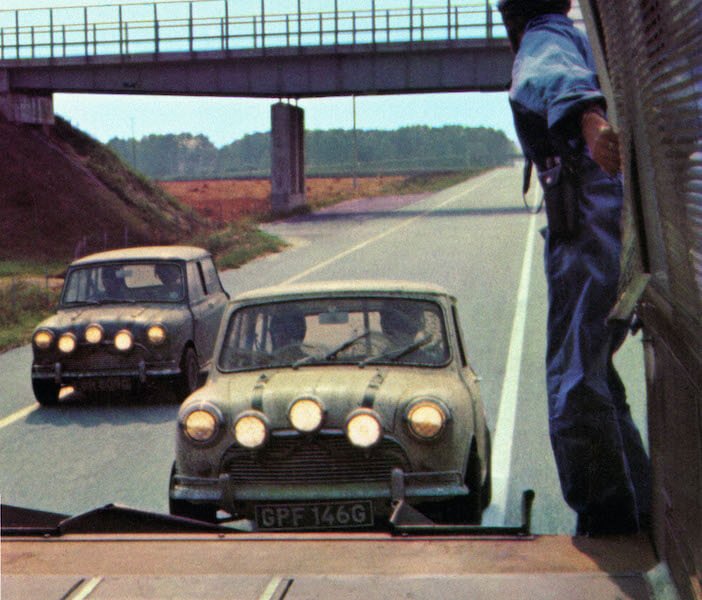 The Austin Mini Cooper S fleet all sport ‘G’ registration suffixes despite sporting an Mk. I grille. The newly formed British Leyland Motor Corporation was only prepared to provide older models to the production, and the six principal Minis finished in standard colours. They were repainted two red, two white and two blue – with Cibie ‘Oscar’ auxiliary lamps enhancing their appearance. In 2008 the producer Michael Deeley complained that BLMC “only agreed to sell us three Minis at trade price and the other 30-odd we bought…we wanted bonnet straps, the big fog lights and all the usual extras, that you see in the picture; they were not interested in anything of that nature”. 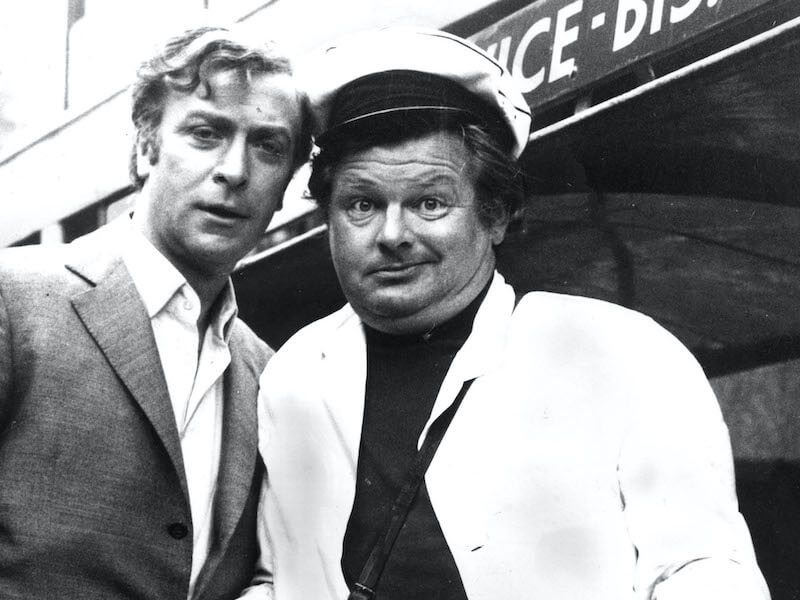 As Paramount backed The Italian Job, the studio chief Robert Evans wanted Robert Redford in the lead while the screenwriter Troy Kennedy Martin saw Nicol Williamson rather than Noël Coward as Mr. Bridger. Benny Hill, a very popular member of the cast, rewrote most of his dialogue and came up with the idea of the Professor’s obsession. Deeley was keen to cast other comics and comedy actors such as Irene Handl and John Le Mesurier, while Simon Dee’s cameo was a quid quo pro for Michael Caine’s appearance on his chat show. Robert Rietti, who played the Police Chief, was also one of British cinema’s finest revoice artists. 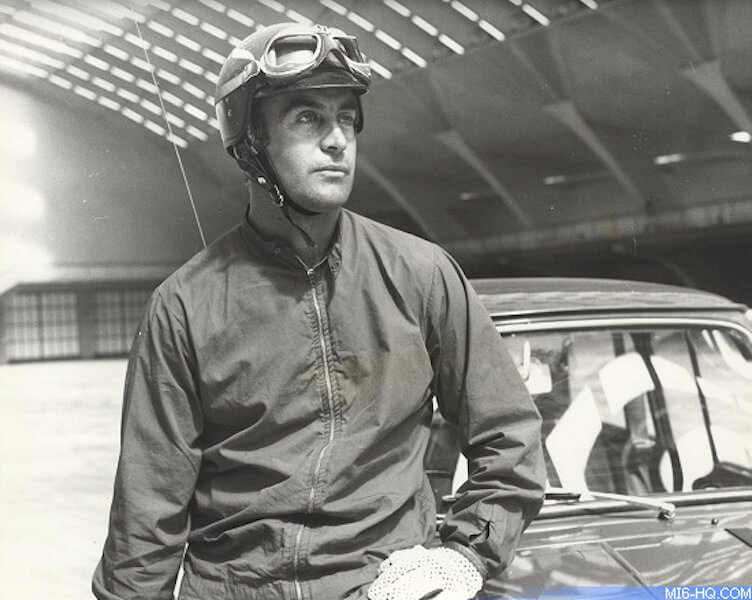 When shooting commenced, Julienne was already a legend for his cinematic stunts; here is some of his early screen work:

He detailed the main alterations to the Minis, including fitting sump guards and stripping their cabins of any fitting that would catch on the stunt driver’s clothes. The crew also removed the back seats. None of the three Mini drivers – David Salamone as ‘Dominic’ in the red Cooper, Barry Cox as ‘Chris’ in the white Cooper and Richard Essame as ‘Tony’ in the blue Cooper  – were professional thespians and their lines were post dubbed by another performer. 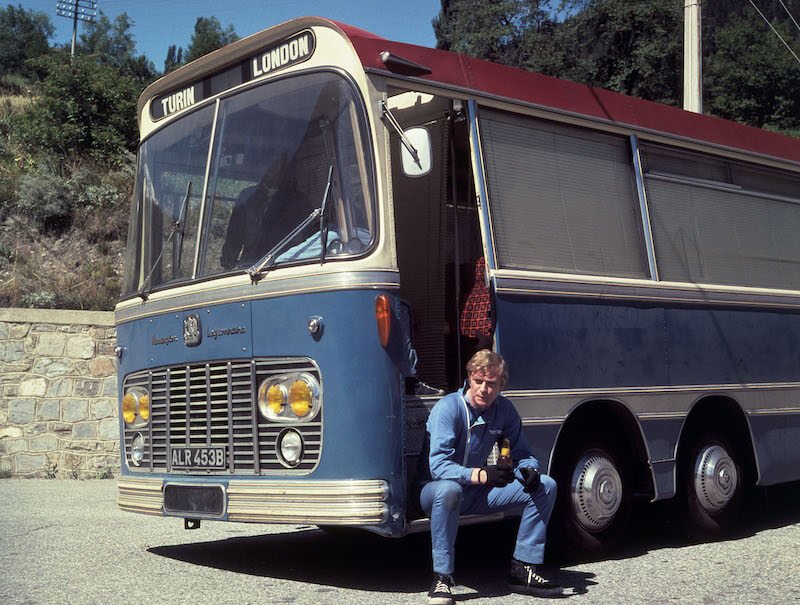 Initially, the filmmakers considered fitting a treadmill inside the coach and believed that the 1964 Bedford VAL 14 Harrington Legionnaire had to be driven slowly for the autostrada scene. Another of their many concerns was the tyres exploding once the cars were aboard. However, Julienne informed them that the first two precautions were unnecessary. Le Patron ordered the front of the Bedford to be reinforced with steel plating, although the driver’s seat was still forced forward by several inches. A pressure cannon was used for the disposal of the Minis while the director Peter Collinson waves the cars aboard the VAL 14. Surprisingly, no one else on location really wanted that role… 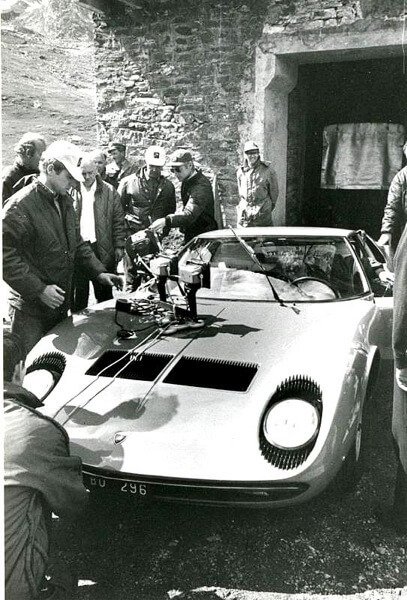 The father of David Salamone owned Blenheim Motors who provided the film with the Thames 400E ‘Dormobile’, the Land-Rover and the Daimler DR450 Limousine. Salamone recently told The Daily Telegraph “we did not have a vehicle transporter, so friends, my girlfriend and my mother were roped in to drive the cars to locations. I had to take one of the Fiat Dinos from Italy to Twickenham, and because I only just made it to the late-night ferry to Dover, I finally arrived in the studio with minutes to spare”. 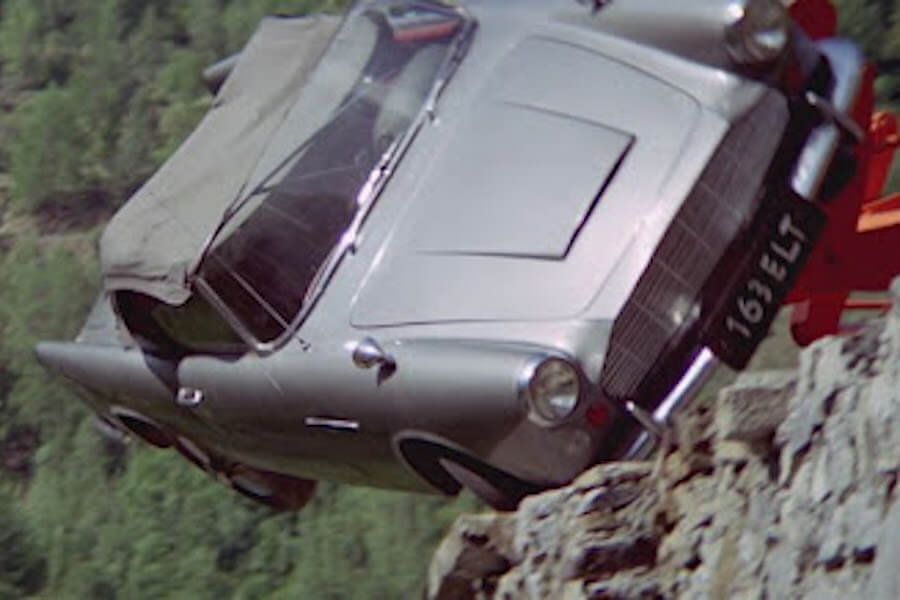 Of the other major automotive stars, Lamborghini’s Enzo Moruzzi doubled for Rossano Brazzi as the Miura P400 sped along the Great St Bernard Pass; the film camera was mounted on the door. The Lamborghini survives, as does one of the two Aston Martins used on screen. Enthusiasts of fine motor cars invariably notice how the ‘DB4’ destroyed by the Mafia is a heavily disguised Lancia Flaminia 3C Cabriolet. The Alfa Romeo Giulias were the archetypal Italian police car of the late ‘sixties, while the three Fiat Dino Coupes were originally red or blue before being painted black for the film. 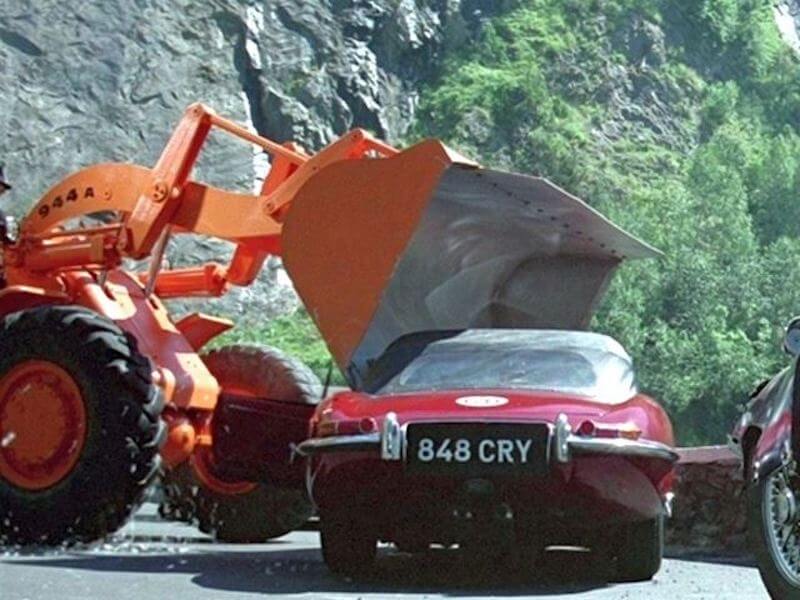 When filming began, Richard Essame owned the E-Type Roadster, which the production company bought from him. 848 CRY was the 12th RHD example to leave Browns Lane. Both it and the Coupe were worth circa £900 at the time, or the price of a new Ford Cortina Super Mk. II, and today many Jaguar devotees find the Mafia confrontation scene hard to watch. They would be even less impressed to learn that Collinson actually took a sledgehammer to one car to intensify the damage. Fortunately, CRY survived filming and is now in the custody of the famous motoring author and publisher Philip Porter.

The Stunts and Locations 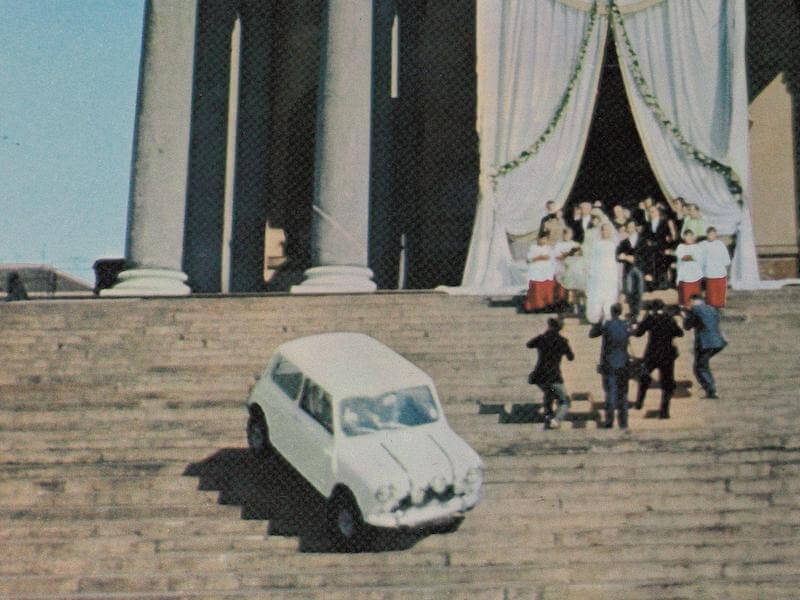 Watching the film now is to marvel at the many achievements of Julienne and his equipage. The wedding party scene lasts for just a few seconds, but the extras were carefully arranged to minimise risk. When negotiating the steps, the Cooper drivers had to maintain a fairly high speed to avoid rolling, nor could they perform an emergency stop. The tunnel chase was staged at the Stoke Aldemoor sewer in Coventry for a fee of £1,000 to the city council. Alas, the condition of the tunnel wall made it impossible for Julienne to complete a 360-degree spin. 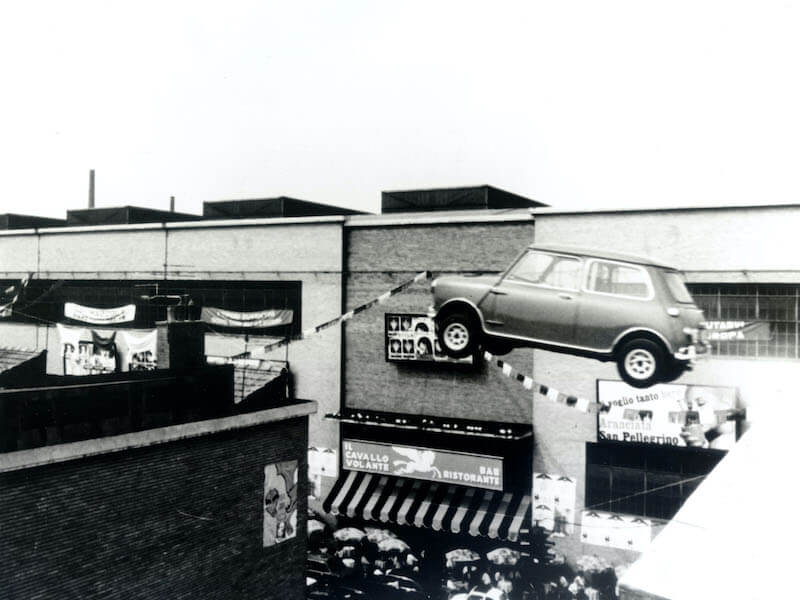 Julienne’s favourite stunt in the film was the jump between Fiat’s Lingotto buildings. It did not feature in the original script, but the great man believed it was possible to have all three Minis simultaneously leap the gap. His challenges were many, for the buildings were 70 feet above the ground and the cars needed to clear 60 feet. Furthermore, the landing point was 12 feet lower than the launching point. The crew placed a lorry filled with polystyrene in the gap between the buildings, and on the day of the stunt, the extras were genuinely fearful for the drivers’ lives. One local cameraman was so terrified he fled the location. 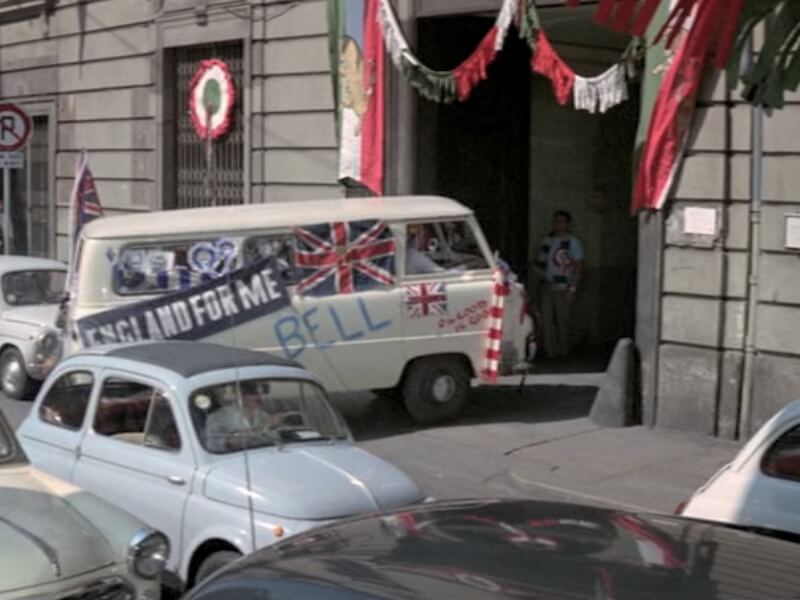 Kennedy Martin had Roger Beckermann driving a silver Iso Grifo rather than a Lamborghini. On location Benny Hill would talk to the waiters in Italian. Frankie Howerd was the second choice for the role of Simon Peach. A scene of Charlie Croker despatching the Professor to Geneva ahead of the gang did not make the final cut due to the running time. The great British Blues singer/songwriter Duffy Power plays the harmonica on Self Preservation Society. Michael Caine could not drive when filming The Italian Job, and the Aston Martin was towed out of the underground car park.

Andrew Evanson, Senior Operations Manager for Lancaster Insurance, said: “Even if not the most successful, The Italian Job is one of the most iconic films of its day, the chase scenes through the streets of Turin are legendary. The film is one I never tire of watching and is full of classic car nostalgia. Whether you own a classic Mini, an Aston Martin like Charlie Croker or an E-Type, a classic specialist like Lancaster Insurance should be your first call to arrange insurance cover. We just hope you take better care of your cars than Michael Caine and his crew did!”