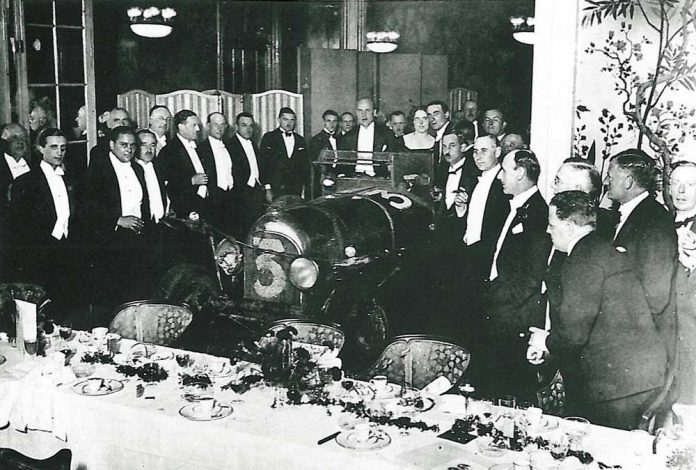 Victory at Le Mans is an unforgettable moment in any driver’s career, and it deserves a special celebration. This one for Bentley was just a bit more special than most…

You might have noticed there was rather a lot of uncertainty around motorsport during the first half of this year. Races were being cancelled and postponed left, right and centre and one of those that fell victim was the Le Mans 24 Hours. It’s now scheduled to take place over the weekend of 19-20 September, and alongside this good news perhaps this is the right time to look back to a rather more opulent era, one where it was deemed perfectly acceptable to drive a dirt-streaked racing car into one of the world’s finest hotels.

The occasion was a celebration of Bentley’s victory in the 1927 race, and there was also a link to the world’s oldest motoring magazine. That race first, though.

Endurance racing always throws up a few surprises, and the Le Mans in question was no exception with Bentley taking victory in the most dramatic of circumstances.

All was going well for the British team until Frenchman, Pierre Tabourin, crashed his Theophile Schneider at White House Corner. Next on the scene was the Bentley driven by Leslie Callingham who went off trying avoid Tabourin’s car, followed by the 3-litre of George Duller who duly joined the carnage. And just to complete the trio the car driven by SCH ‘Sammy’ Davis – shared with noted bacteriologist and BRDC founder, Joseph Dudley Benjafield – then added to the wreckage.

While none of the Bentley drivers were injured, it was only Davis that managed to extricate his badly-damaged car and return to the pits. Suffering from a buckled wheel, bent chassis, and a smashed headlamp temporarily replaced by a lantern roped to the car it was able to re-join the race whereupon Davis and Benjafield set about chasing down the leading Aries driven by Jean Chassagne and Robert Laly (interestingly, Davis and Chassagne had shared a Sunbeam in the 1925 race).

The result was victory by a slightly unbelievable twenty laps, the biggest margin yet seen at La Sarthe, the pair covering 1472 miles at an average speed of 61.4mph.

It was epic win, one that has rightly entered into Le Mans folklore, but it also brings us to surely the only suitable way to celebrate.

On 24 June 1927, five days after taking the chequered flag, the Bentley known as ‘Old No 7’ (although it actually wore the number three for the race) was wheeled through the hallowed doors of The Savoy hotel in London.

With the wheels and wings temporarily removed so it would fit through said doors, it was the first time that a car had ever entered the famous establishment. And the reason for such a dramatic entrance? A dinner to celebrate the achievements of Davis and Benjafield, one that was hosted by The Autocar. The invites were issued by Sir Edward Iliffe CBE, MP for Tamworth and Chairman of then-publisher of the magazine, and given the reputation of the ‘Bentley Boys’ for enjoying life outside of the cockpit it was clear that the lucky invitees were in for a rather raucous evening.

It would begin with the Bentley – still caked in dirt and wearing the battle scars from the White House Corner debacle – being wheeled into the centre of a horseshoe-shaped table where it would remain as guests enjoyed an eleven course dinner.

Depending on the version you read Iliffe is reported to have stood and said: “I feel there is someone missing here this evening who ought to be present”, followed by the car being driven into the room. True or not, it’s rather nice to think that the occasion was befitting of such a dramatic introduction. And while we haven’t been able to confirm the menu enjoyed that night – although rest assured, it was unlikely to have left anyone feeling peckish afterwards – neither do we think the Bentley Boys partook of what is said to have been a favourite tipple, a cocktail of Calvados and Dubonnet created by legendary Savoy barman, Harry Craddock; it seems that wasn’t served at The Savoy until 1930. It sounds a little potent, if rather tempting in today’s difficult times…

Of course, it wasn’t just the redoubtable Sir Edward who shared a link with the magazine.  The racing exploits of Sydney Charles Houghton Davis are legendary, the history books of Le Mans and Brooklands littered with his achievements, but he was also the Sports Editor of The Autocar, often writing under the pen name of Casque. A marvellous storyteller, dinner guests would have been royally entertained. Sadly he was to pass away in 1981 but would he surely would have been gladdened to know that Bentley hadn’t forgotten his famous victory, the company recreating the dinner in 2003 to celebrate the Speed 8’s win in that year’s race. That particular party was attended by Diana Barnato, daughter of Bentley Boy, Woolf.

Times have clearly changed, and when this year’s race does finally take place it is unlikely that any victory celebration will be quite as special as the one that took place more than ninety years ago. But if it were to be, rest assured that we would quite happily get involved. Another cocktail anyone…

Supercar lovers can now place themselves firmly in the driving seat of Ferrari’s latest masterpiece with the new LEGO® Technic™ Ferrari Daytona SP3. This...
- Advertisement -