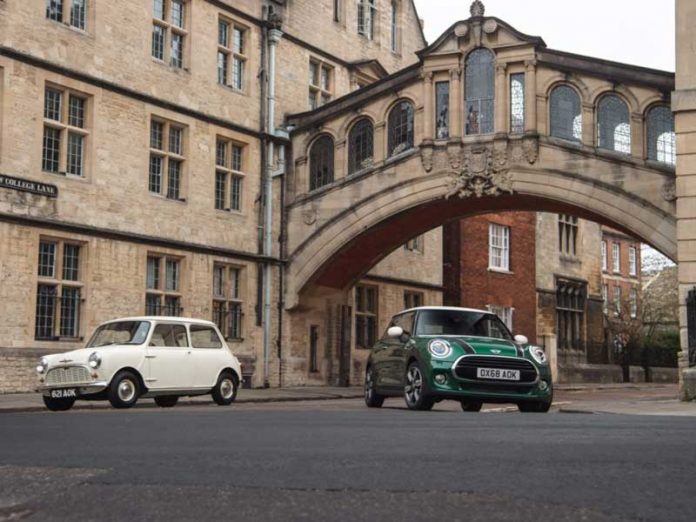 This year, Mini turns 60; and to celebrate, the brand is bringing out some special ’60 Years’ editions of the popular hatchback. The special edition pays homage to the original 1959 Mini, with a classic British racing green paint job and other nostalgic features.

The announcement of this landmark anniversary model means Mini now has 60 years’ worth of history behind it – so today we’re going to briefly take a trip down Mini memory lane. Be prepared for a blast from the past! Under the name Mini Minor, April 1959 saw Morris demonstrate the original Mini to the press. The car was created because of the fuel shortage in 1956 that resulted in petrol being rationed in the UK. Sales of large cars dropped, and small, economic cars, such as the Fiat 500, started to gain popularity. Out of this, the Mini was born. The car featured a transversely mounted engine, which wasn’t traditional at the time. This design choice was intended to improve interior space – and it did just that. The original Mini managed to be surprisingly spacious for its size. Another advantage was that the Mini had amazing go-kart-like handling – a trait that still continues onto the modern-day cars.

The previously mentioned handling characteristics meant that the Mini performed very well in motorsport, most notably the Monte Carlo Rally. Its agility and lightness helped it to be quite the little race car. Even today, classic Minis are still raced.

After its release, the Mini quickly became a success and has since made its way onto our TV and cinema screens, appearing in the likes of The Italian Job, The Bourne Identity and Mr Bean. All this just goes to show how much of an icon this little British car has gone down as in history. Since the Mini’s release, many iterations were made – the original did pretty much stay in production for 40 years after all. The picture above is of 1977 Mini Clubman, which is essentially a facelifted Mini. With the Clubman, an estate version was also introduced. The most unusual Mini, however, might just have to be the Mini Moke – a utility vehicle made for the Britsh army. Unfortunately, the Moke lacked the ground clearance for actual military use and Mokes were sold to the public. Fun fact: Moke is archaic British slang for donkey.

At the end of the original Mini’s life, Rover was building the car – a manufacturer owned by BMW at this point. In March 2000, Rover was suffering and taking massive losses, which is when BMW decided to sell most of the companies. However, they kept the Mini name and planned a replacement for the future. The last original Mini was produced in October of 2000. In late 2000, the new Mini Hatch was introduced by BMW, just after the original was discontinued. Despite not staying completely true to its roots, the Mini Hatch enjoyed vast amounts of success. Sure, today’s iteration has grown in size since 1959, but things like the go-kart handling have been carried over, making the new Mini still a very loveable little car.