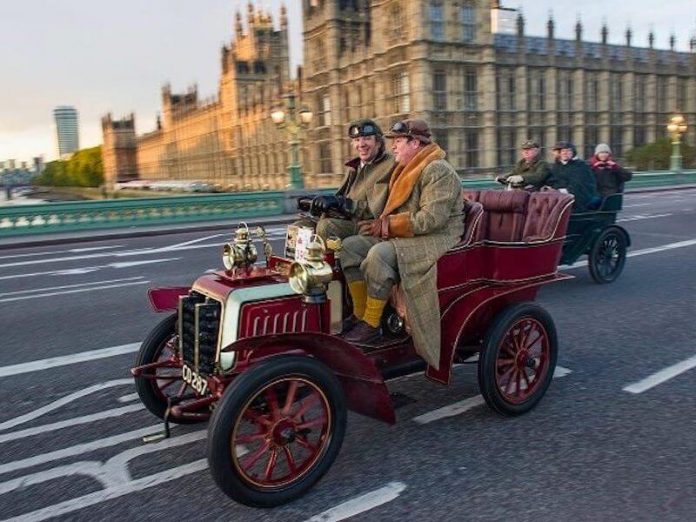 Almost two hundred classics have been through the Wheeler Dealers workshop, but to celebrate the 100th episode something a bit special was needed. Enter the oldest car ever to appear on the show – a 1903 Darracq.

Borrowed from the Haynes International Motor Museum, the plan was to get it into perfect shape before driving it in the famous London to Brighton Veteran Car Run.

With the clock ticking Edd’s first job was to ensure the cooling system was in tip-top condition, so the water pump was rebuilt, the radiator overhauled, new hoses fitted and then a top-up with waterless coolant. The aging wooden wheels needed attention, so Mike paid a visit to master wheelwrights, Mike and Greg Rowland, for them to work their magic.

Finally, this amazing old car was treated to a 21st century upgrade with Edd temporarily replacing the innards of the original oil lamps with 3D-printed inserts for modern bulbs. After a bit of practice the boys were ready for the road, and after a huge effort they made it to the finish line in Brighton. What a result, and what an episode!

At this point we’d normally be finding out what happened to the car after it was bought by a new owner, but in this case it has belonged to the museum for twenty five years.

Acquired in 1996 having been purchased at auction, it was chosen as an excellent example of an early internal combustion car. A superb way to demonstrate how cars have changed over the last one hundred and twenty years or so, it also has an interesting history; first registered on 5 October 1904 to Gordon Scott who lived in Brighton, by 1943 it was discovered in a scrapyard in West Bromwich.

After buying the Darracq for £15 the next owner undertook a restoration before running it for the next half century, at which point it became part of the museum’s treasured collection. Stripped and re-built before going on display, it has since been entered in a number of London to Brighton runs, including 2013 when it was used by Mike and Edd.

Carefully prepared in the museum’s own workshop before every event – including a thorough check of the wheels by those skilled wheelwrights – it always draws plenty of attention whenever it’s out on the road. It’s no wonder the museum has no plans to part with it, which means we can all enjoy this wonderful veteran.

In fact, it’s due to take part in the famous car run this year – it’s celebrating its 125th anniversary – but before that the car will be running in the paddock at the museum later in October. It’ll be a great opportunity to admire this star of Wheeler Dealers.

Mike Brewer remembers: “It’s a once-in-a-lifetime chance to take a car from a museum display and get it into the Wheeler Dealers Workshop for us to fettle with. When the chance of the Durracq came up, I knew we had to go for it. It was great way to celebrate our 100th show and have a massive adventure together.

“I remember on the London to Brighton run when we approached the steep hill, there were cars rolling backwards, some broken down, and many overheating. However, both Edd and I ploughed on but as the vehicle got slower towards the top of the hill, I took the option to abandon ship!

“Lightening the load helped the Durracq but even that wasn’t enough and ultimately Edd had to step outside as well. Once we made the top, it was almost like we’d won the event we were so happy. I remember how emotional it was crossing the finishing line at Brighton’s Madeira Drive. What an adventure and one I will never forget. I’d love to do the London to Brighton again but maybe next time in something a bit more modern.”

The Darracq’s wheels get some expert attention