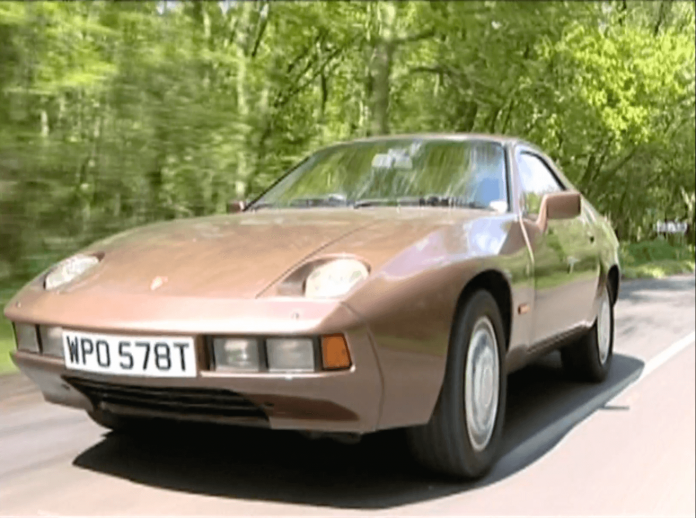 Wheeler Dealer Mike Brewer and mechanic Edd China tackled their second Porsche in the programme’s history but this time, it is the 928.

Billed as a ‘budget supercar’, Mike was on a mission to find and restore one for £3000. He found a Porsche 928 that has stood idle for years, no service history, no MOT, and is a non-runner in brown – so of course Mike brought it! Not only did it have a full body respray to the original Cocoa colour, but Edd also had to replace the headlight switch and all four brake calipers and pads. He also fitted a new battery, changed the engine oil and oil filter, repaired dents on driver’s side door and rear wing. The gaudy aftermarket BBS rims were changed to refurbished factory ‘tele-dial’ rims with new tyres in a straight swap. It was sold for the full asking price with a full tank of petrol.

That same jubilant smile that Mike had on his face in 2005 I had on mine in 2019, Mike on a country road in the UK while I was on the Wild Atlantic Way in the South-West of Ireland.

I bought the Porsche from a gentleman in Dublin in May 2019. He had it advertised in the UK as the car made famous by Wheeler Dealers Mike and Edd. Of course I watched the 2005 Wheeler Dealers episodes again before I drove four hours to view the car. It still had the teledials that Mike negotiated; the headlamps still worked perfectly; and it still wore the Wheeler Dealers paint job. The front brakes needed work, as did the passenger door-lock. I picked up the car, repaired, two weeks later, and on the 200-mile drive from Dublin to Tralee I was as ‘completely and utterly bowled over’ as Mike was in 2005. I have never driven a car with such wonderful, deft handling. I have the rich history of the car in front of me. Paradoxically, it has done so few miles because it has travelled continents. It was originally exported to Hong Kong, straight from the Stuttgart factory. Then to the UK, where it was idle for four years before Mike bought it for a song in March 2005. The car came to Ireland in 2009. The letter from Discovery Channel is among the documents in the history file—along with a slew of receipts, displaying the cost of maintaining a—low-mileage—supercar. Let’s face it: the 928 is an over-engineered car, even the early ones with the K-Jetronic CIS. I have added some bills to the file: smog pump, ignition switch, rear wiper motor, timing belt, water pump, heater blower switch, door locks. I even installed a spanking new Blaupunkt Bremen DAB radio. I could never be so confident about the car without the KVVCCC (Kerry Vintage Vehicle and Classic Car Club). Their help and advice is invaluable. There’s one other 928 in the club, but several members have worked on 928s, and they ooze expertise. You’ll be amazed how many people recognise ‘the Wheeler Dealers car. Cool!’—that’s the typical response I get from mechanics, Porsche afficionados, and vintage car nuts alike. It helps that I have the original series 928 sticker in the rear window, and the British plate in the boot, but it does go to show how closely viewers watch the programme (close enough to note that sticker). ‘The Wheeler Dealer car’ opens garage doors. I’m fortunate to have an excellent mechanic in Curraheen, here in the West of Ireland. He prepared the car for me last year and when he drove it home with me, along the Wild Atlantic Way, he said: ‘that is a big, big grin you have on your face.’ Mike knows that smile. I loved that car and would exchange a body part to have it back! 928 Porsches are on the ascent and climbing fast. I can remember back then when we swapped the wheels there was an uproar online after, but I knew that originality is where the market was heading. The one cock-up was during the final piece of filming, the director told us to “lean against the car” for the final sign off to the show. The paint was fresh and I knew it would get damaged, but the director insisted and the stud on my Levis jeans scratched a nice gouge into that fresh paint! It had to go back and be repaired… so I’ve never listened to the director saying that again!