Wheeler Dealers Mike Brewer and mechanic Edd China tackled a proper super saloon in the form of the BMW M5.

The BMW M5 was one of Mike and Edd’s favourite all-time drivers and is all about power, speed and performance. A motor that keeps its talents hidden very well according to Mr Brewer.

With showrooms asking for £60,000 for an M5, good used models were coming in at under £10,000 which made them perfect for the Wheeler Dealers. However, to turn a profit, Mike only wanted to spend £5,000 which made finding the right car even harder.

Luckily, Mike spotted one on a website for bang on the budget but after viewing it, could see there was plenty of work to do if the awesome BMW M5 was to be back to its best.

On the outside that meant repairing and re-painting the damaged bonnet and refurbishing the alloy wheels. New front strut top mounts cured the squeaky suspension, an overhaul by Edd fixed the noisy alternator, and fresh air filters were fitted, too.

I collected the BMW M5 in December 2014, and it was a pick-me-up after my father passed away. I’d always wanted one since seeing them at a motor show.

I brought it from a guy in Surrey and recognised the car but couldn’t think where from until the day I picked it up. That’s when the penny dropped! I couldn’t believe I had just brought the Wheeler Dealer M5! I remember looking forward to that episode as it was my dream car and I loved the colour, but I never thought I would actually own that exact car.

In my ownership, along with regular servicing, it’s had the bumpers, sills and wheels repainted and all suspension parts replaced. Also, new wheel bearings, brake discs and pads, water pump, the rear subframe reinforced (after I broke it!), rear silencers removed, new clutch and flywheel, lots of tyres, a new steering wheel, and new thermostat. And I am currently waiting to fit a new alternator and a splitter. 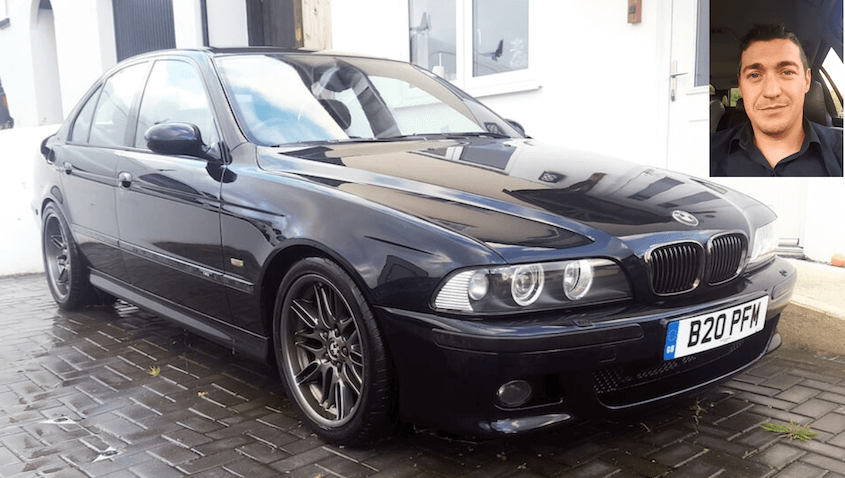 Ownership has been a dream, costs aside. The car is amazing and everything I had ever hoped for. It’s easy to drive, comfortable and spacious… then you turn off the traction control and hit the sport button and she’s a loon – fast, handles like a dream and sounds amazing.

I’ve taken her drifting, drag racing at Santa Pod and even had her dyno-tested (a damaged MAF sensor meant she wasn’t running properly but she still produced 411.1bhp) and I regularly attend some amazing car meets. A lot of people acknowledge her and quite a few know her from the show. Any time there’s a repeat of the show I get hundreds of tags and messages letting me know.

In all it’s been a great experience and I can’t see myself ever parting with the car. It was my dream car, and due to the fact it’s lived up to that dream, it’s the Wheeler Dealers BMW M5 and in a way the last gift from my Dad, she’s become my most prized possession.

Mike Brewer remembers:
The final test drive was at RAF Bruntingthorpe. We pounded the car up and down the airfield all day and it never missed a beat. We had a data logger onboard and we set a speed of 175mph, impressive for an old saloon car!

Once the work was done for the day, I climbed into the Bentley GT Speed I was driving. Now bear in mind I’d been doing 175mph all afternoon so speed wasn’t an issue. I waved goodbye to the crew and planted my foot to the floor. The Bentley lifted her skirt and pelted to the horizon. I glanced down at 205mph and backed off. Still the fastest I’ve ever been.

Pass the wrench and leave it to me: AA Patroller and Austin Allegro owner Alex Phillips is the woman to call when your car...
- Advertisement -