Celebrating 110th anniversary, 500 Bugatti Baby models will be made 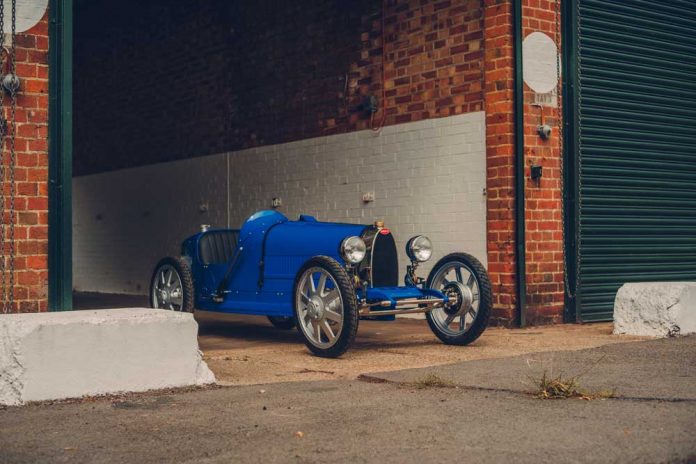 It was back at the 2019 Geneva International Motor Show when Bugatti announced that it had decided to give itself a 110th birthday present, and it came in the form of a reimagining of the famous Bugatti Baby. Just 500 will be made, and production has now begun. The Bugatti Baby story dates back to 1926 when Ettore and his son Jean built a scaled down version of the Type 35 for Ettore’s four-year old son, Roland. Built to fifty percent scale, it was intended to be unique although such was its popularity that a number were made between 1927 and 1936. The new Baby – which is constructed to seventy five per cent scale and aimed at those aged fourteen and above – is available in three versions. Base costs from €30,000 and features a composite body and 1.4kWh battery pack. The Vitesse uses a carbon-fibre body, larger 2.8kWh battery pack, and costs from €43,500. The costliest version is the Pur Sang with hand-formed aluminium bodywork which takes more than 200 hours to make – that one will set you back €58,500.

All versions are rear-wheel drive and feature a limited-slip differential, hydraulic brakes, selectable driving modes and adjustable dampers. The Base version has two modes – Novice is limited to 12mph and 1kW of power, while Expert allows 30mph and 4kW. The Vitesse and Pur Sang have the same modes but their upgraded powertrain and ‘Speed Key’ enable up to 10kW of power for a top speed of 42mph and 0-37.5mph in six seconds. All versions use a lithium-ion battery which, with regenerative braking, allows a range of up to 25km – this increases to 50km when the larger battery is fitted. If all this isn’t enough, younger drivers will find plenty more too appreciate. The instruments are faithful replicas of those fitted to the original Type 35, and are mounted in a dashboard fashioned from rather gorgeous turned aluminium. There are also LED headlights, a quick-release steering wheel and adjustable pedals. Finally, all owners will receive membership of the Little Car Club as well as the Bugatti Owners’ Club.