Car found after years in storage as a non-running example. 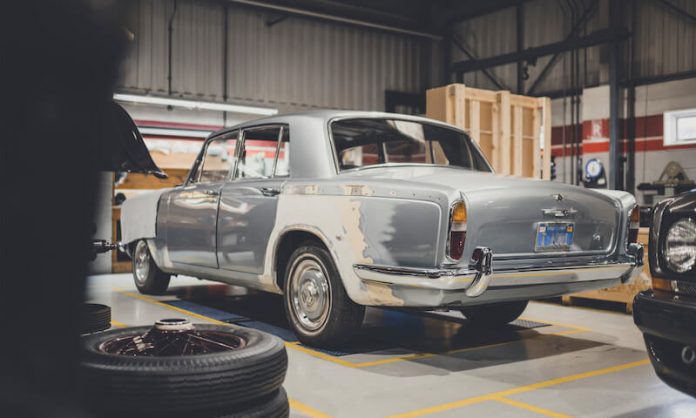 After decades of being off the road and in storage, the very first Bentley T-Series is being brought back to life after the start of a complete wheels-up restoration. The 6¼-litre pushrod V8 has been started for the first time in at least 15 years, and the engine and gearbox have proven to be in good condition despite their extended rest.

The oldest Bentley T-Series completed manufacture on the 28 September 1965. Owned by Bentley Motors and destined for trials work around the world, the T-Series was finished in Shell Grey exterior paint and complemented with a Blue Leather interior. 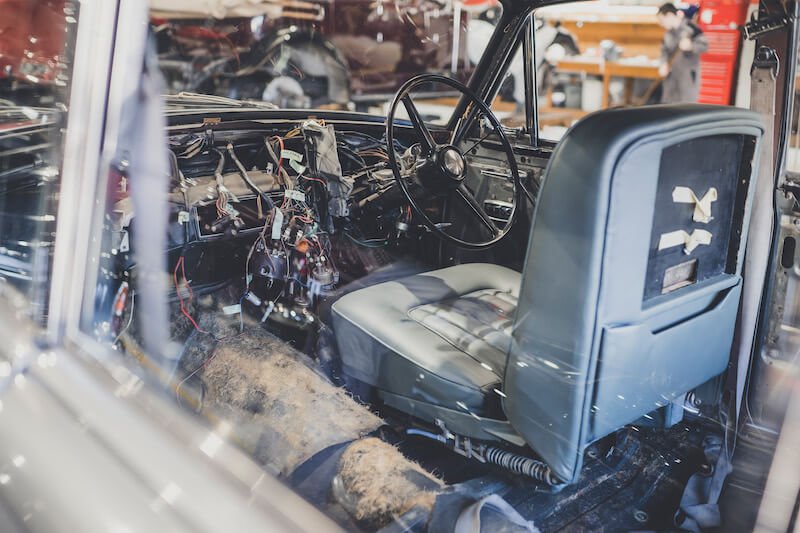 After a restoration project slated to take at least 18 months and that will return the car to outstanding condition, it will be added to Bentley’s expanding Heritage Collection of road-going cars that together describe all 103 years of Bentley’s history.

The Bentley T-Series was originally announced and displayed for the first time at the Paris Motor Show on 5 October 1965 and was significantly different from its predecessor, the S-Type. Notably, the T-Series was the first Bentley to use a unitary construction method, using a monocoque in place of the separate chassis and body technique of every Bentley before it. 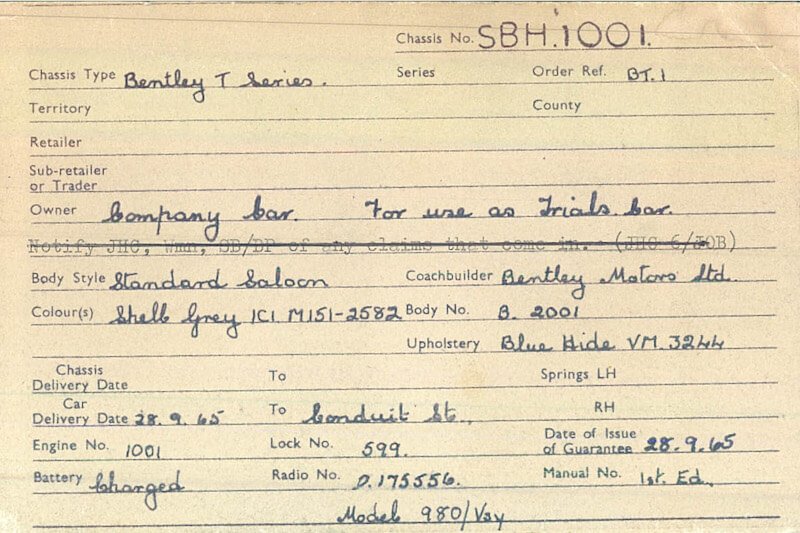 The 225 bhp, 6¼-litre V8 was originally designed and introduced in 1959 in the Bentley S2. At the time the engine achieved the highest specific output by weight of any production car in the world of 2.7 lb/hp (1.2 kg/hp). The engine was considered over-engineered at the time, but its inherent strength, reliability and development potential led to it becoming Bentley’s mainstay engine for the next 50 years. By the time the engine was retired in 2019, it was delivering more than double the amount of power and three times the original torque whilst producing 99 per cent fewer emissions. 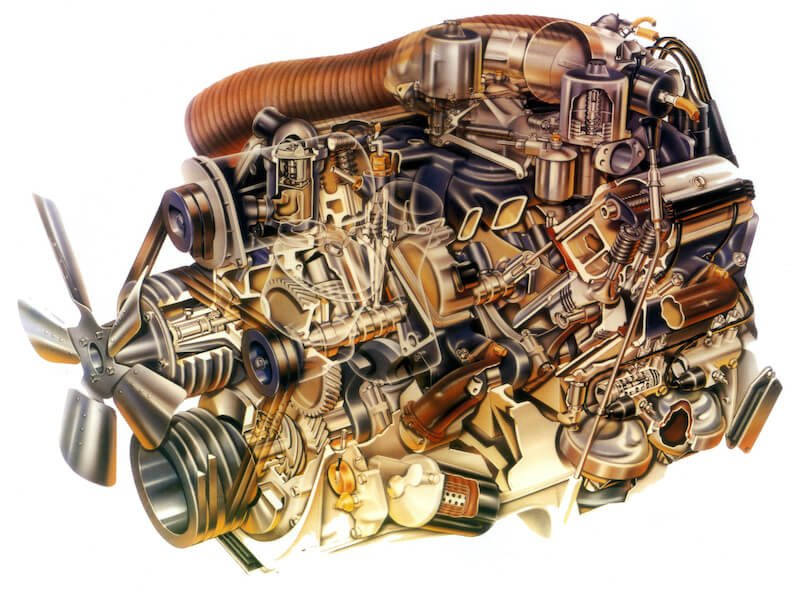 In October 2016, a group of apprentices started the rejuvenation process for T-Series VIN 001. Starting with the removal of trim and the reconditioning of the Body-in-White, the T-Series started its journey to return to active duty. After initial preparations the work was put on hold whilst the introduction of the current product range and future electrification activities became more of a priority – but with renewed attention on developing the Heritage Collection, the car is now on course to make its return.

In 1958, work began designing the first monocoque Bentley. Bentley was known for coachbuilt bodies underpinned by a separate chassis but customer expectations and requirements were changing at a time where the coachbuilding trade was also declining. Customers wanted their Bentleys to be externally smaller but maintain the space, luxury and comfort they had come to expect. 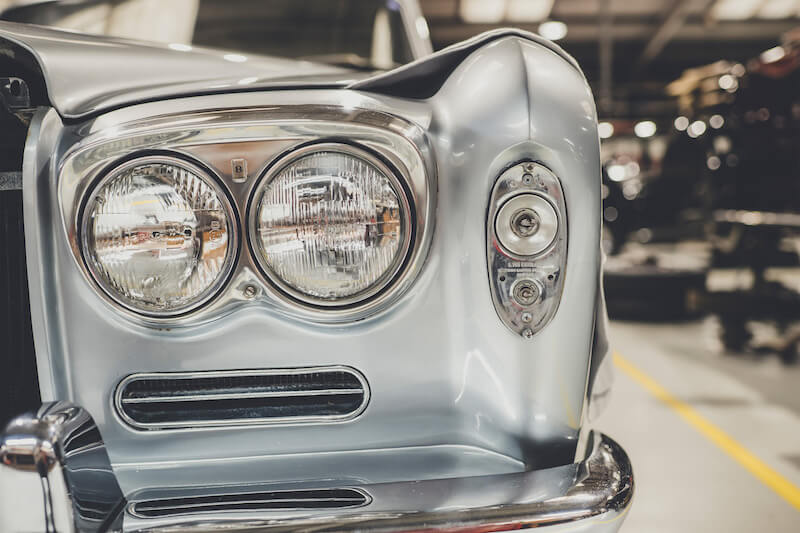 By 1962, John Blatchley – famous for styling the R-Type Continental – had completed a new exterior design for a steel and aluminium monocoque body. The design improved on the passenger space of the preceding S3, but with the overall car now seven inches shorter, five inches lower and three and a half inches narrower. Overall cabin space was increased and a bigger boot provided more capacity for luggage. 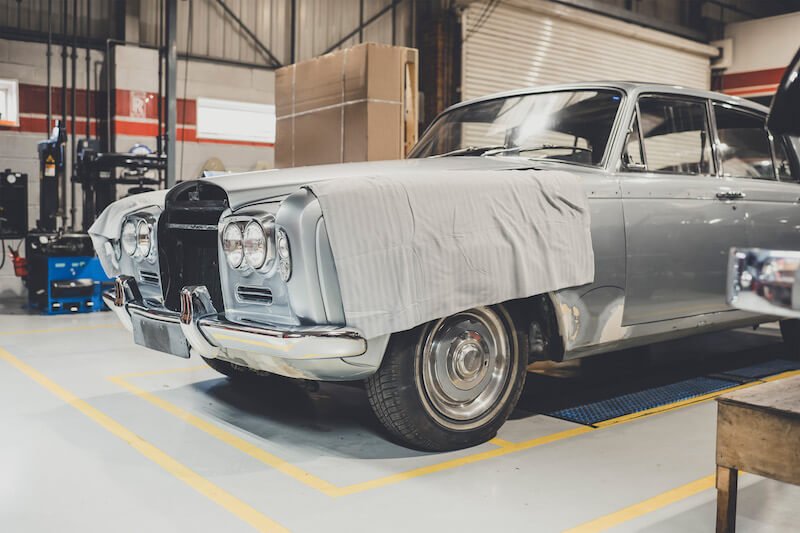 The T-Series had an advanced chassis with independent suspension on all four wheels with automatic height control according to loading. Pressure for the self levelling suspension came from the triplicate hydraulic braking system which had disc brakes on all four wheels. The suspension comprised of double wishbones and coil springs at the front and semi-trailing arms at the rear.

The Bentley T-Series was hailed as a clear example of revolutionary engineering given it was the first Bentley to move away from a separate chassis build, and tis relatively lightweight construction gave impressive performance for a four-sedan in 1965, with a maximum speed of 115 mph and 0-62 mph achieved in 10.9 seconds. 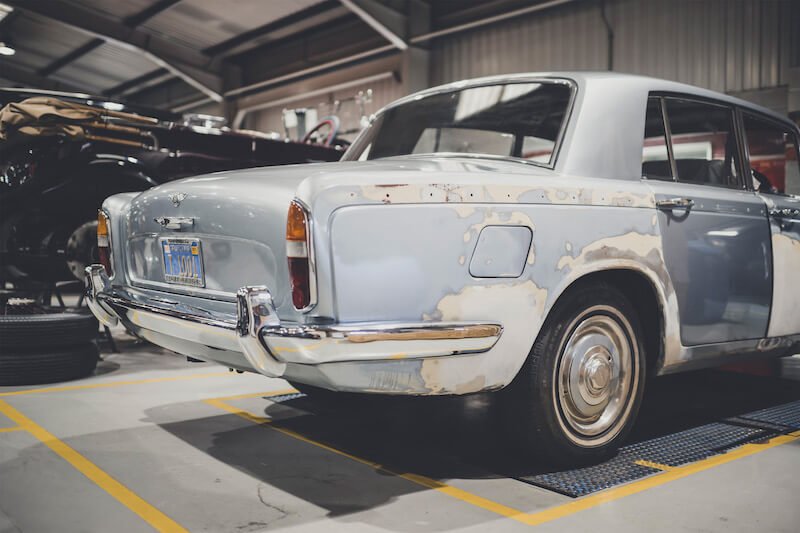 1,868 examples of the first-generation T-Series were produced, with a pre-tax list price of £5,425 and the majority being standard four-door saloons. A two-door version was created in 1966, and a year later a convertible version was launched, although production numbers were kept low at just 41 cars. A second-generation car, known as the T2, was launch in 1977 and stayed in production until 1980.