Auto NewsHot Audi A3 models land in the UK

Hot Audi A3 models land in the UK 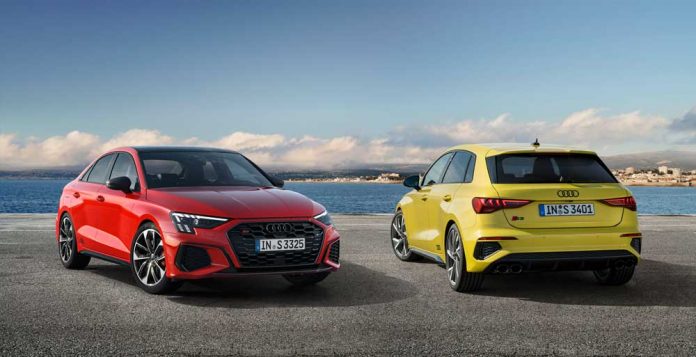 Impressively extensive though Audi’s A3 range is what’s been lacking until now is a hot, range-topping variant, but that’s now been corrected. The S3, available in Sportback or Saloon body styles, is now available to order in the UK with first deliveries expected in the autumn. The important stuff first, then. Powering the new model is a turbocharged 2.0TFSI engine producing 306bhp and 400Nm of torque, with drive delivered to all four wheels via a 7-speed S tronic dual-clutch transmission. Slight increase in torque aside those numbers match the previous version, resulting in a 0-62mph time of 4.8 seconds and top speed limited to 155mph. Audi claim up to 39.2mpg and 178g/km CO2 emissions under the WLTP test regime, although anyone making use of the firepower on offer is unlikely to match that former figure.

A new Modular Dynamic Handling Control is responsible for overseeing the apportioning of torque between the front and rear axles, while the sport suspension drops the S3 by 15mm compared to regular models and features Comfort and Dynamic settings. The more comprehensively equipped Vorsprung variant that arrives later in the year will get adaptive dampers, with 19-inch wheels replacing the 18-inchers fitted to standard S3s.

Externally, the S3 gets all the usual performance Audi styling cues. The traditional aluminium door mirror surrounds are present and correct, while the prominent rear diffuser and quad tailpipes further distance the new model from the rest of the A3 range. LED headlights are standard, with Vorsprung versions getting Matrix LED units instead. Sportback and Saloon models grow by three and four centimetres in length respectively, improving cabin space, while luggage capacity is 370 litres in the saloon and from 325-1145 litres in the more practical Sportback.

Clamber into the new model and you’ll be presented with Audi’s usual fastidious attention to build and material quality. Standard kit includes news sports seats trimmed in Nappa leather, a 10.1-inch touchscreen infotainment display for the MMI system and the configurable Audi Virtual Cockpit instrument display. Apple CarPlay and Android Auto are standard, too, with the Vorsprung adding wireless phone charging via the Audi Phone Box. Those models will also get Audi Virtual Cockpit Plus featuring a larger 12.3-inch display.

Prices for the Sportback start from £37,900 with the Saloon kicking off at £38,465, and you can expect a notable premium for Vorsprung models.